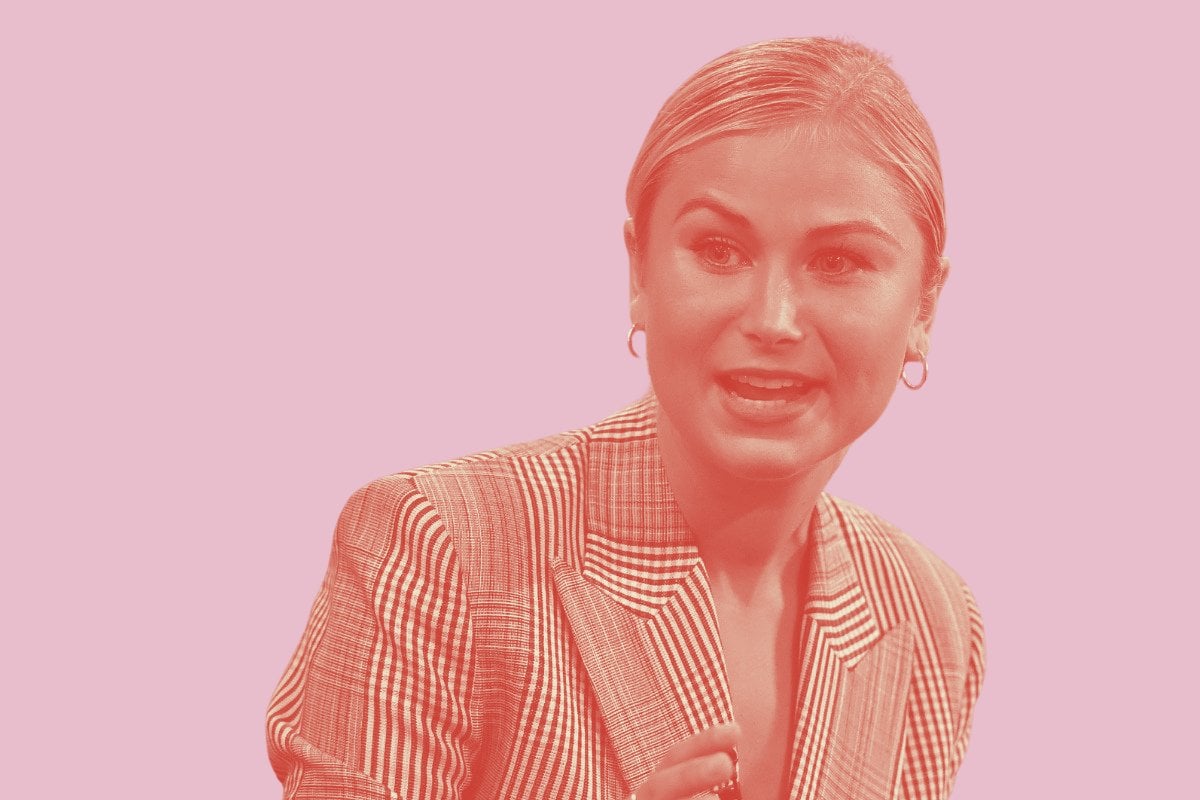 Warning: The following deals with details of child sexual abuse and rape.

For years, Tasmanian woman Grace Tame was legally gagged from telling her story of surviving child sexual abuse. Forced to sit in silence, while the abuser — her Year 9 teacher — publicly described his crimes as "awesome" and appealed for sympathy for all the things he'd lost as a result of the case against him.

After a concerted campaign spearheaded by journalist Nina Funnell, the state law preventing survivors from identifying themselves in the media was scrapped in April 2020. That effort is called #LetHerSpeak, and that's precisely what Grace has been doing ever since.

That advocacy saw her named 2021 Australian of the Year, and today, saw her command the lectern at the National Press Club in a searing address about her mission to end child sexual abuse.

Watch: Grace Tame on the power of survivors' stories.

These are some of the most powerful moments from her speech.

1. The importance of survivors' stories.

"It is so important for our nation, the whole world, in fact, to listen to survivors' stories. Whilst they're disturbing to hear, the reality of what goes on behind closed doors is more so. And the more details we omit for fear of disturbance, the more we soften these crimes, the more we shield perpetrators from the shame that is resultantly misdirected to their targets.

"When we share, we heal, reconnect, and grow, both as individuals and as a united, strengthened collective. History, lived experience, the whole truth, unsanitised, and unedited, is our greatest learning resource. It is what informs social and structural change."

Grace Tame’s story is so powerful but so too is listening to the voices of the female journalists in the room crack with emotion upon hearing her tell it. Every woman feels this deeply. We are tired and we are angry and so many are traumatised. This has to be a turning point.

"On average, it takes 23.9 years for survivors of child sexual abuse to be able to speak about their experiences. Such is the success of predators at instilling fear and self-doubt in the minds of their targets. More so than they are masters of destroying our trust in others, perpetrators are masters of destroying our trust in our own judgement. In ourselves. Such is the power of shame.

"A power, though, that is no match for love. When I disclosed my abuse to another of my teachers, Dr William Simon, his absolute belief in me was the only assurance I needed to tell the police. It helped me recover a little of my lost faith in humanity."

Grace Tame: What an amazing shot of strength and empowerment to all of us - at a time when we need it more than ever 💚

3. The illustration of grooming behaviour.

Part of Grace's proposed path to ending child sexual abuse is better awareness of and education about grooming behaviours. In her address, she used her experience to illustrate the six phases it typically follows.

Targeting. "I was anorexic, with significant change happening at home."

Gaining trust. "[I thought he was] listening to my challenges, empathising with my situation, and providing me a safe space to retreat to when I needed it."

Filling a need. "Although I was surrounded by an incredibly attentive family and team of medical professionals, most of their support came in the form of tough love. The teacher thus assumed the role of sympathiser, telling me what I wanted to hear."

Isolating. "This involves pushing certain people away, but exploiting others... It wasn't until many years later I questioned why [my history teacher] and other staff would take me to [the abuser] when I was upset, staff he privately mocked and referred to as 'the menopausal virgins club'. He must have told them."

Sexualising. "In conjunction with subtly explicit conversation, I was carefully exposed to material that glorified relationships between characters with significant age differences. There was one film in particular he made me watch called The Prime of Miss Jean Brodie, the last line of which is: 'Give me a girl at an impressible age, and she is mine for life'."

Maintaining control. "At six foot, he towered above me. He once told me a story about a friend of his who sought revenge on a woman by digging her eyes out with a spoon. He told me he killed people as a soldier. He'd also sit outside on my street at night in his car, to watch me undress through the window. I was already embarrassed by my shape as a young teenager in eating-disorder recovery. I remember standing naked behind his desk after he had just raped me, and asking him if he thought I was fat. He looked me up and down and said, 'You could do with some more exercise'. Like I was a dog. But he also told me I was beautiful."

In recent weeks we have seen some incredible women stand up against sexual harassment and assault, women in politics, women in the media,women who have spoken about their own traumas, women everywhere.
Thankyou Grace Tame ...you may well be our saving grace.

"Since I was announced as Australian of the Year just over a month ago, hundreds of fellow child sexual abuse survivors have reached out to me to tell their stories. To cry with me. Stories they thought they would take with them to the grave, out of shame for being subjected to something that was not their fault. Stories of a kind of suffering they had previously never been able to explain. Stories of grooming.

"I am one of the luckiest ones. Who survived, who was believed, who was surrounded by love. And what this shows me is that despite this problem still existing, and despite a personal history of trauma that is still ongoing, it is possible to heal, to thrive, and live a wonderful life. It is my mission and my duty as a survivor and as a survivor with a voice to continue working towards eradicating child sexual abuse. I won't stop until it does."

5. Her rebuke of the Prime Minister.

In February, former Liberal staffer Brittany Higgins went public with allegations that she was raped by a colleague within the walls of Parliament House. She claimed that in the wake of the 2019 assault, she was pressured by her superiors to choose between keeping her job and taking the allegation to police.

When Prime Minister Scott Morrison last week fronted the media to respond, he uttered the now-infamous line: "[My wife] Jenny and I spoke last night, and she said to me, 'You have to think about this as a father first. What would you want to happen if it were our girls?'"

In the Q&A after her address, Grace Tame was asked what she made of this rhetoric.

“It shouldn't take having children to have a conscience.” - Australian of the Year Grace Tame was asked what she thought of Scott Morrison’s use of the phrase “as a father”, referring to a chat he had with wife Jenny, when he responded to allegations by Brittany Higgins #abc730 pic.twitter.com/wlbcjRrGPR

She paused for a moment, toward the microphone and said, "It shouldn’t take having children to have a conscience."

Leaning closer still, "And, actually, on top of that, having children doesn’t guarantee a conscience."

As she sipped a glass of water, the room broke into applause.

If this post brings up any issues for you, or if you just feel like you need to speak to someone, please call 1800 RESPECT  on 1800 737 732. It doesn’t matter where you live, they will take your call and, if need be, refer you to a service closer to home.