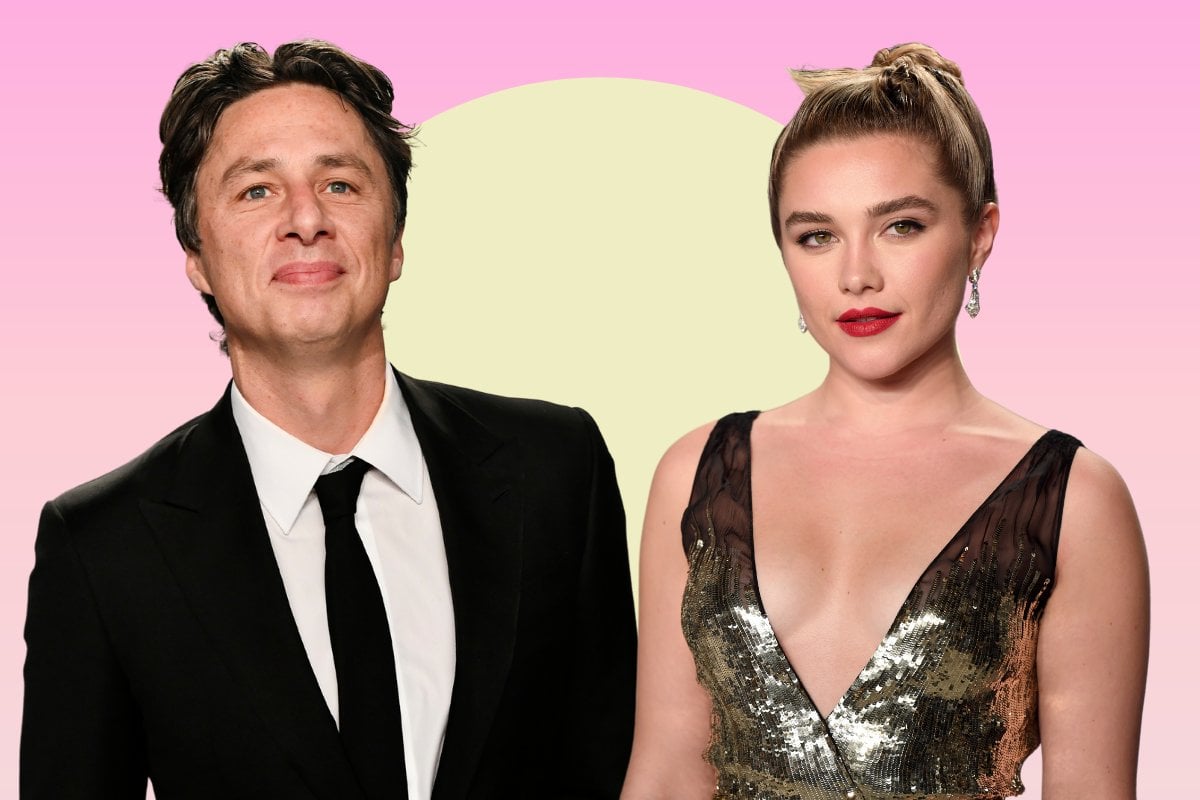 When Florence Pugh first made her relationship with Zach Braff Instagram official, the reaction was tough for her to deal with.

The 25-year-old posted to Instagram in April 2020 in honour of the Scrubs star's 45th birthday, showing him and their foster dog together.

But within minutes, she had to "turn off the comments" on the post due to the incessant "hateful comments" she received.

The celebrity couples we completely forgot about. Post continues below.

People had very strong opinions about her relationship, mostly because of the 21-year age gap between the couple.

And now, even one year on, Pugh still faces criticism about her relationship.

"I think it bugs people that it's not who they expected," she told the Sunday Times in a new interview.

"But it's my life and I'm not doing anything to please people or to make it a better headline or story. I want to also be a person!"

The Black Widow actor has since disabled comments on any photos she posts of Braff.

"It's so weird to me to go on to someone's page and sh*t on it," she told the Sunday Times.

"That's so not my nature — to go and bully for the sake of bullying. It's such an odd thing that we've become okay with in the past 10 years of social media."

Appearing on the Sue Perkins: An hour or so with... podcast last year, Pugh spoke about the initial reaction to her relationship.

"I've always found it funny, how I can be good enough for people to watch my work and support my work and pay for tickets, and I'm old enough to be an adult and pay taxes, but I'm not old enough to know who I should and should not have sex with?" Pugh told host Perkins.

"Yet again, once again, it's making a young woman feel like sh*t for no reason."

Pugh further defended her relationship in an interview with Elle UK in May 2020.

"I have the right to hang out and be with and go out with anyone I want to," she said, saying that people had no right to "educate" her on her private life.

"I know that part of being in the spotlight is that people might invade your privacy and have opinions on it, but it's bizarre that normal folk are allowed to display such hate and opinions on a part of my life that I'm not putting out there.

"It's a strange side of fame that you’re allowed to be torn apart by thousands of people even though you didn't put that piece of you out there. My point to all this is that isn't it odd that a stranger can totally tear apart someone's relationship and it's allowed?"

Sharing a video to Instagram days after going Instagram official with Braff, Pugh responded to the backlash from her followers.

"Within about eight minutes of the photo being posted [on my page], I had about 70 per cent of the comments hurling abuse and being horrid and basically bullying someone on my page," she said.

"It is the first time in my Instagram life that I have had to turn the comments off on my page," she added.

"I will not allow that behaviour on my page. I'm not about that. It makes me upset."

The Midsommar actor added that it was disappointing to see so many hurtful comments during the COVID-19 pandemic.

"I am 24 years old. I do not need you to tell me who I should or should not love. And I would never in my life tell anyone who they can or cannot love. It is not your place and really, it has nothing to do with you.

It’s believed Pugh and Braff first met while working on a short film made for Adobe Cloud, In The Time It Takes To Get There, which Braff directed.

Shortly after the film was released in April 2019, the pair were seen holding hands in New York City.

Before meeting Pugh, Braff previously dated model Taylor Bagley for five years, before the pair split in 2014. In the past, he has been linked to Mandy Moore.

From June 2019, Pugh began popping up on Braff's Instagram page, however it wasn't clear that the pair were dating.

In October that same year, Pugh appeared on Braff's page once again, when he shared a group shot caption, "People I love".

The next month, Pugh was pictured in a group shot at Disneyland alongside Braff.

In November and December 2019, they both attended the premieres of Marriage Story and Little Women, however the pair weren't photographed together.

When Braff responded to a photo of the 24-year-old with the princess emoji, a follower replied to his comment writing, "You're 44 years old." Pugh responded, "And yet he got it."

After Pugh was nominated for Best Supporting Actress at the 2020 Oscars, Braff shared a number of photos of the actress getting ready for the awards. Rather than attending the awards with him, Pugh was joined by her parents.

This article was originally published on April 10, 2020, and has been updated.

Reply
Upvote
4 upvotes
I was a big Scrubs fan. My kids have been bingeing the crap out of it for the past couple of months, so I'm re-watching bits and pieces.
When I've got a chore to do that doesn't involve much thought, I've been working my way through Fake Doctors, Real Friends, a podcast by Zack Braff and Donald Faison. It's a little project they've started during CV restrictions.
I recommend it for some good, warm & light distraction; they devote a podcast episode per show episode and invite on some of the Scrubs actors and directors.
R
random dude 2 years ago