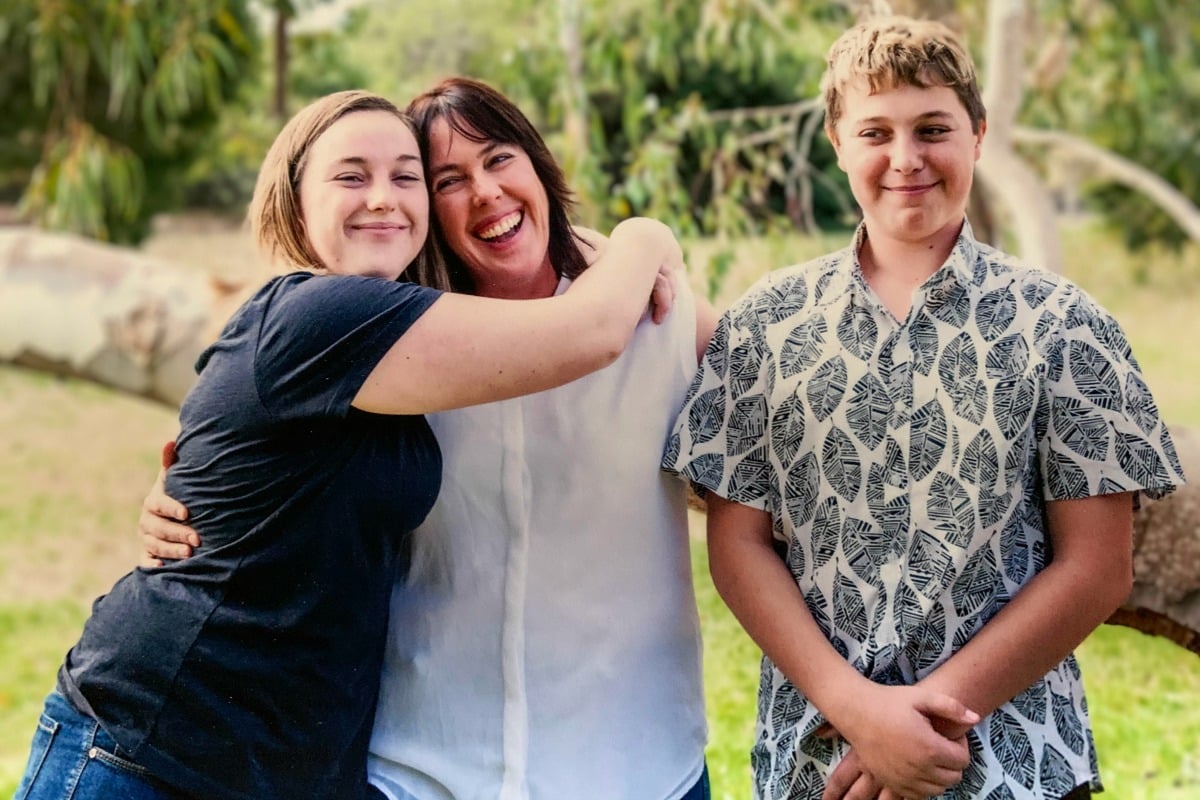 The day before her first child was born, Fleur McDonald found herself up the top of a silo, cleaning up from harvest on her remote 8000 acre WA farm.

After a traumatic 36 hour labour and forceps delivery, she brought her daughter Rochelle back to the hut she and her then husband were calling home at the time.

They were living in a 'donga', a little demountable tin structure that's usually used in mining or on construction sites as accommodation blocks.

It had four tiny rooms, was open to the elements, and had holes in the wall that Fleur had "stuffed up with steel wool so the mice couldn't get in."

With a gas stove and a gas fridge, the young couple's little petrol generator would give them about three-hour bursts to get all the essentials done.

"It was enough time to cook a loaf of bread, do the bookwork I needed to do, and do three loads of washing," Fleur told Mamamia.

With the closest town about 110km away, Fleur was about as isolated as it gets as a new mum and often found herself struggling to make ends meet. 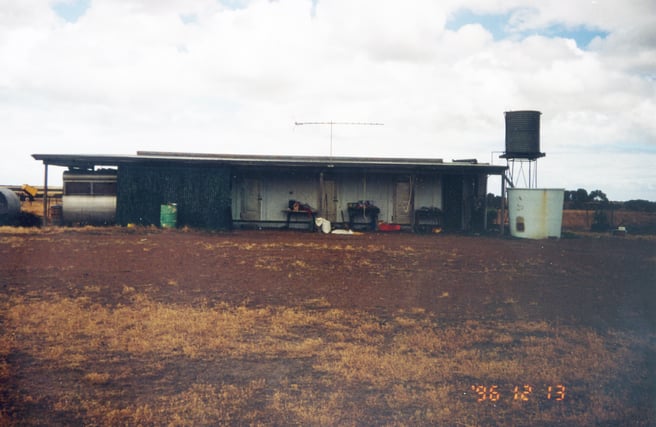 Fleur and her family lived in a donga until Rochelle was four. It was 110km away from the nearest town. Image: Supplied.

"We had an overdraft to be able to run the business, but there were times when I only had $50 a week to go and do the shopping. Farmers are notorious for having lots of assets and no cash flow," Fleur said. "Especially when you're still trying to build up your business.

"But you don't know what you haven't got," she told Mamamia.

﻿"I had everything that I needed. I had a cot, a bath that I used to place on top of the washing machine. It all worked, and it was manageable. I am sure it would have been nicer if we had a nice house, but we both had a dream of becoming farmers and we wanted to make sure we kept that dream alive."

"I had had no intention of getting pregnant again so quickly because I had a very traumatic birth the first time. ﻿I certainly wasn't wanting to go again so quickly. So when I found out I was pregnant with Hayden I was really quite devastated. After he was born, I got postnatal depression, which I got treatment for for the next four years," Fleur told Mamamia.

But raising two young kids in a remote donga, while working long, tiring days on the farm as one of the first and only jillaroos in the area, was only the start.

Pretty soon it became evident that both kids were going to have very different and complex needs. Both Rochelle's dyspraxia – which is a breakdown in speech and gross motor skills - and Hayden's autism, were diagnosed at the 18-month stage. 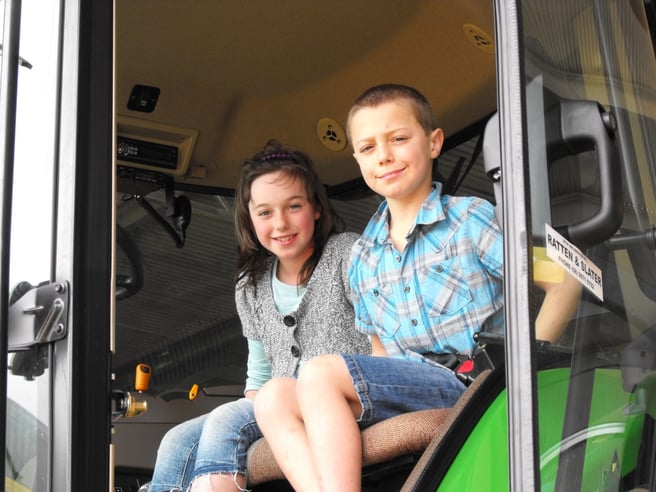 Fleur taught both Rochelle and Hayden sign language to help them communicate as kids, all while running the farm. Image: Supplied.

Fleur had originally jibed, "lightning doesn't strike twice," after their daughter's diagnosis. But sure enough, some twelve months later they were informed about Hayden's likely diagnosis, which wasn't officially confirmed for another six years or so.

Both kids didn't sleep through the night until kindergarten, and neither could talk - for very different reasons - so Fleur taught them sign language.

"I didn’t have any family in the area and was exhausted and beside myself. Yet, I had to keep going because there was no other option," she said.

Both kids had to be driven for hours to nearby cities and towns for speech therapy and specialist appointments throughout their entire childhood. So Fleur used to throw tightly wrapped presents into the back seat to keep the kids occupied while she tried to navigate the city roads.

There would be nights Fleur was up eight or nine times tending to the kids, with Hayden, who has a global delay, still in nappies when he started school. Add to that having limited power and a home that wasn't weatherproof (hello, frogs and snakes), while managing a sheep and cattle farm.

It was a lot. But as Fleur will tell you, "she wouldn't change a thing." 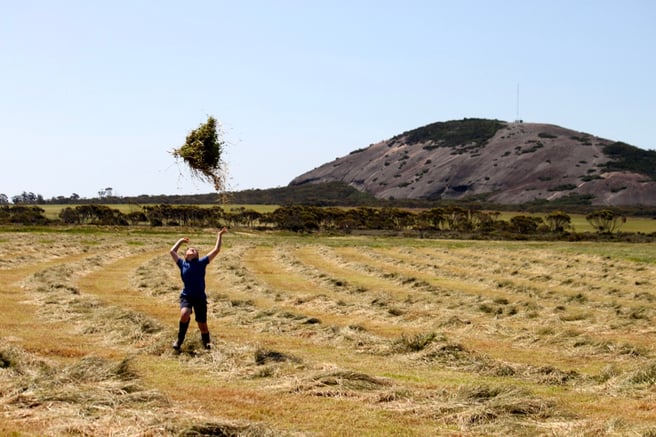 The family farm was 8000 acres and was nearly crippled by the 2008 drought. Image: Supplied.

Rochelle, now 20, has just got back from a year in England - her disability only really noticeable if she's particularly tired, thanks to all the time Fleur spent with her in therapy when she was younger.

Hayden, 19, is studying to be a pilot while working full time detailing tractors. He has a goal to move out of home when he's 21.

"It certainly was a difficult time, but it built resilience. It made me who I am today," said Fleur. "And I am really proud of them both. They've had their challenges and they've certainly stood up and faced them."

It was during those horror years, that Fleur also started on her journey to becoming an award-winning author.

By the time her daughter was nine, she was the highest selling debut author of 2009 with her novel Red Dust.

She'd written over the years on snippets of paper in between night feeds, and while shifting sheep in the ute, or during rare moments of peace under a tree in a paddock. 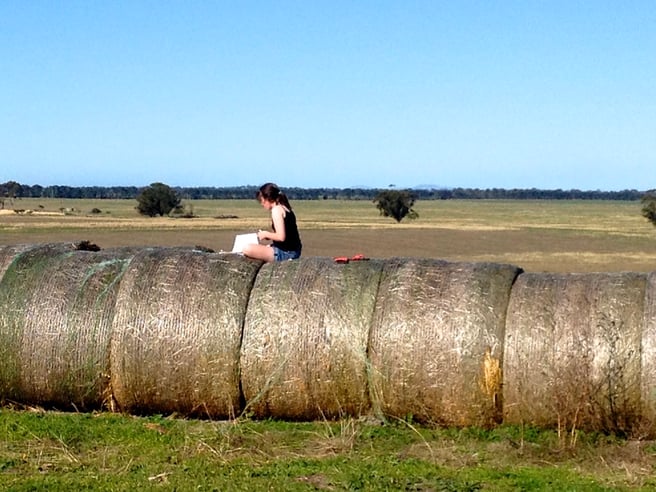 Somewhere, amongst parenting and farming, Fleur found the time to write an award-winning first novel. Her daughter Rochelle, pictured above, on the family farm. Image: Supplied.

It was fiction, but her protagonist was a woman working on a farm like her. Writing proved to be a much-needed escape from a hectic life.

She still remembers the phone call from a number she didn't know, offering to buy that first book.

"My heart came through my chest, but I didn't want to show her that. So I just tried to be really professional and calm. She emailed me afterwards and said 'you're the most unexcited author I have ever made an offer too'. She didn't know that after hanging up the phone I squealed out loud and jumped on the bed," said Fleur.

That book marked the start of a new chapter for Fleur, one where she would call herself 'author' as well as 'farmer'.

Since then, she’s gone on to write 15 novels and two children’s books, and is about to release another. She's also set up a not-for-profit online called Breaking the Silence, after some experiences of her own, which aims to help victims of domestic violence. They're about to launch an online and phone counselling service for regional areas of WA.

Rewind 20 years to the early 2000s, where a 20-something Fleur was raising two small kids with a disability in a remote WA donga, and that woman could never have imagined her life would end up the way it has.

"But you can never know what life is going to throw at you. You just have to give it a crack when it turns up," said Fleur. 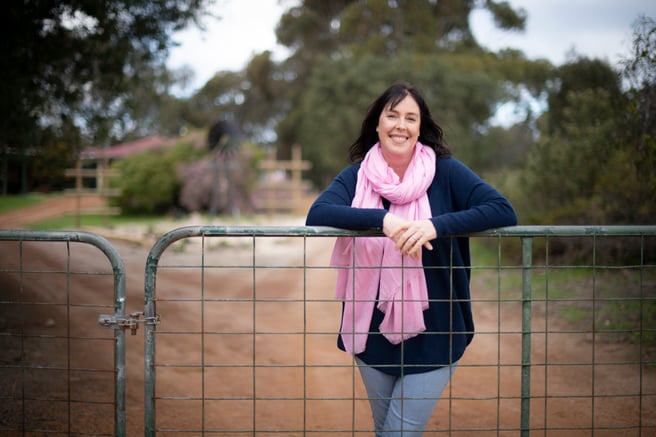 Fleur McDonald is about to release her new book, The Shearer's Wife. Image: Dan Paris.

At the time, it felt like the pain and fog would never lift. But with hindsight, Fleur says it does more than lift - it disappears.

"At the time I thought I would never forget anything that happened back then. But now I couldn't tell you about my children's delays as we realised them, or the failed toilet training, or the non-stop screaming (from Hayden), or any of that kind of thing. I recently had to go back and re-read some old diaries and medical reports to remember it all."

The exhaustion of those tough toddler years has been well and truly replaced with the adventures and triumphs of having two well adjusted and ambitious teenagers, as well as becoming a successful author.

"I was once told writing was something you do on a Sunday as a hobby, it's not something that's going to make you enough money to live on. I beg to differ," Fleur told Mamamia.

You can pre-order Fleur's latest book The Shearer's Wife here.

Reply
Upvote
This is exactly what I needed to read today.  Mad respect to this lady.
M
mamamia-user-391653937 2 years ago