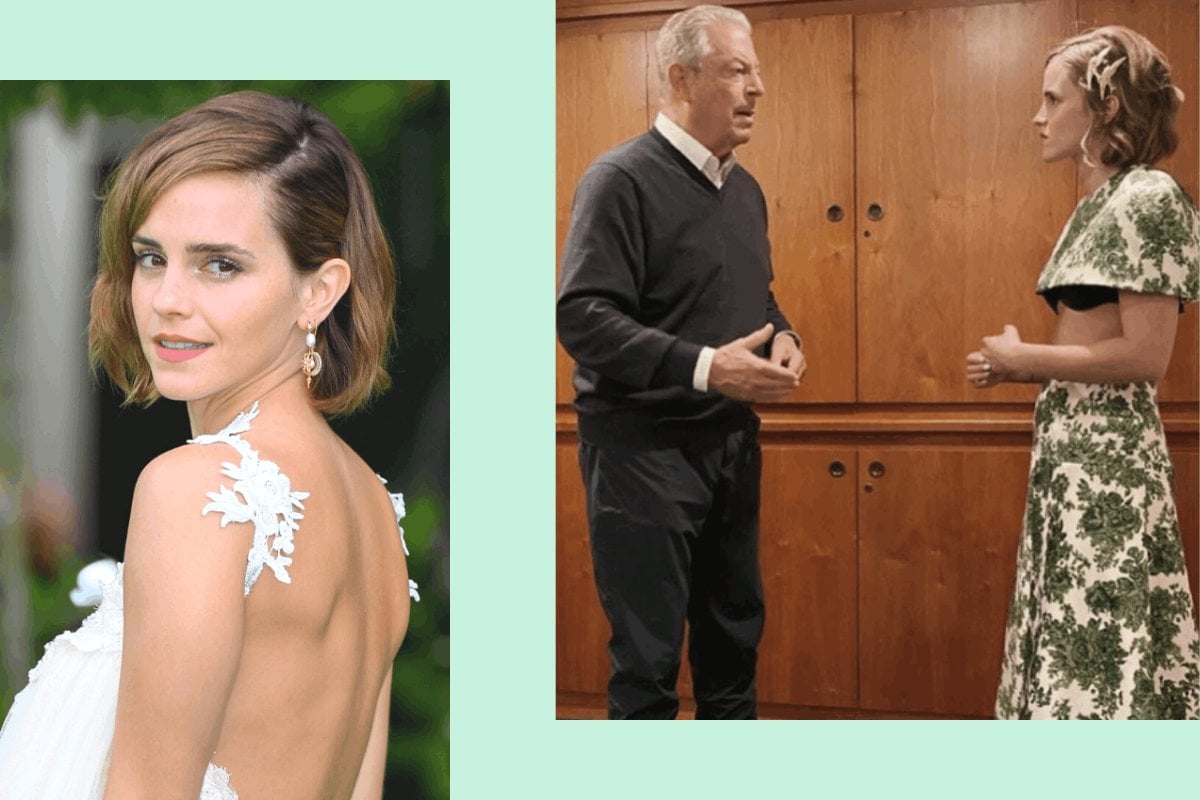 Emma Watson has been dormant on her socials for quite some time now. It’s also been over two years since Emma was seen at a red carpet event. But goodness, she has been busy.

In a string of Instagram posts, the Harry Potter and Little Women actress has been documenting her environmentalism work in the lead up to the Cop26 UN Climate Change Conference from late October to mid-November. It is the same Glasgow Summit that Australian Prime Minister Scott Morrison is set to attend.

But all is not what it seems.

Emma’s Instagram page, with over 60 million followers, has been taken over by an anonymous Feminist Collective for Cop26.

With a passion for activism and telling important stories, here is exactly what Emma Watson has been doing recently.

Australia's war on waste is beginning. How much do we waste in Australia? Post continues below.

From her socials, it’s clear that advocating for climate change has been a massive part of Emma’s life for the past few years.

Just this week she met one of her idols: Al Gore, who is the Former Vice President of the United States, a Nobel Prize Laureate, author and founder of not-for-profit Climate Reality.

“It was really surreal to meet and interview one of my idols. I think one of the many reasons I find Al Gore so compelling is that even though he lost one of the biggest fights of his life to become president in 2000 he has continued to do the work he set out to do despite humiliation, loss and defeat... the tides have been against him for years and he’s kept swimming. That to me is a hero.”

“Thankfully climate change action is becoming mainstream and the tides have turned in his direction and now we are all swimming with him.”

The actress was also in attendance at the highly publicised Earthshot Prize red carpet this week.

The inaugural ceremony, presented by the Duke and Duchess of Cambridge in London, is an ambitious environmental program aiming to find new ideas and technologies globally in a bid to tackle climate change.

Earthshot also put their money where their mouth is, ensuring a carbon-neutral production and broadcast with a zero-waste approach regarding the set design and staging.

“Thank you to ALL the innovators, activists, academics, and advocates for educating us. Whether that be through resisting corporate greenwashing and land grabbing, or inventing technologies to safeguard the survival of species across the world, your work is unbelievably important,” Emma wrote on her Instagram.

On the same red carpet, Emma celebrated eco-conscious fashion at its finest, dressed in an upcycled wedding dress.

The garment is from the FOUND collection created in partnership with Oxfam Great Britain and was designed by avant-garde and gender-fluid designer Harris Reed.

Emma is also a self-confessed thrifty queen. “I love buying vintage as it’s such a sustainable way to shop,” Emma recently wrote on her Instagram.

In the wake of George Floyd’s death in May 2020, there was a resounding push for retailers across the world to start supporting brands and stock founded or led by black and First Nations people.

Not-for-profit organisation 15 Percent Pledge has also called for retail giants to pledge 15 per cent of their shelf space to black-owned businesses: something that Emma herself has got behind.

“I’d love to work with my partners to ensure a greater percentage of the sustainable brands they feature are founded or led by black people.” Emma also called for black-helmed brands to reach out to her so she and her followers could collectively support them.

When it comes to researching sustainable fashion options, it can be pretty overwhelming. Fairtrade, organic, sustainable, ethical, vegan, carbon-neutral, artisanal, fast fashion, slow fashion: the jargon is endless and ever-changing.

As Emma has said herself: “It’s a minefield out there in the fashion world! What does it all mean? Does it matter? What matters most? How do I choose? What is greenwashing? Which information or recommendations do I trust?”

Using fashion as a storytelling tool for action on environmentalism, in 2018 Emma guest-edited Vogue Australia’s March Issue, which was "dedicated to conversations about sustainability and ‘Designing the Future'."

I helped guest edit @vogueaustralia’s March issue dedicated to conversations about sustainability and “Designing the Future”.

I am so proud of this! @Edwinamccann thank you for making my editing dreams come true. Link in my bio to read my guest editor letter. pic.twitter.com/p3vRQ1AEoh

“After a year dominated by an alarming newsfeed, it seems we have hit a turning point. Silenced voices are becoming amplified and media outlets are shining a spotlight on the people and groups challenging for change,” she wrote in her Editor piece.

“I would like to challenge you, after reading this issue, to make a one-degree shift, because a small change can make a huge difference.”

Listen to this episode of You Beauty, about the best eco-friendly beauty buys. Post continues after audio.

Emma Watson on being "self-partnered".

Like many who are on the cusp of their 30th birthday, existential questions about your relationship future tend to run rife.

In a 2019 interview with British Vogue, Watson admitted that when she was about to turn 30, she too felt quite panicked about not being in a relationship.

“I was like ‘why does everyone make such a big fuss about turning 30? This is not a big deal…’ Cut to 29, and I feel so stressed and anxious. And I realise it’s because there is suddenly this bloody influx of subliminal messaging around.”

“It took me a long time, but I’m very happy [being single]. I call it being self-partnered.”

Since that interview, Emma has reportedly found love with Californian businessman Leo Robinton, although there are reports that the couple recently split.

Given the resounding interest in her private life, it’s no wonder Emma has said she prefers to keep her relationships out of the spotlight. And she just may continue to.