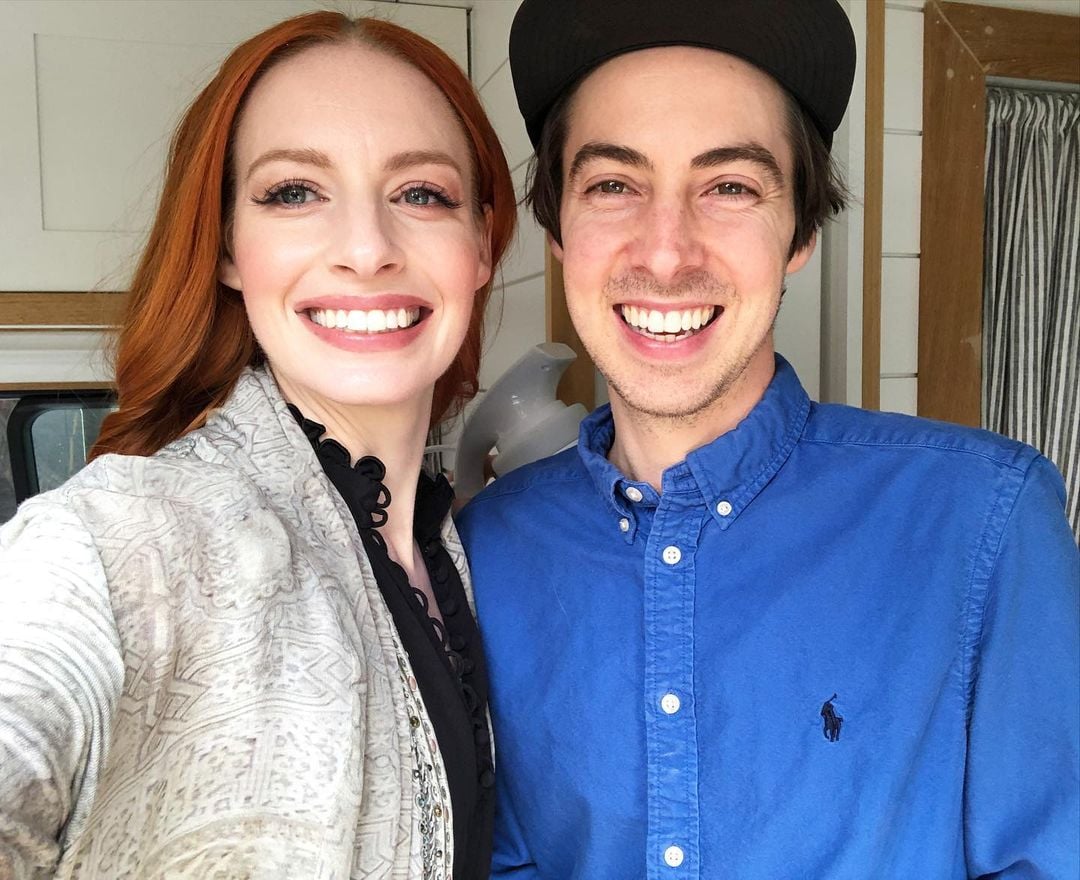 Emma Watkins was the first ever female Wiggle, and one of the most recognisable children's entertainers in Australia.

Two years ago, Watkins announced her new partner Oliver Brian to the world, and over the weekend, she tied the knot with him.

The pair met while working alongside each other on The Wiggles set, and were friends for four years before they started dating in 2018.

"He’s a very calm and thoughtful person and I’ve always been interested in his mind and his take on life, and his morals," Watkins told Stellar Magazine in 2019.

The pair became engaged in April 2021, with Oliver popping the question near Warrnambool in Victoria.

"Olly drove me around to see his childhood home in Woodford and we walked around to an old bridge at the back of his primary school," Emma explained. "Olly got on one knee, he was so nervous about falling off the bridge. It was such a surprise! I said, 'yes, and is this actually happening?' I couldn’t believe it and then we both cried."

Funnily enough, the pair would wed a little over a year later not too far from where Oliver popped the question.

Being so close to Oliver's hometown, among friends and family, was a highlight for Emma who described her wedding day as "emotional".

"Olly was just so struck, it felt very significant," she told Vogue of their big day.

"Everyone was so connected, but they didn’t know each other. It felt emotional, even seeing family - Olly’s grandfather, Frank, was the honourable guest," she recalled.

The wedding reflected a Pride and Prejudice theme, with Emma saying it was an "overture" in her mum's mind.

And it is certainly true, from the venue right down the wedding shoes.

Wearing a Paolo Sebastian dress, Emma opted for a soft tulle fabric with a champagne-coloured tinge - a colour the bride admits isn't something she would normally go for.

"The dress is so much more simple than I thought I was going to choose. I’m quite eclectic and eccentric – I like colour. I was looking for something fun. When I saw the dress I thought, that is very me," she told Vogue.

As most wedding dresses do, every part held significance to Emma who adored the collar, ballerina skirt and the subtle sparkle of the Paolo Sebastian gown. She had been a ballet dancer all her life until an injury meant that a professional career as a ballerina was off the cards.

"I would never have imagined it and that’s why I like it so much. It fit perfectly –  I went 'I am not trying anything else on'. That’s very me. I am very like, I see one thing and am like, 'it’s definitely that,'" she shared.

"I love everything about the soft tulle that they use in a way that has a ballerina-esque background to it," Emma continued. "I’d been looking for something that wasn’t too fluffy, that had a bit of ballet in it. I always wear button-up collared shirts and when I saw his dress I thought, 'oh, it has a collar!'"

Even the shoes –  a pair of buckled, plum velvet Roger Vivier flats – paid homage to her former dancing days. Emma chose her wedding shoes with a country venue in mind.

"They’re a velvet ballerina flat with a buckle, and the buckle is made of diamanté crystals," she said. "We told guests not to wear heels if you can avoid it, it was outside in the country and we didn’t want them to get stuck in the grass. In my head, I was like, 'I am definitely going to wear flats!'"

For final touches, Emma and Oliver reflected their love through heirlooms from the bride's family. Emma wore a yellow gold wedding band once belonged to her great-grandmother, while Oliver had a reshaped white gold band from Emma's "nanna".

The moment before they exchanged vows and Emma walked down the aisle, Oliver admitted he was "basically a mess".

"I was in shock when Emma got out of the car. I was fixated on you the whole way down [the aisle] - when your dad handed you over, it was a very beautiful moment. I was definitely overwhelmed and there were tears," he told Vogue.

For Emma, she said it was a moment she will never quite forget.

"I was feeling very emotional  - I held Olly’s hands, and I was kind of dancing, swaying a bit - that’s probably very me... Olly was just so struck, it felt very significant."

Being a performer and dancer, Emma explained it only made sense she do her own makeup and hair styling herself.

"In my profession, you don’t have a choice but to do it yourself... I think being here and being so remote, I wanted to be on my own and to have that time by myself to get ready. It felt more casual for it to be just me," she recalled.

Listen to Emma Watkins' chat with Mia Freedman on No Filter. Post continues after podcast.

Even her headpiece - made with silk flowers - was handmade by her just moments before she would walk down the aisle.

"I was cutting them and putting them into my hair, and pinning them. I wanted it to be that I’d made it, especially for the day," she said. "I really wanted to do as much for my outfit myself and to have it as if I was getting ready for a show. It was very me. I was putting them in at the last minute."

Her own bridesmaids wore pink Viktoria Novak headbands and teamed it with Aje dresses and R.M William boots.

All wedding images in this article are courtesy of Liz Sunshine and Vogue magazine.

Reply
Upvote
1 upvotes
I love that dress. She looks fantastic.