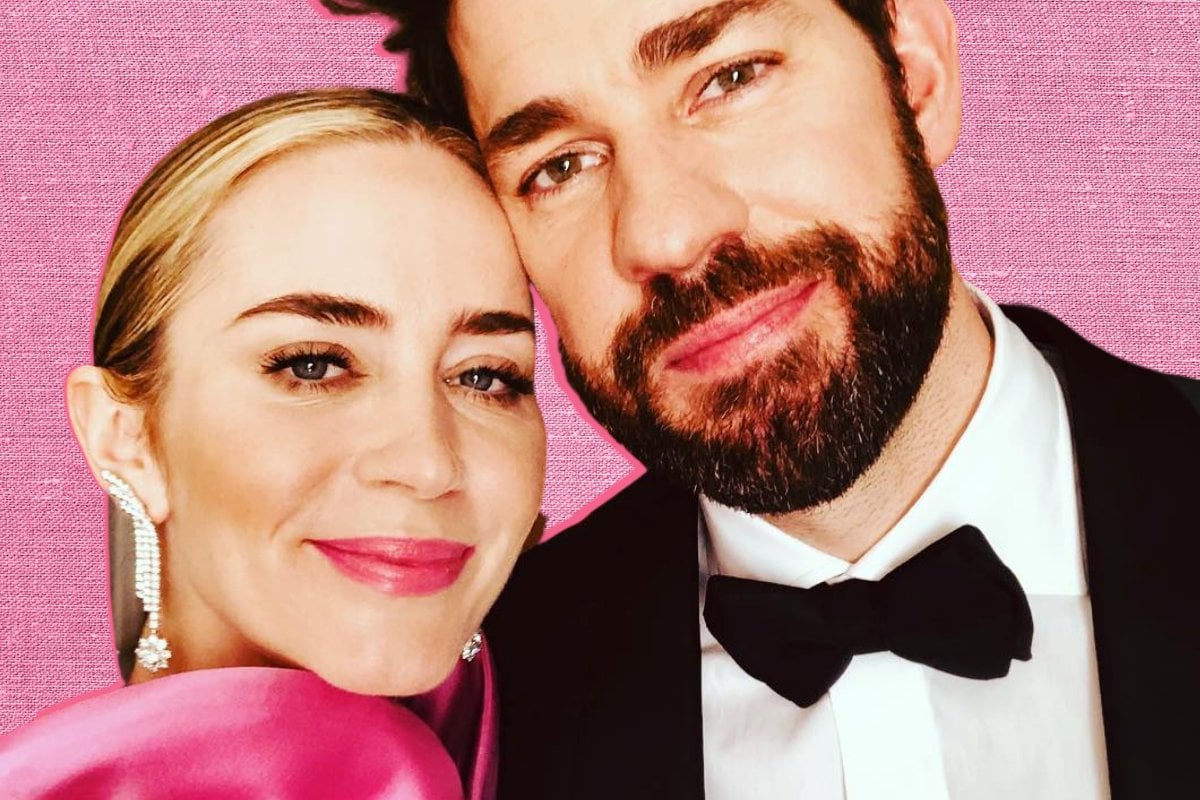 Out of all the A-list celebrity couples, Emily Blunt and John Krasinski seem like some of the happiest.

The actors - who have been married for 10 years and share two daughters - constantly seem delighted to be together, all while balancing their highly successful careers and family life.

Watch the trailer for their film A Quiet Place starring Emily Blunt and directed by John Krasinski. Post continues below.

But while filming their second movie together, A Quiet Place II, Krasinski put their marriage "on the line".

During the first sequence of the film (which is in the trailer), there is a stunt where Emily Blunt is behind the wheel of a car that comes up against several obstacles. The stunt took six weeks to rehearse and was all real.

To make it appear as authentic as possible, Blunt wasn't told about the sequence until the day of shooting.

"I realised as I was explaining to her all the things that are going to happen, like 'You’re going to hit this pedestrian and then these cars are going to cut you off, and then a bus is going to come at you at 40 miles per hour'," Krasinski told Live with Kelly and Ryan.

"That’s all happening to her. And I realised, 'Oh my god, I just put my marriage on the line, I might end my marriage in this shot'." 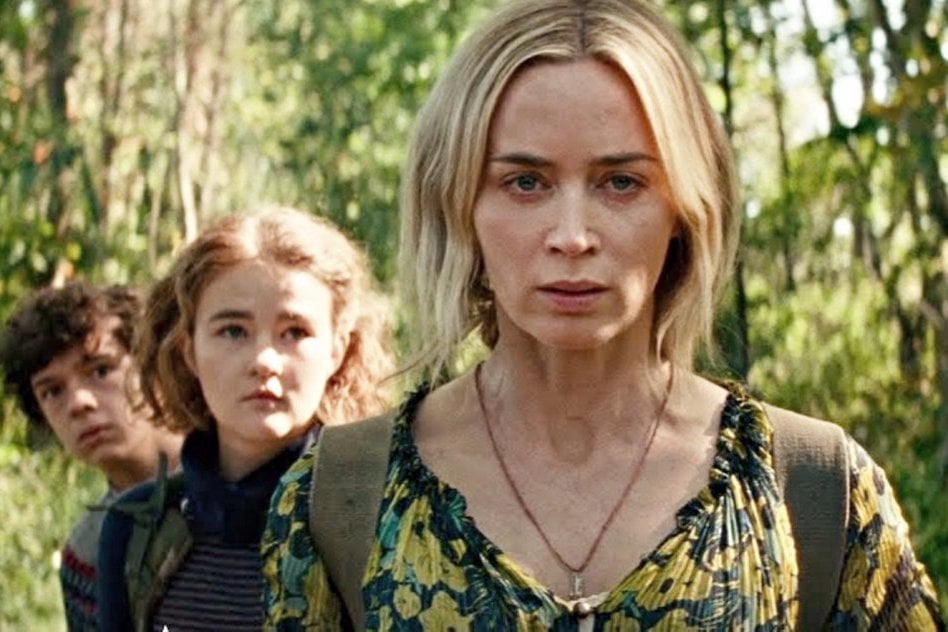 Thankfully, the couple adore working together so it worked out fine.

"Everybody was wondering how it would go working with your spouse and so were we, we were very excited to see how that would go and by excited, I mean terrified," Krasinski said during a virtual live Q&A session after the Australian preview screenings of the film.

"On the first movie, I found the best collaborator of my entire life. She’s not only the best actress but she’s someone who puts everyone at ease because she’s so unbelievably prepared, unbelievably professional and cares so deeply about the entire process."

The couple first met through a mutual friend at a restaurant in Los Angeles. Both Krasinski and Blunt insist that they weren't looking for a relationship at the time. However, Krasinski immediately knew she was the one.

"It was one of those things where I wasn't really looking for a relationship and I was thinking I'm going to take my time in LA," Krasinski told Ellen DeGeneres in 2011.

"We were discussing how much I was enjoying being single. And then [my friend] goes, 'Oh, my God, there's my friend John.' And that was it. He was sitting with our friend Justin Theroux, and he abandoned Justin and came over to us. He just stood there and made me laugh. I kind of knew right away," she said when appearing on Late Night with Seth Meyers.

A few weeks later, the couple went on their first date. 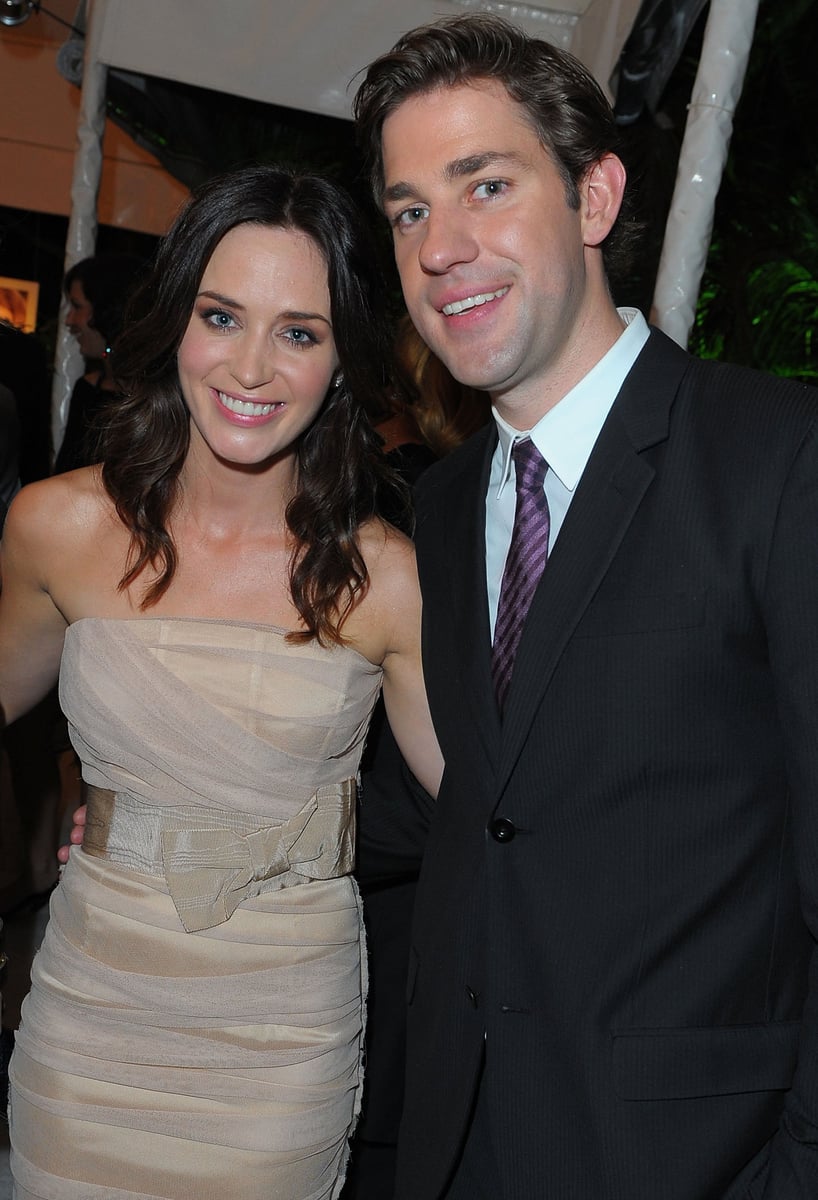 Krasinski was so adamant that there wouldn't be a second date that he took Blunt to a gun range.

"I think that I was so sure that I would never end up with her... that I was like, 'You know what, I'm gonna blow it right away and then that way you don't feel bad,'" he added.

In an interview with Glamour in 2016, Krasinski shared just how much he liked Blunt.

When asked how many times he'd seen The Devil Wears Prada he responded, "Like 75! It’s bizarre".

"Before I met Emily, I had seen that movie — because it’s on TV all the time — so it’s one of the only movies that if you’re channel surfing and you land on that, you have to watch the rest of it. Embarrassingly, I think we had only been dating a couple weeks, and she stopped by... and I didn’t know she was stopping by, so when she opened [the door and came in], I quickly flipped the channel.

"I’m sure she thought I was watching something completely inappropriate, and I actually chose to let her believe that than know that I had been watching The Devil Wears Prada," he continued. 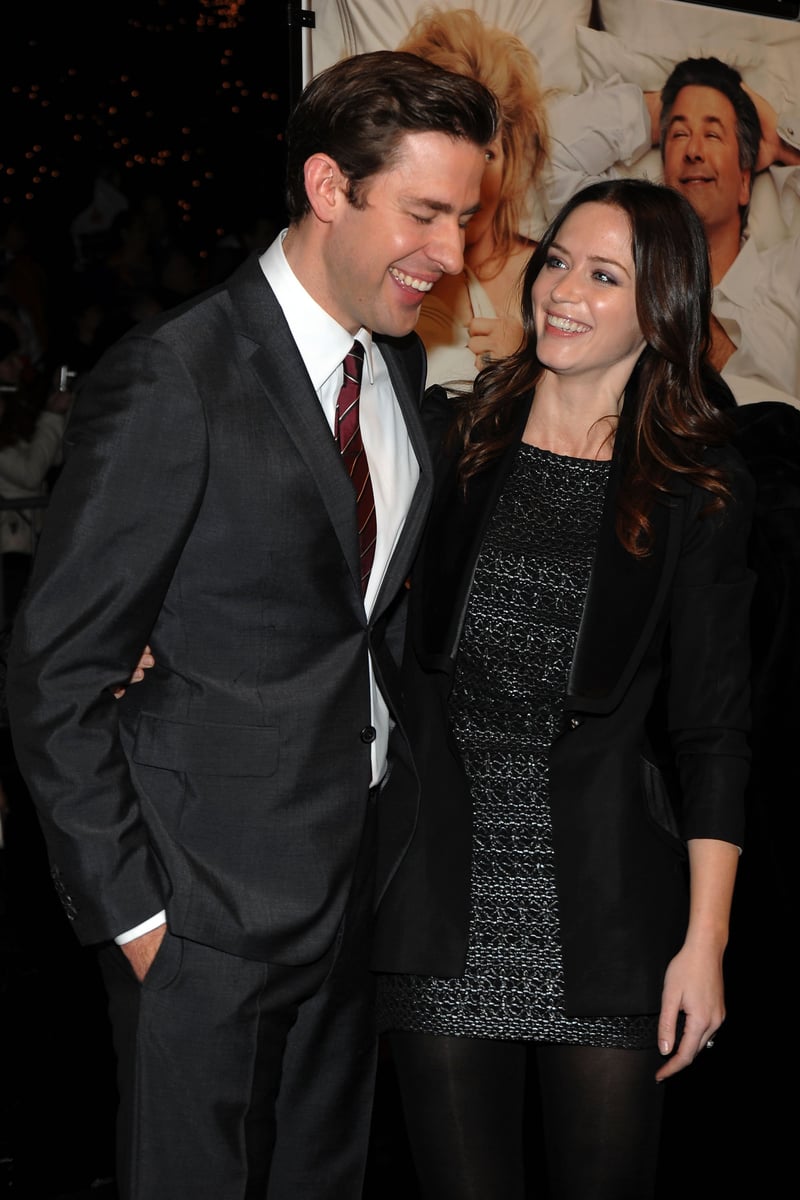 In August 2009, the couple became engaged. Both Krasinski and Blunt cried.

"She did cry after I cried and we cried and then everyone around us was crying," he told Access Online.

"Then, I think people weren't really sure what was going on, but they were crying because we were crying. But it was great. At the end of the day she said yes which is great. It's a big part of this whole thing." 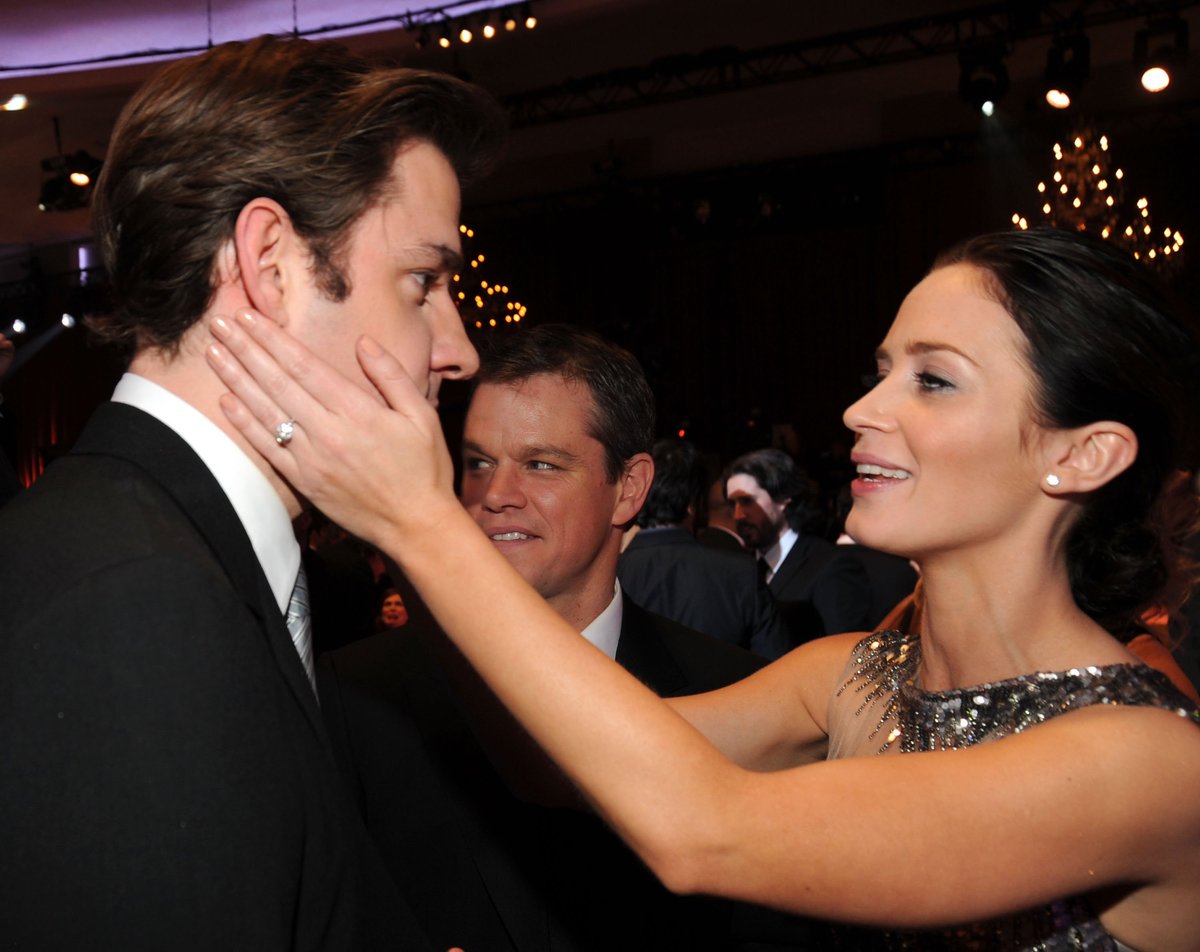 On July 10, 2010, the couple got married at George Clooney's Lake Como estate. But it wasn't until Clooney asked Krasinski three times if he'd like to use it, that he said yes.

"George said, 'I have this place and you should feel free to use it.' Only on the fourth ask did I say yes. Because the first three times I thought, There's no way he is serious. But I started to see his feelings get hurt. I actually hurt George Clooney's feelings," Krasinski told Elle.

On February 16, 2014, the couple welcomed their first child, Hazel.

Wanted to let the news out directly. Emily and I are so incredibly happy to welcome our daughter Hazel into the world today! Happy bday!

Three months later, Krasinski shared his first and only photo of her.

Pics of kids should only come direct from parents. So I'm thrilled to introduce you guys to Hazel!!! #NoKidsPolicy pic.twitter.com/qVvUTRdllP

What better way to celebrate the 4th... than to announce our 4th family member!!! 2 weeks ago we met our beautiful daughter Violet #Happy4th

Although both Krasinski and Blunt are successful actors in their own right, they had never worked together. That was until 2018 when Krasinski directed and the couple both starred in the horror film, A Quiet Place.

Krasinski was in awe of his wife's performance.

"I've always been the biggest fan of her, but not until you're in the room when she does what she does do you know why she's so phenomenal," Krasinski said on The Tonight Show. "She's unbelievable. The most talented, powerful… kindest person. She makes everyone around her better. So honestly, that was my experience."

In January 2019, Blunt won a SAG Award for her performance in the film. In her speech, she thanked her husband.

"I am going to share this completely with my husband, John Krasinski, because the entire experience of doing this with you has completely pierced my heart directly. You are a stunning filmmaker. I am so lucky to be with you and to have done this film with you," she said.

"Thank you for giving me the part. You would've been in major trouble if you hadn't, so you didn't really have an option," she added.

In July 2020, Krasinski and Blunt celebrated their 10-year wedding anniversary.

"Having John's support is everything because we are each other's confidant," Blunt told People this week. "That shared understanding has really been a very vital anchor for me."

Now, after both filming and the release date of A Quiet Place II was pushed back due to COVID-19, the film is set to hit cinemas in May.