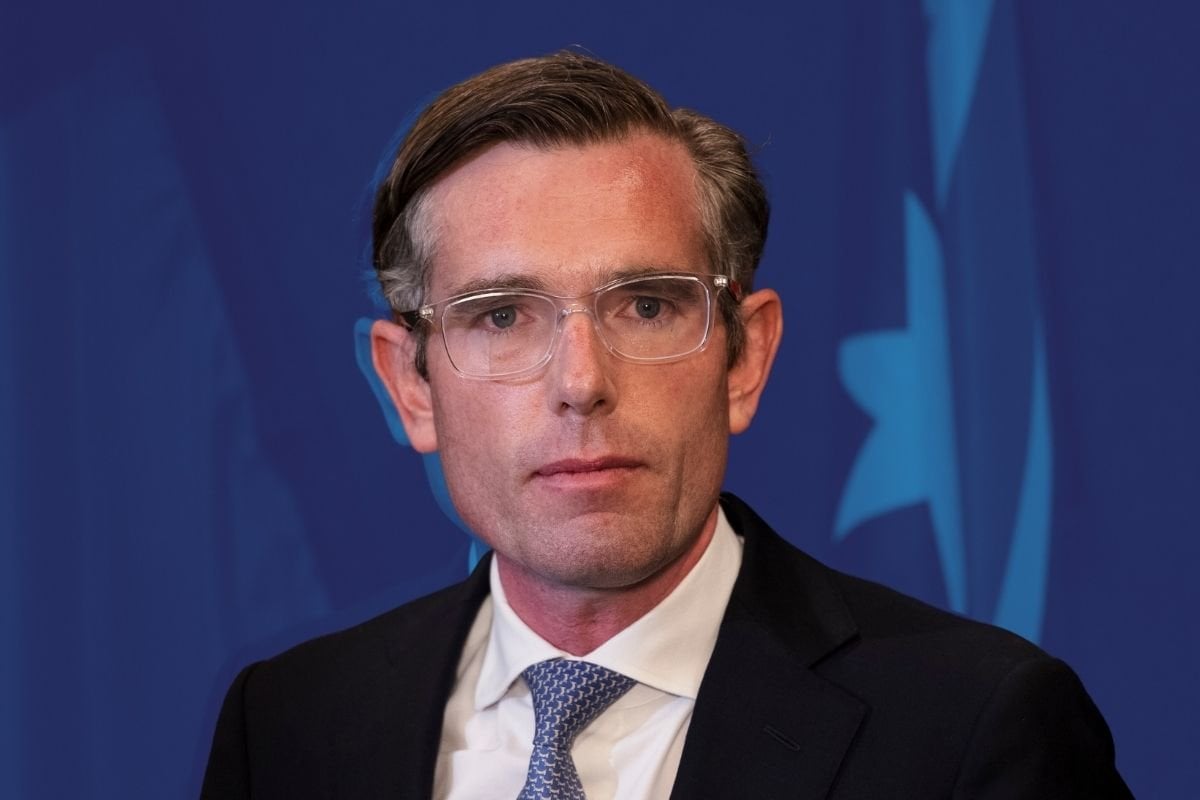 As a constituent of New South Wales, I am nervous.

As a woman, and a supporter of LGBTIQA+ communities, I am particularly nervous.

This week we got a new premier, our youngest ever, in Dominic Perrottet.

He's been a part of the NSW Liberal party and their decision-making for a while, as treasurer and deputy leader since 2017.

Watch: The new NSW Premier is asked about his family. Post continues after video.

But the 39-year-old's elevation to the top job makes me nervous because of what he stands for.

He's part of what's called the "conservative right faction" of the party, and was once described by former Prime Minister John Howard as the "great hope in Australia for political conservatives."

He's also been labelled NSW's most conservative premier since WWII.

Big day today and a big job ahead, but we're getting straight back to work for NSW. pic.twitter.com/OvBNyliK53

Let's be clear; you can be religious and work in politics and those two things can co-exist. Freedom of thought and belief are core Australian values.

But Perrottet has already admitted that his devout Catholic faith has a fundamental influence on his work in politics.

“I think having a Christian faith is part of who I am and inspires me to make a difference wherever I go,” he said in 2020.

He addressed the comments about his faith on accepting the role as premier remarking, "I am very proud of the fact that I have a strong Christian faith. Does that in any way take away my capacity to serve as premier? Well, I do not think so, and I think it is a sad thing that some people do."

It doesn't take away from his capacity.

But this is a man who thinks abortion should still be a crime, and told parliament that supporters of abortion decriminalization were "on the wrong side of history."

This is a man who voted against same-sex marriage.

This is a leader who questions climate change, and who in 2015 described monetary measures to abate it as a “gratuitous waste."

This is a man who celebrated Donald Trump's win as a victory for the "silent majority" and "forgotten people,"  even after we knew about the 'grab em by the pussy' comments, the campaign in which he labelled Mexican immigrants "rapists" and supported a ban on Muslim immigration.

Troublingly, he vocally opposed a bill that would require priests to disclose child sexual abuse because, "the confessional seal is sacrosanct no matter what sins are confessed."

He thinks we should stop “throwing money” in the form of welfare payments at Australia’s most vulnerable people. He says it contributes to rising divorce rates and single-parent families.

Most of Perrottet's political views are informed by his religious ones and now that he's in charge, what message does that send to same-sex couple families?

To women fleeing domestic violence who needed to lean on welfare and become single-parents to escape?

NSW Premier Dominic Perrottet is open to hold his own views on family and faith. However, his views will negatively impact the lives and livelihoods of others, including young women, which is a problem. Further, his views on climate change, racism and other issues is troubling.

To families that rely on welfare, to survive?

To non-binary Australians who prefer to use they/them pronouns?

To women who want or need an abortion?

To young girls and boys who want to explore their sexuality and sex but have been inadvertently told by their new leader that they shouldn't?

As social activist Stephanie Dowrick wrote for The Sydney Morning Herald having such conservative Christian views while serving in public life "drives attitudes and often policies that may be severely at odds with the central demands of democracy."

"If religious beliefs are held privately, then individuals are entitled to their views. Yet at the more fundamental end of all religions, including Christianity, a dogmatism takes hold that blurs those vital margins between private and public. And that will always be significant when those individuals have the power to exercise choices that directly affect our collective wellbeing," she added.

As NSW MP Jenny Leong reiterated, "people have the right to religious belief and should not be targeted for it, BUT if that religious belief determines their political decisions, which in turn undermines our right to choose and entrenches discrimination in our laws then it’s fair game to criticise it."

Let’s be clear, people have the right to religious belief and should not be targeted for it, BUT if that religious belief determines their political decisions, which in turn undermines our right to choose & entrenches discrimination in our laws then it’s fair game to criticise it

Even as premier of NSW Perrottet can't get legislation through without the support of his party, many of whom are moderates and don't hold as conservative views as he does.

He has promised his party's MPs will be allowed a conscience vote on an issue he strongly opposes himself, voluntary assisted dying legislation, which is set to come before the parliament in the coming months.

He also assured the state in an interview with 2GB on his first day in the job that the abortion laws were safe.

"I have no intention of changing the laws in that space, one of my top values is freedoms," he said.

Thankfully, Perrottet has shown a commitment to listen to a wide range of views that differ from his own.

But I am still nervous.

Because as NSW Premier he is in a position of power where other people who hold the same views feel vindicated and seen in their hard-right mentality. Unlike him, they might not be as willing to listen to the wants and needs of others who live lives they don't agree with.

I am nervous because of the optics of that; because of what it means for our plight for equality, acceptance and social change.

In 2016, while celebrating Trump's win Perrottet remarked, "it's time for a conservative spring."

Now that spring has sprung in New South Wales.

I just hope it doesn't undo all of our progress towards a more accepting, equal democracy.

Reply
Upvote
Very well said Gemma. It does feel like many progressive steps could be removed just that little bit more easily now. America, Poland and other conservative countries are all seeing precious won rights reversed and I fear without a loud left or middle moderates that we could slip the same way.
M
mamamia-user-680043716 9 months ago

Reply
Upvote
1 upvotes
I hear you Gemma, and whilst I do not live in NSW nor am I in some of the minority groups this man hates, I am also nervous, concerned and upset for our world where those that hate are elected to rule on our behalf (but history shows, not to represent us unfortunately). Good luck NSW 😞
S
suz 9 months ago