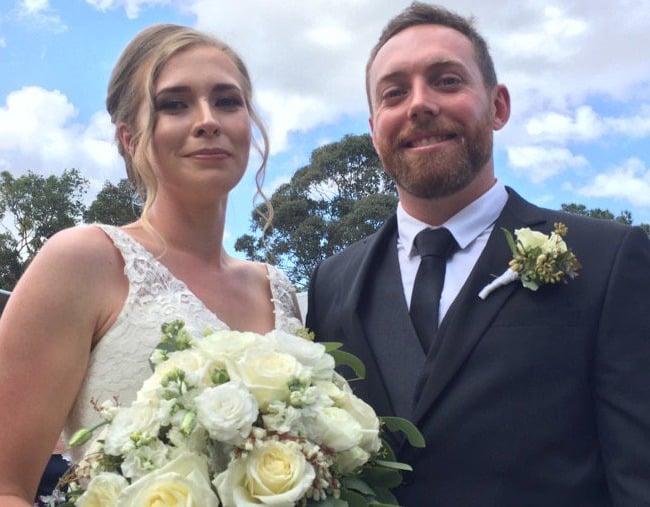 It’s supposed to be the happiest day of a young man’s life, but for Dean Morcombe, his wedding day held a tinge of sadness as one face remained absent from the sea of smiles.

On Saturday, 15 years on from the abduction of his brother from a Sunshine Coast bus stop – the biggest murder investigation in Queensland’s history – Dean Morcombe married his partner Alice ahead of close family and friends.

His mother Denise, glowing with pride, shared a number of photos from the wedding day – the couple cutting their wedding cake, family and friends, her with her equally-proud husband Bruce.

My boy and his wife cutting cake x pic.twitter.com/OMyfQeWX1U

But one heartbreaking image within the collection stood out – an old photograph of her three sons, not more than three years old, playing together in the snow. The caption a bittersweet message of tribute to her slain son Daniel, who disappeared from their lives one afternoon 15 years ago.

“My boys are now grown up or gone enjoy time with them.”

My boys are now grown up or gone enjoy time with them pic.twitter.com/ZWX3A5X6Em

Denise and Bruce, along with their sons Dean and Bradley, Daniel’s twin brother, established The Daniel Morcombe Foundation in an effort to educate children about their personal safety, with the goal of preventing another family ever having to endure what they have.

On December 7, 2003, 13-year-old Daniel was ripped from his family by Brett Peter Cowan while waiting at an unofficial bus stop.

Daniel's disappearance became the most well-known child abduction case in Australia. Despite going missing in 2003, Daniel's body was not found until August 2011 - torturing his parents and brothers for eight, long years.

On August 13, 2011, the family finally had answers; Cowan was taken into custody and charged with Daniel's murder. He was sentenced to life in prison with the possibility of parole after 20 years.

One year on, 2000 people attended Daniel's funeral at Siena Catholic College on December 7, 2012 – the ninth anniversary of his disappearance, and while the family were finally able to say goodbye to their son and brother, it's left a gaping hole in their lives.

Daniel's 28th birthday would have been on December 19 this year.

I guarantee he was there in spirit. Time goes so fast.

I imagine the last thing any new bride wants or needs to see is her wedding pics in the media.....associated with an horrific murder.

Congratulations to the happy couple. You look like you had the most beautiful day.

Agreed. Don’t think we needed a picture of the criminal in there, either.

You don’t kniw.......They may have wanted to pay tribute to him.