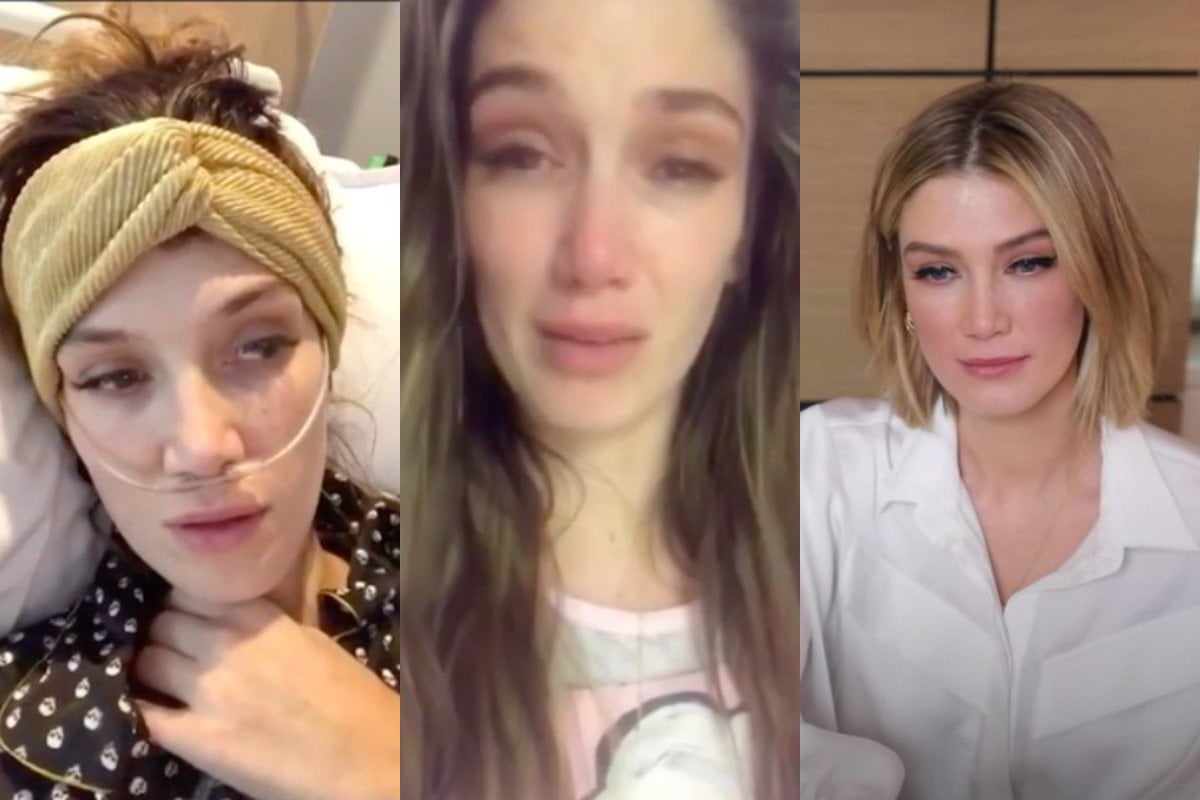 In mid-July, Australian singer-songwriter Delta Goodrem shared a single from her sixth album.

In a press release at the time she wrote, "'Paralyzed' is a narrative of when your whole world stops and has to be reset".

While the description alluded to a struggle in Delta's life, it didn't go into detail. Many might have assumed she was talking about her battle with Hodgkin's lymphoma at the age of just 18.

A month later, the 35-year-old shared what she's been living with for the past nearly two years in an emotional and intimate six-minute video on her Instagram.

As a songwriter, I write songs from my own experiences. I tell stories about the path I have been on, wondering if anyone else has been on a similar journey. The first step in writing this new record was a personal transformation that I didn't know I needed in my life! Even though, as I am sharing today, it was a challenging one - I learned so much and I’m so grateful to be here healthy, happy and singing away :) ⠀ ⠀ I share this with you as an artist sharing where the poetry in this song comes from and as a human who deeply feels and understands that everyone has their own story and their own challenges they are overcoming each day. You never know what someone is going through and this is an extremely hard time for people. So I send this story to you with the message of hope and love. Getting through the tough times is hard, but “with a little time and a little hope, with a little light you never know. For a little space, for a lot of love, close your eyes and think of a better time, big dreams; open your mind for you to find a little strength inside. Stop and rewind”. ⠀ ⠀ Love & Light, Delta Xx

In October 2018, Delta had surgery to remove her salivary gland, and complications during the operation led to the paralysis of a nerve in her tongue.

She woke up to find she had lost the ability to control her speech.

In a video taken while still in her hospital bed, Delta told the camera: "I'm taking this as like a rebirth thing. That's what it means. Rebirth....34."

When a nerve is damaged there's no predicting when or if it will recover and Delta started daily speech therapy in an effort to learn how to speak again.

"I don't want to go out. I'm super embarrassed. I'm just over it. I'm trying to stay positive... my livelihood is my sound. Trying to decide whether this is getting any better or not. It doesn't feel like it," she said in one clip from early on in her recovery.

The video included a compilation of Delta learning how to get her brain to talk to her tongue again through a series of vocal exercises, a process she said "gets really tiring".

While in recovery, Delta started writing her sixth album, sharing her experience in her lyrics:

When did I become so numb?
When did I lose myself?
All the words that leave my tongue
Feel like they came from someone else

What I Eat When
ADVERTISEMENT
Video via Vevo.

Despite recording the entire album, Delta doesn't think she will ever sound the same again.

"I am still a bit confused at how it feels a little bit different to sing now. I am still finding that new space, so that's a little bit heartbreaking," she said in the video.

"They said it would take a year [to recover]. And it has. I don't think it's gonna fully be the same as it as before."

Although Delta returned to The Voice in early 2019, this week she opened up about how she was still struggling.

“I didn’t know if I’d make it before it was time to film,” she told the Courier Mail.

“I knew I had that goal coming up, I needed it to get better. I was working very hard behind the scenes with my speech therapist.

"The wonderful team at The Voice knew what was going on, they were very cognisant that if I got a little bit tired and maybe didn’t make as much sense we’d repeat it."

She went on to explain why people may have missed the changes to her voice, saying: “The voice is a really intricate thing, so while someone else might not be able to hear it, as a singer I know every single little nuance and sound that goes on with my voice.

"You can imagine some of the thoughts in my head, but I’m really proud of the hard work I did with my speech therapist, and it continued after The Voice finished that year, to be where I am now on the other side of it and staying positive.”

Since releasing her speech therapy journey in August, Goodrem has been flooded with feedback from fans, and those with similar experiences.

“I hoped that it would give people strength, you truly never know what someone is going through. This was something really private for me, but it’s what inspired the birth of the new album, the transformation and the reset I’d gone through and I wanted the fans to understand why there’d been a break between me making new music.

“But I got all these people telling me what they’d been through, talking about their own communication challenges.”

So this week, she and her speech therapist, Theresa Dodds, released a video where they discussed speech disorders with people who had shared speech and communication issues.

The pair spoke candidly with other Australian's about their experiences, and what keeps them going.

"I know I would have loved to have seen a video like that when I was going through my own journey because I couldn’t find anything like that."

Reply
Upvote
1 upvotes
I need to know why she was getting a salivary gland out? Is she sick?
H
hopey a year ago