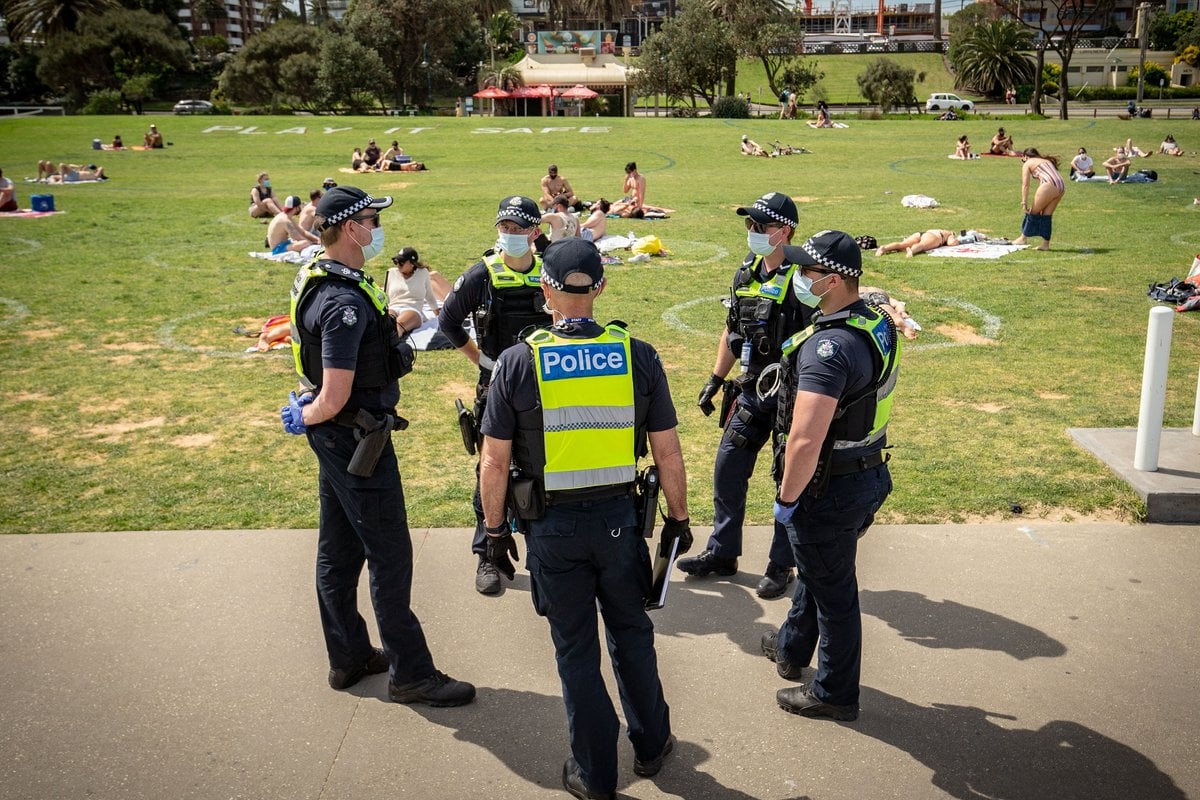 I, along with many Australians, watched Friday’s news report as crowds of Melbourne beachgoers gathered at St Kilda Beach, ignoring the mandatory state-wide social distancing and mask wearing regulations.

As accounts of similar scenes at other Melbourne beaches were described by a Channel Seven reporter, I watched on as one man from the crowd approached him on air without a mask and kissed him on the cheek, then I turned my television off.

I did this not because I was angry like Premier Andrews watching these scenes, or like Chief Health Officer Brett Sutton, who described their behaviour as "stupid, insulting and risky."

I wasn’t even frustrated at their reaction about 'keeping Melburnians stuck at home' until next year - a response which was labelled knee jerk by some, including comedian Dave Hughes.

So ch7 reporter does Fri night cross on rarely warm St Kilda beach in which he gathers excited drunken people around him, yells ‘How good is this?’ and they perform on cue, and now @DanielAndrewsMP & @VictorianCHO threaten to keep all Melbournians stuck at home for rest of year?

Instead, I just felt despondent. As if the views I had been internalising, hoping to be wrong, had instead been proven correct.

Because the truth is, these beach scenes weren’t isolated at all. Many, many Victorians are becoming complacent. I have seen it firsthand.

As a regional Victorian, I have watched for weeks as many around me have seemingly taken the recent loosening of restrictions as a sign that we don’t have to worry anymore.

They have heard words of praise from the Premier and our Health Department of doing a “great job” and seemingly interpreted this to mean we no longer have to.

That due to their best efforts for these past months, and because the restrictions have loosened, it means it is okay to just forget them all.

On several occasions when I have left the house for my daily walk, I have passed others who weren't wearing a mask.

When I walked by one or two non-mask wearing strollers, I gave them the benefit of the doubt and assumed it was for genuine reasons like a health issue related to breathing. But after the fifth in the space of a 40-minute walk, genuine reasons seemed less likely and complacency seemed more of an accurate assumption.

I saw it as I met a friend at a local café, the first time I have been able to sit down at one for months and enjoy a coffee with anyone.

As we relaxed in the courtyard, slipping our masks down below our chins to sip on coffees, the area that had a sign stating there was a capacity of 10 permitted in the area, was soon filled with at least 12 others, plus my friend and I, all taking their masks off to eat food and drink their drinks. While there was some space, there wasn’t a lot, and leaving it involved literally squeezing through a small gap between the group to exit.

Then, as I went on a much-needed short break away to another Victorian city over the school holidays, I saw it there too.

During my time staying at a holiday park, despite the regular police checks of the ground, the rules of social distancing and mask wearing were ignored daily.

Around the park adults would walk in groups, not social distancing and with no face masks in sight.

Pool-side, as I watched my kids swim, my mask on my face, many other adults supervising their children (or just relaxing on a banana lounges in the sun) did so without masks. As families recognised their holiday park friends, they would come over and sit next to them, chatting without face protection.

Slowly the area that had a capacity of 20 would fill up until I could count at least 20 in the pool itself, let alone those who sat around it watching on.

I could add to the list with several other experiences from recent weeks, from shopping at my local grocery store to having my hair cut at the salon. But it seems irrelevant to note the location or what rules apply.

While I would love to join in with Dave Hughes and say that what was shown on that report was isolated, the truth is it wasn't at all. There are more and more people pushing the limits of social distancing and mask wearing, rules there for our own health and safety.

The sad reality is that after months and months of restrictions, just as they are being lifted and finally we are able to see a faint light at the end of what has been a very dark and gloomy tunnel, instead of sticking with it and doing what we need to do to get the job done, many Victorians are becoming complacent.

They just aren’t all captured by a news crew.

Reply
Upvote
It seems like people can't understand that we must stay 1.5 m away from anyone who is not part of our household. I live near a Melbourne beach and every day I say groups of five trying to socialise responsibly, but they are barely a metre apart. I was happy to see media reporting the use of drawn circles as a clue, but people seem to think that the aim is to socialise within the circle. That won't stop the spread. People need to space out on the edge of the circle. I don't have kids, but if I did I'd be spending the holidays encouraging them to practice social distancing using a towel to remind them to keep their distance. I've said similar things on FB and people have accused me of suffering Stockholm Syndrome and being unable to think for myself. If we could keep our distance, maybe the virus would stop spreading and the Government would trust us more and ease restrictions. The reality is that we need to learn and practice being "far talkers": the complete opposite of Seinfeld's close talker.
A
anonymous 2 years ago

Reply
Upvote
I live on the Mornington Peninsula and have been under constant pressure from my kids to allow them to join their friends whose parents are allowing them to gather in groups and get together. It has been incredibly difficult trying to teach your children to do the right thing when many parents teach their children that laws can be ignored.
News
General
Opinion
True Crime
Politics
Sport
Explainer
Entertainment
Celebrity
Reality TV
Movies
TV
Books
Rogue
Royal
Lifestyle
Beauty
Fashion
Weddings
Home
Wellness
Health
Fitness
Travel
Food
Parents
Before The Bump
Pregnancy
Baby
Kids
Teens
School
Parent Opinion
Work & Money
Money
Finance
Career
Lady Startup
Relationships
Sex
Dating
Separation
Friendship
Family
Real Life
Couples