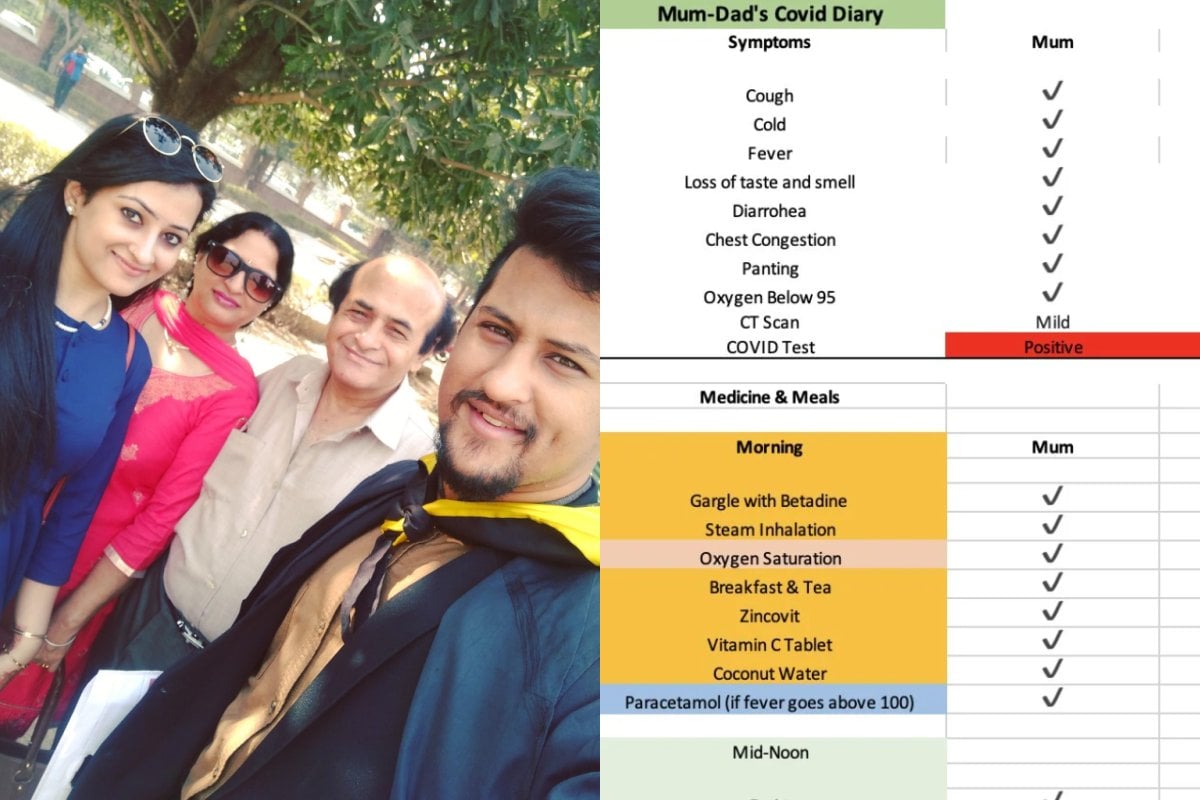 It was a regular morning in late April.

I had just gotten off a work call, ticking through my long to-do list, when I received a WhatsApp text from my younger brother, who lives with my parents in New Delhi.

It was the time when India's devastating COVID-19 wave with the Delta variant had hit its peak.

The country was going through its worst phase, with social platforms screaming about oxygen cylinders and blood plasma.

I'd felt blessed every morning not waking up to some emergency text or call from home, except that day I did.

When my brother texted around 9am asking me to call him as soon as I got his message, I knew something was not right. I immediately called him to hear what I feared - dad had contracted the virus.

My mum and dad had gotten their first jab and were waiting for the second dose when the uncontrollable second wave emerged in India.

Dad had started to show the early symptoms of a rough cough and fever - symptoms of the same monster that had been killing people close to me.

So many people I knew are now no more - five in our own circle. There was no chance we were going to take this lightly. My dad has Type-1 Diabetes and has been a heart patient as well, so you can imagine my horror when you attach these two conditions to the deadly virus.

The odds were pretty much unimaginable. Without wasting time waiting for his Covid test results, my dad was immediately asked to self-isolate.

He developed a nasty cough, but my mum convinced me he would be alright. She's a natural-remedy lover, so I knew she'd already started on those rituals. It was all going to be okay; I remember assuring myself of that.

But on the second day, my mum woke up to an upset stomach and diarrhoea.

When my brother called to inform me about mum the next day, my first reaction was mad laughter, followed by a panic attack, because I had just googled the new symptoms of the Delta variant, and diarrhoea lead the pack.

We made all the arrangements for the Covid test (against my mum's wishes, who was dreading the swab up her nose and down the throat). They both tested positive.

It was my worst nightmare realised.

India's national capital Delhi, and its financial capital Mumbai, were among the cities that battled the COVID-19 surge, both in the first and second phases. This resulted in a catastrophic situation - the health system had collapsed.

Finding a hospital bed became an impossible task. I had been reading stories on how severe the consequences could be when there was no assistance.

Here's the frightening truth about the Delta variant: It is the most contagious version of the coronavirus and spreads faster than the original version, causing an incomparable affinity to lung tissues.

Chances are, grave damage has already been done when a person is infected with this strain of the virus.

The Australian borders had already been shut down, and India's second wave only cemented that decision. I knew my chances of travelling back home were nil.

After several panic attacks and lots of crying, thinking about what the next few days and weeks would entail, I geared up to face reality.

My brother and I became an army. We planned, distributed, and executed our duties.

I knew it was going to be harder for me because long-distance comes with unwelcome anxiety. It's one thing when you're physically present with your loved ones - you know you'll fight the odds, no matter what.

But long distance makes a tricky situation so much harder. 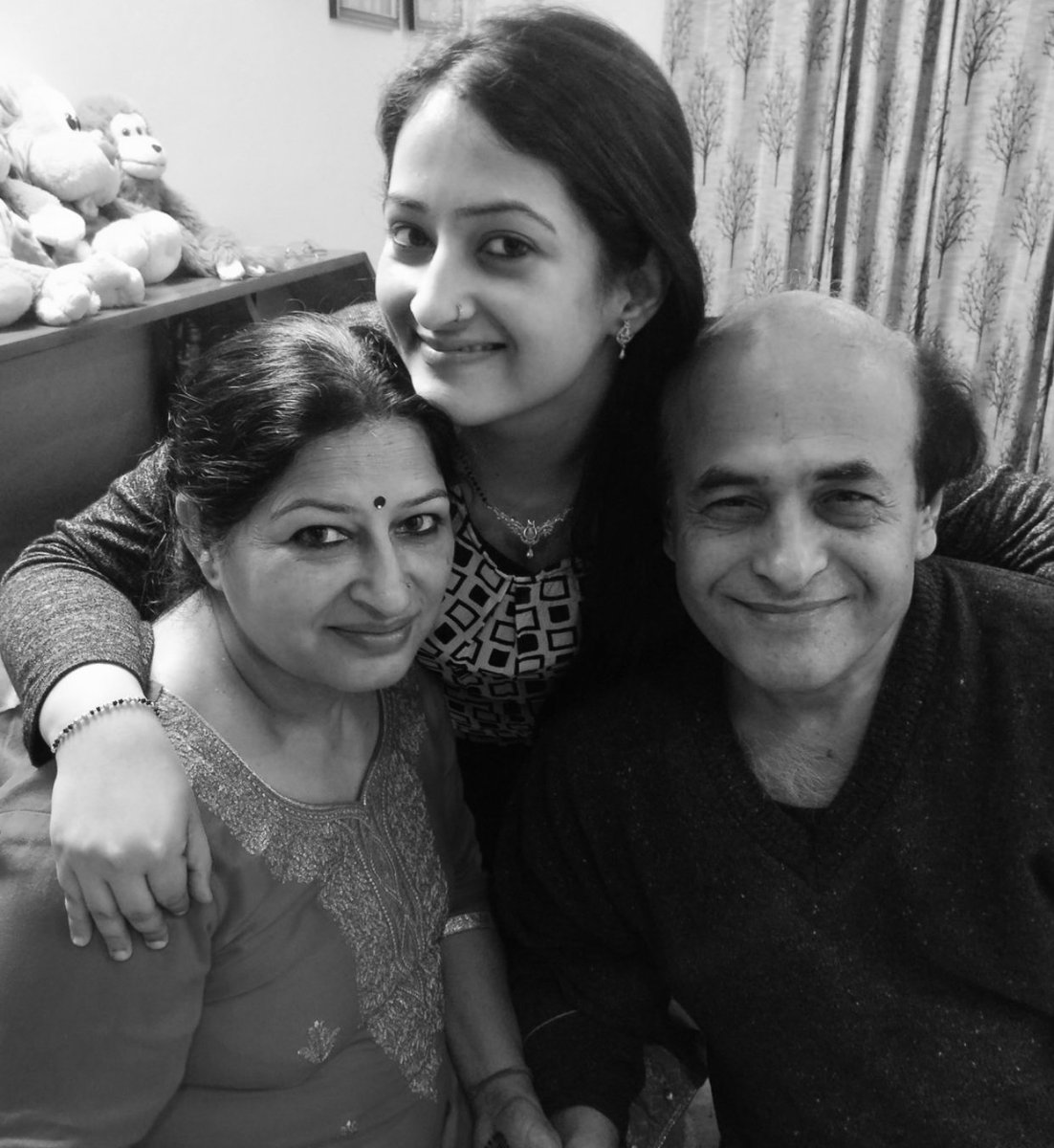 Khyati and her parents. Image: Supplied.

Your mind takes you to all those horrible places you're not supposed to visit. Had it not been for my husband and his undying support, I might not have pulled through during those crucial days.

There's not enough space here to write about all the challenges. It started with buying an accurate Oximeter. Due to the massive demand for oxygen saturation monitors, all the good ones were already snapped up, leaving behind the not so reliable ones.

Thinking something might be better than nothing, I found one that cost me 10 times higher than the original price.

I was continuously on calls, asking friends and extended family if they knew where to get a decent Oximeter from, and when I finally did, it turned out to be crap.

A close friend in Sydney was aware of my situation, and made some calls to arrange for a new one to be delivered from a different city. It took three days to arrive.

The next challenge was to find a good cook who could cater to the needs of Covid patients (my brother is great at many things, but sadly cooking isn't one of them.)

We had no choice: we had to outsource the food. I found a place that specialised in delivering Covid-safe meals, and after trialling them for two days, my mum (who had lost her taste and smell) complained of too much oil and salt in the food.

I stopped the supply and stalked a few families in the neighbourhood who were also grappling with the virus, like us.

A thoughtful friend gave me the contact of a wonderful lady who had been cooking for them. I called her up and explained the situation. She was so understanding, patient and warm - just what I was looking for.

Her exact words to me were, "Don't worry, my girl, your parents will recover in no time. Let's give them the right nutrition."

She exactly knew what meals to provide for a person suffering from COVID-19, and in what quantities.

In the days to come, we made a plan. It covered everything from food to medicines to regular oxygen monitoring.

I created an Excel sheet and recorded my parents' vitals and the medications attached to their respective symptoms.

I became a robot affixed to a laptop, grabbing every new piece of information I could lay my hands on (this helped prepare me for the worst). 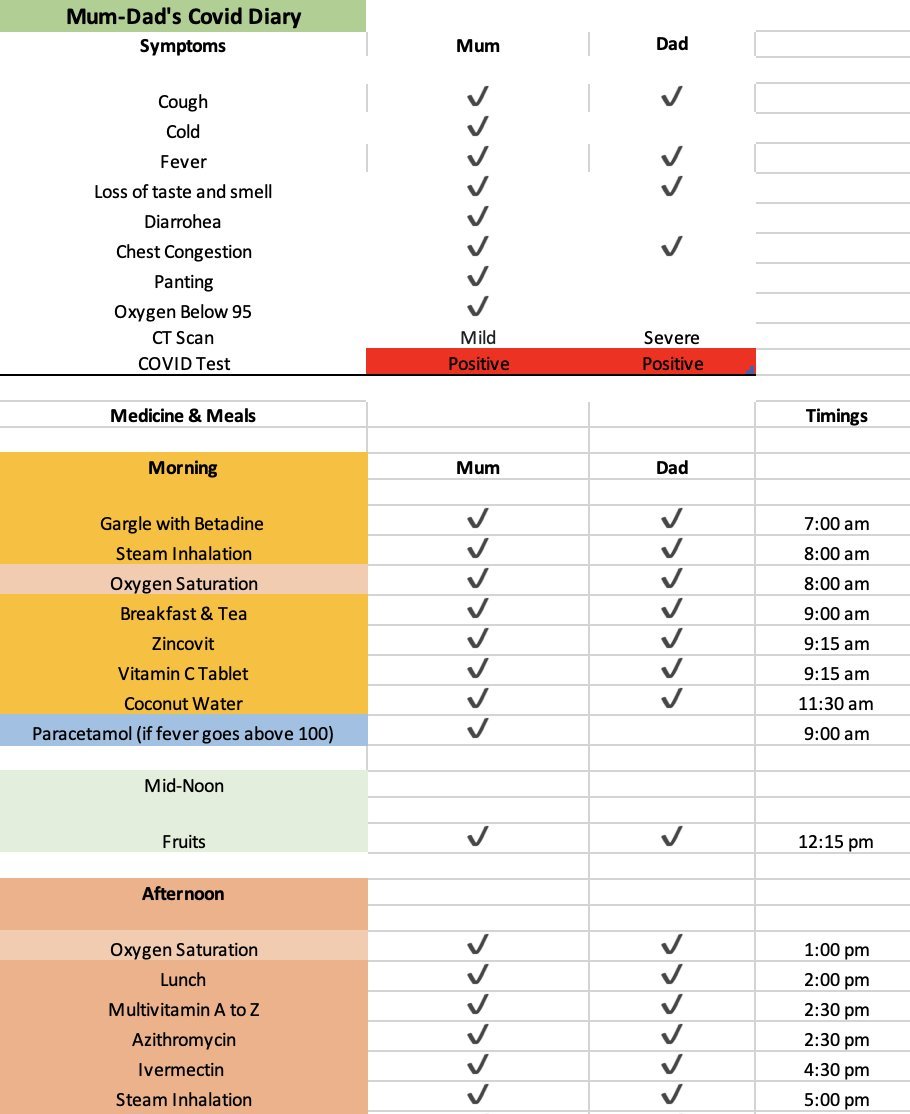 I was sleeping during Indian Standard Time and waking up to the Australian one.

It was initially decided that they would stay in two separate rooms and complete the self-isolation process, but my mum was adamant about being kept in the same room with dad. The effect of the virus is not just physical; it takes a toll on your mental wellbeing, too.

We understood that sensitivity, so we let them stay together. They seemed more positive this way.

My brother had already contracted the virus during the first wave, with low to mild symptoms. Luckily, two weeks before dad showed his first symptoms, my brother had gotten his antibodies test, so we knew for sure that he was at a low virus risk this time around.

He looked after our parents with the utmost sincerity and pacified his anxious sister when it was duly needed (this happened a lot.)

Every morning I waited for my brother's calls, asking him to switch on the video and show me our parents' precious faces. I have never been so thankful for technology.

My parents didn't have the energy for a simple hello, but at least I could see them. It broke my heart to see them lying almost unconscious, in a very fragile state.

Not so long ago, I read a remarkable memoir, How to Be Australian by Ashley Kalagian Blunt, where she spoke about the gripping fear of losing a loved one while you're living a minimum twelve-hour flight away from them.

That fear never felt more real to me.

Surprisingly, my dad's reports revealed a higher infection than my mum's, but his symptoms were getting better.

Thanks to my darling cousin, who shipped some Ayurvedic medicines their way, his chest congestion was easing up. He was communicating on calls with me, so I was a bit relieved on that front. But my mum, who had a mild infection, was developing more serious symptoms each day.

Her fever was over 103, oxygen saturation was alarmingly low (it hit 87 at one point), and we feared that she might have to be taken to the hospital.

One day I asked my brother to let me speak with her for just two minutes, and he told me she was too weak.

In the two years since I moved to Australia, each day I would wake up to her loving WhatsApp messages. Her voice notes were my solace. Now, I hadn't heard from her in more than ten days. 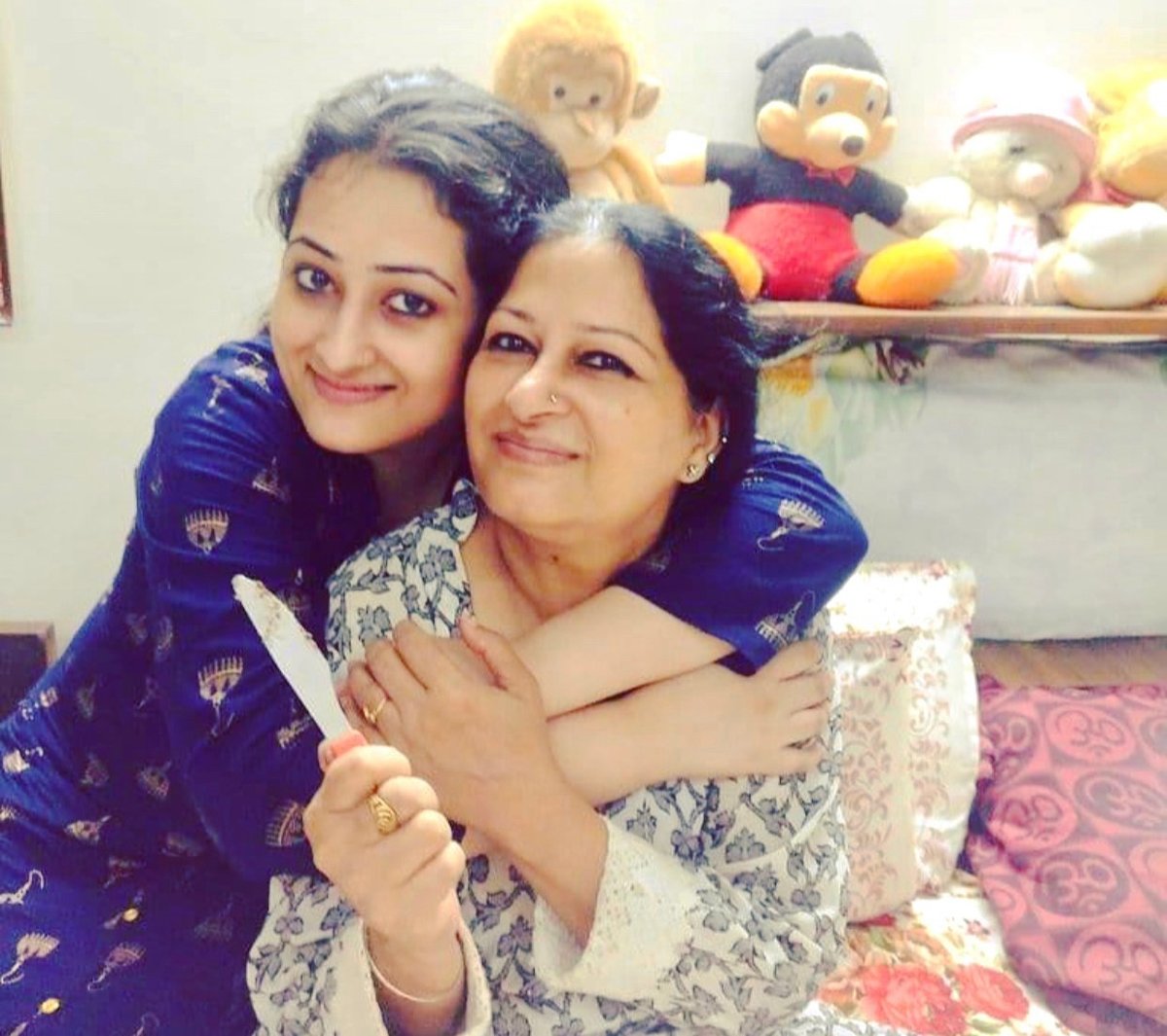 The memory of speaking to mum when she could finally hold a phone is still so fresh in my mind. I had missed her so much.

The first thing she asked was whether I was eating, drinking three litres of water a day, and not troubling my husband. With that, I knew that the worst was over.

It had been the worst eighteen days of my life.

Not being able to travel when your family needs you has been one of the great cruelties of this pandemic. Nobody relocates to a new destination thinking they may never be allowed to travel back. I could only deal with my situation because of our willingness to step up, take on responsibilities and prioritise what mattered.

Today, my parents have fully recovered from the life-threatening disease and are making their way back to their regular routine.

When you're separated from family, it can seem like you'll never be together again. But you can still hope and plan for the future. You can look forward to things to come.

While nothing can replace the joy of being together in person, hearing their voices and seeing their lovely faces on the family WhatsApp group helps.

This post is one person's experience and should not be used as health advice.

mccourt a month ago