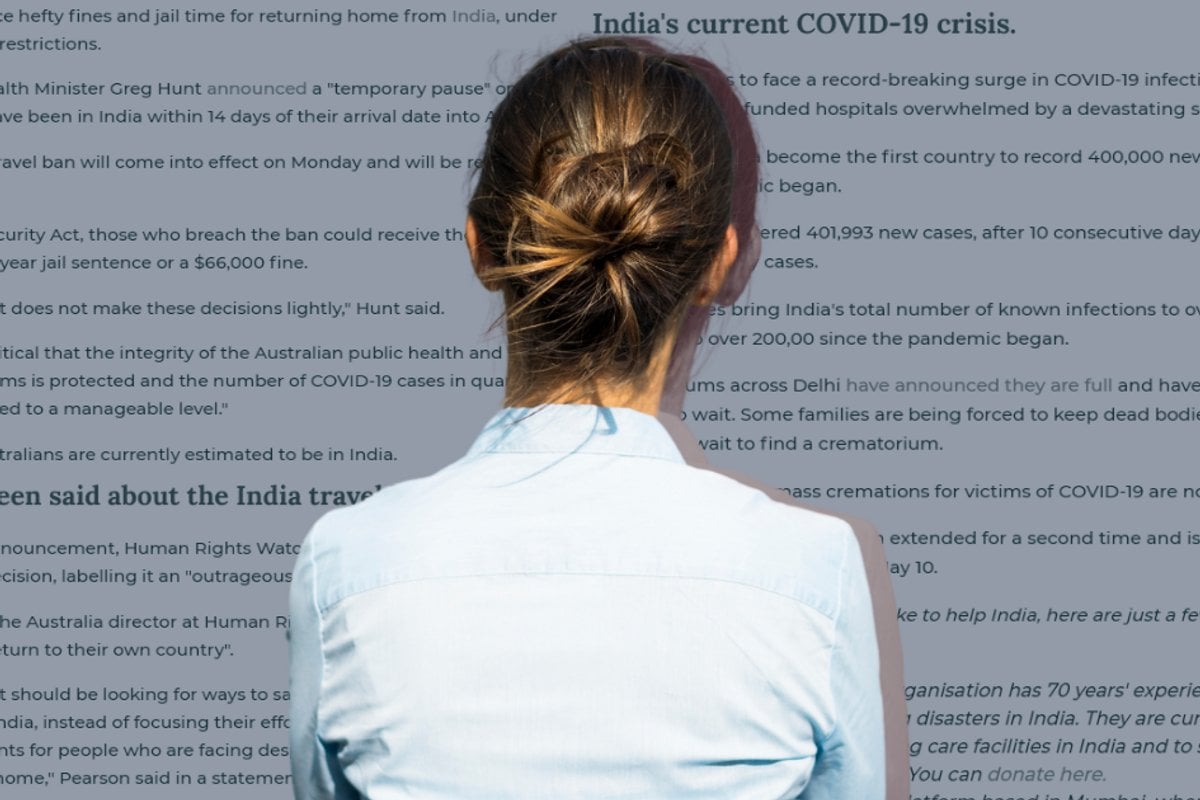 My husband, our two teenagers and I have been living here for just under two years as expats.

My husband has a two-year employment contract which will finish at the end of June.

We came to India excited about exploring its unique culture(s) and visiting the different regions. We had five amazing months of incredible India before the pandemic hit.

During the recent Easter holidays, we were informed by the International School that my kids attend, that school would be online for the rest of the school year, which finishes in mid-June.

Most Indian children have not been to school all year and can’t afford the devices to give them access to online school.

The decision to do online school for the remainder of the school year means that we (myself and the kids) don’t have to stay in India anymore.

My work is portable and the kids can log into their online schooling from anywhere.

The school day would be 1pm-8pm in Australia (East Coast) instead of 8:30am-3:30pm in Mumbai, but they’re teenagers and they’d probably prefer that schedule.

After the Easter holidays, we started making plans to leave. It would not be a temporary departure, it would be permanent.

We booked flights for four weeks’ time, giving us plenty of time to organise everything and pack up. There was no rush, or so I thought. We were looking forward to returning to Australia.

After 15 months in densely populated Mumbai, we were excited to spend time with my parents in their relatively small Central Coast town.

We needed to refresh, re-centre and take in the beautiful fresh air, see family and reconnect. My dad has dementia and I haven’t seen him in two years. My kids miss their cousins and their grandparents.

To those who say that we could have returned to Australia any time in the last 18 months, you have obviously never been an expat, but also, why would we?

It’s not easy to do international moves. We were five months into a 24 month posting when the pandemic kicked off.

Our teenagers were just getting settled into their school and starting to make friends. India handled the first wave better than some Western countries. There was no medical crisis in 2020.

There were plenty of hospital beds and oxygen tanks available. We have jobs here and friends and a community. At the beginning of 2021, things were looking up.

While friends in Europe were in strict lockdowns, our school was preparing to get the kids back on campus for the first time since mid-March 2020. We planned to hang on and try to finish our contract.

Then things started to get shaky.

A good friend flew back to Australia via Dubai in late April. She found out that she was on the last Emirates flight out of India before Emirates cancelled all of its flights to and from India.

Another friend flew to Australia via Doha with Qatar Airways and found out that she was one of the last passengers to be allowed in from India on that airline.

I kicked myself for not booking flights earlier, but how could I have predicted that the Australian government would abandon us? I never in my wildest dreams imagined that Australia would stop me from coming home.

My husband and I met at University in Australia, but he is Swiss.

We are very lucky that the kids and I have dual nationality. Switzerland has banned flights from India, just as Australia has, but they will let us in (if we fly via another country) because we are Swiss.

A country NEEDS to take care of its own citizens. Switzerland has a quarantine system similar to many other countries, such as Canada.

When we arrive, we will stay in a rented apartment for two weeks. Every day someone will call our landline or drop by in person at a random time to make sure that we are at home and inside.

We are not alone in our situation in Mumbai.

Our neighbour is also Australian, from the NSW south coast, and his wife is from Hong Kong.

He’s incredibly stressed at the moment, because he can’t get into Australia or Hong Kong. He has two primary school aged children. Where should he take them?

One of Australia’s reasons for implementing this ban on arrivals from India is that its quarantine system and health system can’t handle the volume of infected passengers arriving from India.

This was not an issue in 2020 when the UK and USA had huge numbers of cases. Where was the ban then? How long has this pandemic been going on? 14-15 months. Surely Australia could have worked out an effective quarantine system in this time.

At a time when the Australian government needs to be showing humanity, to turn their back on Australian citizens in India is inhumane.

This is the inside cover of my Australian passport. 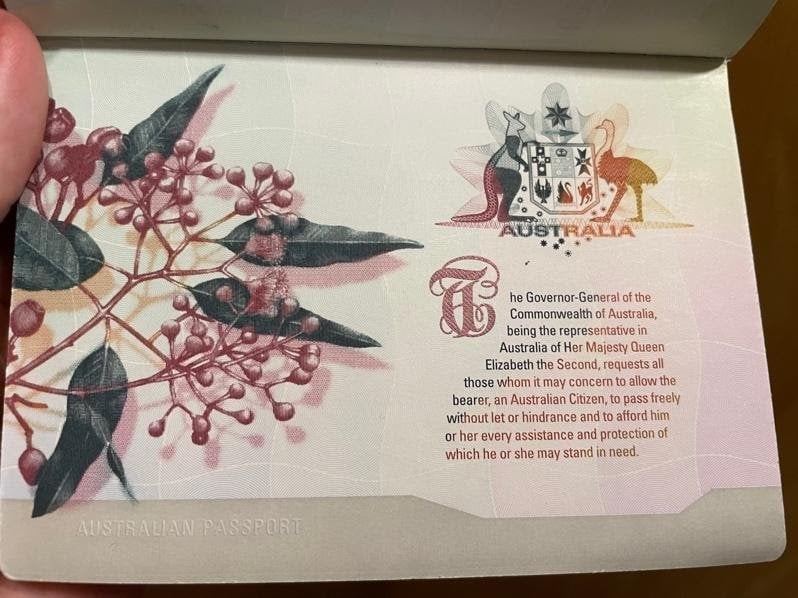 “The Governor-General of the Commonwealth of Australia, being the representative in Australia of Her Majesty the Queen Elizabeth the Second, requests all those whom it may concern to allow the bearer, an Australian Citizen, to pass freely without let or hindrance and to afford him or her every assistance and protection of which he or she may stand in need.”

Article 13.2 of the UN’s Universal Declaration of Human Rights says “Everyone has the right to leave any country, including his own, and to return to his country.” There will be future legal ramifications for Australia.

I am proud to be Australian, but I’m very disappointed in my country right now.

Rachel Franzen is originally from Canberra but has been living the ex-pat life since graduating from University in 1998. Rachel has been living life to the fullest in Europe, the Middle East, and Asia, together with her Swiss husband and two Dubai-born, dual-national children. Rachel works part-time as a proofreader, dance teacher, and costume-maker. This is her first piece for Mamamia.

Reply
Upvote
We endured a long, deeply distressing lockdown to successfully eliminate the virus from our community. The only way it can come back in is via returned travellers. We - those who chose to stay here in Oz, spend our money here, raise our families here - have earned the right to say: close the borders. You chose to roll the dice, living o/s. You take the good with the bad. Your passport doesn't automatically supersede a global, once in a lifetime pandemic. (also, didn't India ban flights from the UK at one point? No one is calling them racist or heavy-handed).

Reply
Upvote
5 upvotes
There are so, so many countries that let their guard down and allowed a vicious second wave to overwhelm their hospitals and mass deaths ensued.
Australia has the absolute capacity for this to happen to us, we are not so blindly lucky that this wouldn't be our fate.

I read through the comments below and see a theme of complacency and a belief that our ability to quell another mass outbreak is somehow superior to other countries.
I'll say this outright, the flight that suddenly had an inordinate number of infected passengers when hitting Australia, that tested negatively in India, highlights the potential for a corrupted testing process in a country where being rich can undoubtedly grease a lot of wheels.
I support the notion of beefing up our quarantine facilities and taking them out of population centres, and then allowing citizens back in a measured way, with most-at-risk demographics given priority. This seems to be the plan being executed by the government now.
My politics tend to the left, but I think that some on the left are unduly politicising a medical issue, to their country's detriment.
News
General
Opinion
True Crime
Politics
Sport
Explainer
Entertainment
Celebrity
Reality TV
Movies
TV
Books
Rogue
Royal
Lifestyle
Beauty
Fashion
Weddings
Home
Wellness
Health
Fitness
Travel
Food
Parents
Before The Bump
Pregnancy
Baby
Kids
Teens
School
Parent Opinion
Work & Money
Money
Finance
Career
Lady Startup
Relationships
Sex
Dating
Separation
Friendship
Family
Real Life
Couples