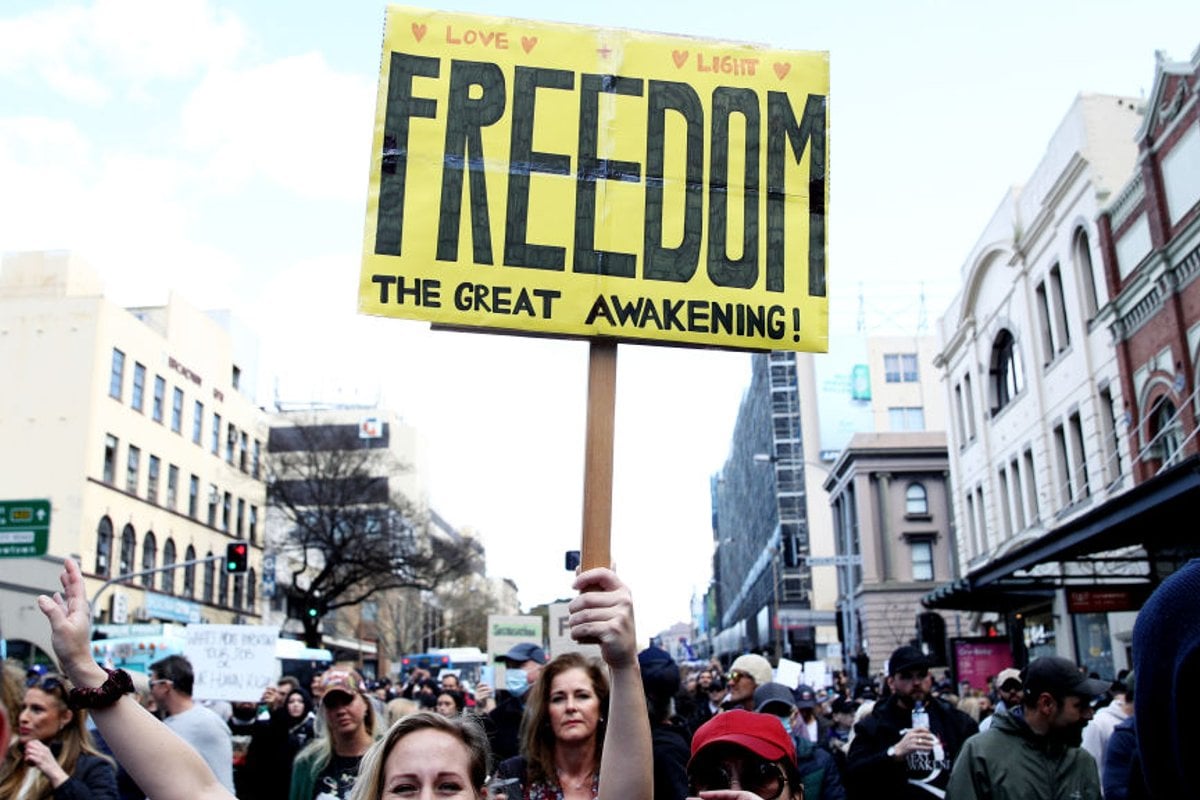 My 23-year-old son attended the protest in Sydney on Saturday, and this is how I feel.

I am scared. Scared that he may contract COVID because he wasn’t wearing a mask. And I'm scared that he could transmit it to his housemates.

I am angry that due to his actions and those of thousands of others, we are likely to see this virus spread exponentially and won’t see the end of lockdown for many months.

I feel ashamed. Questioning myself and my parenting skills. What did I do wrong that has led him to this?

I am sad. Essentially, my relationship with my son is now tenuous. My beautiful, smart boy who used to be able to finish my sentences, and I his.

But most of all, I feel helpless.

12 months ago we had a strange conversation.

He told me that the reason Melbourne had gone back into lockdown was so the military could move in and release all the kidnapped children who were being kept in tunnels under Melbourne.

When I questioned him further, he told me that there was a satanic cabal of serpent people who were ruling the world. This was my introduction to QAnon.

He sent me a six-hour video which I dutifully watched.

It was full of random ‘facts’ that had been drawn together into a narrative.

My understanding of what he believes is that there is a satanic cabal that has infiltrated our governments, media and all parts of the economy in order to keep us prisoners on this earth without achieving our full spiritual potential.

Apparently, the conditions for this full spiritual potential or ‘awakening’, on a mass scale, are occurring right now.

The lockdowns and the vaccine are how the cabal is trying to prevent us all from taking part in the awakening.

Why would they want to do that? Because after the awakening everyone will be equal and all the worlds’ wealth will be distributed evenly, no one will need to work and we will all have ‘super human’ abilities.

Not something the cabal wants to see.

Prior to lockdown last year, my son was an average 22-year-old male.

Looking forward to his final year at uni, working a part-time job in hospitality, going to the gym and partying with his mates.

Then lockdown hit. And for whatever reason, I think he started to look for answers explaining what was happening in the world, and in doing so, he tipped over the edge and suspended all disbelief.

And what can I do to help him? It seems, absolutely nothing.

I have read books, I have watched expert interviews and listened to podcasts, I have joined Reddit groups for people whose loved ones are QAnon believers.

This is what I have found out. He is essentially trapped in a cult. But I cannot go and ‘kidnap’ my son and physically remove him from the people feeding him this information.

The information is constantly available to him, he feeds off it on the dark web. Algorithms continue serving him more and more of the information.

The process of delivering the information is gamified.

Each believer needs to seek out clues and information in order to educate themselves.

As a young teenager my son devoured the 39 Clues series of books which operated in a similar way. I am not surprised he enjoys this hunt for new information.

You cannot argue the ‘facts’ with him. Any fact I offer is tainted by its source from mainstream media or Google who are 'all in on it'.

It is apparently counter-productive to argue the facts anyhow, as when they argue their ‘facts’ it further entrenches them in their beliefs. If a forecasted event doesn’t occur they just change the narrative to make it fit.

Exposing them to ‘normal life’ is to be encouraged so they continue to have some access to normality. Though this is made ever more difficult when all they want to try to do is convert you or ‘red pill’ you to their beliefs.

My son truly believes that he is one of the very few who has become awakened and has a duty to educate the rest of us.

He firmly believes that attending the protest yesterday is for the benefit of mankind. He does not see that he has put anyone, including himself at risk. He believes COVID is a hoax, perpetrated by the cabal.

In fact, he thinks there will come a point in time when we will be thanking him for taking up this cause on our behalf.

Fine him or take police action? You are just making him a martyr to his cause.

I am not arguing that he should not be hit with these consequences for what he did this weekend. I am just making it clear that it will not stop people who, like him, are living in a different reality than the rest of us.

I’m sure not everyone who attended the protest yesterday are living in that separate reality, but I saw enough slogans and signs to see that a lot of people are.

I am heartbroken knowing that there are thousands of other loving families out there who have ‘lost’ a family member to this cult just like I have.

Who have been looking for a way to help their loved one climb out, with no success. Who are sitting at home feeling shame and being too scared to talk about this issue for fear of being ridiculed.

The real story of QAnon is not whether Scomo’s mate tried to influence him to say the term ‘ritual abuse’ in his National Apology to Victims and Survivors of Institutional Child Sexual Abuse, it is a story of the thousands of people, like my son, who are in a cult, without any way of getting out.

It is a story about the thousands of families watching their loved ones go down the rabbit hole, powerless to help.

It is a story about how the internet has created an alternative reality and we are doing nothing about it.

Reply
Upvote
I really recommend the podcast Rabbit Hole to anyone dealing with this. It's a really interesting look at how this happens & includes stories of ways people have managed to break through to people.

Megan Roper's book "Unfollow" is also very enlightening, she left the Westborough Baptist Church after interactions with people on the internet, and one friendship in particular, left her questioning the cult she was in. Sometimes it the tiniest crack in their armour that actually gets through to them and reveals it was all a fraud.
K
krispy a year ago

Reply
Upvote
Wow, great article. I've also got a distant relative with the same beliefs as your son and I've been frustrated/angry/disappointed in their mindset but not close enough to them to look into understanding the "why" behind their reasonings. You have obviously spent a lot of time and effort to look into this because it's your son - how helpless you must feel when any attempt to introduce facts are just seen by him as fake news and part of the 'lamestream media'. I honestly don't know how we can counter their beliefs other than them experiencing covid firsthand to prove it is no hoax  but of course I don't wish anyone to get this illness. You are right, it is a cult, and it's turning our loved ones against us. So very sorry you are having to deal with this firsthand. I will not look at these protestors the same way again after reading your article, the anger and ridicule I have felt is now now tempered by sadness that many, as you say, they are living an alternate reality. (Obviously Still angry at the deliberate troublemakers who are only protesting because they don't want to wear a mask or be in lockdown) Best wishes to you and your son.
News
General
Opinion
True Crime
Politics
Sport
Explainer
Entertainment
Celebrity
Reality TV
Movies
TV
Books
Rogue
Royal
Lifestyle
Beauty
Fashion
Weddings
Home
Wellness
Health
Fitness
Travel
Food
Family
Before The Bump
Pregnancy
Baby
Kids
Teens
School
Parent Opinion
Work & Money
Money
Finance
Career
Lady Startup
Relationships
Sex
Dating
Separation
Friendship
Family
Real Life
Couples