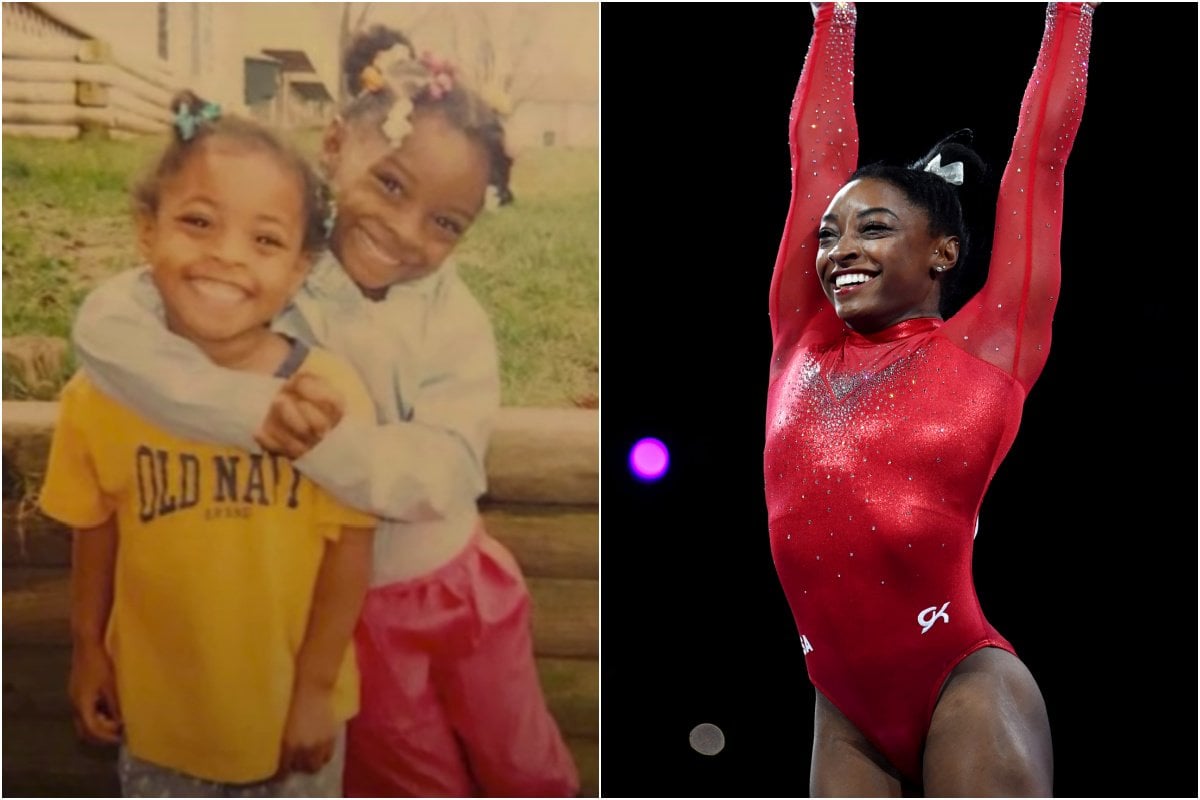 When gymnast Simone Biles competes, you might notice a goat on the back of her bedazzled leotard.

The 24-year-old wears the rhinestone symbol to declare she is the GOAT - the greatest of all time. And the four-foot-eight gymnast undeniably is.

This week, the New York Times noted that Biles is often compared to Serena Williams, Tom Brady and Tiger Woods for her dominance in her sport. But even that doesn't do her justice, the publication pointed out.

"[That] analogy minimises her athletic brilliance because those competitors lose from time to time — and she doesn’t," journalist Juliet Macur wrote. 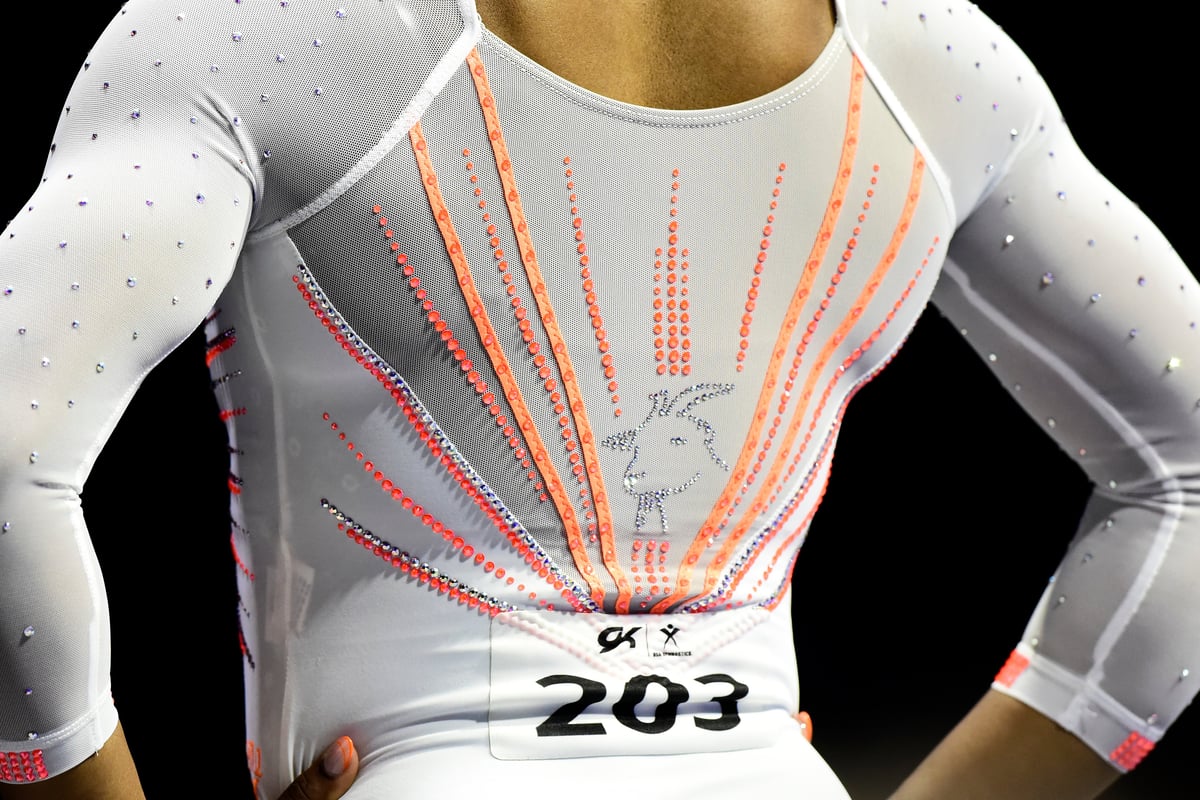 Since 2013, the American gymnast has not lost an all-round title. She's also the only woman who has performed the dangerous Yurchenko double pike in competition - a move she is expected to pull off at the Tokyo Olympics.

In the theme of making history at these Olympics, Biles is also competing to become the first female gymnast in 50 years to win back-to-back titles in the Olympic all-around.

But the path to gymnastics glory has not been an easy ride. Here's what you need to know about Simone Biles.

Alongside her three siblings, Biles was born to a mother who struggled with addiction to drugs and alcohol, as well as an absent father.

She remembers eating cereal with water when she was young, because they could not afford milk.

In her Facebook Watch series, Simone vs Herself, the 24-year-old reflected on her early childhood.

“Growing up, me and my siblings were so focused on food because we didn’t have a lot of food,” she remembers. “I remember there was this cat around the house and I would be so hungry. They would feed this cat and I would be like, ‘Where the heck is my food?’ And so I think that’s [why] I don’t like cats... because this freaking street cat, she always fed it. But she never fed us.”

In 2002, when Biles was aged five, her birth mother lost custody of her four children, who were placed into foster care.

Within 12 months, Biles' maternal grandfather, Ron, and his second wife, Nellie, adopted her and her younger sister, Adria. They both now call Nellie and Ron Mum and Dad. Simone's other two siblings were adopted by Ron's sister. 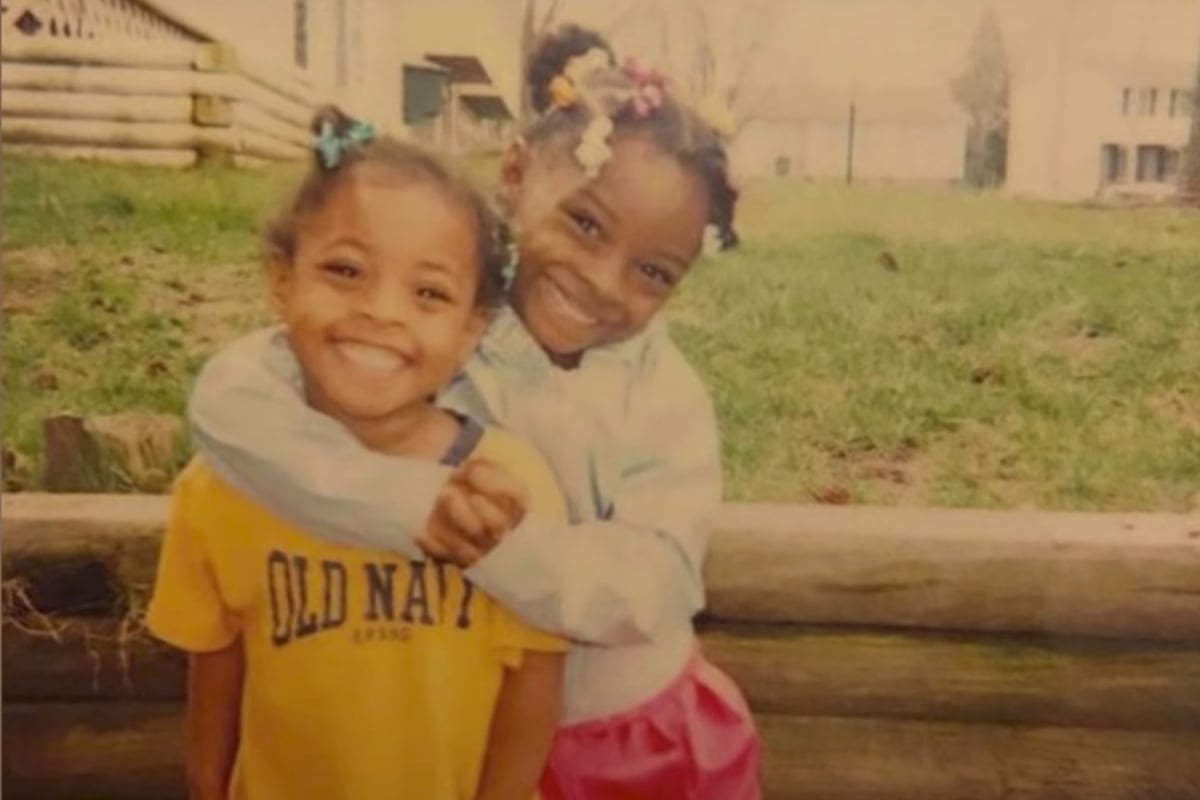 The same year she was adopted, Biles visited a gymnastics centre while on a day-care field trip.

As they played around, one coach noticed Biles' raw and rare talent and sent a letter home to her parents asking if she would be interested in joining their classes.

It quickly became clear just how special her talent was.

In 2016, Biles became a household name worldwide when she won five medals, four of them gold, at the Rio Games.

In her red, white and blue leotard, Biles shone in the spotlight as the then-teenager was hailed as a 'once-in-a-lifetime' athlete. What makes her so great? The gymnast is known for her brilliance in the floor exercise specifically, as well as her willingness to take risks.

Many have called her unbeatable on the floor.

Her Olympic teammate, Sunisa Lee, told the New York Times, "Simone is so good that the rest of us can only hope to finish second to her in the all-around. What else can you do? She does all sorts of crazy things no one else can do."

On Sunday, she started her campaign at the Tokyo Games to become the most decorated gymnast in World Championships and Olympic history. 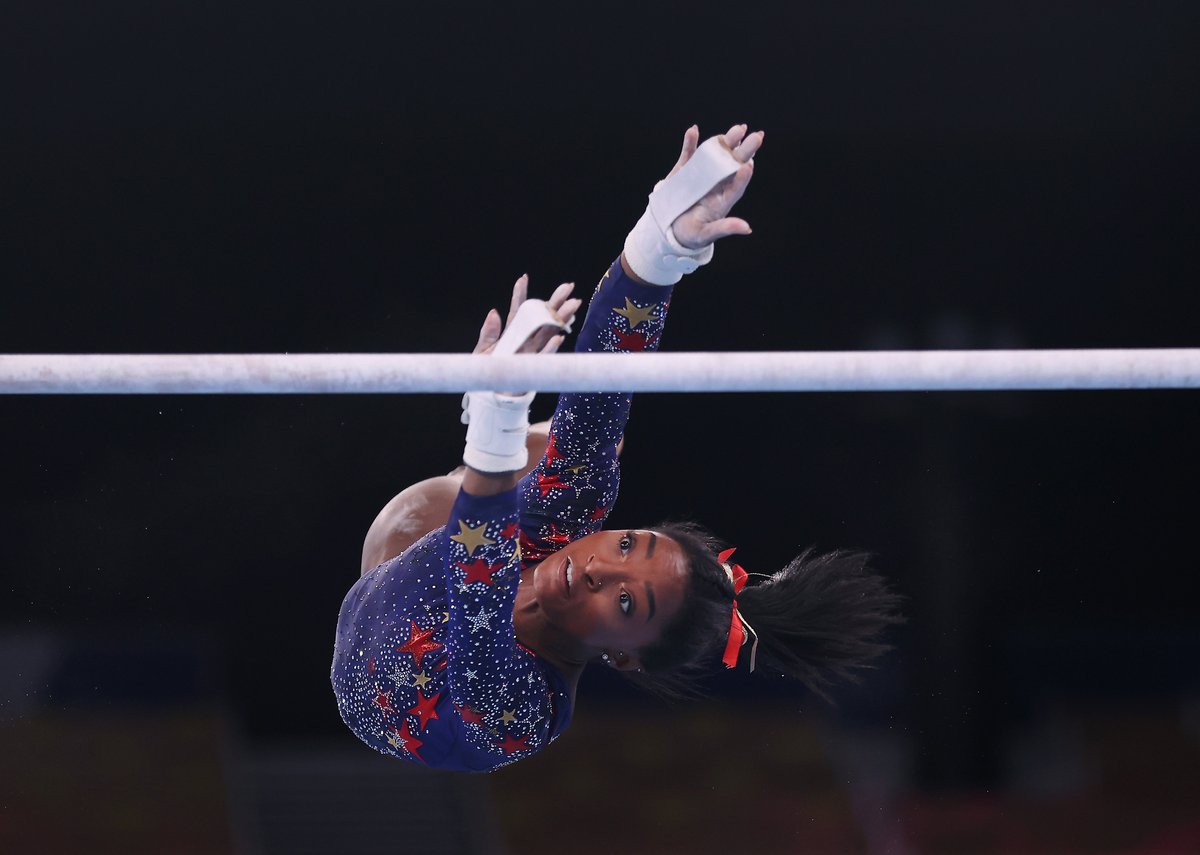 Simone Biles during the Qualifying rounds at the Tokyo Olympics on Sunday. Image: Getty.

He was arrested and charged with murder, homicide, voluntary manslaughter, felonious assault and perjury in relation to the shooting.

Police alleged that an uninvited group walked into a house party and an altercation ensued between the uninvited guests and those who were invited. It resulted in the deaths of three people.

When the news broke, the champion gymnast released a statement asking the public respect her family's privacy as they "deal with [their] pain".

"My heart aches for everyone involved, especially for the victims and their families," she wrote on Twitter. "There is nothing I can say that will heal anyone's pain, but I do want to express my sincere condolences to everyone affected by this terrible tragedy.

But in June this year, Biles-Thomas was acquitted of the murder charges due to insufficient evidence. No one has been found guilty for the murder of the three people.

In January 2018, USA Gymnastics team doctor Larry Nassar was sentenced to 175 years in prison for molesting gymnasts under the guise of giving ‘treatment’.

More than 500 women and girls have accused Nassar of abuse. Simone Biles is one of them. 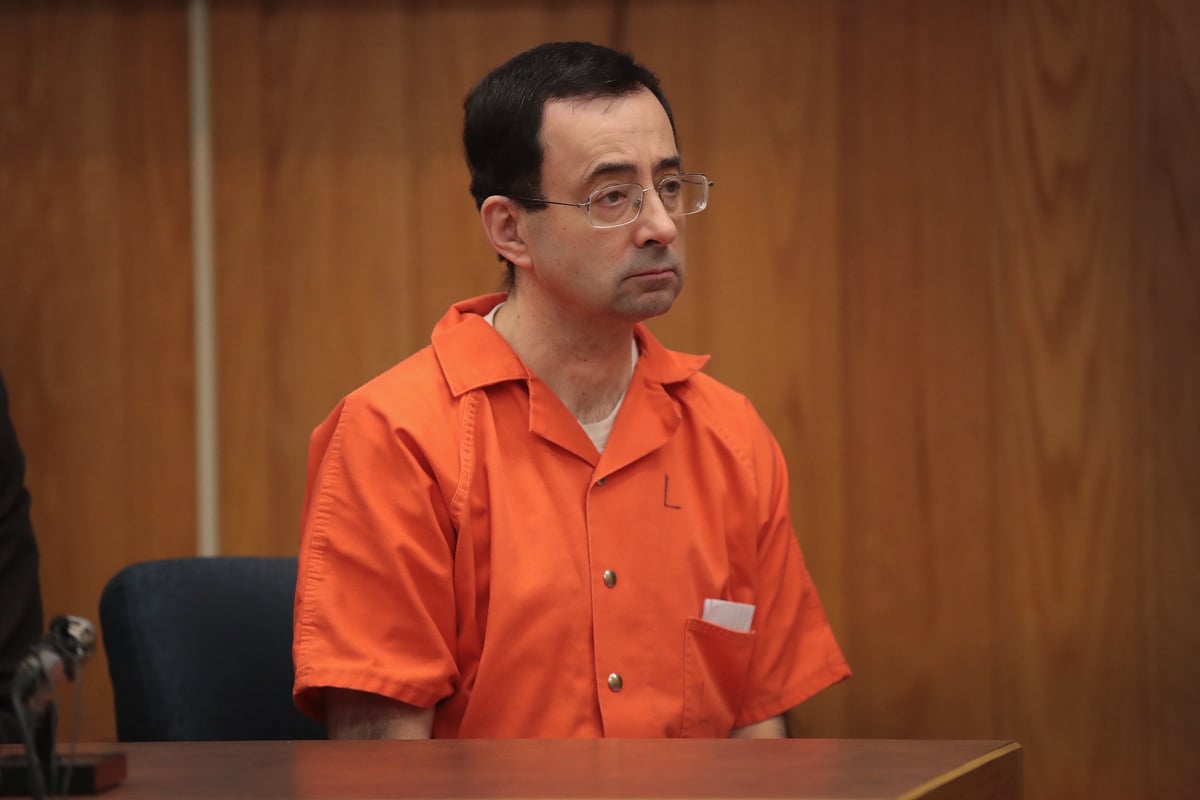 In 2018, Larry Nassar was sentenced 175 years in prison for abusing women and girls. Image: Getty.

In January 2018, Biles shared her story of being sexually abused by Nassar.

“Most of you know me as a happy, giggly, and energetic girl,” she wrote in a statement on Twitter. “But lately I’ve felt a bit broken and the more I try to shut off the voice in my head the louder it screams.

“I am not afraid to tell my story anymore. I too am one of the many survivors that was sexually abused by Larry Nassar. Please believe me when I say it was a lot harder to first speak those words out loud than it is now to put them on paper. There are many reasons that I have been reluctant to share my story, but I know now it is not my fault.”

"It is not normal to receive any type of treatment from a trusted team physician and refer to it horrifyingly as the 'special' treatment," Biles continued. "This behaviour is completely unacceptable, disgusting, and abusive, especially coming from someone whom I was TOLD to trust."

Indeed, Biles has endured and overcome great adversity to become the best gymnast the world has even seen.

Just recently, before heading to the Olympics, she had four words tattooed to her collarbone to acknowledge her strength and resilience.

Reply
Upvote
1 upvotes
Serena Williams, Tom Brady & Tiger Woods don't even come close. She is literally rewriting the rule book of gymnastics- no one ever would have predicted that a 4 ft 10 black girl could become an unparalleled champion. I cant think of any other athlete who has conquered their sport on the world stage  & is now inventing new moves and rules, not least by the age of 24.
S
snorks 10 months ago