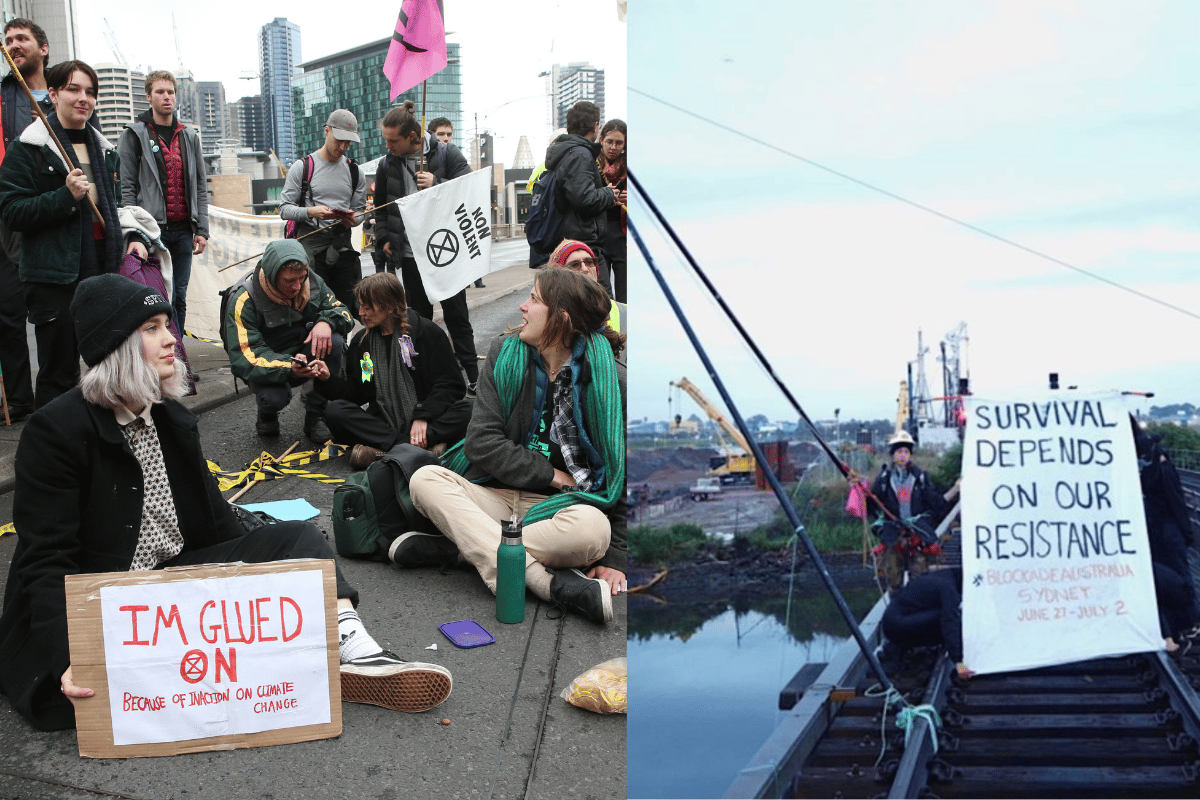 For several years now, there has been a rise in the number of citizens protesting for greater action on climate change. We've seen these protests across the world and throughout Australia.

But as of recently, some of these protests have been garnering more criticism and controversy than support.

The backlash has been so incredibly swift, that consequences for some climate change activists are becoming harsher for those who disrupt roads, government work, infrastructure or public transport. And in Australia, NSW is leading the push by enacting new legislation this week that includes fines of up to $22,000 and a penalty of up to two years in jail.

And although there's no denying that some of these protestors have caused significant disruption and risked their own lives in the name of climate activism, it has left a sour taste in the mouths of some who view the laws as "deeply anti-democratic".

Firstly, what exactly does a "disruptive" protestor mean?

At the heart of Australia's democracy is the right to freedom of assembly and association. What this means is that Aussies have the right to meet/assemble and engage in peaceful protest.

Examples of peaceful and lawful protest include authorised protests, many of which often have an organised permit to peacefully protest and provide notice to the government, in order to avoid potential legal ramifications.

But when we hear stories of people gluing themselves to roads, others staging sit-in protests in busy CBD streets, and some stopping freight trains by sitting on them and refusing to get down - these are considered "disruptive". And it's people who engage in these sorts of protests, that might find themselves at risk of facing serious penalties. 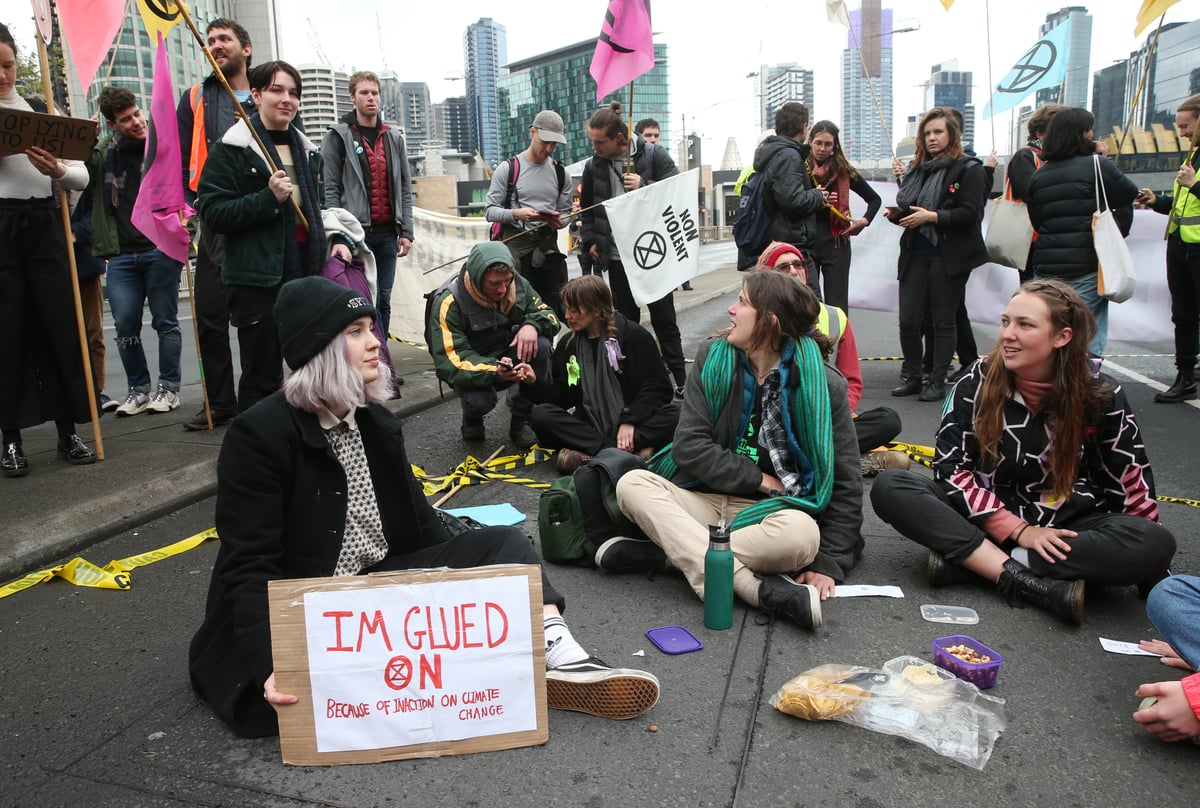 Extinction Rebellion protests in Melbourne. Image: AAP. In the last month, Blockade Australia has been causing controversy, a group that labels itself as "resisting Australia's climate destruction with organised disruption".

They have disrupted traffic across Sydney in particular, with protestors targeting freight trains, rail bridges and cranes. The response from NSW police has been swift, with at least four people arrested and two protestors facing deportation.

In Melbourne, protesters were arrested after climbing aboard a fuel tanker in inner Melbourne, as part of an Extinction Rebellion demonstration.

Listen to this discussion of the climate emergency on Mamamia Out Loud. Post continues after audio.

And who could forget the impact on Brisbane's CBD in 2019 and 2020, when Extinction Rebellion hosted multiple unsanctioned climate protests, resulting in over 56 people being arrested.

As for the fate of one of these climate change activists, Max Curmi - who climbed a crane in Port Botany last week - was sentenced to four months in prison. And late last year Eric Herbert was sentenced to 12 months imprisonment with a non-parole period of six months after he climbed atop a train in a bid to obstruct the coal industry.

It comes as the NSW government introduced harsher penalties for those engaging in similar acts of protest like these, under the Roads Act and the Crime Act. As noted previously, offenders will now face $22,000 fines and two years imprisonment.

The new legislation has been welcomed by both the state government and NSW opposition leader Chris Minns.

In a statement, Transport Minister David Elliot said: "We want to see the maximum sentences handed down because this economy cannot continue to have this sort of disruption as we come out of COVID. My message to the protesters is 'stop being dopes', you are really doing yourself a disservice."

He concluded: "I don't think anybody is taking notice about what they are protesting about."

But in reality, these climate protestors, "dopes" or activists - however you look at them - are being talked about and noticed. And it does raise an important conversation.

One Extinction Rebellion protestor explained to Mamamia why she decided to align herself with the group.

"I realised that my individual consumer choices were not enough, because we need systemic change, and we need it now. I realised that no one is going to ride in on a white horse. So, I joined XR," she said.

And most of Australia appears to be in collective agreement that more needs to be done on the issue of climate change, especially given the latest floods across the eastern part of the country.

But is there a right versus a wrong way to protest? And as the Greens party has labelled the NSW legislation, is it in any way, shape or form "deeply anti-democratic"?

It appears the answer to those two questions lies with the law and individual opinion.

But as former Assistant Commissioner to the NSW Police force, Mick Willing said in 2019, there is respect for the right of groups to protest but "we have a responsibility to the community and local businesses to ensure they can go about their normal activities without being impacted on or put at risk".

Reply
Upvote
These laws definitely feel gross. Obviously we don't want people interrupting traffic every day, but they're doing it because it's been 15  years of inaction and things are completely desperate.

I really don't think any of us want to end up in the sort of situation the Russian people are in now, where the government does something reprehensible but they cant protest it.
S
snorks 2 months ago