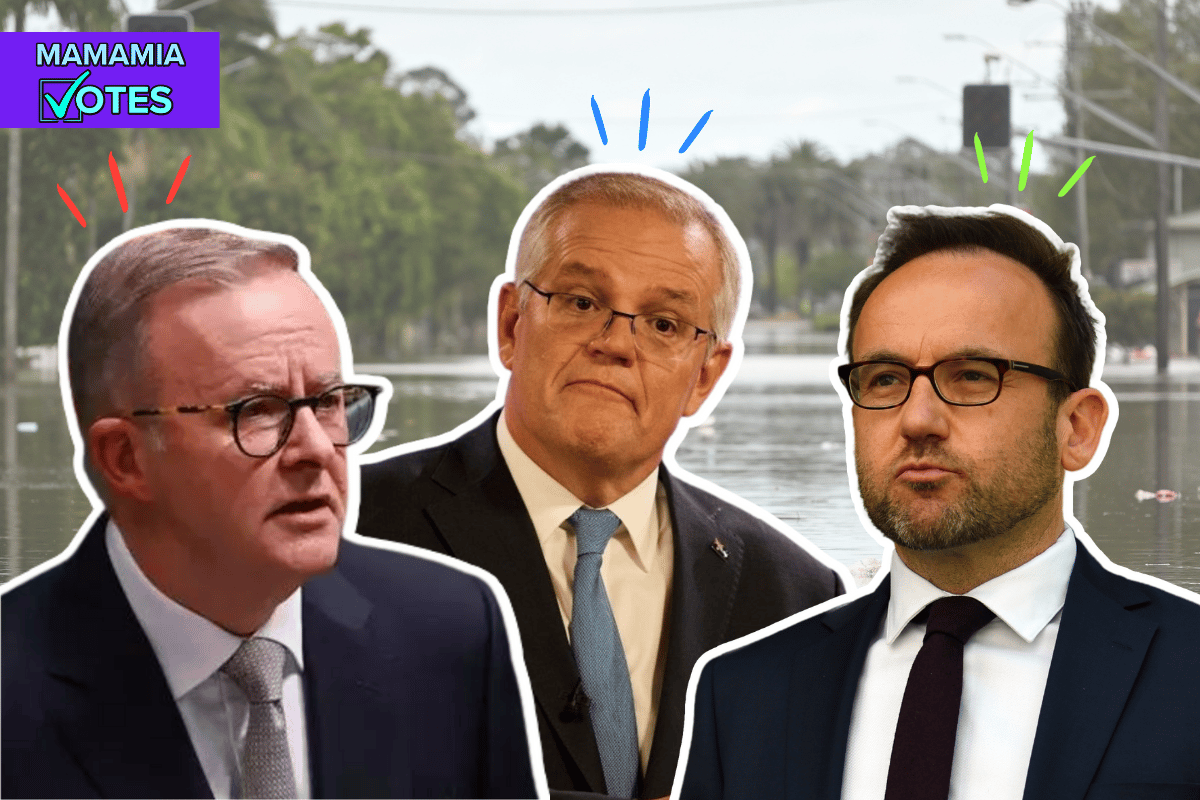 Climate change is the issue on a lot of Aussie's minds right now, following months of devastating floods and unprecedented rainfall along much of the east coast.

According to our recent Mamamia Votes survey, it's the number one issue deciding how most Australian women will vote in the upcoming federal election.

In fact, out of over 5,000 people surveyed, a whopping 68.7 percent said climate change will influence them at the polls.

Just last week, the Intergovernmental Panel of Climate Change (IPCC) warned that there are some governments around the world who have vested interest in keeping the fossil fuel industry alive and are holding back on transitioning to renewables, which they found to be the cheapest and most impactful way of cutting global emissions.

Australia was one of those governments called out for being heavily influenced by lobbying from fossil fuel industries.

So with the federal election around the corner, what is the government doing about climate change and where do the other parties stand?

Here's a quick rundown on the major parties' policies.

When it comes to protecting our environment, the Liberals say they are committed to reducing emissions through technology and investing in renewable energy, among other polices listed on their party's website.

However, Climate Councillor and leading economist Nicki Hutley calculated that just 0.3 percent of total government expenditure for 2021-2024 has been committed to climate change initiatives - and most of that was committed prior to this year's budget.

Here's a snapshot of what they're spruiking in the lead up to the election:

Opposition Leader Anthony Albanese has pledged to "end the climate wars" through a number of policies, including his Powering Australia plan to drive investment in cheap, renewable energy.

Here's what Labor are promising:

Listen to The Quicky's full episode on where each party stands on climate change. Post continues below.

The Greens acknowledge we are in a "climate emergency" and the crisis is caused by mining and burning coal and gas.

Their plan is to make "big corporations and billionaires pay their fair share of tax to clean up the mess they’re making, fund the transition to 100 per cent renewables and kick off a full-scale renewable export industry."

But will the Greens actually win the election? Well, the truth is, come May 21, either Labor or the Coalition will be victorious. That's just how Australian politics works.

So what the Greens are fighting for, is to hold a balance of power in the government which will allow them to have a greater say on what we do and don't do as a nation.

Here's what they're proposing:

This election we've seen a group of independents (most of whom are women might we add), taking on mostly Liberals in a number of seats, who are united under the Climate200 banner.

One of those women is Dr Sophie Scamps, a practicing GP in Sydney and an Independent candidate for the federal seat of Mackellar.

"Climate200 was created to try and help community backed independents like myself compete against the fossil fuel funded Liberal party," Scamps told The Quicky.

When it comes to cutting emissions, Climate 200, as a collective, states Australia needs to reduce emissions by 75 percent by 2030 to contribute our fair share to limiting global temperature rise to 1.5°C. However, various candidates within the fund have marginally different viewpoints within that.

Scamps said she stands with the Business Council of Australia, which is calling for a 46 to 50 percent cut in emissions by 2030.

"This is the minimum that we need [and] that the science tells us that we need to be able to create a livable future."

To find out which candidates attached to Climate 200 are in your electorate, search here.

R
rbk a month ago

Reply
Upvote
2 upvotes
A few things we can all do now - drive less, eat less meat, breed fewer children and take the zero (or close) energy plan with  your electricity provider
K
katp a month ago

let's get out of coal and gas in the time that science requires, but do it in a way that looks after those communities and make sure that workers move into new jobs without losing pay or security."

Excellent - but how? What kind of new jobs will work? What will remote communities then rely on without their FIFO people? What is the actual plan?
S
shauna020473 a month ago

Reply
Upvote
1 upvotes
@katp There are only about 17000 people employed in coal and gas in Australia- that’s not many. For comparison, there are about 450,000 nurses, and more than double that number (40,000)were made redundant from the tertiary education sector over 2 years since 2020. . Small numbers like that should be easily absorbed by stimulus support for small business, manufacturing, renewable energy development etc.
K
katp a month ago