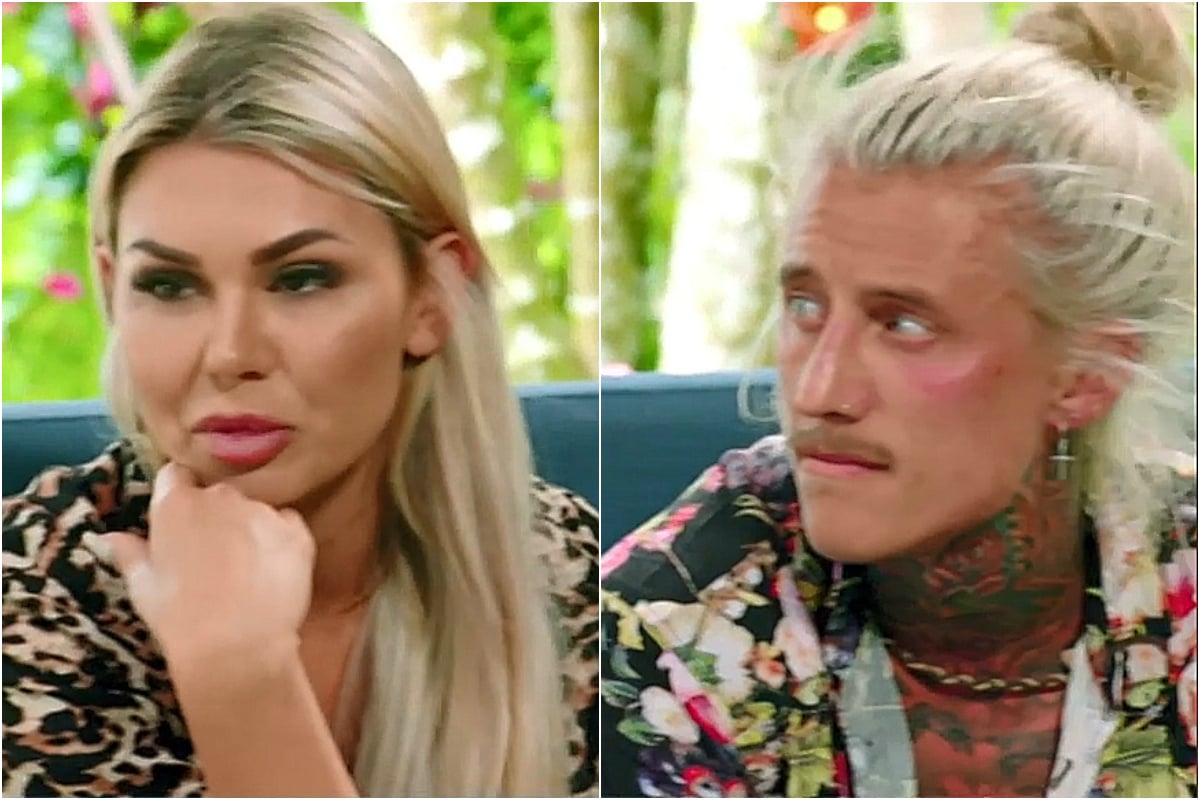 Palm trees aren't the only thing fluttering about in the Fijian breeze on Bachelor in Paradise.

There are also the flags.

You must have seen them?

They're big and red, and tend to wave furiously when Ciarran Stott and Kiki Morris talk about their relationship.

﻿Watch: Ciarran assured Kiki he won't be unfaithful. Only, he did it in a rather unsettling way.

These proverbial pennants were particularly obvious on Tuesday night's episode.

We presume we can trust Mr Van Aperen's conclusions because a) Osher said he trained with the FBI, and b) he was wearing a suit. In Fiji. In summer. Only a very serious professional would be prepared to endure that level of discomfort.﻿

After interviewing Kiki and Ciarran (who go by the couple name... Kiki), he arrived at the following conclusion: "I don't think there's a future. I think it will run its course and I think it will fizz out like fireworks."

Ok. Ok. Perhaps you don't consider minute eyebrow movements and shoulder shrugs to be actual evidence that their relationship isn't healthy and secure.

But there were plenty of other moments that seemed suspiciously red-flag-like.

Let's start with Ciarran's response to whether he is capable of having a monogamous relationship with Kiki.

The Melbourne man has been open about his history of infidelity, including the affair that ended his pre-Paradise relationship with fellow cast member, Renee Barrett.

So, Van Aperen wanted to know how can Kiki be assured he'll be faithful now.

His very earnest response, "Kiki is the kind of women that walks into a room, turns every guy's head and I come walking behind her going, 'I'm with her. Bollocks to you lot.'"

Gather around, boys and girls, and let's count the problems with that statement. One, two, three, four....

Then seconds later, Kiki confirms that Ciarran promised to wait for her in Paradise. That presumably means not sleep with other women until she arrived.﻿

Yet he did. He did exactly that with Jessica Brody. For the record; she was entirely unaware of his agreement at the time. An agreement, it's worth noting, that Ciarran made with Kiki just days after end of his long-term relationship with Renee.

According to the version of events Renee gave on Tuesday night's episode, she and Ciarran broke up a week before he left for Paradise (casting seems suspiciously last-minute on this show, but that's a subject for another day), and he and Kiki went on their date just "two or three" days later.

All these add up to the biggest, reddest flag of all: Kiki's gut feeling.

Not only did Kiki declare that she's been left feeling embarrassed by revelations about Ciarran more than once since they've been together, but she conceded "there have been some doubts along the way."

With that many warnings, it's no wonder so many viewers are screaming, "Run for the hills, Kiki". But there are signs she may have already scaled them.

Ciarran disappeared from her social media in January, and later that month started openly flirting with US Bach star Demi Burnett on Instagram.

Since Bachelor in Paradise has gone to air, Kiki has also been throwing the odd knowing comment on posts from his various scorned exes.

Angie not a fan of Ciarran and Timm anymore then judging by these comments on my meme earlier 😂 Honestly tho seeing all the Bach girls past and present come together lately is so nice. As is seeing so many of them call out other co-stars for their cruel comments, double standards and general dicky behaviour. Most of the relationships on this show may be fckd but at least there's some solid friendships coming thru hey

No doubt they're hoping that the next flag Ciarran raises is a white one.