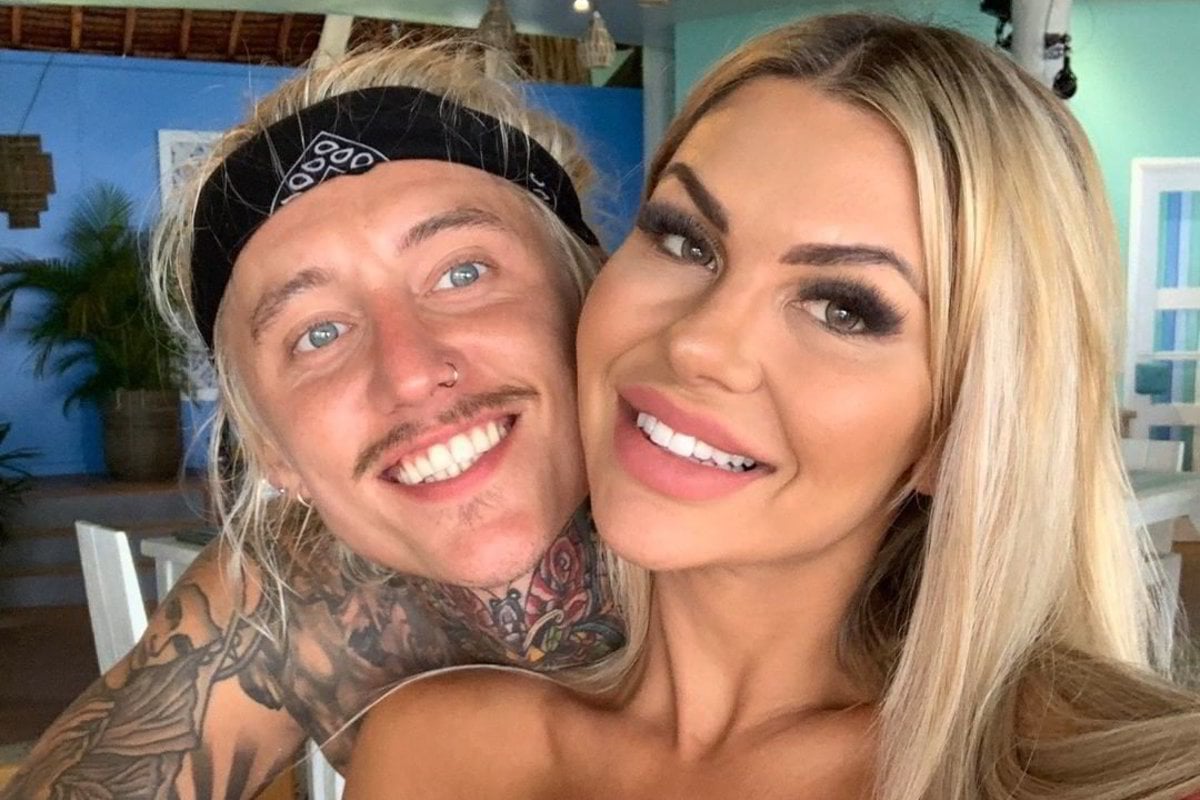 In news that surprised nobody, last night it was confirmed Ciarran Stott and Kiki Morris' relationship did not last following their exit from Bachelor in Paradise.

Ciarran and Kiki left the series before the commitment ceremony and as the message on screen said "within weeks, he ended the relationship" and "she had not heard from him since".

There's a 'bombshell' coming on Bachelor in Paradise. Post continues below video.

As it turns out, that was leaving out a lot of information but in an interview with So Dramatic podcast host Megan Pustetto, Kiki shared, in her own words, "hot, hot tea".

Before Bachelor in Paradise.

As we found out when Kiki arrived on the show, Ciarran and Kiki had uh, 'hung out', prior to Paradise and knew that each other would be in Fiji.

Our investigation tracked down a Daily Mail article, that shows Ciarran and a 'mystery blonde' who looks very much like Kiki, kissing in a Sydney bar on November 2.

As it turned out, this was the weekend before Ciarran flew to Fiji. Kiki told Pustetto Ciarran went from her house to the airport, and sent her a sweet message about how excited he was to see her when she also arrived.

"He sent me this big, long-winded romantic text as he was getting to the airport, before they take our phones off us, like 'I've had a great weekend, I knew you and I were going to hit it off, I can't wait for you to get to Paradise, it's going to be you and me babe,'" she said.

And it gets juicier: Kiki said Ciarran had been messaging her about a month earlier, during the weekend he was at a mate's wedding... The same wedding he cheated on Renee at.

"He also told me he hadn't had a girlfriend or been with anyone since the end of Bachelorette," she said.

Renee told TV Week she broke up with him after discovering he had cheated on her at a wedding. This all went down about four weeks before Paradise began filming, she said, so right around the time Ciarran's dramatic exit from Bachelorette aired and paparazzi began following his every move, snapping him with other women - including Kiki - in Sydney.

Renee told Pustetto Ciarran had also told her they could have got back together in Fiji.

During Bachelor in Paradise.

As we know, Ciarran hooked up with Abbie Chatfield and Jessica Brody before Kiki arrived in Paradise.

Kiki told Pustetto she first realised he'd slept with other women when they planned to spend the night together and producers said he'd already given consent, but he told her it was just drunken kisses.

That's why we watched Kiki being so angry when Ciarran admitted he'd slept with Jess: Because she'd given him the opportunity to be honest and he didn't take it.

After Bachelor in Paradise.

What a roller coaster! I never expected Paradise to be easy but wow give this girl a break. Of the many bumps in the short road I had in Paradise I still believed everyone deserves the chance to learn from their mistakes and Ciarran and I left Paradise 100% committed to give our relationship a go in the outside world. We had an instant spark that grew into a real and deep connection. Following Paradise, Ciarran moved to Sydney and for the most part of those 2 months things were really positive. It’s unfortunate our relationship didn’t work out the way we wanted, and we are no longer together. I wish him nothing but the best, and hope that he’s grown from this experience like I have. Always look forward and never look back! Thank you for the amazing outpouring of love and respect I received from the other cast, the crew and all of Australia. No Regrets (no, really) The experience was definitely worth it as I have a new understanding of myself and the real love story here is how proud I am of who I have become! Also special mention to @maryanne.morris for her cameo in “Mary-Anne VS Ciarran” it was truly the ultimate battle! Love you all ❤️KEEKS XX

This is where it gets JUICY.

Kiki said Ciarran moved from Darwin into her apartment in Sydney just days after they arrived back in Australia, and they'd quickly begun to make big plans including starting a fashion business, getting a dog and moving into a bigger apartment together.

In December 2019, just weeks after filming ended, the Daily Mail obtained photos of Ciarran walking out of Kiki's Sydney home to receive their UberEats... in nothing but a towel.

A week later, they were seen holding hands at a birthday celebration for Ciarran's Bachelorette mate Jackson Garlick, during which Ciarran got Kiki's lips and name tattooed on his wrist (which he has since had covered up, obviously).

Kiki told the podcast everything was going well with Ciarran "until it wasn't".

"He met my whole family, we spent Christmas together, and he was living with me from the very day we left Fiji. He went to Darwin, packed up the remainder of his stuff, put his car on a truck, shipped it to Sydney and moved into my house," she said.

As seen on Timm Hanly's Instagram stories, Ciarran and Kiki travelled up the coast after Christmas and stayed in Timm's parents' motel, which is where Timm captured the below photo of Ciarran and Kiki lounging by the pool: 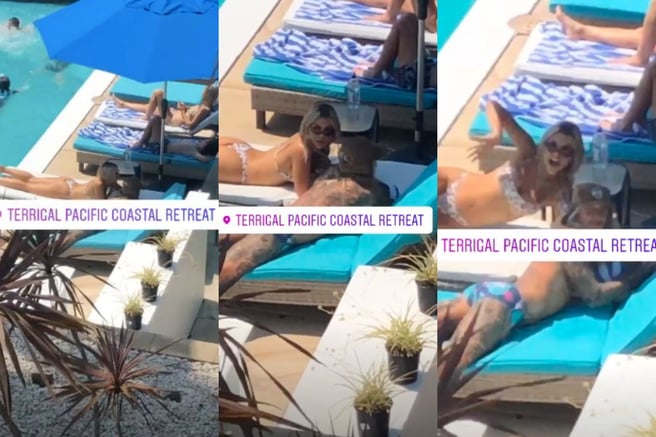 They looked close, and Kiki said they were going well until New Year's Eve and New Year's Day 2020.

"Everything was great, until it wasn't, then it was terrible," Kiki explained.

She said they attended a New Year's party at Jackson's house and everything was great until something happened that reminded her of what she was warned about by the women in Paradise.

"When he was first talking to me on Instagram, he was also talking to Tenille from Bachelor in Paradise season two... Whilst the party was happening we were all having a good time and the doorbell rings at Jackson's house, it was 2am and Tenille's there."

Two days later, Kiki asked how Tenille knew to arrive at Jackson's, and Ciarran said he'd told her to come join the party.

"It turned into this huge argument – obviously we've seen what Ciarran's like when he gets backed into a corner... He just went ballistic in my house, 'I'm effing leaving, I'm effing going, if you don't trust me, you're never going to trust me, why would I stay here?'" she said.

She said they went to Townsville together, but it was it like being on holiday with a "stranger".

After they returned to Sydney, Kiki said "If you're going to continue to treat me like this, I feel like I'm a stranger in my own home, walking on eggshells around you, I think you should leave".

Kiki went to the gym and when she got back all of his stuff was packed and he then drove straight to Melbourne.

"He used his fake tears, that 'I'm so sorry, you deserve better' bulls**t...'I need to work on myself, I can't give you everything you deserve, there's something wrong with me.'"

She said after that day in January, she "never heard from him again" and she almost found herself homeless.

"Within a week all these dreams we had basically fell to pieces.

"He basically left me homeless because I'd put my notice in for my apartment. My housemate had already moved out, the place we were looking to move into I couldn't afford on my own, and he just up and left," she said.

After a couple of days in "breakdown mode", Kiki found a place to rent one day before she needed to move out.

She said her time alone had been the best thing for her, as she could reflect on the decisions she'd made and how quickly she'd rushed into a relationship with Ciarran.

"I shouldn't have to find a silver lining in the situation, I should never have been in that situation in the first place, but I did triumph over it and I'm in a great place now."

By mid-January, Ciarran was flirting up a storm with US Bach star Demi Burnett on Instagram and, according to Kiki, on a "f*** fest" in Melbourne, so it was well and truly over between them. For good.

In another twist, Kiki and Renee seem to have bonded a lot over their shared... dealings with Ciarran and are now very close friends.

Yikes. We guess Ciarran's fears about going from Australia's favourite Bachelorette contestant to Australia's most hated villain weren't unfounded after all.

This article was originally published on July 27 and has been updated.