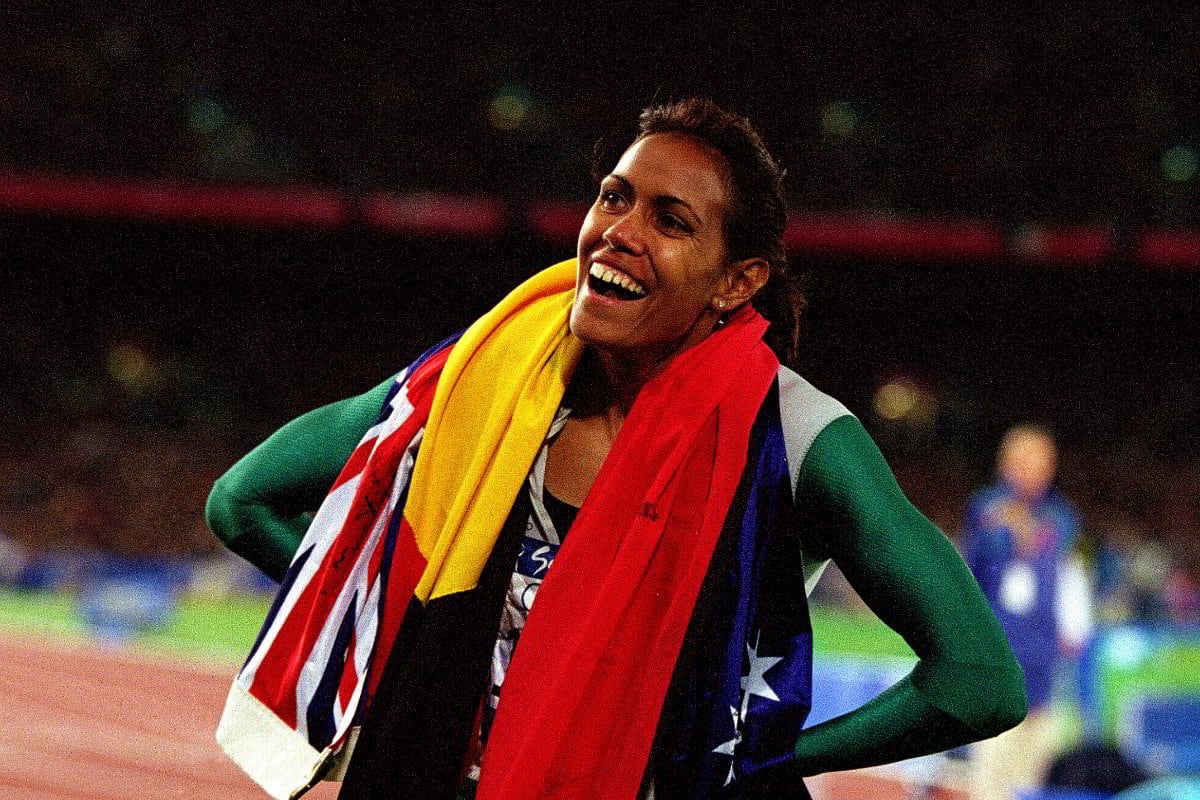 We, along with the billions who tuned in from around the world, watched as one of our greatest-ever athletes, clad in a head-to-toe body suit, strode across the 400m finish line, metres ahead of her competitors.

After a buildup unlike any in our sporting history, Cathy Freeman had won gold at a home Olympics.

With her shoulders free of the weight of expectation, Freeman wrapped them in two symbols of pride: the national flag of Australia and the Aboriginal flag, gently twisted together.

But that victory-lap act put it all at risk. Carrying the flag of her people was in breach of International Olympic Committee Rules.

Freeman knew. According to media reports, she'd even been warned against it. But she did it anyway.

The morning of her 400m final at the 1994 Commonwealth Games in Victoria, Canada, Cathy Freeman pulled a carefully folded Aboriginal flag from her kit bag and handed it to her coach.

She wanted it waiting at the finish line, just in case.

Freeman wanted to carry her people and her culture with her through each success. As a child, she'd been made to feel embarrassed to be Aboriginal and, at around the age of 10, wasn't given a first-place trophy she'd won, "apparently because I was Black".

That day in Canada, Freeman claimed her trophy; her first individual Commonwealth gold medal in a games-record time of 50.38sec.

Beaming, she jogged around the track, the flags of both her country and her people held proudly over her head.

"I wanted to shout, 'Look at me. Look at my skin. I'm black, and I'm the best.' There was no more shame,'" Freeman said in her biography, Cathy: Her Own Story. 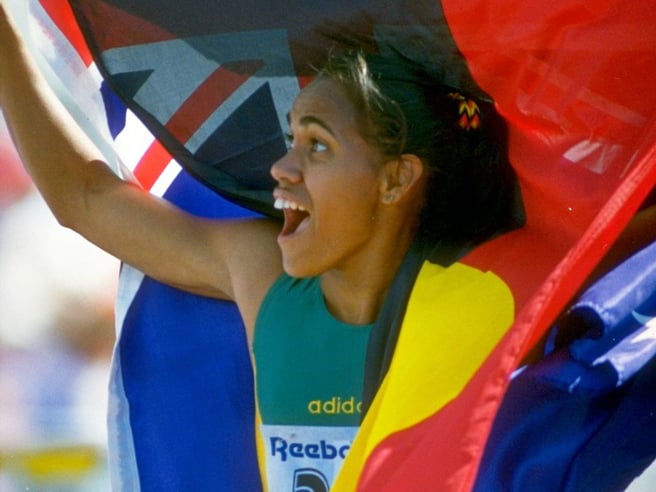 By the following morning, a debate had swelled back home in Australia, after Australia's Chef de Mission for the games, Arthur Tunstall, issued a statement publicly reprimanding the star athlete over her use of the Aboriginal flag.

"She should have carried the Australian flag first up, and [we should have] not seen the Aboriginal flag at all," he told media.

Quietly defiant, Freeman tied the two together and paraded them once again after her historic victory in the 200m just days later.

As explored in a new documentary, Freeman, which airs on the ABC tonight (Sunday, September 13), the Aboriginal flag represented pride to the sprinter, but also the struggles and hardships of her ancestors.

People like her grandmother who was a member of the Stolen Generations.

People like her great-grandfather, George Sibley, who refused to hand control of his wages over to police, and so was banished to the Palm Island penal settlement along with his wife and their five children.

"When I think about all the injustices and innocent people whose lives were changed forever, it makes me really sad," she tells the filmmakers. "But it also makes me determined."

"The most inspiring part."

The groundswell of support for Freeman's decision is credited with encouraging the government to recognise the Aboriginal flag as an official flag of Australia in 1995.

Prime Minister Paul Keating went a step further, stating at the time, "the Games revealed the overall sentiment of Australians is for the reconciliation of Aboriginal and non-Aboriginal Australians".

That was truly on show just months before the 2000 Sydney Olympics, when more than 250,000 Australians marched across the Sydney Harbour Bridge to call for reconciliation. It remains the largest political demonstration in the history of this country.

The Olympics themselves celebrated Aboriginal and Torres Strait Islander culture throughout, showing the rich history to the world.

Yet under the International Olympic Committee's rules no Indigenous athletes are allowed to hold the flag aloft.

Any athlete who carries or wears a flag other than their national flag risks falling foul of Rule 50 of the Olympic Charter, which sates, "No kind of demonstration or political, religious or racial propaganda is permitted in any Olympic sites, venues or other areas."

Breaches are considered on a case-by-case basis and risk disciplinary action, including disqualification.

Cathy Freeman did it anyway. It proved to be a worthwhile risk.

"To be a Kuku Yalanji woman, to have a place in the history of this country, surely in sporting context but in a social justice context — matters that are so important for the future of this country," she said, "that's the most inspiring part for me".

The fight to change Rule 50 continues.