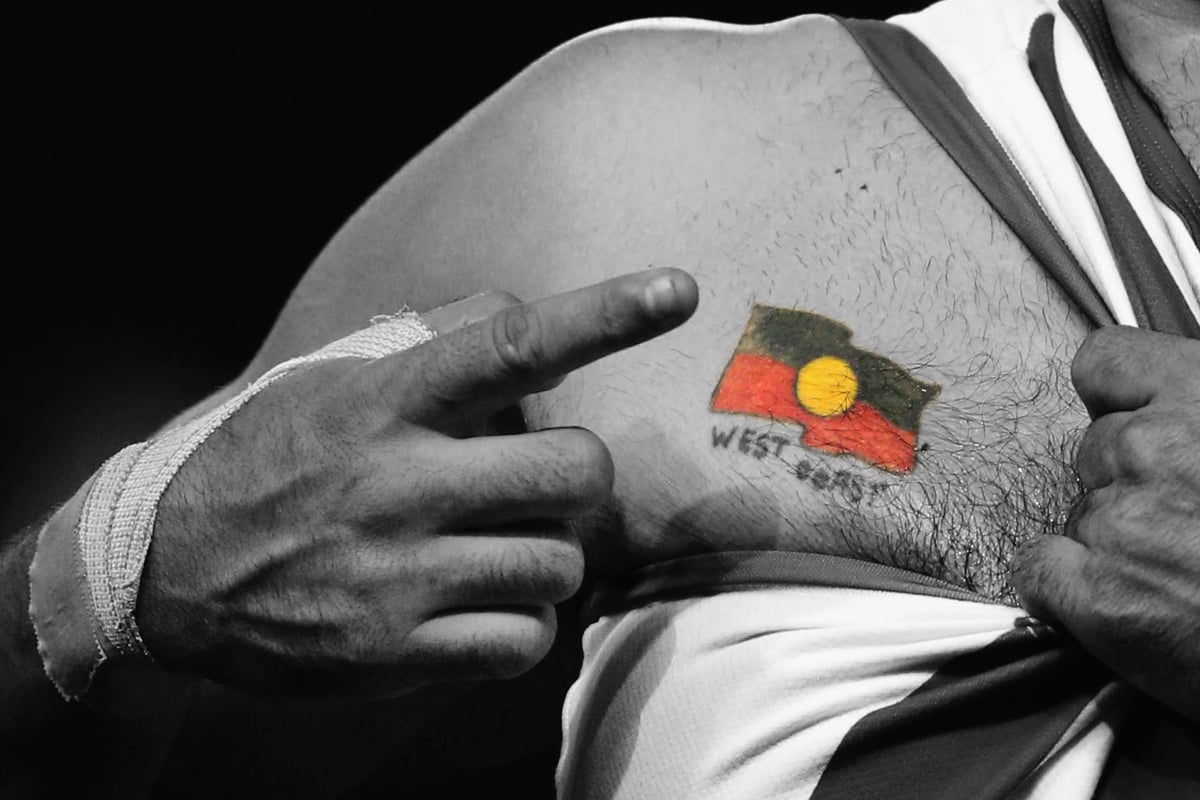 This weekend, the AFL will stage its annual Sir Doug Nicholls Round, named in honour of the Yorta Yorta man who remains one of the game's most legendary athletes.

The round celebrates Indigenous players and culture, yet there won't be an Aboriginal flag taking pride of place in the centre of the oval, nor will there be any emblazoned on the players' specially designed jerseys.

Because the league hasn't paid a copyright fee.

Watch: Amanda Fotheringham on the awkward questions she gets asked as an Aboriginal woman.

The man behind the Aboriginal flag.

The Aboriginal flag was designed in 1971 by Harold Thomas, an artist and Luritja man from the Northern Territory.

It's an image steeped in symbolism: black on the top to represent First Nations people; red on the bottom, to represent the earth; and a yellow circle for the sun, the giver of life.

The design was first flown for National Aboriginal Day in Adelaide in 1971. But it gained national visibility the following year when it was used at the Aboriginal Tent Embassy, a permanent Indigenous rights protest site established outside Parliament House in Canberra.

More than two decades later, on July 14, 1995, the Governor-General issued a proclamation that declared the design to be the official flag of the Aboriginal people of Australia.

Following the declaration, several artists came forward claiming to be responsible for the design. But in 1997, the Federal Court of Australia ruled that Harold Thomas was its true author and copyright owner.

As Isabella Alexander, Professor of Law at the University of Technology Sydney, explained via The Conversation, "Under Australian law, his copyright will last for 70 years after his death, and can be claimed by his heirs or anyone else to whom he might choose to assign it. Thomas can assert his rights against anyone making any copy of the flag, even if they are not selling it or using it commercially – this could even include bringing an action against someone with a tattoo of the flag."

Wait, so someone owns the Aboriginal flag?

Yes. It's believed to be the only official flag of any country to be copyrighted.

And it only gets more contentious from there.

In the years since the 1997 court ruling, Harold Thomas has struck worldwide licensing agreements with three companies — WAM Clothing, Gifts Mate and Flagworld — giving them exclusive rights to use the design.

There are exceptions. Thomas has allowed non-commercial operations that assist Aboriginal people (think health, education and legal services) free use of the design.

But any other organisations that produce it risk legal action.

The AFL and NRL, for example, last year received 'cease and desist' notices from WAM Clothing after they each used the flag design on their respective Indigenous Round jerseys.

The brand also infamously went after Clothing the Gap, a small Indigenous-owned fashion label that puts profits into health-promotion activities in Aboriginal communities. The Victorian-based business received legal letters demanding they stop printing the flag on their merchandise.

What is the #freetheflag campaign? 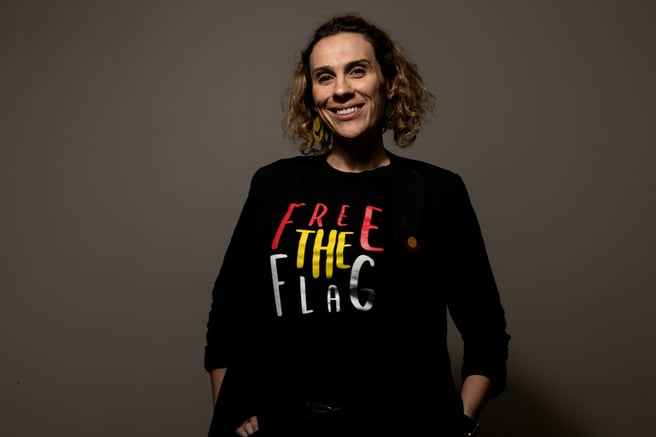 The Free The Flag campaign was launched by Clothing the Gap in 2019 to call for viable channels for new licensing agreements over the flag's design, particularly for Aboriginal business and organisations.

"This is not a question of who owns copyright of the Flag. This is a question of control," the company states. "Should WAM Clothing, a non-indigenous business, hold the monopoly in a market to profit off Aboriginal peoples' identity and love for 'their' flag?

"We believe that this control of the market by a non-indigenous business has to stop."﻿﻿

As well as attracting more than 100,000 signatures on a Change.org petition, Clothing the Gap's #freetheflag and #pridenotprofit campaign has found high-profile allies, including former Olympian and federal senator Nova Peris.

Now, members of the AFL community are also supporting the cause after the league made the decision, in consultation with its Aboriginal Advisory Council, not to enter a commercial arrangement with Thomas and the licencee companies ahead of the 2020 Sir Doug Nicholls Round.

Speaking to the Herald Sun, Indigenous man and Essendon legend Michael Long called on spectators going to matches to bring an Aboriginal flag in the spirit of the round.﻿

"It is a disgrace," he said of the copyright tousle. "That flag belongs to all Aboriginal people – not just to any individual."

"At a time when the Black Lives Matter movement has reached a fever pitch and many Indigenous footballers have been targeted with online racial attacks, the Aboriginal flag's absence from Sir Doug Nicholls Round will be a glaring omission," he wrote for the ABC.

"For Aboriginal people, the flag means everything. It is more than a flag — it is a symbol of pride, love and identity."

One that comes at a price.

Reply
Upvote
This is so easily fixed- the government should have paid for the copyright decades ago, but they can make up for it now. It would be the cheapest and easiest thing they ever did for Indigenous Australians, it’s baffling it’s taking so long.
G
grumpier monster 2 years ago

Reply
Upvote
Our indigenous Australians no longer have a flag.The art-work by Harold Thomas that was previously used as the flag is no longer the flag. It is a piece of copyrighted art. We must swallow our  disappointment and put out the call for a new flag that is free for all to use in much the same way the Australian flag is. It is a bitter pill. Everyone recognised the art-work as the Aboriginal flag. It was beautiful and fitting. I have confidence that another one will be created. I no longer wish to identify Thomas' art as the indigenous flag.
News
General
Opinion
True Crime
Politics
Sport
Explainer
Entertainment
Celebrity
Reality TV
Movies
TV
Books
Rogue
Royal
Lifestyle
Beauty
Fashion
Weddings
Home
Wellness
Health
Fitness
Travel
Food
Parents
Before The Bump
Pregnancy
Baby
Kids
Teens
School
Parent Opinion
Work & Money
Money
Finance
Career
Lady Startup
Relationships
Sex
Dating
Separation
Friendship
Family
Real Life
Couples