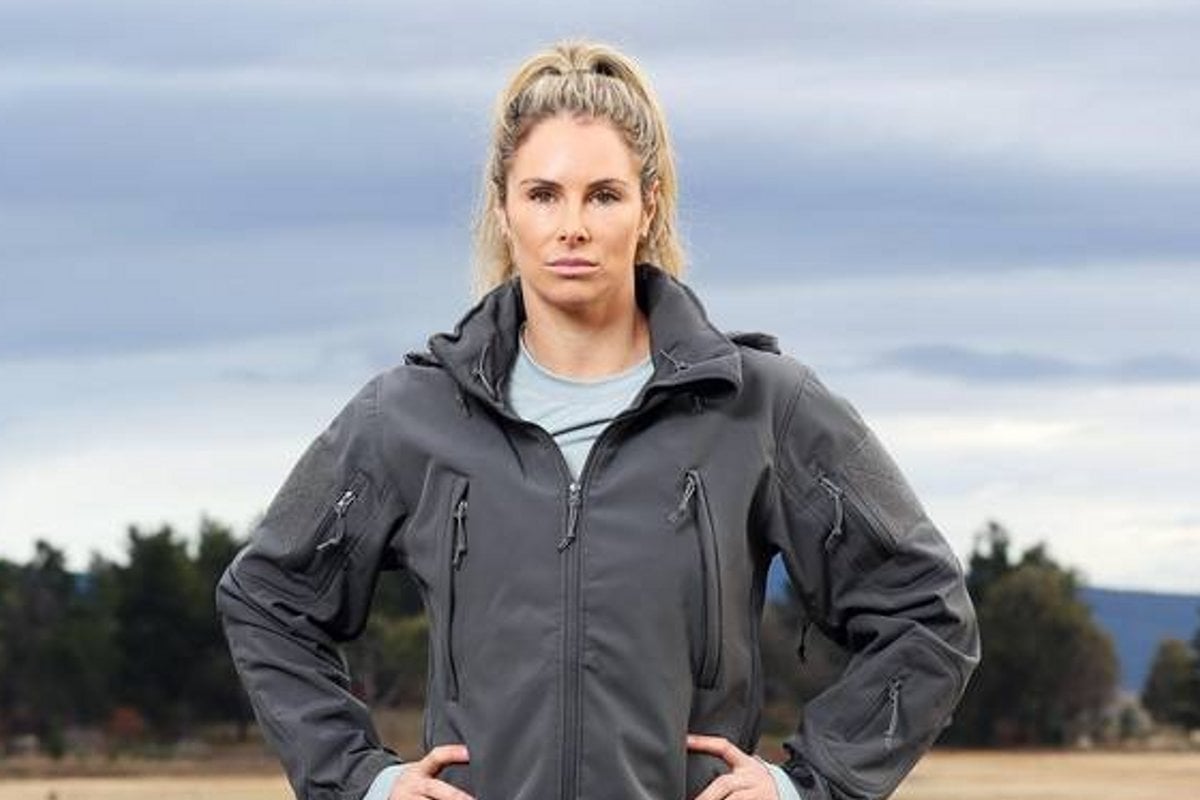 The following deals with pregnancy loss, which may be triggering for some readers.

Watching Candice Warner fall backwards out of a helicopter, walk face-first down a cliff face and crash-tackle a former Miss Universe over a car tyre, you have to remind yourself... she signed up for this.

The former Ironwoman is among 17 contestants on the inaugural season of SAS Australia, a Channel Seven reality show that puts celebrities through a series of physical and psychological tests that mimic the Special Forces recruitment process.

Watch: Why Candice Warner is putting herself through SAS Australia.

Candice, who is the wife of Australian cricketer David Warner, has already faced several major challenges over the past few years, from relentless trolling to the fallout of her husband's ball-tampering scandal. Each time the eyes of the country have been on her.

So why choose to face another?

This is the path that led Candice Warner to the door of that helicopter.

Candice Warner (nee Falzon) was just 14 years old when she competed in her first professional Ironman. She went on to earn a place in the gruelling Nutri-Grain Ironman & Ironwoman Series in 2008.

Through her success, Candice became somewhat of an 'it girl' in Sydney; a staple of both the social and sports pages.

But in 2007, the athlete and professional surf lifesaver was subjected to brutal trolling after media reported that she'd had a drunken encounter with footballer Sonny Bill Williams in a pub toilet cubicle.

On Monday, viewers will watch Candice relive this point in her life during an interrogation on SAS Australia.

"In my early 20s I made a very big mistake," Candice said.

"I put myself in a situation where I shouldn't have and because of that I brought embarrassment (and) shame to my family."

Sport helped her through the onslaught.

"I try to turn everything in my life into a positive. Some of the things people said or wrote about me did hurt, but I use that as motivation. I thank them," she later told The Daily Telegraph.

Candice met cricketer David Warner after reaching out to him on Twitter while he was playing the Ashes in England in 2013. They messaged back and forth, began video chatting and once he returned to Australia, struck up somewhat of a whirlwind romance.

Their first child, Ivy Mae, was born in September 2014, and the parents married seven months later in the NSW town of Nowra. Their second daughter, Indie Rae, arrived in 2016.

My Husband, My everything. @davidwarner31 💗💏👪

The were one of Australia's sporting golden couples.

Then, in 2018, David Warner made a decision that turned millions against him.

He and then-Australian captain Steve Smith orchestrated a plan that saw rookie Cameron Bancroft covertly rough the ball with sandpaper during a test match against South Africa in Cape Town.

Earlier in the tournament, Candice had been rocked by the sight of South African fans tormenting her husband by wearing Sonny Bill Williams masks. Then came this second blow.

"I was feeling so happy that day," Candice later told the Australian Women's Weekly. "I hoped the terrible stuff was behind us... I was beginning to feel that first stage of being pregnant – the subtle changes to my body were kicking in. We were overwhelmed, knowing another little Warner was on the way.

"I was getting [her daughters] ready to go to the afternoon session and out of the corner of my eye, on the screen, I could see something going on. That was the first I knew of the ball tampering."

The fallout was intense. The trio was banished from the tournment, and packed onto flights home. Candice and David arrived back in Australia to a horde of waiting media, shouting and flashes cameras in their faces.

There was criticism that the couple had taken their daughters through the scrum, with some critics accusing them of 'hiding behind' their children. But Candice later said they'd been told they would be ushered through a private exit: "I don't do fragile but I was in a bad state... I was completely gutted when I saw the media."

Warner fronted a press conference a short time after, offering a tearful apology. 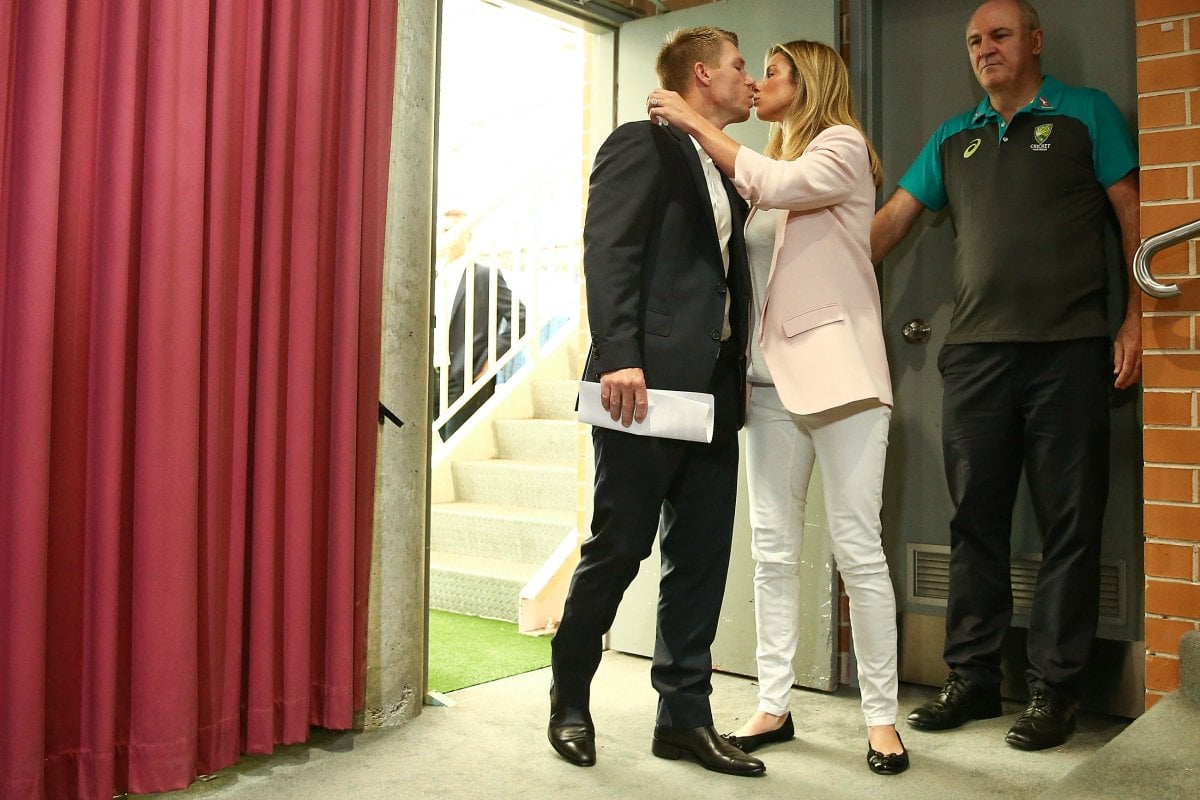 Candice embraces David before he fronts a press conference over the ball-tampering scandal. Image: Getty.

A week later, Candice experienced pregnancy loss. She endured yet another with a subsequent pregnancy just three months later.

"Looking back, it was a very horrific time," she told Stellar.

"We had two miscarriages in that time. It definitely took a toll on my body. It was heartbreaking. I thought, 'What more can be taken from me?'"

A rainbow baby and reality TV.

In June 2019, Candice was able to hold a longed-for baby in her arms.

Welcome to the world our gorgeous Isla Rose Warner. Born June 30th at 10:30pm. Our little family is now complete. Ivy and Indi are so proud of their sister. @davidwarner31 Your support was and is amazing. Isla we love you. #blessed.

With their family in the shape they longed for and their most difficult period behind them, Candice has said she is determined to show people the strength that got her through it.

"People, they see me as David Warner's wife. And they forget that, before that, I was an Ironwoman, and I was quite capable of things," she told KIIS FM.

It's with them and her little girls in mind, that Candice stepped up for her latest challenge.

As she recently told podcast Powerful Stories, her key to survival is relatively simple: "Do the opposite of what people expect, don’t run and hide, and have the right mindset – still be positive."

If you or a loved one has experienced pregnancy loss, support is available. Please call SANDS Australia on 1300 072 637.