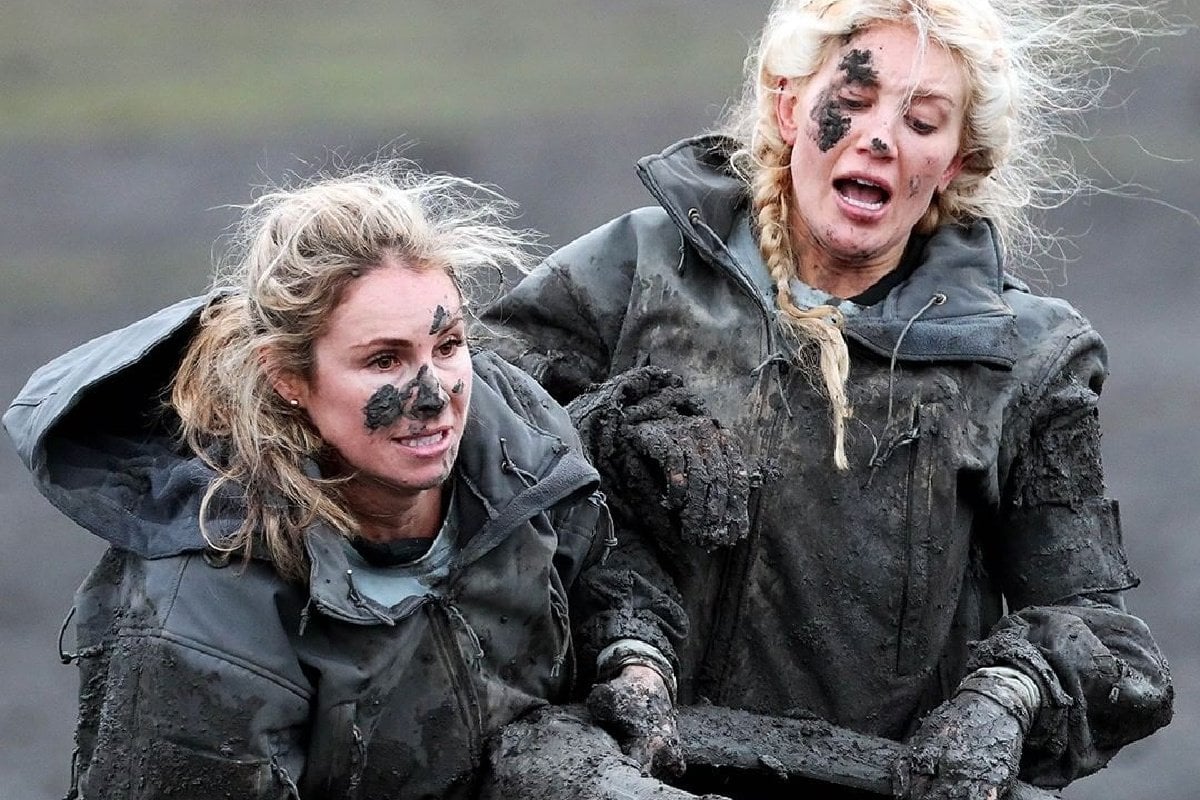 We've seen two episodes of Channel Seven's wild new reality TV show SAS Australia, but it is safe to say there have been no... comforts afforded to the celebrity cast.

They sleep on camp cots in one large room, shower in... something that cannot ever be considered an actual shower, and use this as a bathroom: 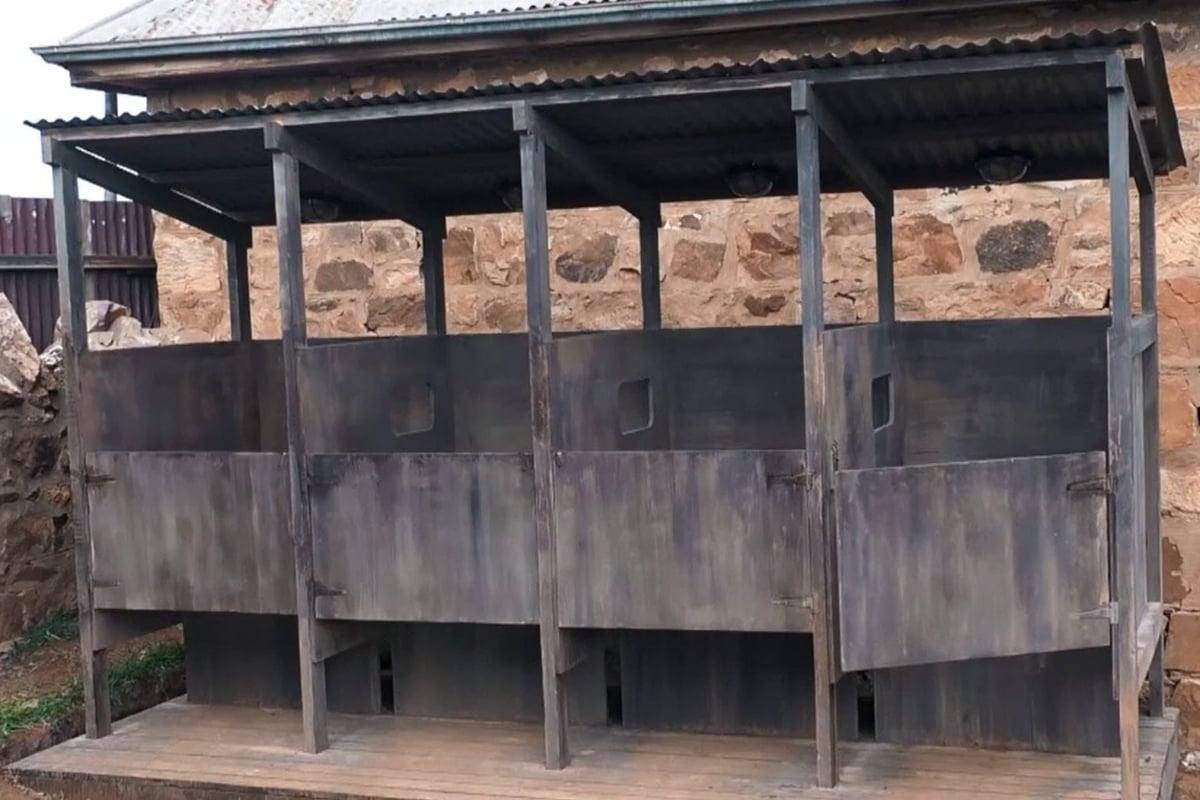 The show was initially filmed in Queenstown, New Zealand, in March, but was shut down prematurely due to the COVID-19 pandemic. It picked back up in July/August near Jindabyne in the NSW Snowy Mountains.

So that explains the shivering Honey Badger.

Was filming the show as grim as it looks on screen? Were there behind-the-scenes warm showers or... mattresses?

Here's what we know about filming the show.

Contestant Erin McNaught has shared just how tough the show really was.

Speaking to Who Magazine, the former Miss Australia explained that the physical tests were just as intense as they look on TV. And the contestants suffered as a result.

"I’m still recovering from my injuries," the 38-year-old said. "I passed out underwater, I got black eyes, tore muscles in my left shoulder and I lost something like 7kg."

"It was undoubtedly the hardest, most brutal and challenging thing I’ve ever done," she continued.

The model also explained that the SAS process was intense from day one.

"I almost broke on the very first day. I had to fall backwards out of a helicopter and I landed face first horizontally. I blacked out underwater, lost sight in my left eye for a while and had two black eyes for five days."

No, that’s not dirt. It’s bruising 😳 (The strip of unbruised flesh is where my sports bra was!) Apparently water is just as hard as concrete when your jump out of a helicopter goes wrong 🚁😂

What the contestants got paid.

Well, it looks like we know how much the contestants get paid to go through the hell that is SAS Australia.

According to the Daily Mail, the contestants' pay ranged from $30,000 to $50,000, depending on their level of fame and how much they demanded.

And it looks like one sought after celebrity earned much more than the others.

Reports also note that any contestant who left the show early (aka Roxy Jacenko after six hours) got a percentage of their final pay cut.

A backpack and physical pain.

"It didn't feel like we were being filmed because I was just trying to survive! I wasn't Ali, I was #16," the 34-year-old said.

"We didn't take anything in apart from the clothes we were wearing. We were issued a backpack with everything we needed. No hot water, no showers, no flushing toilets. Sleep and food deprived, riddled with adrenaline, fear and exhaustion."

Oetjen said the physical pain - cut hands, blistered feet, bruises, etc. - were no way near as bad as the freezing temperatures the cast found themselves in 24/7.

"Freezing temperatures ALL the time with no respite, being wet with the chill winds made it so much worse," she said.

Some of the contestants were consuming up to 4000 calories daily during their pre-show training, but that intake drastically dropped while filming.

There were three meals a day but they were rather... basic (to everyone except Jackson Warne, who had the magical experience of trying tomato soup for the first time), totalling as low as 1400 calories a day.

So, there was precisely no hot water anywhere in the camp.

To 'shower', the celebrities had to fill a bucket of cold water from a tap and carry it to a sink area where they could wash themselves. 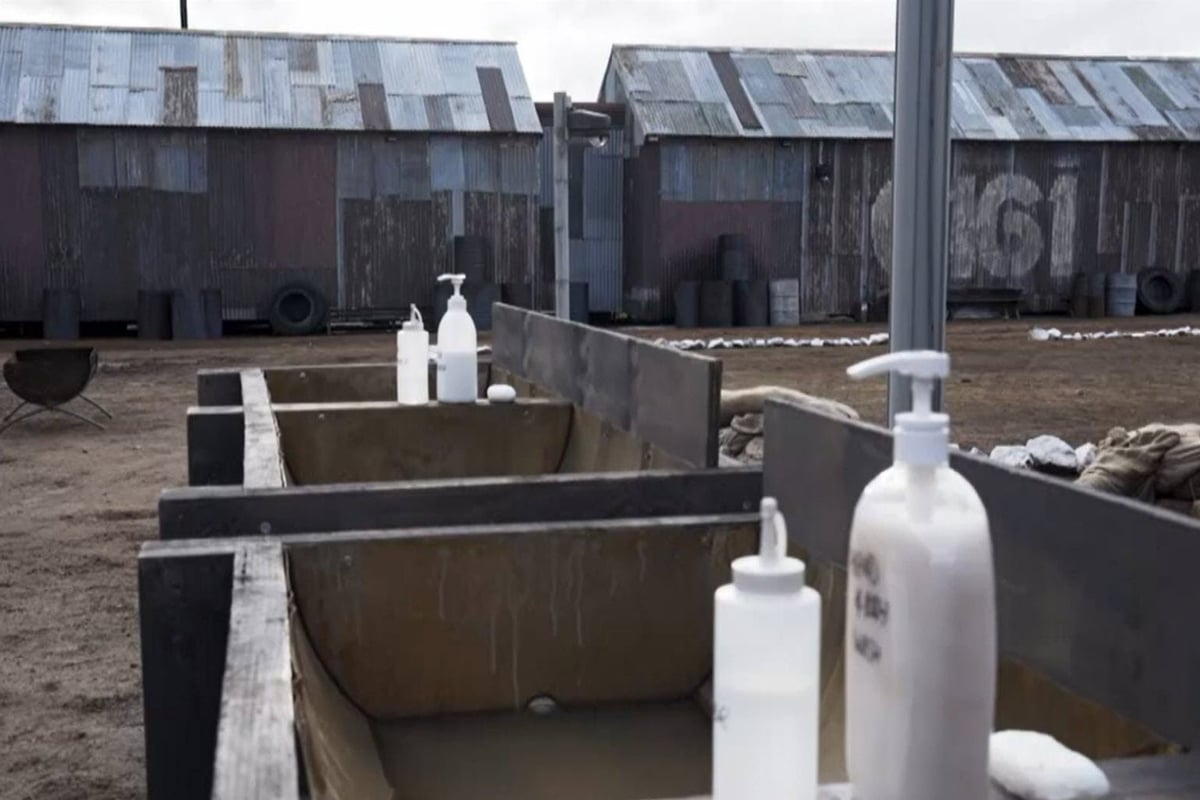 This will sufficiently clean... no one.

There were also no flushing toilets. A short-drop toilet had to be cleaned out and maintained by the recruits themselves, along with all other aspects of base maintenance.

A fire and wet clothes.

The celebs were required to chop their own wood and light fires that were the only sources of heat at camp.

These fires were also the only way they could dry their clothes, which were always either very wet or very muddy. They only had two kits, so drying one overnight was crucial to avoid wearing wet clothes in sub-zero temperatures.

There were no producers.

The directing staff (a.k.a the four angry British men who like to yell and interrogate celebrities about their f*** ups) run the entire course without producer direction.

No one entered the base except the celebs, staff and the doctor.

Oetjen said she didn't see one producer the entire time she was filming, which we can't help but feel would be a bit of... relief when compared to her time as the Bachelorette.

Former The Biggest Loser trainer Shannan Ponton said he expected a producer to step in every now and again to "ensure the camera angles were locked off and necessary content covered and maybe just check in and ensure the comfort, wellness and safety of the recruits" but... "it wasn't to be… ever".

In episode two, we saw swimmer Shayna Jack get winded bad enough she suspected she'd broken a rib. Thankfully, she hadn't, but there will be no shortage of other injuries coming up in future episodes.

According to Channel 7, there will be cases of hypothermia and celebs needing stitches. During the two weeks, the celebs needed 275 Band-Aids, 65 metres of strapping tape, 957 alcohol swabs, and they required four MRIs.

So uh... it appears this show may have been even more brutal than it appears.

E
elishatraill a year ago

Reply
Upvote
1 upvotes
Full disclosure: I’ve only seen the advertising for this show and haven’t actually watched a full episode, and acknowledge I could be way off base.
But is anyone else uncomfortable with the idea of essentially torturing people for entertainment? It seems a bit too close to bullying/abuse for my taste.  I’m a bit shocked by the number and severity of injuries experienced by the participants.
R
rush a year ago