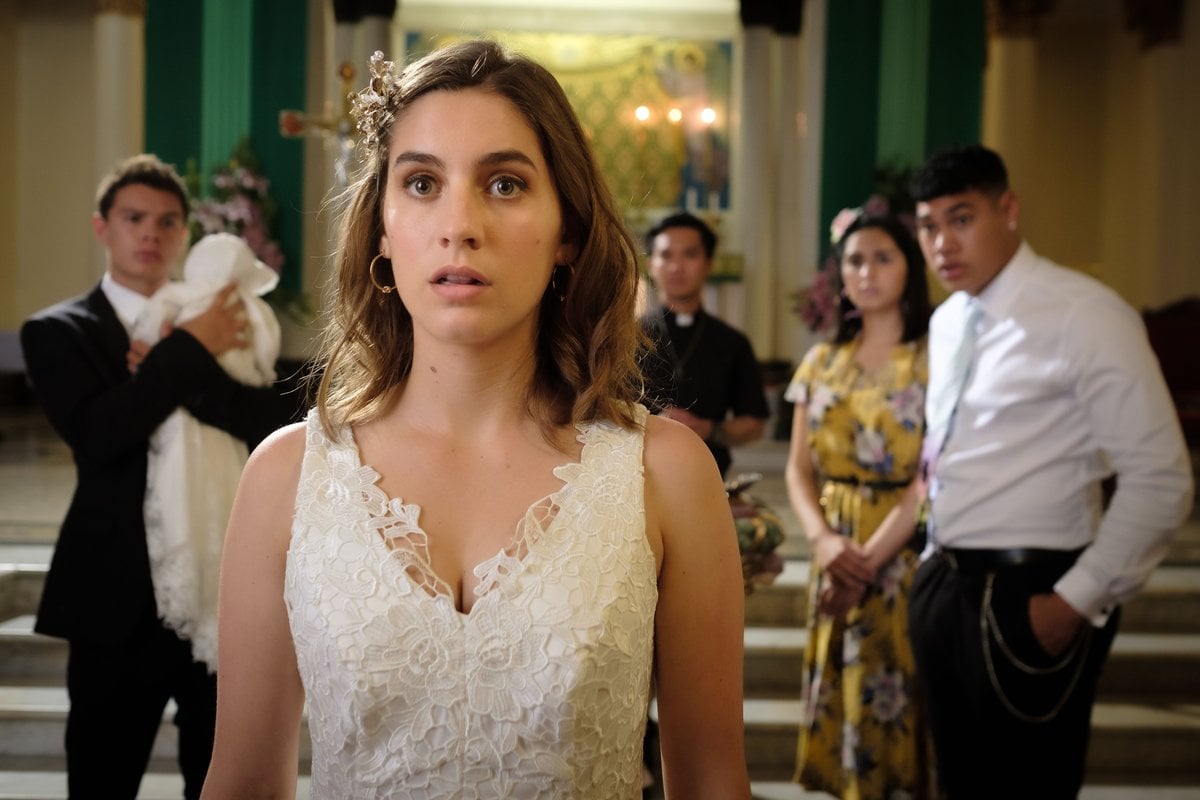 Since its arrival on New Year's Day, Australian viewers have fallen in love with the new Stan original series Bump.

The 10-episode drama centres on an ambitious high school student named Oly (Nathalie Morris) who, after being struck down by mysterious sharp pains at school, is transported to the hospital via ambulance where she gives birth to a surprise baby daughter. A baby she had no idea she was pregnant with.

It's an arrival that upends Oly's life and that of her mother, Angie (Claudia Karvan), her father, Dom (Angus Sampson), and the baby's father, Santiago (Carlos Sanson Jnr) a fellow high school student she barely knows but is now connected to forever.

Listen to The Spill WATCH CLUB: ‘Bump’ Will Make You Fall In Love With Aussie TV All Over Again.

Bump is a series that beautifully explores unplanned motherhood, unwelcome new relatives, and unintended consequences, through both a dramatic and a comedic lens.

But there's also so much more to this new, critically acclaimed Stan original series than just what you saw on screen.

1. The Bump screenwriter’s original pitch was wildly different from what ended up on the screen.

Kelsey Munro is a writer, researcher and journalist whose work has been published in the Sydney Morning Herald, The Guardian and Rolling Stone.

Bump is her very first commissioned TV show (what a way to start...).

While working in journalism, Kelsey decided that she really wanted to try her hand at screenwriting and so she originally pitched an idea for a series that centred on newspaper journalists to producer Dan Edwards.

Impressed by her overall talent, Dan invited her to come up with a different idea and so the concept for Bump was born.

“Kelsey came in and pitched a story based on the teenage girl not knowing she was pregnant. Dan (Edwards) and I just looked at each and knew that Claudia would be perfect for the role of the teenager’s mother," said Bump producer John Edwards, who also worked with Claudia Karvan on some of Australia's most successful shows including Love My Way, The Secret Life of Us and Spirited.

2. Claudia Karvan had a personal connection to the storyline in Bump.

"We called her there and then and, amazingly, a girl at her daughter’s school had had a similar experience.

We sent her the material Kelsey had written, and she also fell in love with it,” John Edwards said via Bump's production notes.

Claudia Karvan said playing Angie appealed to her because of Oly's big dreams for her future.

"The hurricane that she experiences vicariously through her daughter is just as conflicting as the upending it does to her own life, which is also in a state of flux," Claudia said of the role, via Stan.

"And the pregnancy at my daughter’s school, where a girl in Year 10 had decided to keep the baby, had always fascinated me...the dilemma, the decisions to be made, the impact on a young girl’s life." 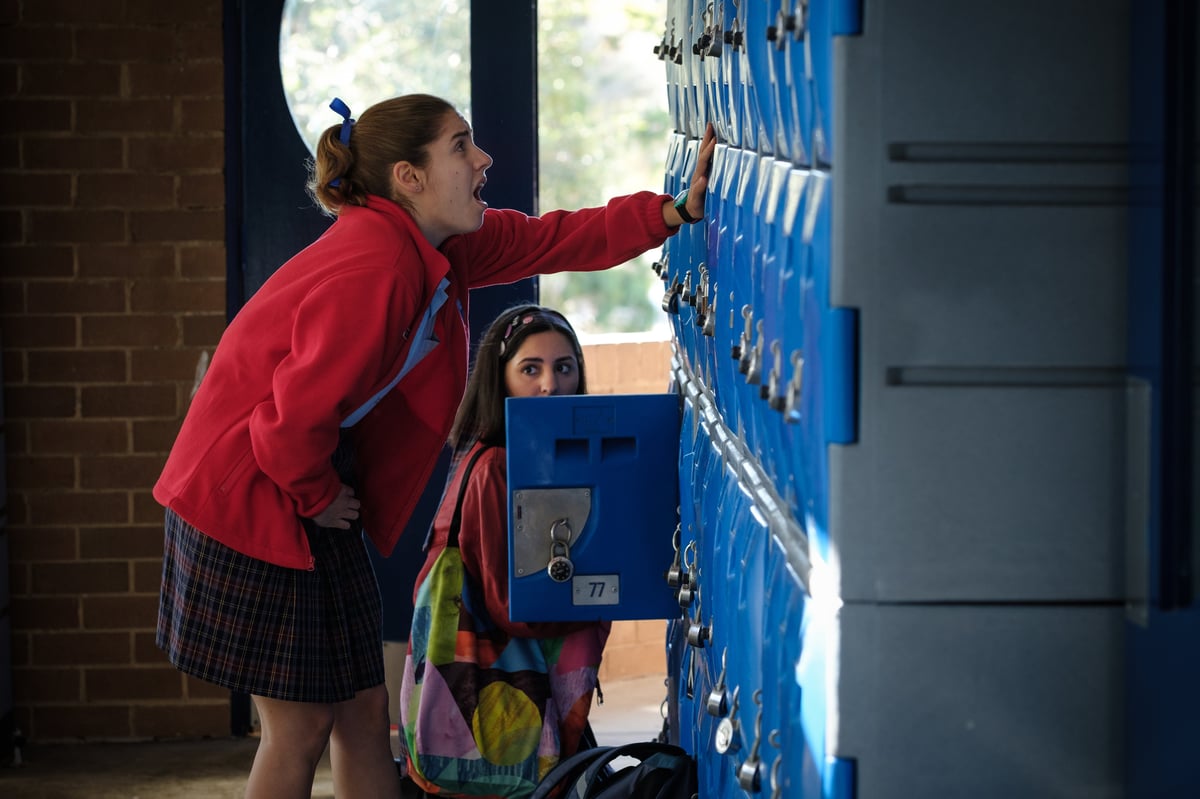 Nathalie Morris as Oly in Bump. Image: Stan.  3. The actor who played Lachie fell into acting after a chance encounter with King Kong.

In Bump actor Peter Thurnwald makes a memorable addition to the series as Lachie, Oly's initial boyfriend who is also not the father of her baby, even though they pretend he is for a few episodes to keep the real father's identity a secret.

Peter is an adopted South Korean actor, writer and director who was raised on the Gold Coast, and acting was initially not his chosen career path.

Whilst studying physics at the University of Queensland, Peter was also working as a stand-in on a range of films and while doing so played small featured extra roles in Australian-filmed blockbusters like King Kong: Skull Island and Thor: Ragnarok.

Peter's time on set quickly ignited a passion in him he never knew he had and so he decided to throw out his original career plan and pursue a career in front of the camera. Instead of finishing his degree, he auditioned for the Western Australia Academy of Performing Arts (WAAPA) and graduated with a Bachelor of Acting.

4. Diversity was a driving force in the production of Bump, both on-screen and behind the scenes.

According to Stan, Claudia Karvan has friends in the Australian Latin-American community and so the idea of creating the Hernandez family and bringing the richness of Latinx culture to the series was born from her desire to showcase what the Australian population really looks like.

If you look closely at Bump, even the school population features students with various cultural backgrounds and gender identities.

One of the three directors of the series is Argentinian-born Leticia Cáceres who said that showcasing diversity in Bump was a driving force for the entire cast and crew.

"I’m really proud of the diverse cast that we assembled," she said via Stan. "And the way that, during filming, we constantly considered ways of decolonising the frame.

"For example, making sure that we had graffiti that speaks to our current political and social climate, with Indigenous flags in the background, and never forgetting that we are a part of a society that is multifaceted."

All ten episodes of Bump are now available to watch, only on Stan.

Want $50? Take our 5-minute survey for your chance to win.