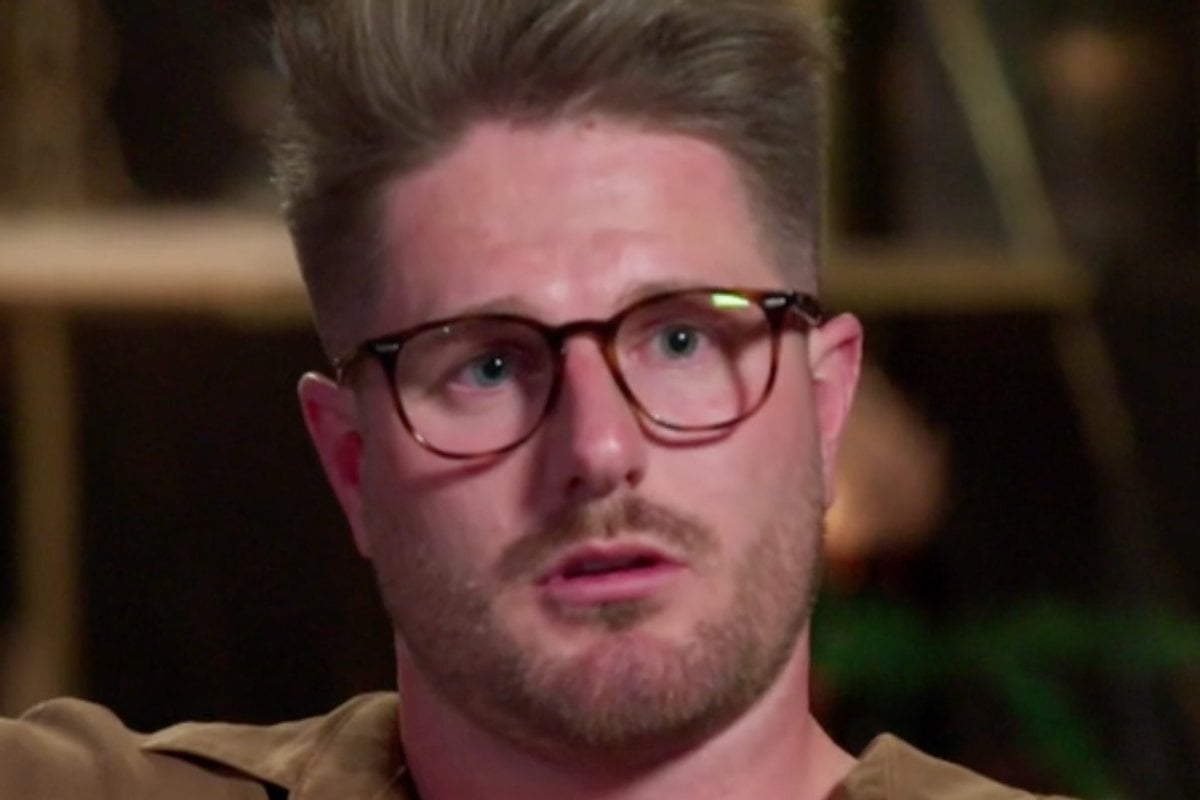 On Monday night's episode of Married at First Sight, expert John Aiken said something to Melissa and Bryce he'd been considering for weeks.

"You might get along as a couple," he began. "But you're not going to have any friends."

After six weeks in the experiment, Melissa and Bryce have clashed with almost every other contestant.

It began at the first dinner party, when Bryce confronted Sam about his poor behaviour towards his wife Coco. By the end of the night, Bryce threw a glass of water into Sam's face. He claimed to be standing up for women, despite the fact in the same week Bryce had told his wife she wasn't his "type", because he prefers "blue eyes". He eventually conceded she wasn't "ugly".

Watch: We're in the final weeks of Married at First Sight. Post continues below.

He would then rank Melissa fourth out of a lineup of eight women in terms of attractiveness.

As the weeks wore on, Bryce approached the woman he ranked number one and told her how attractive he found her. According to her, he also confessed to having a "secret girlfriend" on the outside, which other contestants have since verified.

When spoken to about his behaviour, Bryce has claimed on multiple occasions he's being "bullied". He rationalises that the woman he is feuding with, Beck, is probably just "in love" with him.

He has worked hard to convince Melissa she is being "bullied" and alienated by the group, starting fights with other contestants under the guise of standing up for his wife. She now won't spend time with anyone in the experiment, without Bryce present.

If Melissa dares ask a question about the accusations circulating about him, or challenges his aggressive behaviour, Bryce threatens to leave. Last week, he taunted her with the threat.

While away on a retreat last week, Bryce aggressively attempted to kiss Beck on the cheek following a sarcastic apology. Beck has since said she felt "violated" and the incident led to production being shut down for a day.

And then came the latest controversy. According to contestant Alana, Bryce has been telling people he plans to be single by New Year's Eve, and looks forward to partying with the boys on the outside. He has been accused of "belittling" his wife behind her back.

Although viewers are aware scenes are edited and manipulated, with some storylines exaggerated and others omitted entirely, there is an argument that we're watching a toxic relationship unfold on our television screens. Other than John Aiken's remark last night, there has been very little critical analysis of what appears to be the beginnings of a dangerous relationship.

But last night, we saw Bryce at his most manipulative. And it was when he said the words: "I'm falling in love with Melissa".

Melissa sat on the couch at the Commitment Ceremony and said she felt like she was on a "sinking ship" and wasn't sure she could see a future for their relationship. For the first time in weeks, Melissa stood up for herself.

While she called Bryce's behaviour "unhealthy", he sat beside her in silence. At no point did he take accountability.

That's when he said it. The six words she's been desperate to hear.

He had never said them before. He didn't say them to Melissa in private during an intimate moment, or last week when she asked him for reassurance. Because that would've meant the relationship was on her terms. And that's the last thing he wants.

He felt Melissa edging away from him and looking more critically at their relationship. And he told her what she wanted to hear.

It is textbook manipulation.

It's the partner who tells you you're the best thing that's ever happened to them right after they cheat on you.

The partner who makes you feel absurdly appreciative when they say something complimentary, because of how many times they've criticised your appearance.

The partner who says they can't help how strongly they feel about you in an attempt to justify their aggression.

Melissa is being led by Bryce in a complicated dance, where he takes and takes, until he gives her a single breadcrumb before she musters the courage to leave him.

Sometimes, the most dangerous words aren't the criticisms.

At least they're easy enough to spot.

Sometimes, it's the words we're most desperate to hear that can do the most damage: "I love you".

F
findingnemo a year ago