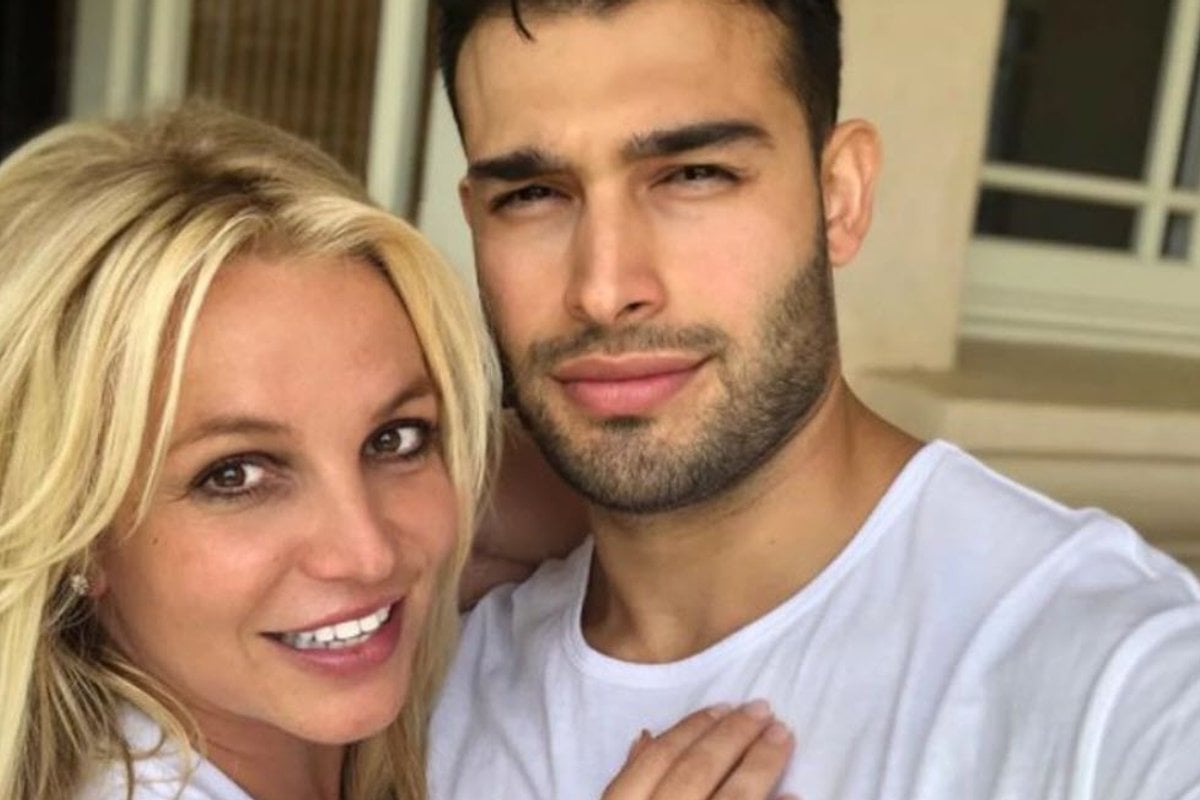 In news that may get you crying into your coffee, Britney Spears has announced she is expecting a baby.

On Instagram, she said she and partner Sam Asghari noticed changes in her body, though they initially believed it to be a 'food baby'. She decided to do a pregnancy test anyway, and "uhhhhh well... I am having a baby", she wrote alongside a baby emoji.

Her statement went on to share some of the struggles she faced during her previous two pregnancies with son's Sean and Jayden, and spoke about her issues with paparazzi.

"I obviously won't be going out as much due to the paps getting their money shot of me," she wrote.

"It's hard because when I was pregnant I had perinatal depression... I have to say, it is absolutely horrible. Women didn't talk about it back then, some people considered it dangerous if a woman complained like that with a baby inside her. But now women talk about it everyday.

"Thank Jesus we don't have to keep that pain a reserved proper secret."

Sam shared artwork of a lion family, a reference to his nickname for Britney - 'lioness' - on his Instagram account.

"Fatherhood is something I have always looked forward to and I don't take likely," he wrote.

"It is the most important job I will ever do."

Britney has been open about her desire to have another child, including in her damning court testimony in June 2021 which aired her problems with her 13-year conservatorship publically for the first time.

"I would like to progressively move forward and I want to have the real deal, I want to be able to get married and have a baby," Britney said in court.

"I was told right now in the conservatorship, I'm not able to get married or have a baby, I have an [IUD] inside of myself right now so I don't get pregnant. I wanted to take the [IUD] out so I could start trying to have another baby. But this so-called team won't let me go to the doctor to take it out because they don't want me to have children — any more children. So basically, this conservatorship is doing me WAY more harm than good."

Britney was finally freed from her conservatorship in November 2021, almost 14 years after it was initially set up.

In the months since, Britney has documented her newfound freedoms - like her excitement about buying candles for herself, and being able to drive with Sam in his car alone - on Instagram.

"I found his number in my bag. I was like, 'He is really cute. This guy is really cute'. So then I called him, and ever since then, he is just a really fun, funny person," she explained on Fast in the Morning With Nathan Fast in 2017. 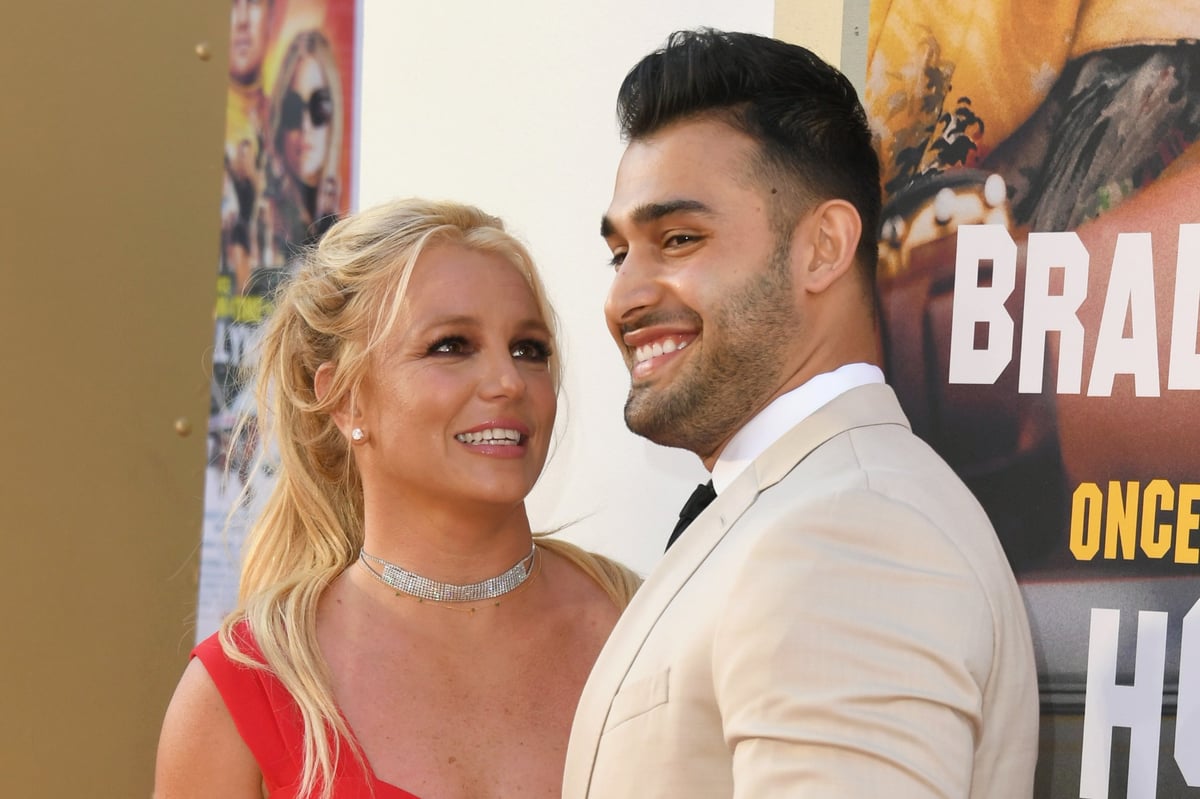 In 2019, Sam said the pair had a normal, supportive relationship.

"What I love the most about my relationship is the fact that it’s so normal. It's not glamorous or anything," he told US Weekly.

For years, he remained diplomatically quiet about her conservatorship situation.

But in 2021, following the release of New York Times documentary Framing Britney Spears and Britney's more public fight for freedom, Sam spoke up regularly on her behalf - even suggesting that her father Jamie was "a total dick".

"It's important for people to understand that I have zero respect for someone trying to control our relationship and constantly throwing obstacles our way," he wrote on Instagram.

Throughout 2021, he was regularly seen wearing #FreeBritney t-shirts.

In recent months, Britney has referred to him as her 'husband', though there has been no official wedding announcement.

This is Sam's first child, and third for Britney. She shares 16-year-old Sean and 15-year-old Jayden with ex-husband, Kevin Federline.

D
draculasgirlfriend a month ago

Reply
Upvote
Britney is a strong, awesome lady who has been through alot!!!! I wish her all the best in being a mother again!!
M
mamamia-user-482898552 a month ago

In news that may get you crying into your coffee, Britney Spears has announced she is expecting a baby.

Personally, I find it concerning, rather than a reason to cry into my coffee. Britney hasn't been well for a long time, and her previous pregnancies and experiences of motherhood haven't been raging successes. I honestly wish her all the best - she's had a really rough trot, but I don't think this announcement - like the end of her conservatorship - is the fairytale it's being made out to be. For the sake of this unborn child, I hope I'm wrong.
L
laura__palmer a month ago

Reply
Upvote
3 upvotes
@mamamia-user-482898552 She's quirky and funny and has a supportive partner and I think she'll be fine. Your concern is patronising and that is the last thing that Brittney needs. The conservatorship was wrong, she did not need to have that level of supervision and the courts agreed. She gets to live her life and the public need to let her. Her breakdown was caused by an overzealous public, press and paparazzi scrutinising every aspect of her life and harassing her to the point she had a breakdown. Anyone would have cracked under the microscope she was living under, she wasn't allowed to make mistakes and learn from them when it came to being a mother because everything she did was documented. I hope for her unborn child's sake the press and the public give her the privacy she deserves.
M
mamamia-user-482898552 a month ago

Reply
Upvote
2 upvotes
@laura__palmer I honestly hope you're right. I don't hold the same level of optimism, but I guess we'll see.
C
cat a month ago

Reply
Upvote
2 upvotes
@mamamia-user-482898552  you keep beating this drum that she's not well without doing any research. Whats the evidence? Why is it your business? Its such a boring misogynist standpoint to keep saying that she's too crazy to handle life.
She has wanted this child for a long time and been prevented from having it. Many, many people with a history of mental health issues are great parents. She has a partner, and all the financial support she could ever need. She does not appear to suffer any substance abuse issues or have a history of child abuse. This child is coming into the world with a significant head start in life, there are millions more that we should be far more concerned for.

What information do you have about her previous pregnancies? As far as Im aware they were uncomplicated. As for her "experiences of motherhood", she was literally held captive, it's wildly unfair to judge her on that and imply she's an unfit mother.
You don't have to feel happy for her, but being publicly concerned about her having a child is both unhelpful and unkind. It certainly does not come across that you wish her all the best when you take every opportunity to throw doubt on her abilities without any basis. Let the poor woman live without the ongoing criticism.
L
laura__palmer a month ago