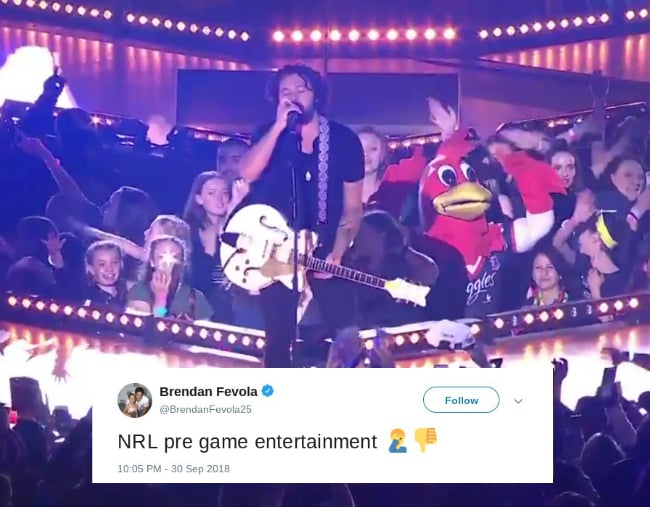 Former AFL player Brendan Fevola learned the hard way: Do not shade Gang of Youths online. Because they will see it, and they will… well, own you.

NRL and AFL fans were divided over which grand final had the best pre-game entertainment this weekend.

The homegrown talent performed three songs from their ARIA award-winning album, Go Farther In Lightness but apparently they don’t have quite the name recognition of the Black Eyed Peas.

This led many people to ask who they were, and Fevola made clear he was not a fan of the entertainment choice.

Even Fevola had to admit that was a great comeback.

Gang of Youths are known for their 2017 single Let Me Down Easy which became their first top 50 single in Australia. Their second album, Go Farther In Lightness, debuted at number one on the ARIA Albums Chart in August 2017 and was nominated for eight awards at the ARIA Music Awards of 2017, winning four: Album Of The Year, Best Group, Best Rock Album and Producer of the Year.

Luckily for the band, not all the comments were negative. Many praised the NRL’s decision to showcase local talent.

Dave from Gang Of Youths and some old bloke….great gig tonight at the GF the boys were awesome proud to see my Polynesian Australian brothers doing us all proud! Cheers Jon x pic.twitter.com/3DVI98bDUI

Hope the AFL bosses are watching this. This is pre-game entertainment done right. @gangofyouths absolutely killing it. #NRLGF

I am LOVING this from @gangofyouths. So so great to see such an excellent Aussie act on the #NRLGF   stage ????????