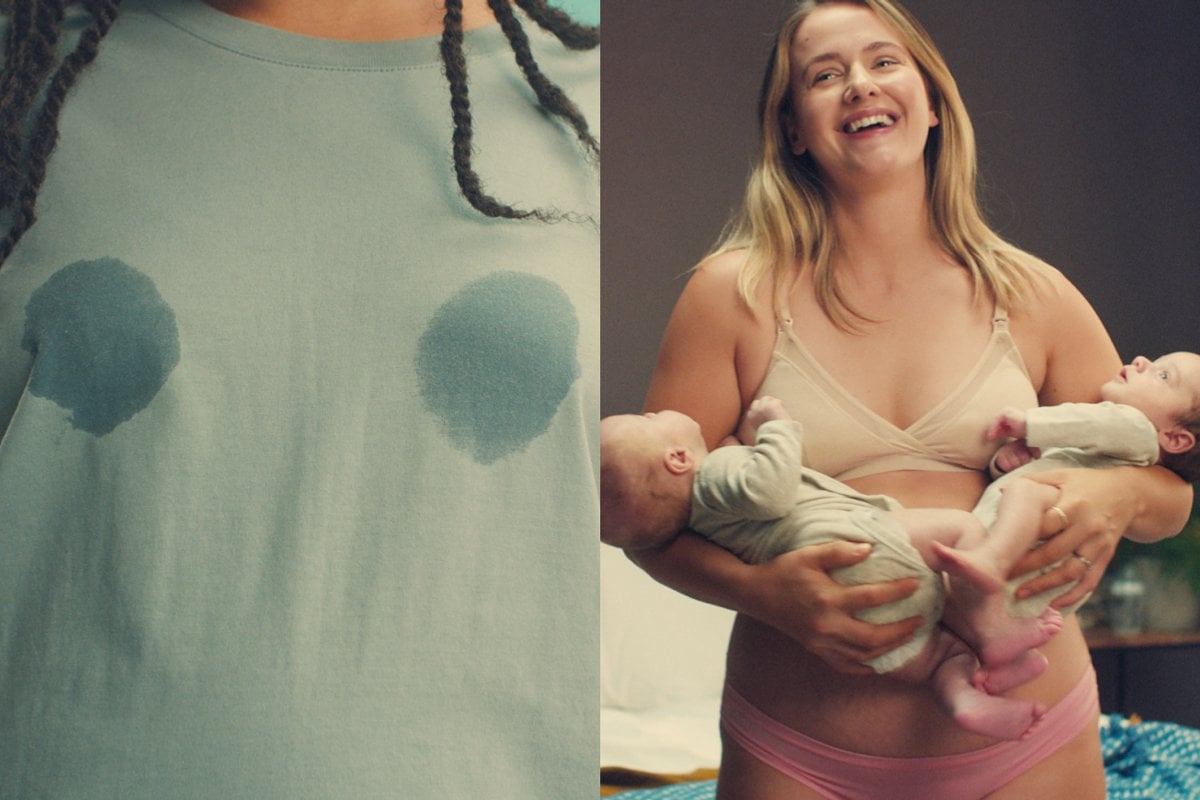 What image do you get when you think of breastfeeding? A woman smiling as she looks down on a baby peacefully suckling on her breast, nipple tastefully obscured from view? Or maybe something more messy or awkward, like milk leaking from a woman’s nipple? Maybe a woman expressing milk by hand into a bottle, or working on a computer while using a breast pump?

There are boobs – lots and lots of boobs of all different shapes and sizes.

The 60-second ad had an MA 15+ rating slapped on it for nudity by Australia’s ad review platform ClearAds. That rating was later downgraded to M. But Facebook refused to run even a censored, no-nipple, 30-second version of the ad, labelling it “adult content”. Only a 15-second version, focusing on the products, has been approved.

It’s like last year, when Modibodi’s period underwear ads ran into trouble with Facebook, because they showed period blood as being red. Once again, an ad is being penalised for showing the reality of women’s bodies.

Tommee Tippee made the ad in response to research showing that 93 per cent of mums believe the emotional, mental and physical challenges of infant feeding don’t get enough acknowledgement.

It features UK mums and babies (and one dad), including Natasha Mushonga and her baby Lowi, Hannah Renew and her twins Leo and Xander, and Zoe Chan-Eayrs and River.

“I love this!” Pollard posted on Instagram. “So fabulous! More of this!”

“I love it,” she tells Mamamia. “I think it just shows so many different breasts and nipples that I’ve seen in my career and you possibly haven’t! It’s really nice just to see healthy women breastfeeding their babies.”

Curtin thinks it’s “crazy” that the ad has been restricted and labelled as “adult content”. She thinks it’s important for not just women but also men, including young men, to see women breastfeeding.

“It’s normal and it’s natural and there’s nothing to laugh about,” she explains. “It’s not sexual. It’s such a privilege to feed a baby. I really think our young women and our young men need to see it because it is natural and to demystify it.

“If we can’t show the really basic process of [breastfeeding], I think we have to have a good hard look at ourselves.”

As for the ad showing breastfeeding as messy and awkward, with pumps attached to breasts and milk leaking from nipples, Curtin thinks mums will appreciate that.

Come and work a day with me and I’ll tell you what the hurdles are for breastfeeding. We need to support women in their early days because if we give a lot of support then breastfeeding can be long term.”

In fact, Curtin would like to see material that goes even further.

“I could do another video of things that would be shocking: cracked and bleeding nipples, mastitis, engorgement, women crying, depressed, anxious, a low milk supply. To me, that video is part one... but there’s another one. There’s more education.”

Want to read more of our parenting content? You can find all our best stories over here.

Reply
Upvote
1 upvotes
It sounds like the kind of ad that would encourage bottle feeding. Not particularly surprising from a bottle making company.
C
cat a year ago