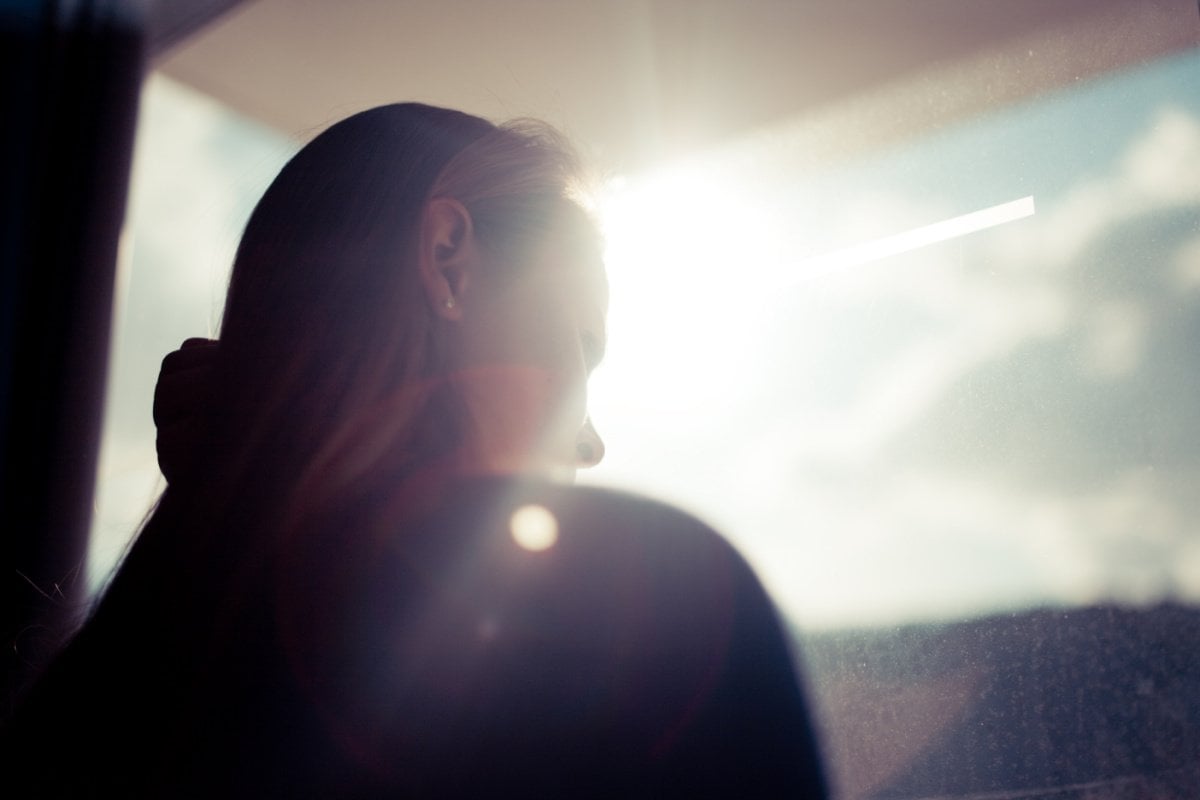 In the middle of Victoria's 112 day lockdown last winter, Michelle's* cousin Kevin* wasn't trying to hide the fact he was flouting the rules.

As the state recorded hundreds of new COVID cases daily, he was posting on social media while out and about.

He was blatantly ignoring the 5km radius rule, the four reasons to leave the house and the 8pm curfew.

Michelle had, for her own sanity, initially just blocked Kevin and his immediate family from her social media feeds so she didn't have to witness their blatant disregard for public health.

But when the rule breaking started to involve her elderly grandparents, she saw red.

Sidenote: A big thankyou to masks....post continues after video.

"I was on my daily walk. My grandparents live a couple of streets away from me, and I saw his car parked in their driveway," she told Mamamia.

Kevin lived about 30km away from the area, and as Michelle found out later, he'd decided to pop over for lunch.

"My grandma also called my Dad to tell him that my cousin had come over if he wanted to come over too, which really made me feel like my cousin was taking advantage of their kindness and also lack of understanding about the rules and restrictions as English is not their first language, so at times they misunderstood what was and wasn't okay," she explained.

So Michelle anonymously dobbed him in to authorities. While she didn't provide his name, she did supply his registration and described his car in her submission.

"I was so angry at him. I was so furious that he could potentially put my grandparents at risk. I didn't feel guilty at all (about reporting him), although it did cause an argument with my parents who thought I shouldn't have done it," she told Mamamia.

Michelle says nothing, disappointingly, came of her report and Kevin never found out that she'd dobbed him in. But if she had her time all over again, she wouldn't change a thing.

"While I agree that the lockdowns were difficult for everyone, and we all missed our family, I still don't think it's an excuse to put elderly people at risk for your own selfish reasons."

Close to 38,000 fines were handed to Victorians for breaching coronavirus restrictions since the start of the pandemic until March 31 this year, according to crime statistics.

But right now it's NSW that's logging the brunt of breaches as Sydneysiders - many of whom aren't as conditioned to a life in lockdown - break the rules.

13 members of the NRL Dragons have been fined $1000 each by NSW Police and a combined $305,000 by the NRL for an illegal house party on the weekend.

At least 12 Dragons players were fined $1000 each for attending an illegal house party. #9News https://t.co/AwEXui88TQ

In one 24 hour period, 125 personal infringement notices were handed out to people breaking lockdown orders in Greater Sydney, with police receiving over 1000 calls in that timeframe from people who had believed COVID-19 rules were being broken.

Read: 'I live in the middle of Sydney's Eastern Suburbs. All weekend I watched people bend the rules.'

In the regions, they're not mucking around, with businesses and locals quick to report Sydneysiders who've managed to slip into their communities.

"It goes against our culture a bit to dob in, but at the same time you could be saving a lot of lives," manager of Coffs Harbour's Harbourside Markets, Kim Towner, told the ABC.

In places like Jindabyne enjoying a bustling snow season, police have upped their presence and accomodations are screening bookings to weed out anyone trying to book from a hotspot.

As a self-confessed "dobber" Michelle says it's important to remember what we're fighting for right now. We are still, after all, in the middle of a pandemic. As rough as the restrictions are they're in place to protect our health and to prevent us from entering into much longer, harsher lockdowns.

"I would say that you should go with your gut and do what you think is right. Things also feel very different when your loved ones are at risk....I never thought to dob anyone in, but the thought that someone blatantly ignoring restrictions could impact my family and my life created a reaction in me that I didn't think I'd have," she told Mamamia.

*Names changed for privacy reasons. The image used is a stock image.

A
alexharley22 a year ago

Reply
Upvote
I live on the Central Coast and it is ridiculous the number of people who are still living as if we aren't in the middle of a pandemic. We haven't had a case of covid since August so there are many people who believe that we shouldn't be under the stay at home orders. We have lots of people from Sydney up here holidaying, and lots of people are voicing the opinion that they should be able to, that if I am concerned about the risks I should follow the public health order and leave others alone. Like many people who live and work on the coast, I rely on the tourism industry for my income however I like many people are unable to work. It is amazing how self absorbed society has become, we have lost the Aussie spirit of looking after our mates, now it is all about looking after yourself at any cost. How many deaths will it take for people to start caring about their family, friends, neighbours etc?
K
kitty-willow a year ago

Reply
Upvote
@alexharley22 sorry but its not true theres been no cases since august, there were cases linked to the avalon cluster in summer and 2 cases so far this time on the central coast. other than it was a good comment
M
mamamia-user-228326057 a year ago

Reply
Upvote
9 upvotes
My 4 year old daughter is in active treatment for cancer, she is immuno compromised and a textbook ‘vulnerable person’ we’re praying and relying on the consideration of EVERYONE in our community to protect her life. It enrages me to see people flouting the restrictions for their own selfish sense of entitlement. I understand that people feel it’s safe for themselves but the elderly and vulnerable
deserve our respect and protection.
C
cat a year ago

Reply
Upvote
@mamamia-user-228326057 it seems like this message keeps getting lost- that this isn't about having zero cases because it sounds good- its about the people who need to be protected, through no fault of their own. People seem to keep thinking that its their risk to take, or that they don't feel they will get covid (because of their amazing immune systems) so they can do what they like.
News
General
Opinion
True Crime
Politics
Sport
Explainer
Entertainment
Celebrity
Reality TV
Movies
TV
Books
Rogue
Royal
Lifestyle
Beauty
Fashion
Weddings
Home
Wellness
Health
Fitness
Travel
Food
Parents
Before The Bump
Pregnancy
Baby
Kids
Teens
School
Parent Opinion
Work & Money
Money
Finance
Career
Lady Startup
Relationships
Sex
Dating
Separation
Friendship
Family
Real Life
Couples