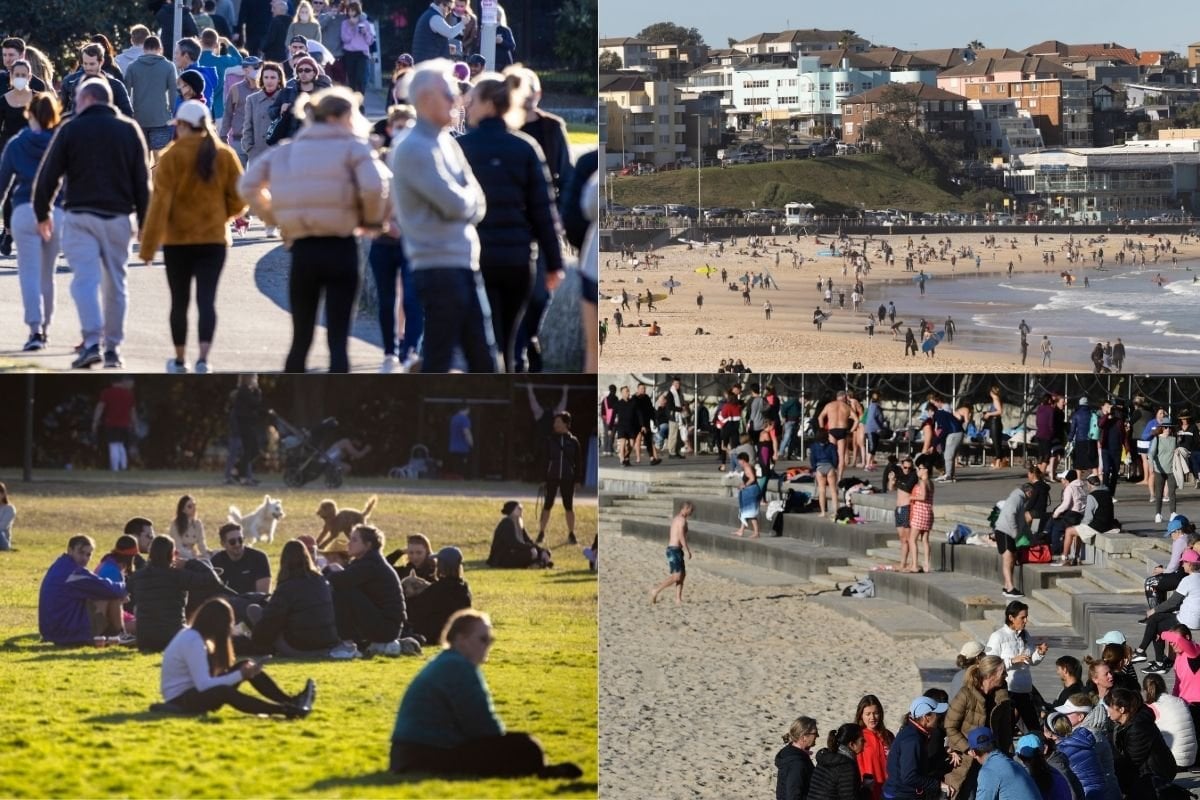 I spent the majority of the weekend inside the walls of my apartment, which is situated smack bang in the middle of Sydney's current COVID outbreak.

I cooked a lot. I painted some furniture. I watched season two of Too Hot To Handle in its entirety and I Facetimed my family and friends.

I left the house to exercise and buy groceries both days, but during the handful of times I ventured outdoors I found myself quite taken aback.

There were people... everywhere.

It was beautiful weather, and during a drive-by of some of my local haunts I discovered both the Coogee and Bondi boardwalks packed full of un-masked crowds.

Centennial Park and every cafe along the beach was brimming with coffee sipping friends milling outside chatting in packs.

The parks were overflowing with picnic-ers and friends hugging eachother hello and goodbye.

Every third person, it seemed, had their mask just covering their mouth and not their nose in busy supermarkets.

When I flicked on the news, I discovered that 13 NRL players had gathered for a house party in Shellharbour in an arrogant, blatant breach of the rules.

Another illegal party in Waterloo has already been linked to three positive cases.

The Dragons are in damage control tonight after several players were caught up in a COVID breach. @Danny_Weidler #9News pic.twitter.com/cyGboT7Ija

At first, I felt only anger and betrayal as I thought to myself, hang on, I've been sacrificing my weekend for the greater good in the middle of a lockdown while much of Sydney is out here living their best lives?! Well, that's us locked in for longer... humph.

But on further reflection, and after another glance at the NSW lockdown 'rules' I realised something. How on earth are we supposed to be encouraged to take this lockdown seriously and 'stay at home' like NSW Premier Gladys Berejiklian has begged us to do, when the regulations and messages we are getting from the government, on both a state and federal level, are so damn confusing?

You're only supposed to be at the shops for essential items and yet most retail remains open. You can go and buy yourself a new dress, no questions asked.

You can gather in groups of 10 outside, but that's for exercising, you're not allowed to have a sunbake on the beach with nine friends.

You don't have to wear a mask outside, only inside. So you can stand outside and chat unmasked for as long as you want, provided there aren't four walls around you, but maybe right now... you shouldn't. You should just get your coffee and go home.

Infectious disease specialist Dr. Sumon Chakrabarti recently told CBC, "I'd rather have 100 people outdoors in a park rather than have 20 people indoors," while stressing that outdoor transmission is exceedingly small.

But that 'small' risk increases when you're hugging, chatting in groups for longer than 15 minutes and showing careless mask practice when transitioning from outside, inside. And it was that attitude, the carelessness and casualness of everyone that struck me the most. Because we are still in a lockdown after all. We were told to stay at home.

Of these locally acquired cases, 33 are linked to a known case or cluster – 20 are household contacts – and the source of infection for two cases remain under investigation. pic.twitter.com/EzivfeHPrP

State-based confusion continues up the chain into the federal political ring.

We are in a race to get the country vaccinated so we can reopen, but sorry under 40s you can only have access to a vaccine we've told you maybe you shouldn't have. And by the way we've only managed to get 11 per cent of you vaccinated, and we only just decided to mandate it for aged care workers who are looking after society's most vulnerable.

Read: From who's eligible to the actual risks: What you need to know about the AstraZeneca vaccine.

We know most of our virus leaks come from hotel quarantine, but nah, we have decided not to use the last year to build specialised quarantine facilities as a matter of priority, we'll just make do with hotels despite lockdown after lockdown.

You may not leave Australia to see your family. But as Prime Minister, I can. As an athlete, I can. As celebrities, we can.

It's all so contradictory and for every rule there's a sub rule. Pair that with the fact that we're a country fatigued and fed up with giving up our lives and our fun.

Melbournians have been conditioned into compliance after four separate lockdowns. But for most in Sydney, particularly in the east where I am, this is all new again. And quite frankly many people have tuned out of the news for the aforementioned reasons; it's a place of confusing, political bickering.

On the weekend I saw Sydneysiders enjoying their days off and bending the COVID rules in the middle of what we're being told is NSW's most "dangerous" outbreak yet.

But given we spend our week watching our politicians delivering mixed messages, and allowing non-essential services and businesses to remain open for trade, can we really blame them from taking advantage of that?

It's hard to take month 16 of a pandemic seriously when those in charge aren't leading by example.

Reply
Upvote
4 upvotes
This is what happens when a) the lockdown is not properly enforced and b) the population has been conditioned to believe lockdowns aren't necessary. Gladys has fallen into both these traps. The Victorian lockdowns worked so well because Daniel Andrews enforces the rules with an iron fist and doesn't worry about upsetting people. Gladys needs to stop begging and start enforcing. At the moment she is coming across as weak and apologetic. It isn't going to get the job done. Of course none of this would be necessary if the Federal Government would fix quarantine and speed up the vaccine rollout, but that is another article in itself.
C
cat lady 3 months ago

Reply
Upvote
@millie1986 I agree with this 100%.  I’m in WA and because our lockdowns are hard and fast, for the majority of the pandemic we’ve been able to live normal lives (except for travel obviously).  I am horrified at what is going on in NSW.
C
cat 3 months ago

Reply
Upvote
@cat lady WA has never had the sort of situation NSW is dealing with, where someone highly infectious was in the community for many days. If someone with Delta walks through Forrest Chase and everyone becomes a potential carrier, then it might be comparable. Until then, get off your high horse, while WA has sheltered behind its border NSW has taken on the vast majority of the risk from returning travellers & done exceptionally well until now.