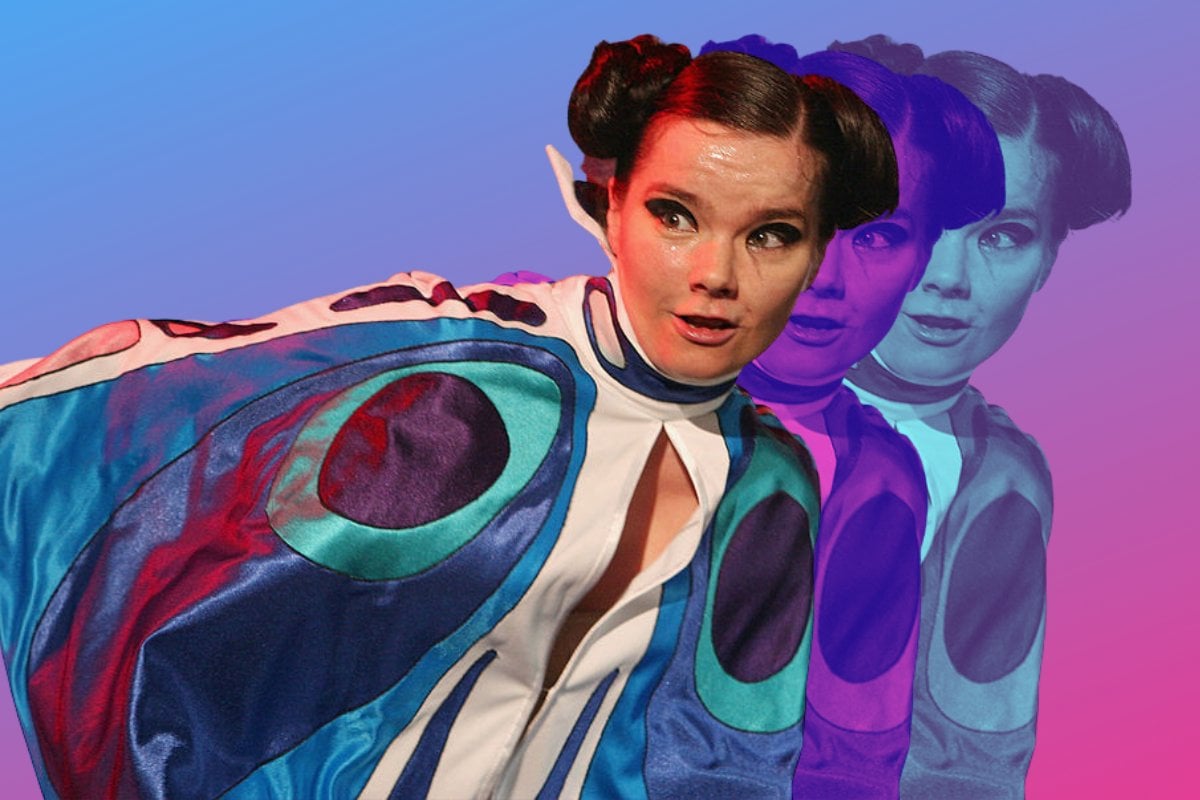 Is Björk’s son a better songwriter than she is?

An interview he gave, making that claim, has just resurfaced. But Sindri Eldon, who has a son of his own – yep, Björk is a grandmother – wants to tell the full story.

He does write songs, but says he was just “dicking around” when he said he was a better songwriter than his mum, who has sold more than 20 million albums.

Side note: Our favourite celebrity #oldheadshots. Post continues below.

“Anger, self-loathing and self-sabotage are things I’ve struggled with a lot in my life,” he wrote on Twitter.

“Like everyone who likes their parents, I grew up wanting to be like them, but they made it look so easy, so I didn’t really put the work in like I should.”

So what’s the inside story on the family life of Björk, swan wearer and owner of one of the world’s most distinctive voices?

Björk was born Björk Guðmundsdóttir in Iceland in 1965 to a mum, Hildur, who hated being a housewife.

Hildur divorced Björk’s dad, Guðmundur, when she was still a baby and took her to live in a hippie commune.

“Can you imagine being brought up by seven grown-ups, who all hate work, and all they want to do is play games with you all day long, and tell you four-hour-long stories, and make kites?” Björk once said.

Björk’s mum got married again, to Sævar Árnason, “the Jimi Hendrix of Iceland”, and Björk started attracting attention for her singing voice. She released an album at the age of 11, but says she hated being a child star.

“I think children should pick for themselves,” she told The Guardian. “They shouldn't be pushed. I was too young.”

Growing up, Björk fantasised about David Attenborough and always fell for “the guy in the back of the class with really thick glasses and the insect collection”.

But by the age of 15, she’d quit school and got into punk music, forming a series of bands with names like Spit And Snot.

Björk hooked up with a bass player, Þór (Thor) Eldon, and had son Sindri with him by the time she was 20. She insisted that wasn’t young for Iceland.

“Most people have 'em when they're about 16,” she told The Guardian. “It's rural out there.”

The couple divorced a year later, but stayed together in the band The Sugarcubes, which took off internationally.

Björk was living in London as a single mum when she launched her solo career, scoring top 10 hits with songs like “It’s Oh So Quiet”.

She had a string of relationships, including with musician Tricky and, later, with another musician, Goldie.

“There's definitely been places where I fell really easily in love,” she said.

Björk took Sindri on tour with her, but things went very wrong when she landed at Bangkok airport in 1996. 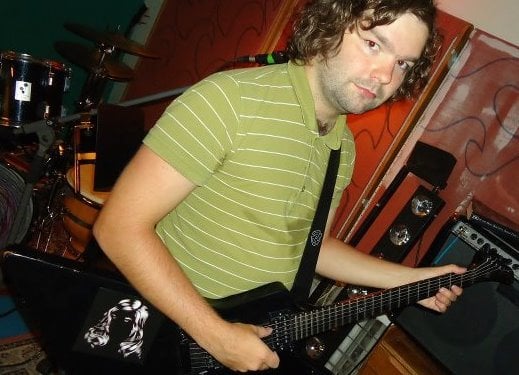 Bjork's son Sindri is in a band, Sindri Eldon and the Ways. Image: Facebook.

Björk pulled her to the ground and repeatedly knocked her head on the concrete until security dragged her off.

That year was a bad one for Björk.

When she was engaged to Goldie, a disturbed fan objected to the idea of her marriage. He sent her a bomb filled with acid and then killed himself with one of her songs playing in the background.

Fortunately, police intercepted the bomb before it got to Björk’s house.

Saying she was “very upset” over the death, she left London.

“It destroyed my home,” she said. “I had to rediscover everything.”

Living in New York, Björk met multimedia artist Matthew Barney. By the time she turned up to the 2001 Oscars in that swan dress (and “laid” eggs on the carpet), they were a couple.

They acted together in an art film, Drawing Restraint 9.

“Me and Matthew actually sculpt each other in the film, we remove each other’s legs and we end up swimming after the ship as two whales,” she explained to New York magazine.

The couple had a baby, Isadora, in 2002, and their home life was “more regular than people think”.

“People are not going to believe it, I know, but I’ve always been a bit of a homebody. I had a child at the age of 20, and just when he was getting big, I got a new one."

They split in 2013. Björk poured her heartbreak into the album Vulnicura.

“You betrayed your own heart/Corrupted that organ/Family was always our sacred mutual mission/Which you abandoned,” she sang.

The couple ended up in court over custody of Isadora, nicknamed Doa. According to Page Six, Matthew described his daughter as “an articulate, intelligent 12-year-old girl”, who wanted to spend equal time with both her parents.

However, he claimed Björk was “effectively sacrificing Doa’s emotional well-being in favour of her own selfish desires”.

In her late teens, Isadora started taking part in climate strikes, following the lead of Greta Thunberg. Björk told The New York Times that Isadora’s generation “is extremely aware of the power of activism and I’m very proud of them”.

Meanwhile, Sindri worked as a music writer, then became a musician himself, forming his own band, Sindri Eldon And The Ways, playing “melodic power pop”. He and his wife Morgan Johnson had a son in 2019.

As for Björk, she’ll be seen on the big screen next year in the Viking epic The Northman. Her co-stars will include Nicole Kidman, Anya Taylor-Joy and, making her movie debut, Björk’s daughter Isadora.

Living in New York, Björk met multimedia artist Matthew Barney. By the time she turned up to the 2001 Oscars in that swan dress (and “laid” eggs on the carpet), they were a couple.

So no mention of her Oscar nomination, and critical acclaim for her performance in Dancer in the Dark? More important than a dress and who her boyfriend was...

Reply
Upvote
1 upvotes
@mamamia-user-482898552 everyone always goes on and on about that dress as if it was some huge fashion faux pas, but I always thought she just did it 'cos it was funny. Like, she never thought it was some amazingly beautiful couture gown, it was something a bit silly and light-hearted that showed her personality, and all the magazines etc that put her on the worst dressed lists and made fun of her just didn't get the joke.
And you make an excellent point about there being no mention of her Oscar nomination.
M
mamamia-user-482898552 6 months ago

Reply
Upvote
2 upvotes
@rush Exactly! She's hardly the sort of facile person who would care to be named on a "Best Dressed" list. She turned up in a dress she wanted to wear, as an Oscar nominee. It's a shame this part of her life was framed in the most superficial way possible (ie what she wore, who her boyfriend was), rather than concentrating on what was really extraordinary at the time (ie singer with Oscar nom, who also happened to turn in a really great acting performance in the same film).
H
hellb 6 months ago

Reply
Upvote
2 upvotes
This article made me listen to go back and listen to Hyperballad.
Seeing Bjork at the Horden Pavlova for her Post tour was a peak life experience, she was a favourite artist at the time and still pops up regularly in shuffle play.
Her talent is matched by her eccentricity, which has not always been benign - not down with that violent episode.
M
mamamia-user-482898552 6 months ago