If the closest thing you’ve come to watching a documentary lately is streaming Love Island UK, then allow us to introduce some variation into your viewing diet.

A good doco is just as transportive and engaging as watching a bunch of bikini-clad and tanned strangers hash it out on a remote beach (no judgement), and these titles will teach you something new about the world from the comfort of your couch, or doona.

From an enchanting deep-dive into one of Carrie Bradshaw’s favourite shoe designers, Manolo Blahnik, to The Final Quarter, the Adam Goodes fronted documentary everyone is talking about (and for good reason), these are the titles you simply must ‘add to queue’ this weekend.

Your brain cells will thank you.

Documenting the relentless racism that has plagued AFL-star Adam Goodes’ career, The Final Quarter is an important, confronting look at the real presence of racism in Australia.

In 2013, Goodes spoke out against the socialisation that must have occurred for a 13-year-old footy fan to shout “ape” at him during a game. The reaction was sobering. In 2014 and 2015, he was booed by stadiums of people in every game he played. 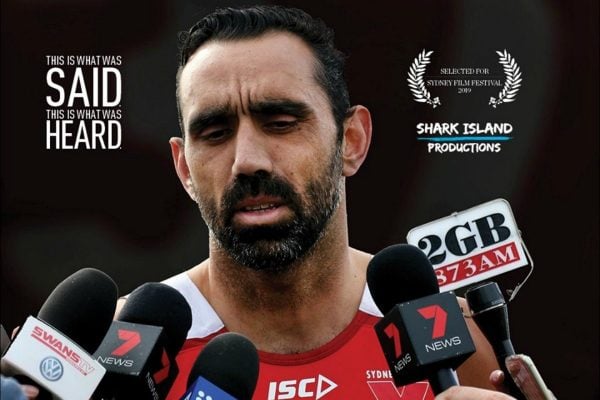 Using archival footage, this is all documented in film which will be available to stream for free on 10Play until August 16. Don't miss out.

Watch the trailer for The Final Quarter here. Post continues after video:

From 1964 to now, British filmmaker Michael Apted has checked in with 14 UK residents every seven years since they were seven-year-old children. They're now in their early 60s, and the extraordinary project is still running.

The participants were selected from all geographical and social classes of Britain, and in each snapshot of their lives, Apted asks them questions surrounding their life, career and family expectations. As they get older, we see their personalities and lives change, some for the better, others not.

The Up series has been a regular feature on 'best documentary' lists for decades, and you can watch all 16 instalments for free on SBS On Demand.

Netflix's latest food series takes you on a global tour of bustling hole-in-wall eateries, and introduces the hard-working chefs and humble talents that run them.

Each bite-sized, 30 minute chunk profiles a particular place from the street flavours of Delhi, India, to the family-owned food stalls of Chiayi, Taiwan. The episode featuring the cheeky, free-balling Sushi-master, Toyo of Osaka's Izakaya Toyo, will have you looking up flights to Japan long before the credits roll.

You can sink your teeth into Street Food on Netflix.

Manolo: The Boy Who Made Shoes For Lizards

Devout Sex and the City fans will remember Carrie Bradshaw's love of Manolo Blahnik's heels, and this doco takes us into the mind of their creator.

Far from his reputation as one of the fashion industry's most well-respected names, Blahnik came from humble beginnings, growing up on a remote Spanish island. However, even in his success, the designer's humility, curiosity and passion for his craft is gloriously obvious.

You've got until August 6, 2019, to watch Manolo: The Boy Who Made Shoes For Lizards on ABC iView.

You might have studied the downfall of the Romonovs, or the Russian Revolution in Modern History, but don't let that turn you off Netflix's latest docu-drama.

All the expected suspects are here: we have the last Czar of Russia, Nicholas II, and his wife, Alexandra Feodorovna, as well as Princess Anastasia and famed mystic-turned-madman, Grigori Rasputin.

Head to Netflix to watch all six episodes of The Last Czars.

Outrageous, hilarious and oddly life-affirming, these pensioners truly show that age is merely a number. From a trip to the sex shop with 82-year-old Lynn, who is preparing a burlesque show as the 'world's oldest stripper,' to 72-year-old Sophia's hunt for "a toy boy," these women have absolutely no intention of "acting their age," and we're all the better for it.

Think of this as Bachelor in Paradise, but with fearless septuagenarian and octogenarians, instead of influencers. You can watch this 45 minute doco on Stan.

Winning the Best Short Documentary prize at this year's Academy Awards, this short doco has been dubbed as the film everybody needs to see, woman or man. And at just 26 minutes in length, there's no excuse not to.

Director Rayka Zehtabchi takes us to rural India, where the topic of menstruation is still a taboo. The village welcomes a machine that stocks low-cost, biodegradable sanitary pads and the effect on the personal, financial and economic lives of the women is overwhelming.

Period. End of Sentence. is topical, feminist and thought-provoking, and it'll be the best half hour you make for yourself this weekend. Watch it on Netflix now.

What are you favourite documentaries and docuseries? Tell us in a comment below.