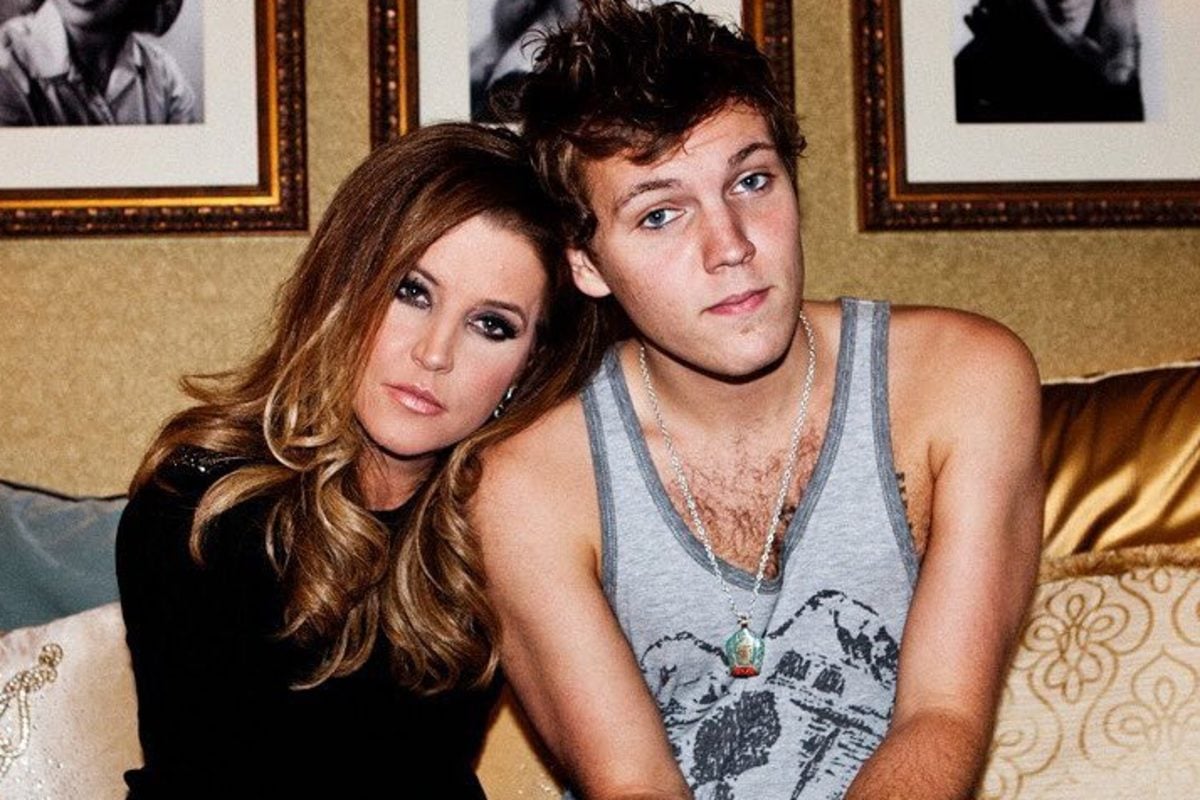 Benjamin Keough, the son of Lisa Marie Presley, has died at the age of 27.

Benjamin, who is the grandson of Elvis Presley, died on Sunday in Calabasas, California, from an apparent suicide.

In a statement provided to media, a representative for Lisa Marie said she was "beyond devastated" over her son's sudden death.

"She is completely heartbroken, inconsolable and beyond devastated but trying to stay strong for her 11-year-old twins and her oldest daughter Riley," the statement read.

"She adored that boy. He was the love of her life."

Benjamin was born to Lisa Marie and her former husband, musician Danny Keough, in 1992. He was the second child for the couple who welcomed daughter Riley, now an actress, in 1989.

As a teenager, Benjamin reportedly signed a deal with Universal Music for $5 million. He never released any music commercially.

Over the years, fans and family alike have commented on Benjamin's likeness to his late grandfather, Elvis Presley.

"Ben does look so much like Elvis," Lisa Marie said in an interview.

"He was at the Opry and was the quiet storm behind the stage. Everybody turned around and looked when he was over there. Everybody was grabbing him for a photo because it is just uncanny."

Here's what we know about the life of Benjamin Keough and the wider Presley family.

Benjamin Keough's grandfather, Elvis Presley, was born to Vernon and Gladys Presley in a two-room house in Mississippi on January 8, 1935.

At 13 years old, Elvis and his parents, who were virtually dirt-poor, moved to Memphis, Tennessee. It was here that the King of Rock and Roll's musical career would begin. 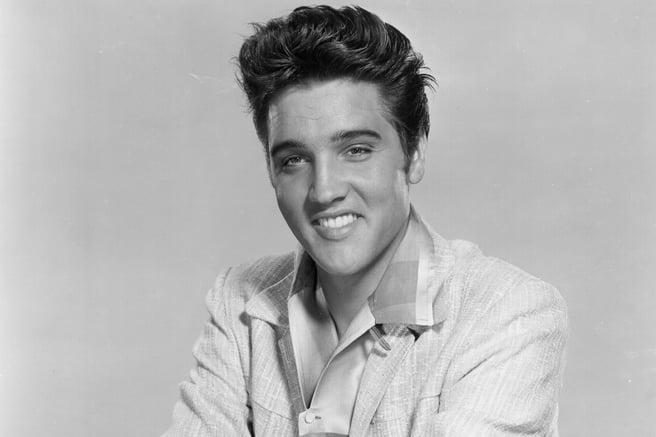 In 1954, after years of being influenced by pop, country and gospel music of the time, Elvis began his singing career with the Sun Records label in Memphis, before his recording contract was sold to RCA Victor in 1955.

By 1956, a mere two years later, Elvis was an international superstar.

The performer's career first skyrocketed when his single, 'Heartbreak Hotel', was released in January 1956, becoming a number-one hit in the United States.

From 1956 to 1958, Elvis virtually dominated the charts, ushering in the age of rock and roll and influencing the likes of artists such as The Beatles, Johnny Cash, and Little Richard.

After he was drafted in the US Army for two years in 1958, Elvis returned to churning out countless hits and a series of more than 30 films.

As the years went on, however, the movie and record sales began to fall.

On May 1, 1967, Elvis married actress Priscilla Beaulieu in Las Vegas. The couple welcomed their only child, daughter Lisa Marie, in 1968, before divorcing in 1973.

In the final years of his life, the performer divided his time between touring and spending time at his Memphis estate, Graceland. His health was also in major decline from years of drug misuse and a diet of greasy, fried food. 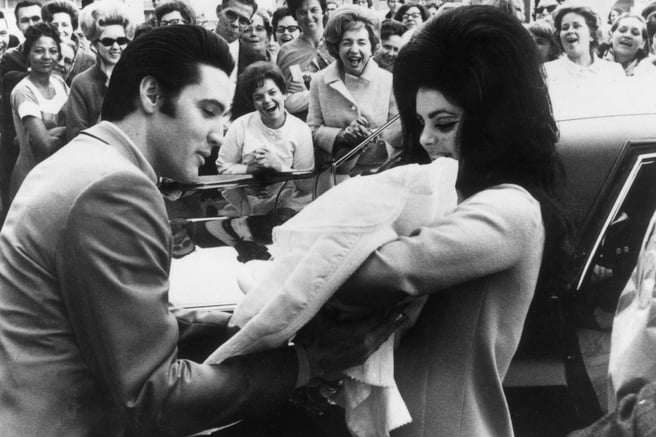 Elvis and Priscilla Presley with their daughter, Lisa Marie, in 1968. Image: Getty.

According to journalist Tony Scherman, by early 1977, "Presley had become a grotesque caricature of his sleek, energetic former self. Hugely overweight, his mind dulled by the pharmacopia he daily ingested, he was barely able to pull himself through his abbreviated concerts."

In mid-1977, one night before he was due to begin another tour, Elvis died of a heart attack at Graceland. He was 42 years old.

Lisa Marie Presley was the only child of Elvis and Priscilla Presley.

After her parents divorced, Lisa Marie lived with her mother. When Elvis passed away in 1977, Lisa Marie was just nine years old.

In 1993, on her 25th birthday, Lisa Marie became the sole heir to her father's estate, which had grown to an estimated $100 million. (In 2018 court documents, Lisa Marie alleged that her former business manager had whittled her large fortune down to just US$14,000.)

A decade later, in 2003, Lisa Marie released her debut album, To Whom It May Concern.

Over the course of her life, Lisa Marie, now 52, has married four times. 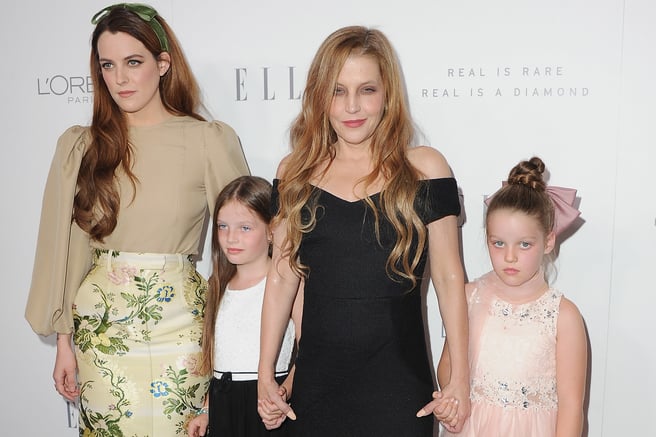 Riley Keough and Lisa Marie Presley with her twin daughters in 2017. Image: Getty.

While the pair divorced in 1994, they have remained close friends.

"I don't know how, but we've managed to stay close... There are others that I have pain or betrayal associated with that I won't have anything to do with. But he and I had a special thing. Unconditional," she said in an interview.

READ: "It all seemed so set up." Inside the claims Michael Jackson 'faked sex' with Lisa Marie Presley.

When the couple’s relationship went public with Jackson kissing Lisa Marie on stage at the 1994 MTV Video Music Awards, the pair’s union was dubbed by many as "The Marriage of the Century".

"I am very much in love with Michael, I dedicate my life to being his wife," Presley said in a statement confirming their marriage.

"I understand and support him. We both look forward to raising a family and living happy, healthy lives together. We hope friends and fans will understand and respect our privacy." 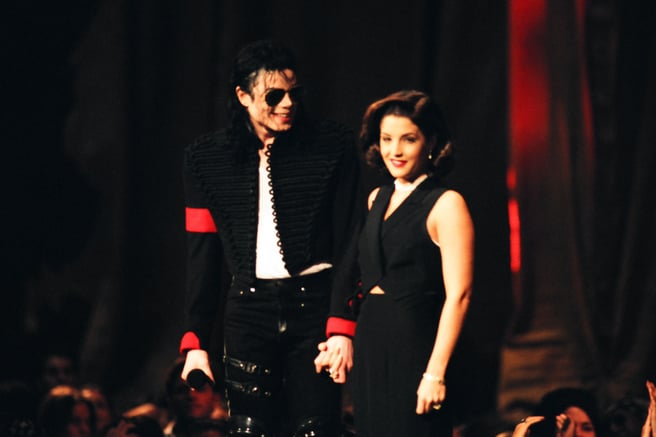 "I believed he didn't do anything wrong, and that he was wrongly accused and, yes, I started falling for him. I wanted to save him. I felt that I could do it," she later said.

After two years of marriage, Lisa Marie filed for divorce in early 1996, citing irreconcilable differences. It was later claimed that Lisa Marie and her children "rarely" stayed in the same house as Jackson during their marriage.

Speaking in an interview in 2017, Riley Keough opened up about her late stepfather, Jackson.

"I loved him," she told The New York Times Magazine.

In August 2002, Lisa Marie married actor Nicolas Cage, who she met at a party. In November that same year, the actor filed for divorce.

She later married for a fourth time in 2006 to Michael Lockwood, her music producer, who she later divorced after a decade in 2016.

In June 2019, Lisa Marie shared a rare photo alongside her four children.

"Mama lion with cubs," the musician captioned the post.

Riley Keough, the eldest daughter of Lisa Marie, is an emerging actress and model.

She has appeared in a number of films including It Comes at Night, Mad Max: Fury Road, Logan Lucky, and Under the Silver Lake.

In 2016, she earned a Golden Globe Award nomination for Best Performance by an Actress in a Limited Series or Motion Picture Made for Television for her role in the first season of the anthology series The Girlfriend Experience.

While Riley has become a prominent figure in the entertainment industry, her younger brother Benjamin largely avoided the spotlight.