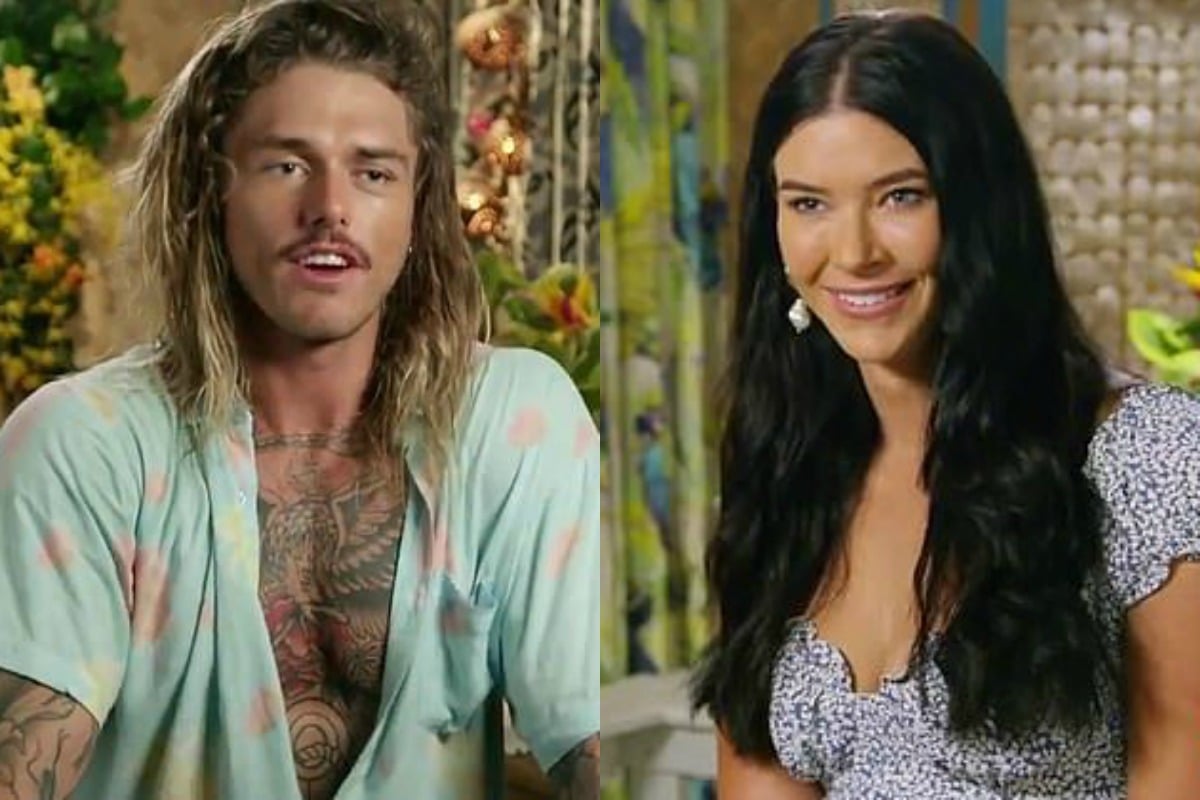 1. Oh. There's evidence that Bachelor in Paradise's Timm doesn't end up with Brittany.

In some very sad news, it looks like Bachelor in Paradise's Timm Hanly and Br﻿ittany Hockley don't end up together after all.

In pictures shared by the Daily Mail, Timm was photographed walking around the streets of Melbourne with another woman who is quite clearly... not Brittany. (You can take a sneaky peek at the photos here).

The pair seem quite close, and were even pictured sharing a kiss and a hug.

The news comes days after a fan reportedly spotted Timm and Brittany out and about in Melbourne.

"Just so you know, I walked past Timm and Brittany walking down Chapel Street in Melbourne the other night (pre second round of iso lockdown) looking very cuddly," the fan wrote in a private message to the BachieFunny Instagram account. ﻿﻿

Looks like there may be one legit couple to come outta Paradise? Good spot @helena.gum_ela 🧐 #bachelorinparadiseau

It looks like we'll have to wait and see what happens with Timm and Britt when Bachelor in Paradise returns tonight at 7.30pm on Channel 10.

Listen to The Spill, Mamamia's daily entertainment podcast. In this episode, Kee Reece and Kelly McCarren chat about The Parent Trap's 22 year anniversary. Post continues below.

2. "It could be Jerry Springer!" Sonia Kruger on tonight's Big Brother live finale.

It's finally happening. After six weeks of watching strangers live, sleep and compete on national TV, the latest season of Big Brother is coming to an end.

Sophie Budack, Chad Hurst and Daniel Gorringe are the final three contestants competing to receive the most public votes during tonight's live finale.

Speaking to Nova's Fitzy & Wippa earlier today, host Sonia Kruger says she's both nervous and excited to see what will happen when all the contestants reunite.

"What makes me nervous is when I try to project and I think what could happen tonight," she told the radio hosts.

"It could be all the housemates back, it's a lovely reunion it's all a big love fest – boring. Or, it could be Jerry Springer! So what I'm aiming for is something in the middle."

Sonia also explained that it's been difficult to get the contestants back to Sydney due to COVID-19 travel restrictions.

"In Victoria we could see there were issues occurring in terms of lockdown so we got Sarah [McDougal] and Daniel [Gorringe] out and they have been here for two weeks quarantine and doing all that," she said.

3. Yikes. The Bachelor in Paradise cast have responded to last night's epic drama.

Last night, Ciarran Stott's secret to end all secrets was revealed in the last moments of Bachelor in Paradise, and if the dinner party was no indication, it has torn apart the cast... even those who are yet to appear on the show.

In case you missed it, Ciarran came face-to-face with his recent ex, Renee Barrett, during last night's episode.

In summary, Renee claimed that Ciarran suddenly left the Bachelor mansion during Angie Kent's season because he wanted to rekindle his relationship with her.

Since the episode aired, cast members have stepped forward with their thoughts.

The first comment came from soon-to-be intruder, Keira Maguire, who wrote: "I actually feel for you, Ciarran."

"All I’m saying is it’s not fair to bring outside drama onto a show. It doesn’t sit well with me, to be honest."

Instagram account Bachie Funny were quick to capture the interaction, suggesting that Kiera is probably #TeamCiarran because Renee is roommates with her ex, Jarrod Woodgate's new girlfriend, Sam Royce.

Could Keira taking Ciarran's side have anything to do with Renee living with Jarrod's girlfriend Sam and them all being best mates? #bachelorinparadiseau

Renee then added fuel to the fire by commenting, "Yep hahaha".

It was at this point that Jamie Doran jumped in to have his say, commenting: "Wow! @keiramaguire supporting everyone who’s NOT the victim. Jog on."

Sarah Ferguson has shared a tribute to her daughter Princess Beatrice online after she married her fiance Edoardo Mapelli Mozzi last Friday.

"Thank you to all the very special and kind people that took the time and trouble to send amazingly caring and supportive messages," she wrote to her nearly 300,000 Instagram followers.

"Never has a mother been more proud than the wedding of Eugenie and Jack, and again with my Beatrice’s loving wedding to Dear Edo. I am so lucky with my girls, and now the best sons-in-law," she added.

The caption was posted alongside a quote, which read: "Happiness cannot be travelled to, earned, worn or consumed. Happiness is the spiritual experience of living every minute with love, grace, and gratitude."

Thank you to all the very special and kind people that took the time and trouble to send amazingly caring and supportive messages ... never has a mother been more proud than the wedding of Eugenie and Jack, and again with my Beatrice’s loving wedding to Dear Edo. I am so lucky with my girls, and now the best sons-in-law

The royal couple only had around 20 of their closest friends and family in attendance, including Queen Elizabeth, Prince Philip and Beatrice's parents, Prince Andrew and Sarah, Duchess of York.

It's reportedly the first 'secret' royal wedding in over 200 years.

"The private wedding ceremony of Princess Beatrice and Mr Edoardo Mapelli Mozzi took place at 11am on Friday 17th July at The Royal Chapel of All Saints at Royal Lodge, Windsor," Buckingham Palace confirmed in a statement.

"The small ceremony was attended by the Queen, the Duke of Edinburgh and close family. The wedding took place in accordance with all relevant government guidelines."

5. "What the hell did I just watch?" The best reactions to the epic Bachelor in Paradise drama.

Good morning to everyone except Ciarran Stott.

Yes, we're still shook at the revelation on last night's Bachelor in Paradise that our British ex-boyfriend lied to Angie Kent but also to AUSTRALIA by remaining in touch with his ex Renee Barrett while in The Bachelorette mansion. 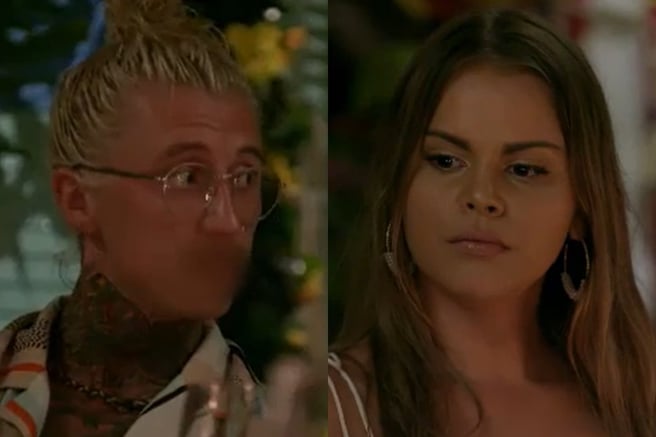 She said Ciarran called her to say he was done with the show and wanted to give their relationship another go. She even picked him up from the airport after he returned to Darwin, having left the mansion in an emotional goodbye following a family death.

HOW CAN WE EVER TRUST AGAIN?

While we spend our Wednesday distracted by heartbreak and awaiting the fallout from such scorching tea on tonight's episode, here are the best reactions to the moment we realised we had all been deceived by a man with a penchant for grapes and leopard print neck ties.

Ciarran: OMG I CAN'T BELIEVE MY EX WHO EVERYONE HAS BEEN TALKING ABOUT IS ABOUT TO APPEAR ON THIS SALACIOUS REALITY TV SHOW I WISH I'D HAD MORE TIME FOR MY ALIBI #BachelorInParadiseAU

Jess: "I just don't know why Renee has come to #BachelorInParadiseAU."

Mate it's because producers offered her a free trip to Fiji pic.twitter.com/0j78LCA5y2

saying nothing and instead sipping wine when a boy tries talking shit to you? big mood. #BachelorInParadiseAU pic.twitter.com/996O6RHkn7

For more reactions to the Bachelor in Paradise drama, read our earlier article here.