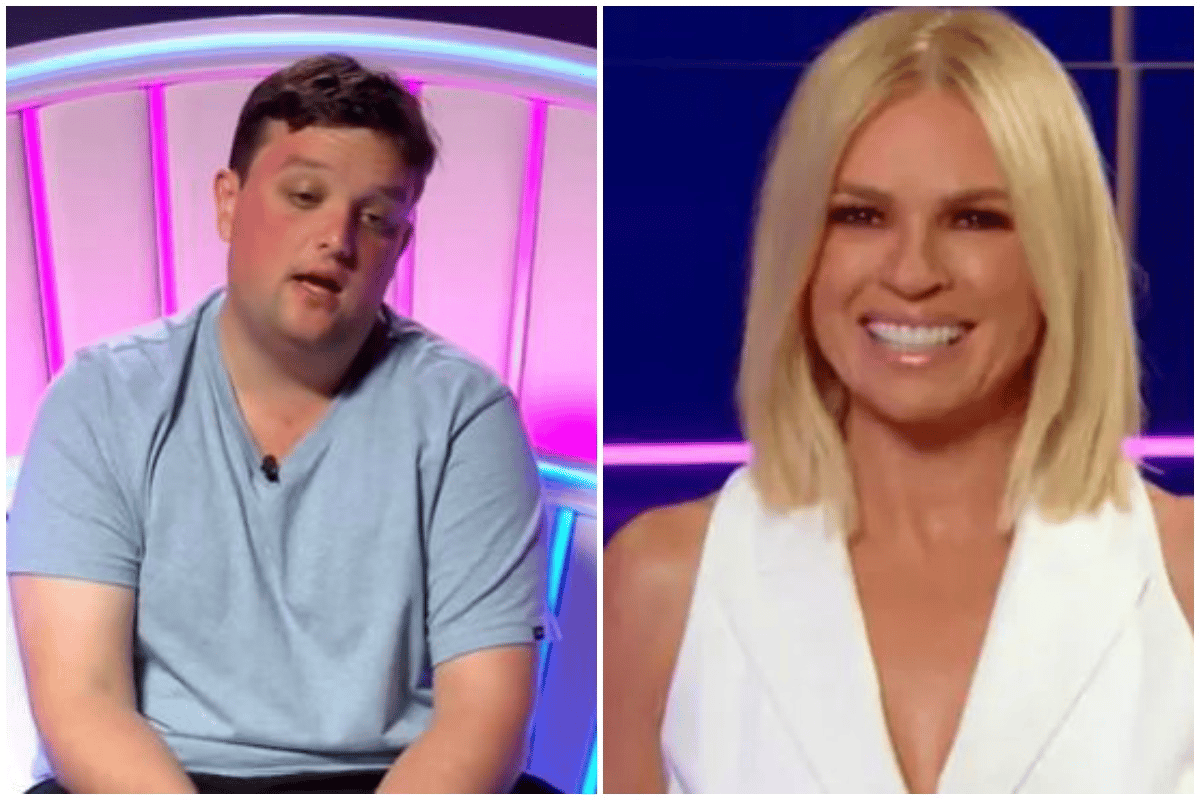 When I switched on the season premiere of Big Brother Australia on Monday night, I was full of pure, unbridled excitement.

And relatedly Tully but also Layla and Tim and MERLIN and most importantly, Drew’s face? 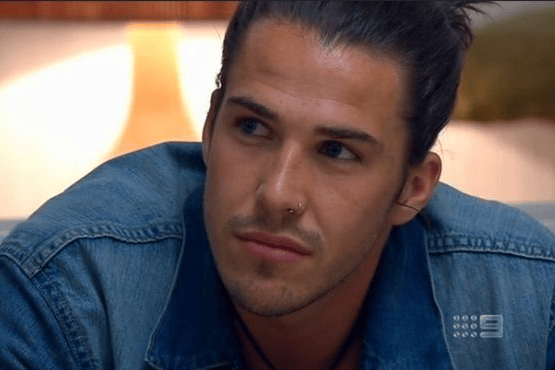 I really thought this revamped version of the reality show where a group of strangers literally sit in a house together with nothing to do could be the saving grace of 2020.

As a country, we’re desperately in need of non-threatening drama that happens behind a TV screen rather than to us, personally.

But instead, on last night’s much-anticipated premiere, we got a never-ending whinge about tea and a man who snores.

For nearly two hours, I waited for something, anything to… happen. A set of twins pretending to be one person, perhaps. Or two random contestants having to behave as though they're a long-term couple. When Big Brother (whose voice now sounds like a British demon which seems unnecessary) asked Kieran to come to the diary room, I thought maybe this was it. Considering it's 2020, my imagination ran wild about what the twist might be. Humans that are actually robots, a Bird Box-type scenario where there are monsters outside that you can't be exposed to, a contestant who's a really famous person in disguise, ANYTHING.

Big Brother's message for Kieran, however, appears to have been written by an eight-year-old who was asked to design a (terrible) game. Kieran's challenge was to give every contestant a high five, then a nickname, then a... back massage.

Just for context, Netflix recently released a show masterpiece called Too Hot To Handle where a group of really attractive strangers went into a house thinking they were going to have lots of hot sex, only to find out sex and all related activities were banned.

Now THAT is a twist.

We watched as Kieran successfully completed the challenge no one cared about, and then moved on to the next drama which was that a woman named Talia thought that perhaps fellow contestant Daniel didn't like her that much. Spoiler alert: he thinks she's... fine.

The next hour was a blur of Angela arguing with Big Brother about ownership of the house (??), before complaining about the lack of tea, then Daniel snoring and people wondering whether a person's unconscious nasal behaviour is enough grounds to evict them from a reality show.

Watch: The trailer for this season of Big Brother. Post continues after video.

In the end, a woman named Laura went home, mostly because she demanded that people clean up after themselves and also held the expectation that grown adults should be able to cook.

After taking some time to digest exactly what... aired on Monday night, I've identified exactly why this revamped version of Big Brother was never going to work. Importantly, most of the problems aren't anyone's fault. They're just sad realities, that make the year 2020 even more tragic.

People being locked down in a house isn't that... interesting anymore

I don’t mean to minimise the plight of the housemates who have spent a few weeks locked down in a house in Manly, but, um, we’ve literally all been there. Like, as a globe.

Most people on the planet have lived in lockdown for some portion of the last three months, so watching a group of strangers live exclusively in one house without being able to leave isn’t… a novelty. That was just me in April???? And also May??

Since the last season of Big Brother Australia, we've also had several other iterations of shows where strangers live together and are filmed 24/7. Franchises like Love Island, The Bachelor, The Bachelorette, Bachelor in Paradise, and Married at First Sight took the concept of strangers + cameras and added important plot points such as romance and sex and tragic, unrequited love. Now, Big Brother is like Love Island but with no bikinis, no guarantee of people hooking up and no fire pit.

Obviously there were barriers (i.e. a global pandemic) to Big Brother being live-recorded like it was in previous seasons. But without live evictions, audience voting and a live audience, it's not even remotely the same.

The concept of the show was always that contestants nominate each other and 'Australia' (AKA 700 teenagers using the credit on their mum's phone) choose who they want to stay. Now, housemates get evicted by each other, which is simply not the point.

The inevitable result of this new format is that anyone annoying/inflammatory gets voted out, and people who are just... fine, get to stay.

If last night is anything to go by, the housemates end up making elimination decisions based on sh*t no one cares about.

Okay, that’s why we’re watching though???

Or: Dan snores and keeps everyone awake.

But that means you’ll all be sleep-deprived and get snarky with each other by day three?? So obviously he should stay??

THE BEST CONTESTANTS ARE ALWAYS THE ONES EVERYONE HATES. THAT'S THE RULES.

You're meant to watch a ditsy blonde get nominated for six weeks in a row because she keeps breaking the dishwasher, and then clap excitedly when the audience continues to keep her in. It's called tension and conflict and it's the goddamn crux of reality television.

There was also an eviction on the first night which was strange and particularly unexciting, given it wasn't even a little bit live. When Laura left, my only reaction was, 'oh. It's sad for you that you got kicked out of a show two months ago by people I don't know for reasons I don't fully understand. Nice to... meet you.'

One of the things that made Big Brother super petty was that no one was allowed to talk openly about who they nominated. It made contestants paranoid and it meant that no alliances could be formed, allowing for nominations (and the reasons behind them) to remain, as previously stated, petty.

Now people are full strategising? Like what? Is this Survivor?

It turns out that listening to strangers talk about who they will and won't nominate for eviction (when they're in a warm, cosy house, and not starving on a deserted island) doesn't make for very compelling television.

On a related note, whatever happened to giving people POINTS?! For example, I nominate Samantha for three points for farting in her sleep, and Joel for two points for cheating on me. Then some people are allocated more points to nominate with depending on whether they win challenges and EUGH someone hire me to produce this show I remember everything from 2014.

We're not here for physical challenges

This is not Survivor, and it is also not I'm a Celebrity, Get Me Out Of Here.

So why did I spend my Monday night watching a swing challenge? We don’t know who any of you are and we certainly don’t care who is the best at placing a ball on a thing while swinging.

That's only interesting when a) it's tennis tantrum-thrower, Bernard Tomic, doing the challenge, or b) everyone's covered in dirt and hasn't brushed their teeth or washed for a week, and have gone crazy to the point where the stakes suddenly seem absurdly high.

Maybe this season just needs some time to warm up. Maybe the twist is coming (it's definitely not coming because we got ads about Kieran's SECRET CHALLENGE for days leading up to the premiere).

But perhaps the problem is that Big Brother is just too safe in 2020. Years of exponential reality TV trashiness (just months ago on MAFS, David put ACTUAL HUMAN POO on Hayley's toothbrush I just need everyone to remember that) has desensitised us to the perviness of spying on strangers living together.

It's no longer enough.

And honestly, that is nothing short of a tragedy.

Reply
Upvote
I think the fact that it isn't live any more is the biggest killer here. Public voting and live eliminations were a way of getting people invested in the show. Viewers would have favourites, and ones they hated, they felt part of the process. Now, there's no connection. Plus, as you mentioned, it's time has kind of been and gone, reality tv has moved on.
J
james b 2 years ago