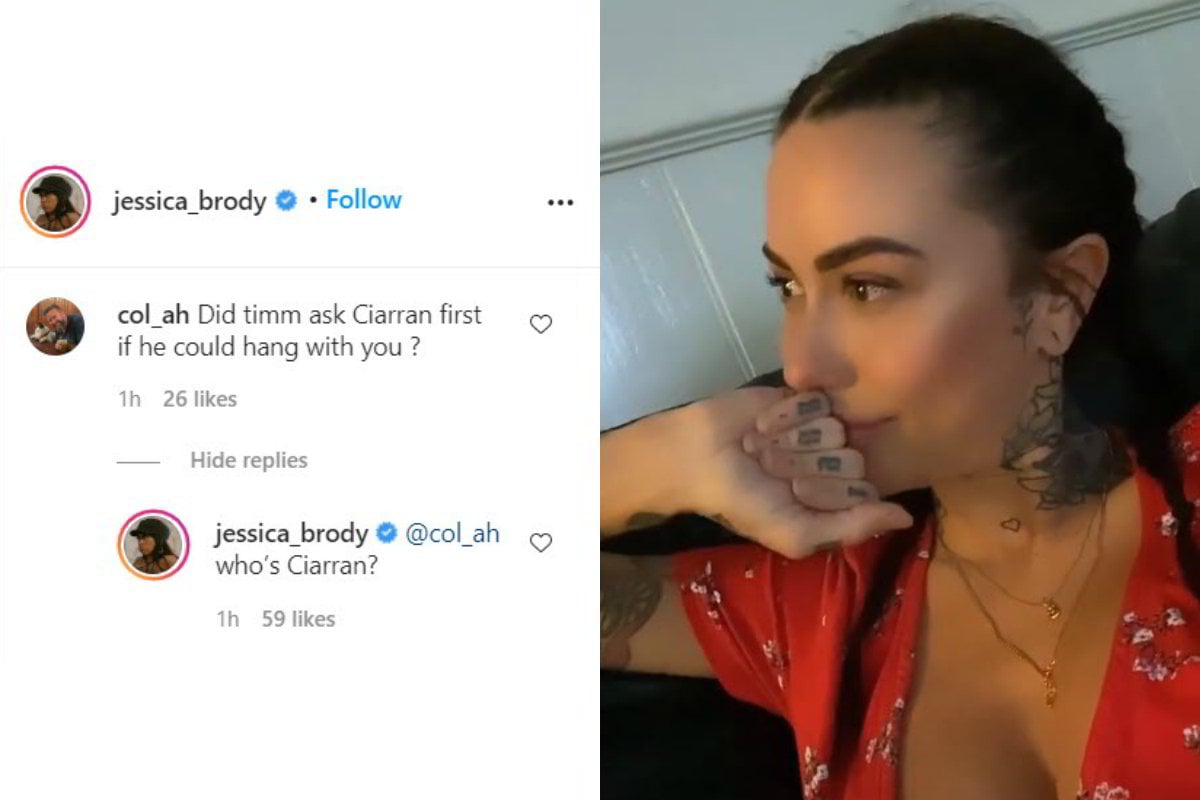 Oh no, the Bachelor in Paradise cast have gone fully rogue and are airing all their drama openly on social media.

Many are sticking it to the producers over the show's editing or calling each other's behaviours out and... we can't look away.

Some are so mad about it all, they're taken to spoiling to outcome of the show and... we hope they read their contract first. Oh and speaking of contracts, Jamie is suing Channel 10.

Confused? Same, but we've rounded up all their grievances into this 'Handy Guide to Angry Bachelor in Paradise Stars'.

On Thursday night, Jess Brody posted her reactions in a series of Instagram stories after watching recent episodes which showed the 'bro code' drama between Ciarran and Timm, and Matt, who went on a date with Renee, Ciarran's ex-girlfriend.

"Renee owned her shit and she went in there for the right reasons. She went there to find love. She is entitled to go on those dates. She doesn't need to ask for anyone's f*cking permission. She doesn't belong to anyone, and she was never his property and never will be his property."

She said the upcoming episode, which teases a fight between Ciarran and Matt, looks "juicy", but "getting into this whole fisticuffs situation over someone hooking up with your ex when you're on a dating show with your ex... Bro, grow up, just f*cking chill with the testosterone, bring it down a level, go to therapy".

She said her castmates should be accountable for their actions, apologise and learn from their mistakes.

Speaking on Nova Podcast The Babble, Jess said she had expected an apology from Ciarran after watching the series, but he hasn't responded to her message.

"Honestly I think he is struggling at the moment. I'm quite surprised that I still haven't receive an apology or, especially since airing because we had remain friends until it aired, those last two episode that I was in," she explained.

"And I was like 'Oh, I'm not going to allow myself to be disrespected like that.' I didn't realise how badly I was being disrespected behind my back and that was the point where I actually reached out to him other day and said 'I'm 100 per cent here for you if you need someone. I don't want you to feel like you're struggling alone, because I am here for you, but I need to step back from our friendship as well because I need to heal'. At this point in time him and I aren't [talking]... and he read the message and he didn't reply.."

She said she believed Ciarran needed to "understand himself better".

"I don't think he even knows where these emotions are coming from. I think there's a lot of repressed emotions there and they come out in different ways…. and I mean, I could go on a rant about therapy and why everybody should go to therapy, but I just think that it's a situation where he's struggling with the repercussions of his actions.

"He went in there and he just he was like 'Stuff that, I'm going to be myself, I'm just going to have a good time. I'm going to be this larrikin, this lad and this boys trip being filmed, boys will be boys'. But at the end of the day, that does have repercussions and now he is struggling to have the backlash from that, I guess, with the Australian public."

Finally, we must applaud Jess for giving us the best social interaction of the season:

So it looks like Keira Maguire won't be finding love in Fiji.

Following a particularly villainous edit of the 29-year-old in an earlier episode, Keira posted a series of photos criticising the show's producers, topping it off with a photo captioned: "Also, I don't need the show to find love..."

This revealed her new relationship with Love Island's Matthew Zukowski. 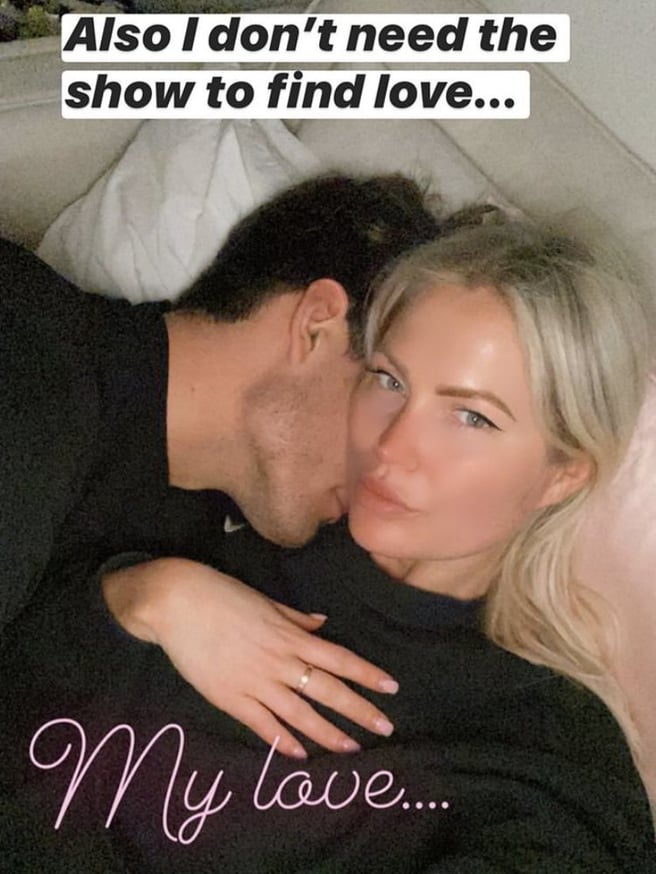 "I'm done being silent... They've taken it too far this time," she wrote, adding "The real villains are the people that are behind the show creating their own narrative, and not caring AT ALL whose lives they destroy to get viewers."

Cass Mamone shared a snippet of footage from the show, where she says in a voiceover: "Jackson is talking to Brittney... I think Jackson can do better than Brittney".

Cass claimed editors had put together a bunch of different sentences said in different contexts to create the line, which didn't actually come out of her mouth. 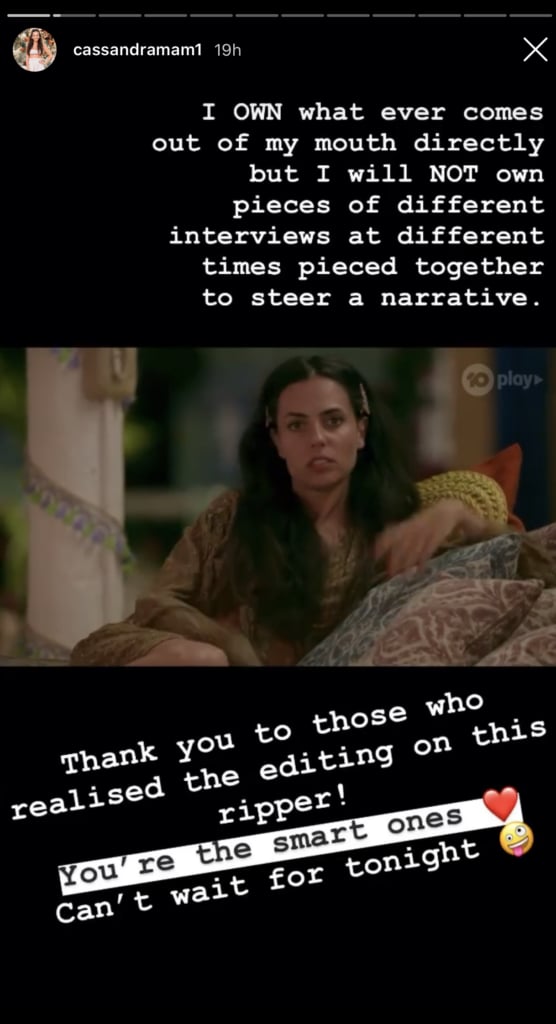 "I OWN what ever comes out of my mouth directly but I will NOT own pieces of different interviews at different times pieced together to steer a narrative," she wrote.

She later shared a clip from fictional show UnREAL, about reality TV producers, which shows them slicing together things said by a contestant to sound like a sledge.

Okay, so Niranga had some things to say about Cass' claims and... oh goodness, this is more awkward than their date.

A tale of he said, she said #bachelorinparadiseau

He also called out "one particular" castmate in an Instagram story, and it isn't hard to work out who he is talking about. 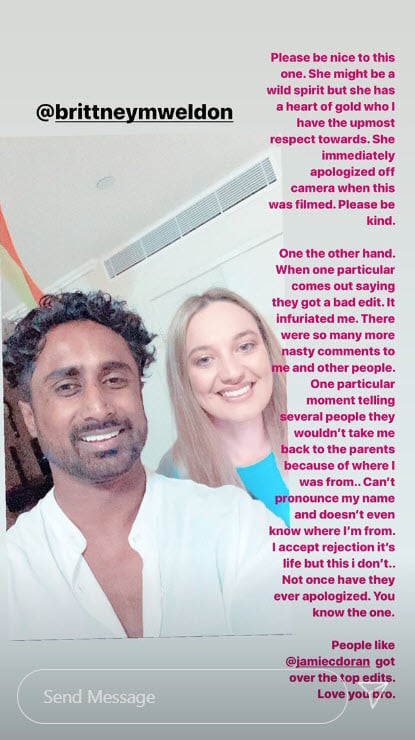 Niranga said he was "infuriated" by a co-star complaining about getting a "bad edit" on screen because apparently "there were so many more nasty comments" made to him and others that didn't make it to air.

"One particular moment telling several people they wouldn't take me back to the parents because of where I was from," Niranga, who moved to Australia from Sri Lanka when he was three, said.

He added this person could not "pronounce my name and doesn't even know where I'm from".

(And Renee's best friend, Sam, the queen of tea this season).

Matt and Renee have been busy getting in some very good digs at Ciarran on Instagram, but they're also out here offering their opinions on editing.

“BRO CODE” a mate I grew up with or a brother.... not a guy I met on TV that I’ve known for 3 months #slytherin #bachelorinparadise

In response to claims by Keira and Cass, Matt wrote "We all know what we signed up for, just own whatever you look like".

In a response to a fan asking about bullying, Renee said "People who do that and blame 'editing' are not being accountable for the things that THEY have said". 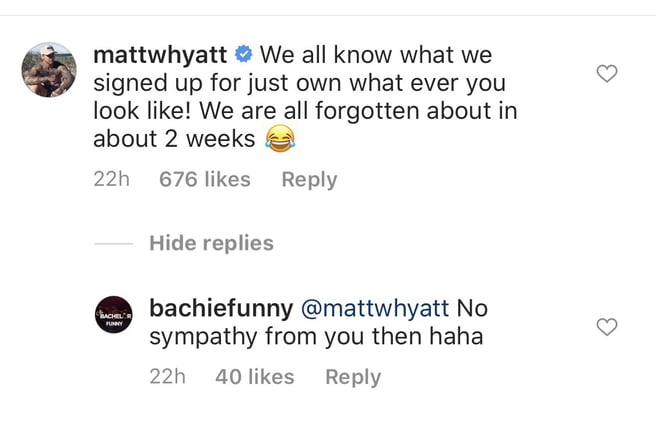 Sam - who is now dating Keira's ex Jarrod Woodgate - wrote people can learn a lot from their mistakes if they "aren't busy denying them". Oof. 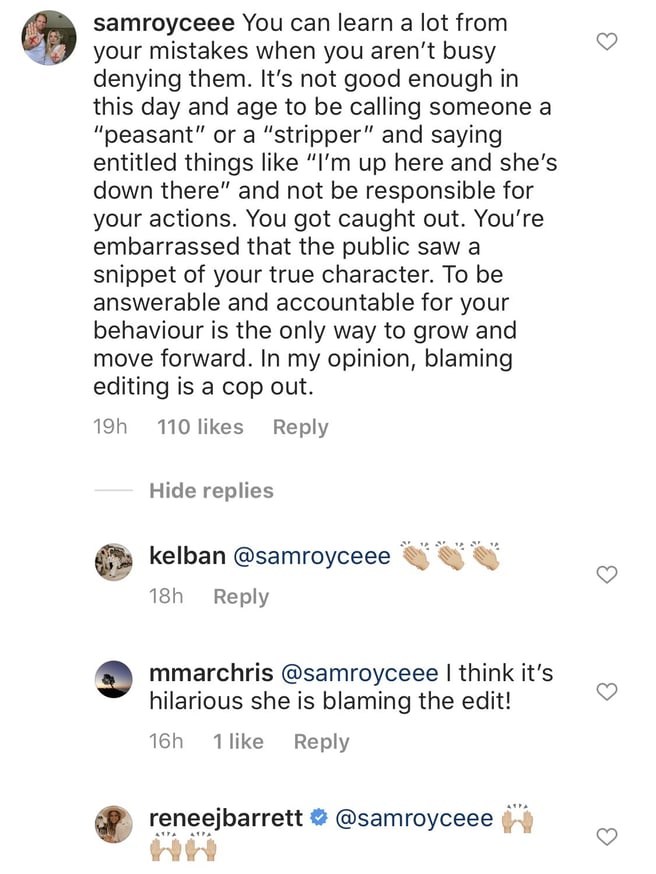 "It's not good enough in this day and age to be calling someone a 'peasant' or a 'stripper' and saying entitled things like 'I'm up here and she's down there' and not be responsible for your actions," she said, referring to a video of deleted scenes where Keira talked to Jamie about Alisha.

"You got caught out. You're embarrassed that the public saw a snippet of your true character. To be answerable and accountable for your behaviour is the only way to grow and move forward.

"In my opinion, blaming editing is a cop out."

No, just kidding, Glenn is a sweet angel who isn't involved in any drama, but there was no where else we could point out that he changed his Instagram name to Greg.

"This is not the news I wanted to post, but I feel I owe this to at least my family, friends, and also fans of The Bachelorette and Bachelor in Paradise," he wrote.

Jamie added that he's not going to make any further comments about the situation.

He later updated his caption in reference to bible verse 1 Samuel 17:45, about the story of David vs. Goliath, which reads: "David said to the Philistine, 'You come against me with sword and spear and javelin, but I come against you in the name of the Lord Almighty, the God of the armies of Israel, whom you have defied.'"

He also shared the statement on his Instagram stories, tagging both Warner Bros Television Production Australia and Network Ten, and later announced he had hired the lawyer that represented MAFS' Nasser Sultan in his winning defamation case against the Daily Telegraph.

Okay, so the drama off-screen is officially better than the drama on-screen. What on earth will next week bring?