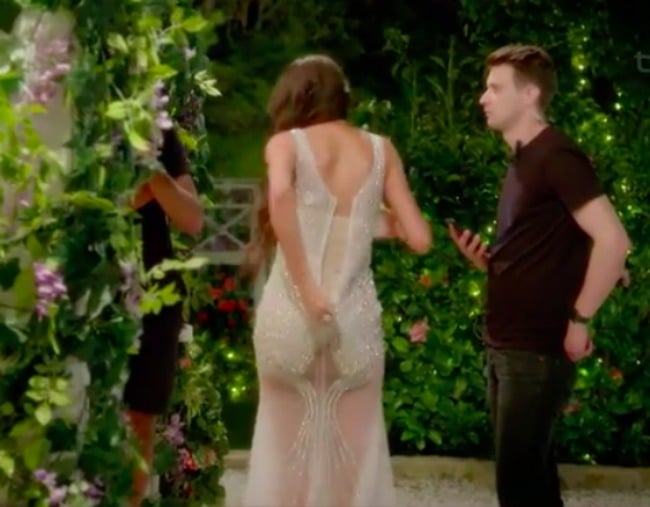 1. Fans think they’ve worked out the identity of the woman who goes rogue on The Bachelor this week, demanding to leave the mansion.

The promos for the next episode of The Bachelor Australia look dramatic to say the least.

As the intruders enter the Bachie mansion on Wednesday night, one contestant in particular goes completely rogue, demanding to leave the show.

“Get those f*cking cameras away from me,” the brunette contestant yells.

But although it’s not clear who the contestant is, according to the Daily Mail, it’s likely the mystery contestant is new intruder Brittany Weldon.

The former nursing student is set to enter the mansion on Wednesday night alongside model Jamie-Lee Dayz and dental nurse Deanne Salvemini.

With Jamie-Lee on crutches in the show (she injured herself hours into filming) and Deanne having much shorter hair than the woman shown in the trailer, it seems Brittany might really be the contestant who demands to leave.

2. A paparazzo has made a truly bizarre statement about Jasmine Yarbrough’s upcoming wedding day.

Jasmine Yarbrough and Karl Stefanovic are set to marry in Mexico in December – but one paparazzo has made some truly bizarre comments about the couple's big day.

You see, Yarbrough recently shared a photo on Instagram suggesting she was in New York, when really, she was making a stop in Mexico for final wedding preparations. It was a classic famous person move - to throw paparazzi off.

But one photographer who spoke to the Sydney Morning Herald, and sounds a little frustrated to have been outsmarted, decided to throw shade at the 34-year-old.

"The only reason this wedding is of interest is because of Karl and his many celebrity friends," the photographer said, suggesting that photos of Yarbrough alone don't hold a lot of value.

"Jasmine doesn't cut it on her own."

Considering that a quick Google search returns plenty of photos of Yarbrough without her partner, we'll agree to disagree with the anonymous photographer.

3. Why Lady Gaga got a ten minute standing ovation at Venice Film Festival.

While Lady Gaga is mostly known as a singer and songwriter, the now 32-year-old was acting long before she was ever known for her music.

Now, in her largest role to date, she's being widely praised for what's been described as a "brilliant" performance that shows she's a "force to be reckoned with" in the entertainment industry.

When A Star is Born premiered at Venice Film Festival on Friday, it reportedly received a 10 minute standing ovation. The film is Bradley Cooper's directorial debut, and stars Cooper as Jackson Maine, an established singer-songwriter, and Lady Gaga as Ally, an unknown singer-songwriter. The chemistry between them, according to reviews, is "electrifying".

Video: Film critic Peter Bradshaw from The @Guardian praises 'A Star Is Born': "Its absolutely brilliant, its an incredible sugar rush of weepy euphoria and could pinch the entire festival and walk off as the best film there." :star2: pic.twitter.com/WucAAWWItf

They're calling the film A STAR IS BORN but my sources in Tinseltown tell me that it could have been called A DIRECTOR IS BORN: Bradley Cooper is the baby's given name, but this February he may go by the name...Oscar

The film will be released in Australian cinemas from October 4, 2018.

4. The taunts about his weight that truly disturbed Robbie Williams.

The wife of singer Robbie Williams, Ayda Field, says she's banned her partner from social media after she started to worry cruel comments would impact his mental health.

Field told The Mail on Sunday that Williams sometimes 'seeks out' negative stories, particularly those about his appearance and weight.

"He goes down the hole and then I have to pick up those pieces," she said.

"Robbie comes across as arrogant and cocky, but inside he’s a little mushy mensch and he has very soft feelings and a wounded heart. When people write bad things about him it hurts."

Smile even on rainy days :umbrella_with_rain_drops:

The Mail reports that Williams is particularly affected by comments about his weight - such as that he's a "fat old dancer".

He has previously spoken about his experiences with depression and his inclination to "sabotage everything" when he's left to his own devices.

5. Love Island's Eden and Erin have officially broken up and WHY DOES THIS KEEP HAPPENING.

But also, hand us the popcorn, because yet another reality television couple has announced their split.

Erin Barnett and Eden Dally are no longer together after their three month relationship that blossomed on Channel Nine’s reality dating show, Love Island.

Though the show is called LOVE Island, their love is apparently no more, as evident via their Instagram posts announcing the news.

We wanted to share with you, that after much deliberation, we have quietly parted ways. We look back and cherish the time we have spent together, the memories we have created, in both Spain and in Australia. We can’t thank each and everyone of you enough, for the support and love you have shown us, but we have to be honest within ourselves as we realise that our forever as a couple, is no longer. We look forward to supporting each other moving forward and remain best friends. Love Erin & Eden

“We wanted to share with you, that after much deliberation, we have quietly parted ways,” the post read.

“We look back and cherish the time we have spent together, the memories we have created, in both Spain and in Australia,” it continued.

“We can’t thank each and everyone of you enough, for the support and love you have shown us, but we have to be honest within ourselves as we realise that our forever as a couple, is no longer.

“We look forward to supporting each other moving forward and remain best friends.”

Yes, I’m sure that Jasmine will be heartbroken that some guy thinks she not worthy of being followed around by random guys with cameras, trying to take unflattering photos of her, to be sold to magazines to publish alongside their made up stories.