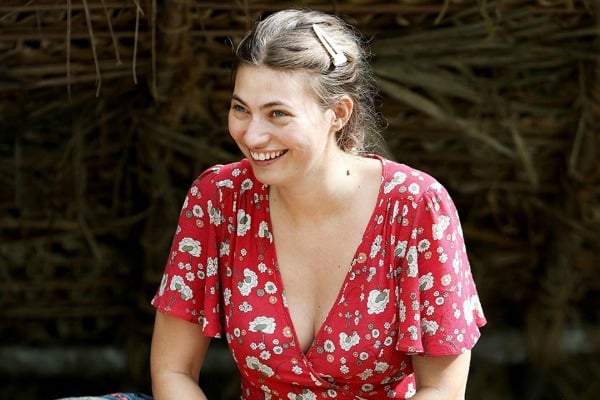 On Tuesday night, wearing her trademark red floral dress, Shonee Fairfax was voted out of Australian Survivor All Stars.

It was a moment that surprised (and upset) thousands of viewers and fans of the Queen of Australian Survivor.

But despite the look on Shonee’s face during tribal council, the personal assistant wasn’t exactly surprised by her elimination.

You can watch a snippet of Survivor contestant Shonee’s facial trick in the video below. Post continues after video.

“I wouldn’t say I was shocked. But I knew that it would be me over AK,” Shonee told Mamamia.

“And Sharn doesn’t really have the best track record for sticking to what she says.”

During last night’s episode, Sharn promised to vote alongside Shonee, Brooke and AK, in the hopes of eliminating David from the competition.

In the end, however, Sharn flipped on her decision, choosing to vote for Shonee instead.

“I had no other option but to put my trust in Sharn,” Shonee said.

“I kept thinking of it from her perspective and I thought it was the smartest move to get Dave out,” she added.

On Season 3 of Australian Survivor: Champions v Contenders in 2018, Shonee, who made it to the top four, was well known for her social game as she charmed her way into the good graces of her tribe.

This time around at All Stars, Shonee thinks she played an even better game.

“I think I played an amazing game,” she told Mamamia.

“I feel like I was so much more ballsy this time. I didn’t let anyone tell me what to do. I always did what I wanted to do, no matter what.

“I really wanted to just go in there and make myself proud and I definitely did that.”

Despite having a strong social game and high levels of endurance in the challenges, Shonee was constantly underestimated by both the viewers and her fellow contestants on Australian Survivor.

“I definitely think the female players are underestimated,” she said.

“Look how shocked everyone was when I won the first individual immunity. They were so shocked.”

For Shonee, the hardest part of All Stars was dealing with contestants who were predominately focused on “keeping the tribe strong”.

“I really didn’t think I’d hear that in All Stars,” she admitted.

“I thought people would be more strategic. It was definitely a struggle when they were saying things like, ‘Let’s keep the tribe strong’, when you don’t actually have the physical muscle [to be considered as strong].”

Unlike Champions v Contenders, Shonee was surprised by the tight alliances held among the All Stars contestants, especially after the merge between the two tribes.

“I was expecting to do more of a voting block type thing where you just have one person that you actually trust but all the groups and alliances kept moving around,” she said.

“I definitely wasn’t expecting on All Stars for everybody to be saying things like, ‘This is such a loyal game’.”

In total, Shonee was in the competition for 42 days. Between challenges and tribal councils, however, there isn’t a whole lot to do to keep yourself entertained.

“To pass the time, I did a lot of interpretative dance with Brooke. We would jump over some palm fronds. Anything. You’ve really just got to try and entertain yourself for a lot of the time. There’s a lot of talking and a lot of dancing. A lot of scheming,” Shonee said.

The personal assistant, who often shares her skincare and makeup advice on Instagram, tried to maintain a skincare routine on the show – and she even got the other contestants involved.

In an un-aired clip from the series, Shonee can be seen teaching Harry all about his skin’s barrier and why hydration is king. She also showed Zach the power of exfoliation. On the island, that looks like rubbing some wet sand on your face.

“It’s definitely possible to keep a skincare routine on Survivor. You can use a bit of sand. You can use some fresh water. You can pluck [eyebrow] hairs with your fingers. You just have to make the most out of a bad situation,” Shonee told Mamamia.

“When I was on Vakama, I was always doing Brooke and Flick’s hair and Jacqui was always getting her eyebrows done by me.”

As for meals and sleeping arrangements on Survivor, it’s not exactly… great. But according to Shonne, you get used to it eventually.

“You literally just eat rice and beans every day and maybe some coconut if you can find it. That’s about it,” she said.

“If you cook three times a day, you get three small handfuls of rice each,” she added.

“As for sleeping outdoors, you just get used to it. I missed my silk pillowcase, but it’s what you’ve gotta do when you want half a million dollars.”

Although Shonee missed her family during All Stars, she was pretty content with having a break from her phone.

“I missed them so much. You’re just wondering every day, I wonder what my mum is doing or what my husband is doing. I was thinking about them a lot.

“It was actually really nice though to have a digital detox and not be on my phone for hours of the day.”

Following her elimination, Shonee hopes to see someone from her alliance win All Stars.

“I would love to see one of the underdogs, AK or Brooke, take this home,” she said.