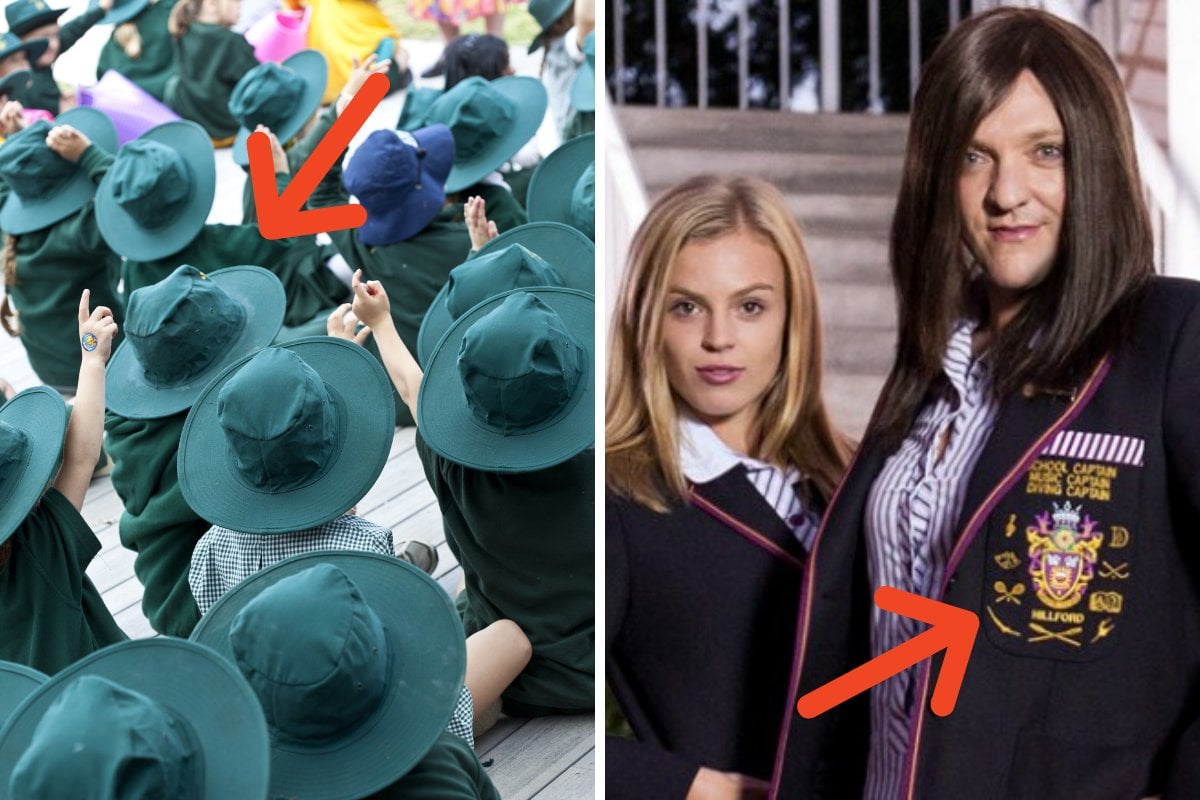 When you first arrive in Australia, there are a LOT of confronting things you have to tackle head on: Snakes, spiders, semi-mythical drop bears, blistering heat, bush fires and whether or not "Yeah Nah" means 'yes' or, confusingly, 'no'.

And this chaos keeps you pretty occupied for the first couple years in Australia, but then your eyes start to open to slightly more nuanced strangeness.

Watch: Three types of parents at the school pick up. Post continues after video.

Yes, I have never physically been inside an Aussie school (primary or secondary - and I know those are the British categories but I genuinely don't understand the sections here so you'll have to roll with me), so these following judgements are made entirely based on conversations I've had that made me abruptly go, "PARDON?".

But there are so, so, so many elements of Australian schools that make absolutely no sense to an expat. And I must talk about them. Immediately.

Are there any chairs in Australian schools?

Whether it's piping hot and the ground is burn-worthy or it's freezing cold, kids have to plonk themselves down on the outdoor ground to eat their lunch. Which, when it is extremely chilly, an ass-to-cold-ground situation can apparently lead to hemorrhoids. So, this is some sort of medical torture, no?

Apparently, often there are no chairs for assemblies either, so multiple ground-dwelling sessions are enforced upon the little ones.

I've never noticed in the federal budget that there's a 'big push' to put 'more chairs in schools', but frankly, I think there needs to be.

Quick! Have a listen to this episode of Mamamia Outloud, where Jessie, Mia and Holly discuss why boys need to brunch with girls ASAP. Post continues after podcast.

What on earth goes on at a 'tuck shop'?

Tuck shops honestly just confuse the f**k out of me.

On paper, it sounds like a sweet shop or a glorified vending machine, which kind of makes sense to me... until hot pies join the conversation.

As an avid pie-fan I'm thrilled that Australian kids are exposed to this delicacy early on in their education, but is it not a meal?!

The tuck shop seems to be this hybrid cafeteria-cum-petrol-station that random mums have authority over on a rolling schedule. It also 'delivers meals' to kids who forgot their packed lunch, but these 'meals' may also be jatz with vegemite.

Honestly, I need a dedicated office space and a small research team to figure out what the hell is going on here.

Australian school children dress like they're off for a jolly outing in England... in the 1920s.

Somewhere in the sartorial development of this nation, school uniforms got stuck.

While everyone else seemed to move onto t-shirts, polos and, I don't know, elastic waistbands - Australian school kids (particularly of the private school variety) have remained in a fashion time-capsule.

The first time I was catching the train into the city (taking the north shore line and rolling past a few thousand private school stops) kids were joining the carriage by the bucket load, and I genuinely thought it was a themed dress up day. Like a 'come dressed as your favourite Victorian era child' situation - because that was the only way my brain could justify someone wearing knee-high socks with shorts and a boater hat.

Don't agree with me? Focus your peepers on this very telling side by side: 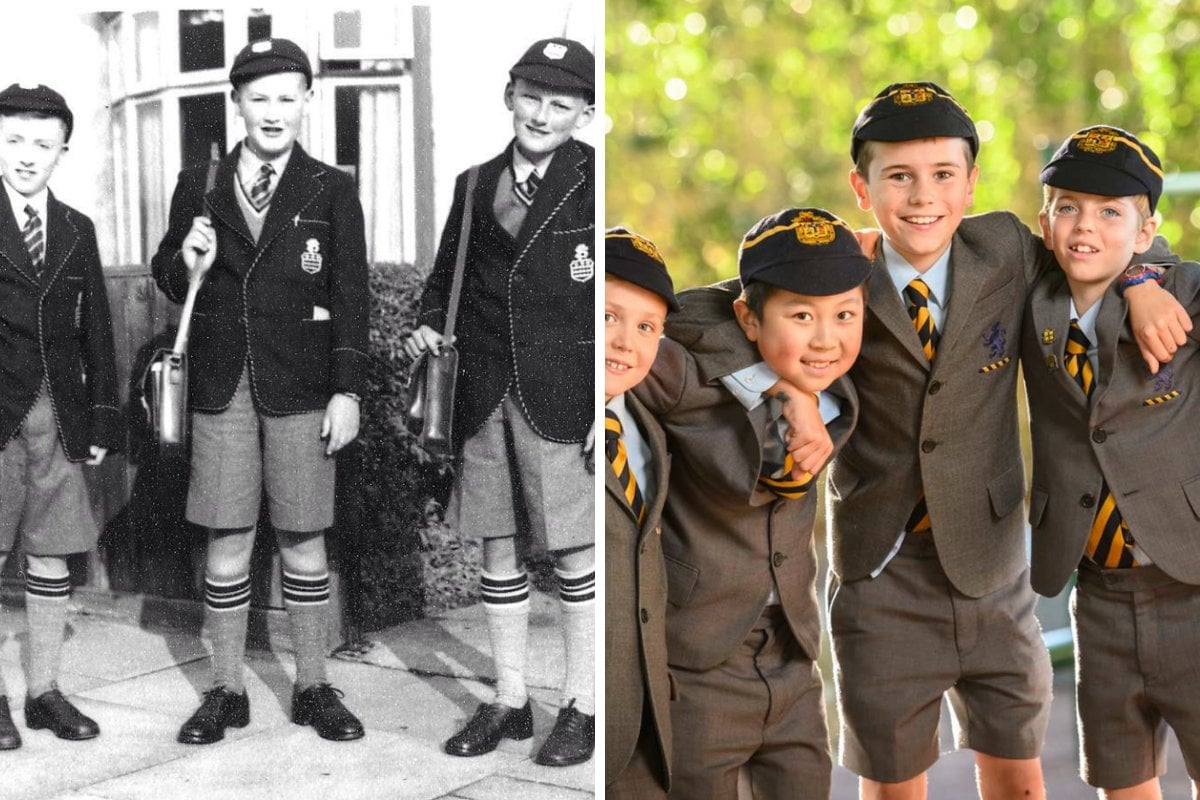 The most feared rule of all: 'No hat, no play'.

Whilst we're on the topic of hats...

The rule of 'no hat, no play' makes total sense with sun safety and trying to enforce those good habits early on, but the idea of reducing a three-year-old to tears because they forgot to pack their hat on a drizzly grey day and now they have to stand on the sideline and shamefully watch their friends play seems aggressively cruel.

Also, why are there no spare hats?! Surely the 'lost property box' could come in handy during these trying times?

The ATAR is akin to the Hunger Games. And I shan't be told otherwise.

When I first arrived in Australia and started university here, I was working on a project with my mate she stated, "Isn't it nice that we can actually work together and I don't have to hide my notes from you?"

This was when I found out all about the ATAR and how it makes you ruthlessly competitive with your classmates, rival schools and basically the entire state. You see, in the UK (where I'm from), we simply study for our subjects, submit coursework, take an exam and get a grade for all that work. That is our grade. And it doesn't matter what Sally from your English class got, or the results the school up the road got. It's your grade, and that's that.

Apparently here you have to see your mates as the enemy and play a game of strategy more complicated than the Enigma Code when picking your subjects and school to ensure you're giving yourself the best chance to boost your rating.

Reflecting on myself aged 15, I'm pretty sure the hardest decision I had to make was whether or not I was going to crimp my hair - so this whole gambling and strategising of your future seems... quite impossible.

To be honest, I'm concerned that this is only the tip of the iceberg when it comes to weird s**t that Australian schools do and classify as 'normal', so please feel free to confuse me further in the comments.

All my baffled best,

Sign up to Mamamia Teachers Newsletter.Community, connection and inspiration, beyond the classroom. Straight to your inbox every month.
*By signing up you accept our privacy policy

Reply
Upvote
Another weird thing was just how much private schools where obsessed with uniform to the point if your shirt became untucked or you had nail polish on you'd be sent outside?? Like for the whole lesson?? So you can't learn?
Like isn't that the whole point 😂
J
jess_dorahy 5 months ago