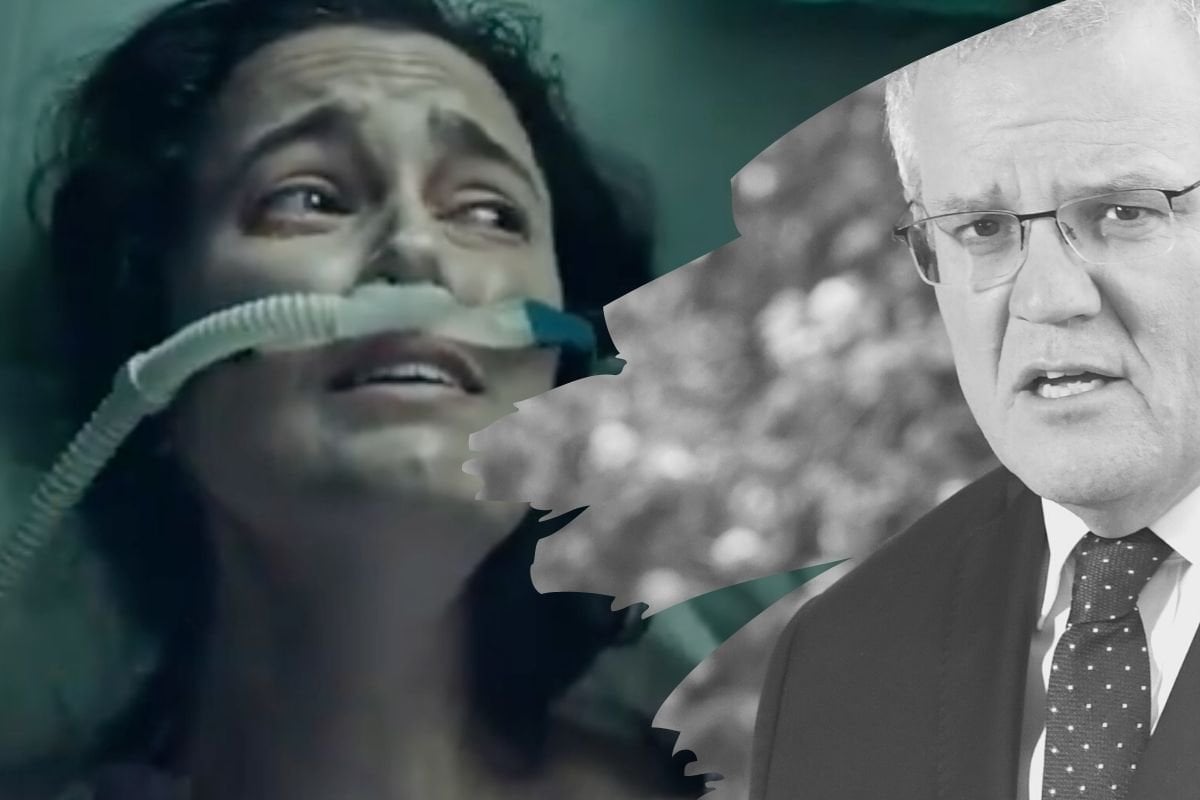 The advertisement, which will be played on Sydney TV screens this week, starts with a warning: "The following video is a representation of severe COVID-19 illness. Some viewers may find the video distressing."

A young woman appears gasping in a hospital bed with tubes up her nose.

She looks like she could be in her 20s, possibly her 30s. But definitely no older than that.

The 30 second clip shows the woman hyperventilating as she looks down the camera lense with pleading eyes.

"COVID-19 can affect anyone. Stay Home. Get Tested. Book your vaccination," the text on the screen tells us.

You can watch it below. Post continues after video.

If only we could.

You see that woman who is most certainly under 40, is not yet eligible for the preferred vaccine for her age group. Provided she doesn't have any medical conditions or exemptions that bump her up the list, she'll be waiting months to be next in line.

Sure, she can get the AstraZeneca jab, after Prime Minister Scott Morrison made a knee jerk decision two weeks ago to make it available to everyone. But that's not a decision that's approved by the Australian Technical Advisory Group on Immunisation (ATAGI) and a myriad of other medical professionals.

It hasn't stopped plenty of under 40s rolling up their sleeves, but plenty more are waiting for the vaccine they are supposed to get. Is this ad supposed to make them feel guilty for that? It's not their fault they have to choose the riskier option.

Chief Medical Officer Paul Kelly says the Australian government commissioned the ad because of the intensifying outbreak in NSW.

"We are only doing this because of the situation in Sydney and it will be running in Sydney. It is quite graphic, and it is meant to be graphic," he told reporters in Canberra.

But targeting an ad at young Australians solves precisely nothing in a reality where that very age group is still waiting to be able to book their first Pfizer shot.

This is so messed up. Why would you use a young person in your scary ad warning them they could get seriously ill with COVID when young people currently can’t get vaccinated because your own government has monumentally botched the vaccine rollout? What an absolute shambles. https://t.co/rhUhCB5VeZ

The problems with the federal government funded vaccination ad, however, extend beyond the glaringly obvious one that the woman featured isn't even eligible. The advertisement also suggests that the depiction shown is "a representation of severe COVID-19 illness."

In reality, it's much, much worse. And while watching that young woman clearly in distress isn't nice, she's not on a ventilator like four of the 18 people currently fighting the virus in ICU in NSW.

So it's blaming a demographic for not doing something they physically cannot do, and it's medically incorrect... but it's not just that.

The thing I, as a Sydneysider now entering my third week of lockdown am most angry about after watching this ad, is the fear-mongering.

This advertisement is designed to scare us into getting vaccinated. But we don't need any more fear right now, we're already terrified. Locked inside our homes while COVID-19 cancels our plans, halts our incomes, and throws up a dozen new 'hotspots' in our local communities every day. Over the weekend we were told we could be here until the end of August. So trust me when I say, we're already broken.

Just saw the new ad from the federal govt re covid. It seems threatening to me. Us regular folks are doing the right thing. We need our governments to support us, not threaten us. #COVID19nsw

Sure, there are wrongdoers out there. We know NSW Police fined several illegal parties over the weekend, handing out hundreds of infringement notices. But they aren't the majority of the more than a million in lockdown right now. Most of us are holed up in our homes.

It also doesn't help the anti-vaxxer problem. We know conspiracy theories are born out of fear and out of not being able to control the uncontrollable. This ad only fuels their misinformation and unhelpful, dangerous rhetoric.

Holy heck I am over the conspiracy theories and anti-vax sentiment as we battle our way through #coronavirus. Here's 5 arguments against vaccination, and why they're complete and utter bulls**t. Direct it towards your misinformed loved ones.🔬@mamamia https://t.co/Dhtib2PMZV pic.twitter.com/DHZR6YhpEx

The New Zealand vaccine ad focuses on Kiwi's desire to plan weddings without fear and enjoy a traditional hongi greeting.

The British one stars celebrities busting myths about the vaccine.

The American advertisement is all about hope.

Fear might work for smoking advertisements, but you can't copy and paste that technique and think it'll work in this instance.

We in Sydney, the epicentre of Australia's current COVID outbreak, are craving hope right now as we hear that 112 new daily infections have been recorded.

But if you are going to push forward with an ad trying to shock a devastated state into action, at least choose a lead character that can actually pick up the phone and book in the shot they're supposed to have access too.

Reply
Upvote
2 upvotes
It is actually mind boggling that our government would be so stupid and think we are also stupid to be affected by it. They are supposed to lead, offer support  and reassurance not try and scare the pants off everybody. It beggars belief  that they cast a young  woman for the ad, that is unvaccinated, unless she has connections, due to the fact the same government has bungled the vaccination programme. The intellect of the individuals is extremely concerning.
D
daijobou 3 months ago

Reply
Upvote
1 upvotes
I don’t find it scary at all, it just seems staged - a completely healthy actor pretending to have Covid. If they want to target young people the best way is positive messages about the good they are doing by staying at home. When we have lockdowns in Perth our Premier tends to send out quite a lot of messages on social media about how we are all working together to beat this. It helps build a sense of belonging and community which I actually thing the young generations are very much drawn to.
M
mamamia-user-482898552 3 months ago

Reply
Upvote
3 upvotes
@daijobou The "all in this together" message works when communities are not jaded and bleak. It worked in the first waves in Europe, but by the end of 2020 after enduring multiple very hard lock downs, not so much. Western Australia has hardly been affected, so not hard to see how the community there is still fresh and optimistic.
D
daijobou 3 months ago

Reply
Upvote
@mamamia-user-482898552 we have had more lockdowns and stricter border controls than NSW actually. Isn’t this ad targeted to Sydney not Europe?
C
cat 3 months ago

Reply
Upvote
3 upvotes
@daijobou the question is why they would want to target young people when they haven't targeted them with vaccine availability. Young people are not the issue. It's just a transparent attempt by the federal government to blame their usual scapegoats & avoid upsetting their elderly voter base with something that might scare them.
M
mamamia-user-482898552 3 months ago

Reply
Upvote
2 upvotes
@daijobou Given that NSW hasn't borne the brunt of most of the lockdowns in Australia, it's not hard to have had more lock downs than them - and border controls aren't so oppressive if you live in a part of the country you're unlikely to need to cross borders much at the best of times (WA is so far from its eastern cousins, it might as well be its own country). My point is that happy, positive "we're doing great and we're all doing this together" messaging wears off quickly and loses potency after communities grow weary. Europe's experience - as somewhere that has suffered far greater than anywhere in Australia - is just an example of that. Similarly, positive messaging probably won't find its mark in Victoria nowadays as much as it might in Western Australia.