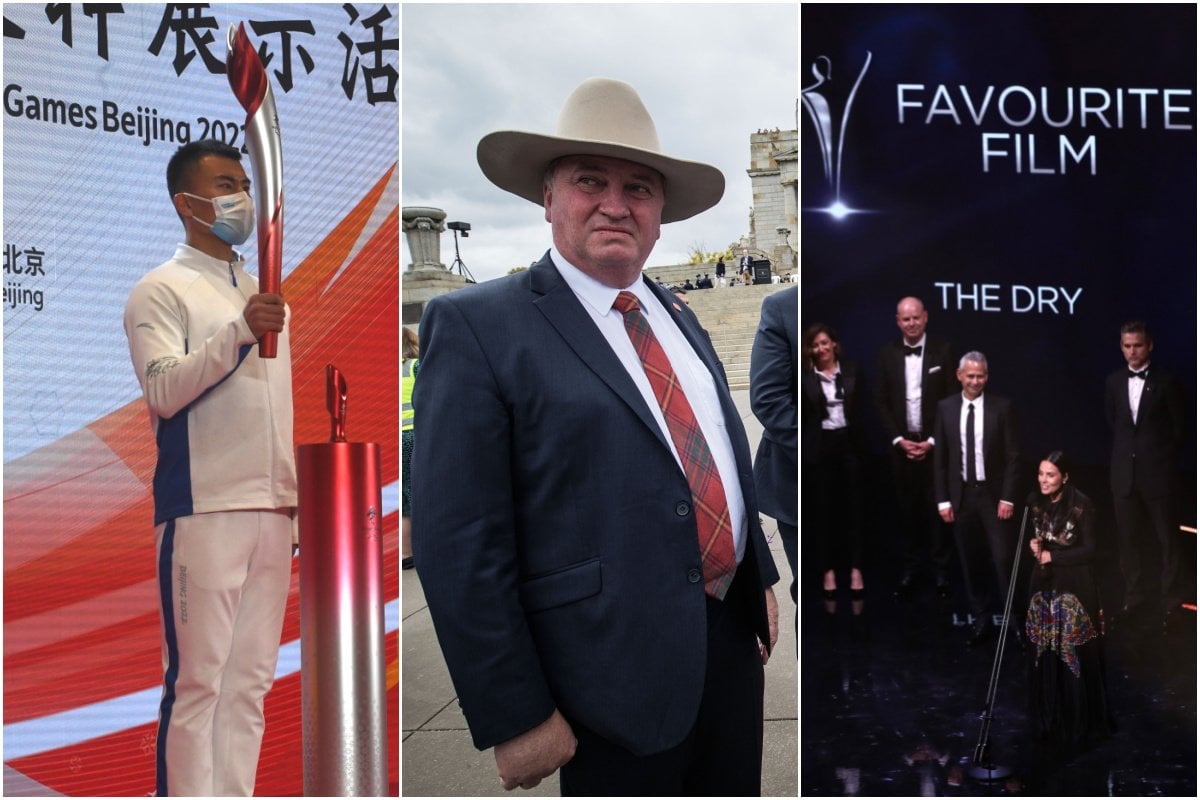 In a statement released this morning, it was confirmed that Joyce would remain in isolation and no other members of his delegation had tested positive.

"My Joyce said he had been experiencing mild symptoms and chose to get tested," the statement read.

Joyce left the country on Friday as part of a mission to drum up support to cub social media companies including Facebook.

The 10-day trip included stops in London and the US, with infrastructure and meetings with counterparts on how to restore the aviation industry after the pandemic also on the agenda.

Canada has joined Australia and Britain in a United States-led diplomatic boycott of the Winter Olympic Games in Beijing, saying it was important to send a clear message over China's human rights record.

The United States has said its government officials would boycott February's Beijing Olympics because of China's human rights "atrocities", weeks after talks aimed at easing tense relations between the world's two largest economies.

China said the United States would "pay a price" for its decision and warned of counter-measures but gave no details, while the International Olympic Committee (IOC) sought to play down the growing diplomatic boycott.

Scott Morrison said his government's decision came because of the country's struggles to re-open diplomatic channels with China to discuss alleged human rights abuses in the far western region of Xinjiang and Beijing's moves against Australian imports.

Announcing the plans, Morrison said Beijing had not responded to several issues raised by Canberra, including the rights abuse accusations.

China has denied any wrongdoing in Xinjiang and said allegations are fabricated.

Its foreign ministry spokesman Wang Wenbin said at a daily briefing in Beijing that Australian politicians were engaged in "political posturing".

"Whether they come or not, nobody cares," he added.

The Australian Olympic Committee said the boycott would have no impact on athletes' preparations for the Games, which run from February 4 to 20, adding that "diplomatic options" were a matter for governments.

A woman has died after her car became submerged in floodwaters in West Brisbane and as a severe storm cell lashed Queensland's southeast.

Emergency services received a report of a sedan being swept off a street and into a nearby creek in Pullenvale as a result of moving floodwaters about 4.40pm on Wednesday.

The body of a 75-year-old Taringa woman, the sole occupant of the car, was recovered.

Flash flooding has turned deadly in Brisbane's west overnight, with a 75-year-old woman's body being found after her car was swept into a creek. #9Today pic.twitter.com/8yTTcbtinb

Thunderstorms look set to elevate concerns over major flooding in central Queensland, the Western Downs and border towns which may not show signs of receding until at least the weekend.

The town of Beaudesert south of Brisbane recorded more than 70mm of rain in the hour to 2pm on Wednesday, inundating roads and houses.

Wet weather is also continuing around NSW, with some areas predicted to receive their monthly average rainfall before the end of the week as heavy falls add to already high rivers.

Heavy rain and strong wind will "set the scene for further flooding and community impacts" particularly on the south coast, BoM meteorologist Jonathan How says.

Pfizer says a booster dose of its COVID-19 vaccine may offer important protection against the new Omicron variant even though the initial two doses appear significantly less effective.

Pfizer and its partner BioNTech said that while two doses may not be protective enough to prevent infection, lab tests showed a booster increased by 25-fold people's levels of virus-fighting antibodies.

Blood samples taken a month after a booster showed people harboured levels of Omicron-neutralising antibodies that were similar to amounts proven protective against earlier variants after two doses.

Scientists don't yet know how big a threat the Omicron variant really is.

Currently the Delta variant is responsible for most of the COVID-19 cases around the world.

But the Omicron variant, discovered late last month, carries an unusually large number of mutations and scientists are racing to learn how easily it spreads, whether it causes illness that is more serious or milder than other coronavirus types - and how much it might evade the protection of prior vaccinations.

Pfizer's findings, announced in a press release, are preliminary and have not yet undergone scientific review.

But they are the first from a vaccine maker examining whether the booster doses that health authorities are urging people to get may indeed make an important difference.

Scientists have speculated that the high jump in antibodies that comes with a third dose of COVID-19 vaccines might be enough to counter any decrease in effectiveness.

A Stan original film about the Port Arthur massacre gunman has won multiple gongs at the 2021 AACTA Awards.

American Caleb Landry Jones on Wednesday won Best Lead Actor in a Film for his portrayal of Martin Bryant, the gunman who carried out the 1996 massacre in southern Tasmania which killed 35 people and injured 23 others.

The film Nitram, which follows the life of Bryant in suburban Australia in the mid-1990s, was also named Best Film from among six nominations including The Dry.

Australian Judy Davis won Best Lead Actress in Film for her role as Bryant's mother and Anthony LaPaglia was named Best Supporting Actor in Film for the same production.

On the small screen, the ABC's The Newsreader took away five awards including Best Drama Series. The Dry won the Audience Choice Award for Favourite Film.

- Australian Open organisers have included Novak Djokovic in the event's main draw entry list, but the Victorian government has reiterated that all players competing in Melbourne must be fully vaccinated against COVID-19. Questions remain over how Djokovic - who refuses to reveal his vaccination status - will be eligible to play.

- The 20-day lockdown in Austria will end this weekend for those who have either been vaccinated or have recovered from COVID-19.

- British Prime Minister Boris Johnson is facing criticism after a video surfaced showing his staff laughing over how to explain a gathering in Downing Street during a COVID lockdown last Christmas when such festivities were banned.

- Golfing legend Tiger Woods will compete in a father-son competition this year, his first since his car crash in February.

- 20 members of Bangladesh's ruling political party have been sentenced to death for beating a university student to death for a social media post criticising a water sharing agreement with India, that sparked nationwide protests more than two years ago.