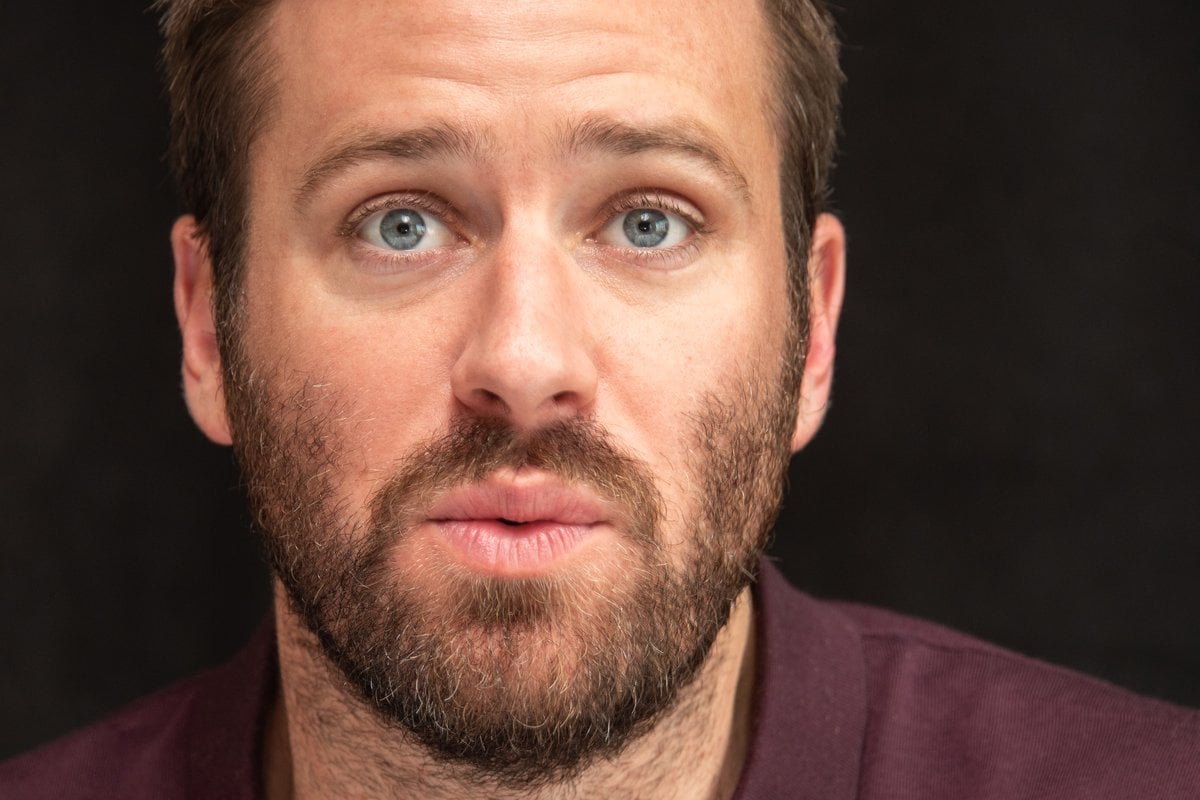 I know you're not meant to say this out loud. But f**k it.

I wish I lost my job in the global pandemic.

No seriously. Why didn't I. Or now. Can someone make me redundant now. I don't need a package or a payout or anything. It's fine. Just fire me and let me escape to the countryside. None of my clients even have any work because it turns out that acting in shit movies filmed on the other side of the world is not an essential service, lol.

But, up until a week ago, there was one client who had a bit of work. Armie Hammer was doing some movie with Jennifer Lopez. Can't remember what it was called. I didn't read the email properly. Sounded boring. I was pretty excited to meet J-Lo though. I like that song she sings about 'Love Don't Cost A Thing'. Anyway, I thought 'Oh, good for him. I'll take my 10 per cent and maybe we can finish the bathroom reno.'

But we shan't ever be finishing the bathroom reno.

Whenever I tell people I represent Armie, they say, 'Who?' and I say 'The guy from Call Me By Your Name' and their eyes light up and they shout, 'TIMOTHEE CHALAMET' and I say 'Nah, the other one' and they either nod or say 'Can't picture him' and then I mutter '...Winklevoss twins' and by that point they're not really listening anymore. 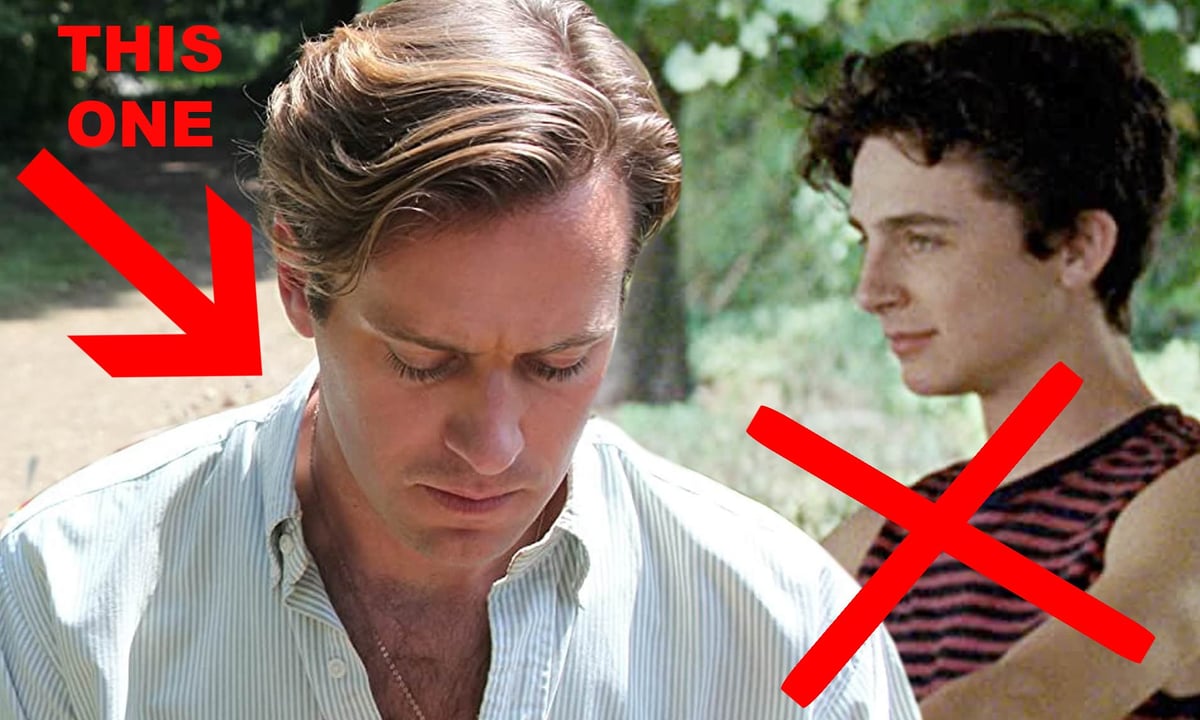 This is my phone background.

Point is, you'd know his face.

Anyway. My year started off pretty well. I wrote down all my goals, aspirations but also my intentions for 2021. I wrote '2021 IS MY YEAR' and then my husband caught me doing yoga in the lounge room and I said, with a confident grin on my face, "New year new me" and then I got into Shavasana and repeated my mantra in silence.

I was journalling. Reading books. Trying to cut down my screen time. Ignoring the weird messages Armie was sending me late at night. 2021 was MY year. 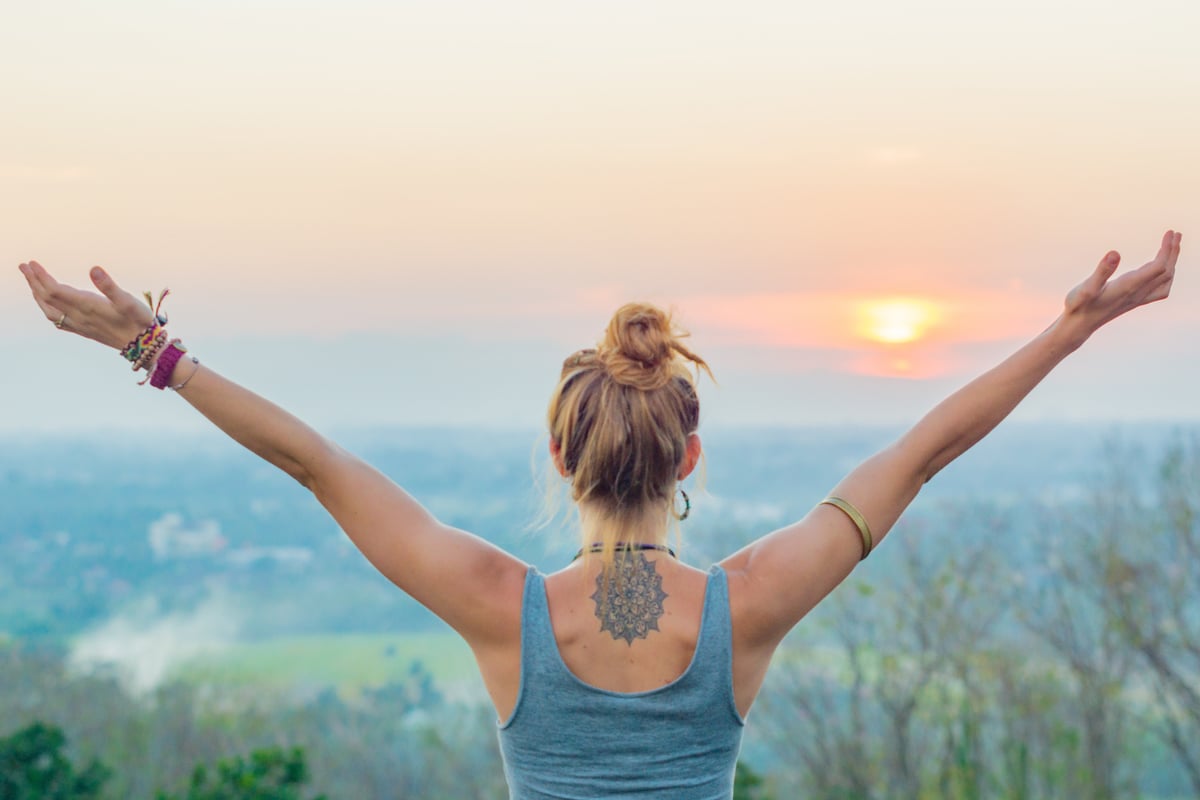 "If I wanted to cut off one of your toes and keep it with me in my pocket so I always had a piece of you in my possession?" 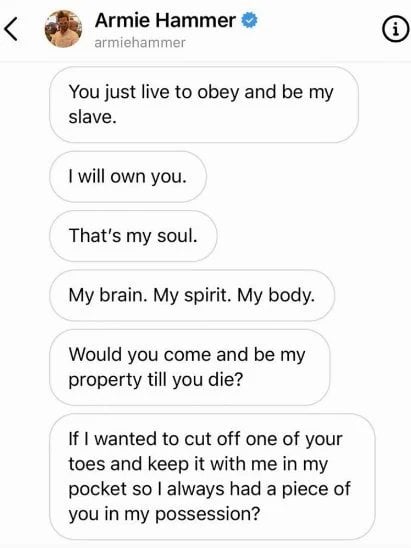 It's the second week of January I haven't even got my inbox down to zero yet and you're going full cannibal?

You see, text messages were leaked. They were allegedly sent by Armie. To a woman he used to be involved with.

I was midway through a really nice dinner, I'd made a pudding for the whole family, and I had to excuse myself momentarily because Armie kept calling.

"I think I may have stuffed up," he said.

At this stage I hadn't read the messages yet.

"What did you do?" I sighed. "Drugs? Affair? Photographed without a mask on? QAnon? Are you one of them? The QAnons?"

"Oh Jesus. You stormed the Capitol didn't you? You were the one with the horns? And the bare chest and the face painting? Dude why. We talked about that being a bad look. I can't have my clients staging an insurrection, it's one of the rules." 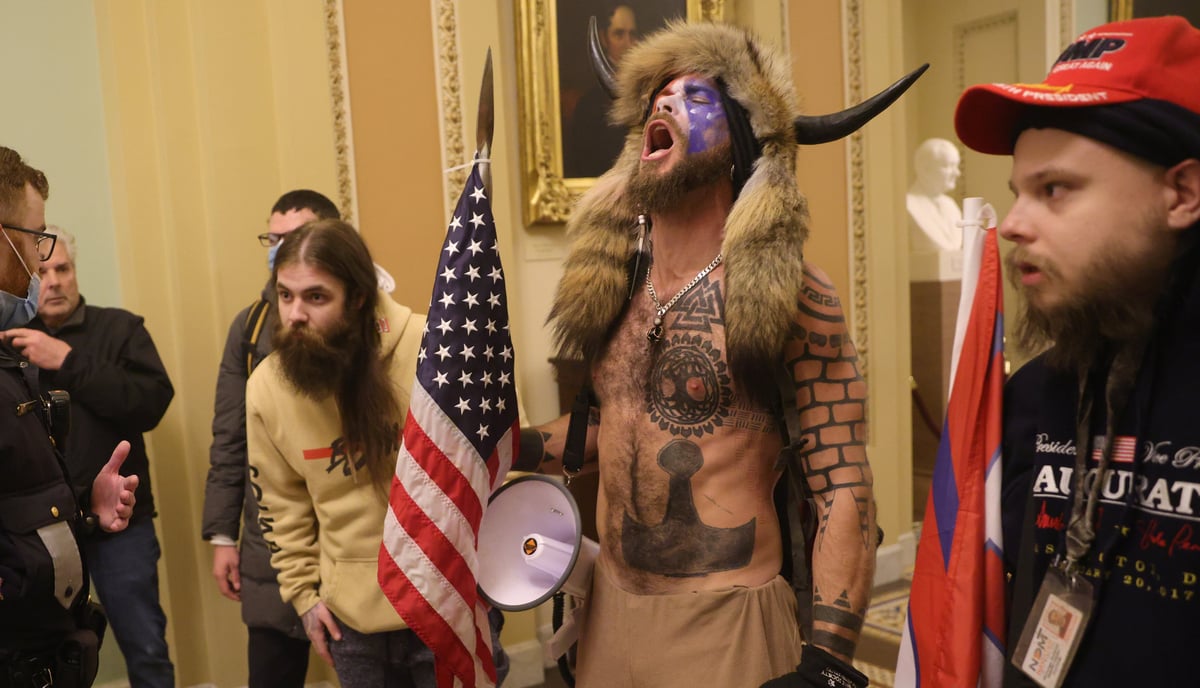 Dis you? Image via Getty.

That's when he told me he'd gone full cannibal.

"Can we play it off as a joke? You didn't mean that you wanted to eat her toes, right?" I asked.

"So there's a message I sent that said..." I heard him click around to find it.

"DUDE WHY. WHO SAYS THAT. I DON'T NEED THIS. I JUST WANTED TO EAT MY PUDDING AND WATCH BRIDGERTON IN BED. Can we play it off as a typo? Maybe you meant to say... you're 100 per cent... Carnivàle? Like the event in Rio? It's probably cultural appropriation and you'll likely be cancelled but it's less bad." 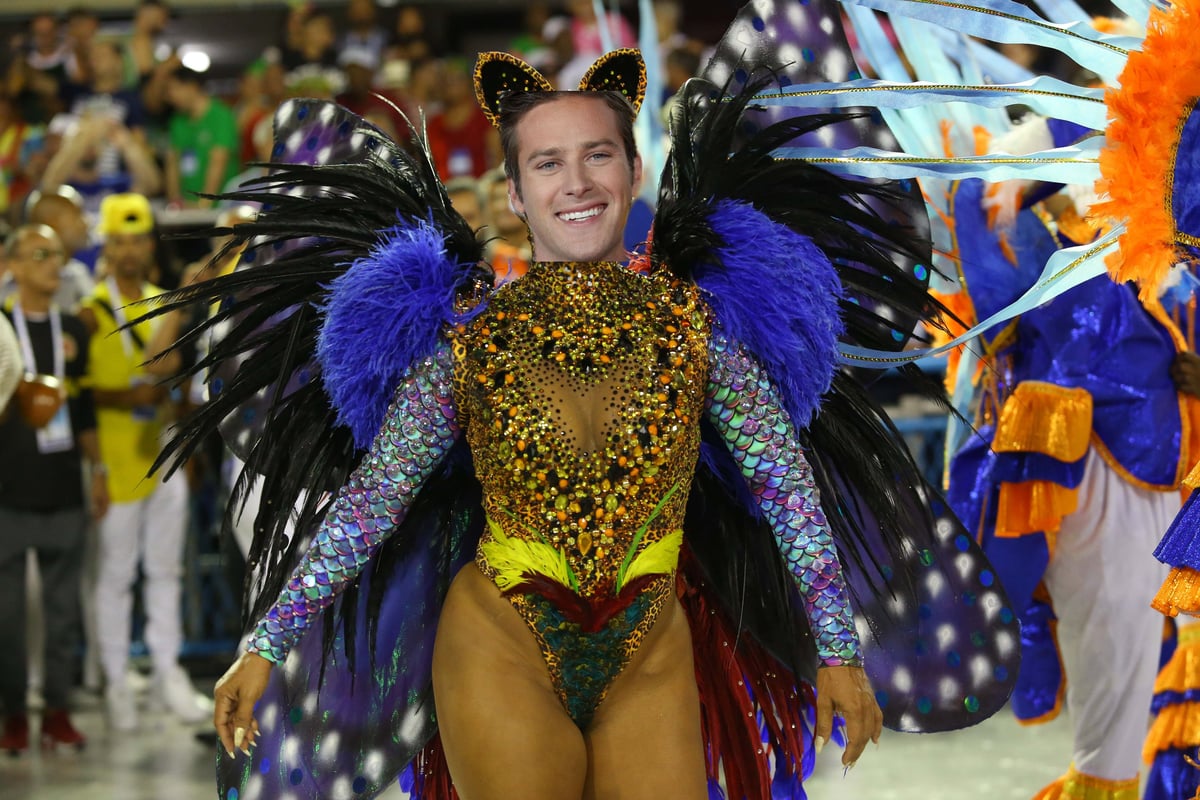 "Ok. So I followed it up with the message 'I want to eat you.' Oh and then 'I need to drink your blood.' And then I asked her why she was being distant..."

"ARMIE WTF MATE. Why the distance?? Maybe because you confessed to being a cannibal which is really frowned upon? Socially? And criminally? I didn't know I needed to stipulate in your contract that you're not allowed to be a cannibal? I just thought that was a given??"

By that point the texts were everywhere. They'd been published on Instagram and once everyone went through the 'who's Armie Hammer?' 'The movie guy... who's not Timothee Chalamet' process, the story spread.

But my mum always said that things will be better in the morning. So I went to sleep and said a little prayer. It will all blow over, I thought. It's a few dirty messages. There are worse...

By the next morning, things were much worse.

"You just live to obey and be my slave. I will own you. That's my soul. My brain. My spirit. My body," one message read.

"I decide when you eat, when you sleep... when you use the bathroom. Everything... You don't get to think about anything except doing what I say."

Who messages someone this sh*t from their verified Instagram account? He doesn't need a publicist to tell him this was never going to end well? Like, Sir, did you miss the Me Too movement? Were you... present? You literally have ONE job and it's to not tell women you own them/want to steal their toes and keep them in your pocket. You can do ANYTHING else.

Watch the trailer for Call Me By Your Name. Great movie. Now a questionable cast... Post continues below.

By Wednesday, after a source claiming to be friends with Armie's ex-wife Elizabeth Chambers told the Daily Mail she was "shocked and sickened", it became clear we'd need to make a statement.

I sat down at my desk with my pencil and notebook.

'All you need to do is look at my history to know it's not true...' I began, but then I got an Apple alert about how Armie had told Playboy in 2013: "I liked the grabbing of the neck and the hair and all that. But then you get married and your sexual appetites change."

Then some picture reemerged that he shared on Instagram in 2015 of a dissected pig and, yeah, it didn't look good.

That's when I consulted The Publicist's Handbook. I flicked through crises, and landed on the chapter dedicated to 'Movie Star Embroiled in Cannibalism Scandal'.

According to the handbook, the rules are that you gotta pull out of the movie. But frame it as "requesting" to be "recast" given the "imminent start date". And if possible, mention any children that exist. And how they need to be looked after etc. etc.

In the end, he told Variety, "I’m not responding to these bulls**t claims but in light of the vicious and spurious online attacks against me, I cannot in good conscience now leave my children for four months to shoot a film in the Dominican Republic. Lionsgate is supporting me in this and I’m grateful to them for that."

I've told him that if we lay low for a while it might all blow over.

In the scheme of things, cannibalism isn't even that bad! (Cannibalism is absolutely that bad).

This article is satire. I am not really Armie Hammer's publicist (thank God).