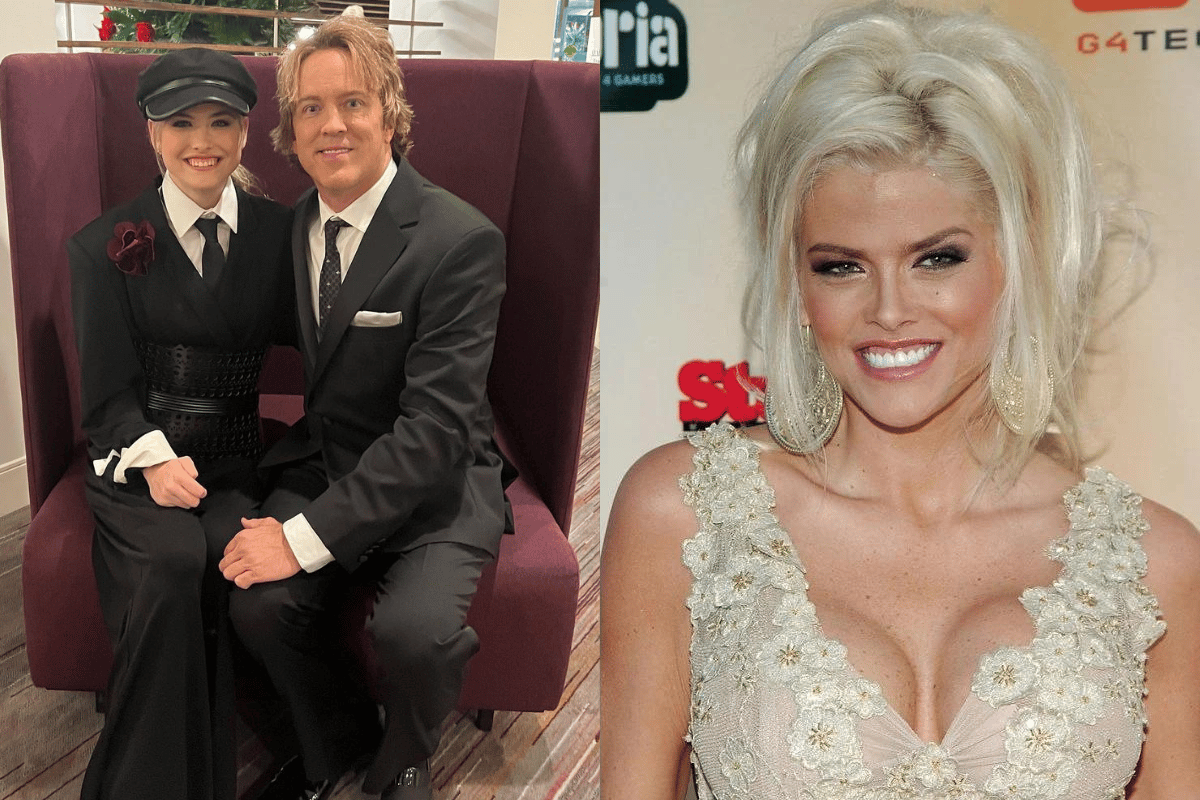 Three days after the birth of Anna Nicole Smith's second child, the actor lost her firstborn. Over the span of just one week, her life reached immeasurable highs and devastating lows.

But it was the lows that stayed with Anna Nicole Smith, seeing her overdose just months later.

Now, almost 16 years on from the moment Anna Nicole welcomed her second child and lost her first, her daughter – Dannielynn Birkhead – carries on a tradition that helps her connect with her late mother.

Dannielynn joined her father Larry Birkhead at the Barnstable Brown Gala – the same event in which he and Anna Nicole met for the first time.

And last week, the 15-year-old got the chance to wear one of Janet Jackson's most iconic outfits while attending the event. Dannielynn wore the same black pants suit, oversized belt and newsboy cap Janet wore in 2003 to the pre-Kentucky Derby event.

“It was purchased as a part of Janet’s @juliens_auctions benefiting charity,” Dannielynn’s father, Larry Birkhead, wrote in a post on Instagram. “#prouddad.”

Since Dannielynn was born, she has never celebrated a birthday with her mum.

This year marked 15 years since Anna Nicole's death, from an accidental drug overdose on February 8, 2007.

Inside the years before Anna Nicole Smith's death. Post continues after video.

In honour of Anna Nicole's death, Larry wrote a tribute to the late model.

"Still remembering this one 15 years after her death. She was truly one of a kind. She struggled for love and acceptance. Just when she found a little piece of one or the other, life seemed to sabotage," he wrote. "Today, I remember your heart, your soul and your beauty, both inside and out. Your love is alive still to this day, in the form of a truly one of a kind teenager with her Mom’s smile, beauty and courage... We love you Anna Nicole."

In 2020, Dannielynn's father confirmed his daughter was doing well, and honouring her mum's memory.

The 48-year-old told Daily Mail TV that he’s tried hard to let his daughter lead a private life at their Kentucky home.

“I never push her in a certain direction. Right now she’s just being a kid,” he explained, when asked whether Dannielynn would go into modelling.

It would certainly be an obvious career path for the teen, who has inherited her mother’s looks and acting skills. But unlike Dannielynn’s quiet life as a teen, Anna Nicole coveted a different existence.

In 1982, a 14-year-old Anna Nicole dropped out of school. In 1985, when she was 17, she married Billy Smith, the cook at the fried chicken restaurant she was working in. Anna Nicole then gave birth to their child, Daniel, in 1986.

Five years later, working in a strip club, Anna Nicole met 86-year-old oil tycoon J. Howard Marshall. She commenced and continued an affair with him until her divorce in 1993.

It was the same year she won Playmate of the Year for Playboy.

The win was crucial to Anna Nicole’s career. After that, she won high-profile, valuable contracts with H&M, and replaced Claudia Schiffer as the face of Guess. She also acted in movies such as The Naked Truth, and had her own reality show, The Anna Nicole Show, in 2002.

J. Howard Marshall and Anna Nicole married in June of 1994, amidst public accusation that she did so only for the money. This suspicion was further confirmed by the model herself, with her public assertions that she hadn’t slept or lived with the billionaire – ever.

After 13 months of marriage, J. Howard. died in 1995. Until her death in 2007, more than a decade later, Anna Nicole fought his estate in court for a share of his wealth.

In September 2006, Dannielynn was born, and media identity and attorney Howard Stern, whom she was dating at the time, was listed on the birth certificate as the father.

On September 10, 2006, whilst visiting his three-day-old sister and his mother in hospital, Daniel died of an accidental drug overdose.

According to investigators, Anna Nicole’s final days were likely spent in a drug haze. At the time, Stern said she had suffered flu-like symptoms and was taking anti-viral medication.

Her personal nurse discovered her unconscious in bed that afternoon. She was pronounced dead shortly afterwards at hospital.

An autopsy later revealed that Anna Nicole had a combination of various medication in her system. These drugs were said to be the "major component" in her death: the cough medicine Benadryl, three benzodiazepines, Clonazepam, Lorazepam and Diazepam (Valium).

In April 2007, a DNA test confirmed that it was, in fact, Larry Birkhead who was the girl’s father and he was awarded full custody.

Dannielynn revealed that sharing a birthday close to the late Daniel was a good way to incorporate his memory in the family.

To honour her mother, Dannielynn modelled for Guess in 2012, for the 25th anniversary of Anna Nicole’s campaign.

Birkhead said it was a special moment.

“We took her to New York to show her the billboard – it's freezing cold,” Birkhead shared with Daily Mail TV.

Dannielynn was proud, but she admitted it felt somewhat strange.

“It was kind of weird to see me in all of that, like giant billboard in New York… [but] it was actually really cool because now I get to know what it felt like.”

Reply
Upvote
1 upvotes
Man, I can remember the headlines, but when you lay it all out sequentially, ANS' life makes a pretty wild read.
If I was Daniellyn's Dad, this quote would be worth exploring a little more:
“It's really cool like to act as a character, not yourself. Portraying a new person is fun.”
Open to a few interpretations.
C
cat 2 years ago

Reply
Upvote
@gu3st what other answer would you get if you ask someone why they enjoy acting?
J
Janelle Claire Berner 3 years ago

He seems to have done a wonderful job bringing up a well adjusted and beautiful young girl. I wonder if Anna Nicole hadn’t died, if she would be this way. I doubt it. She doesn’t have Anna Nicole’s looks either, she’s prettier.