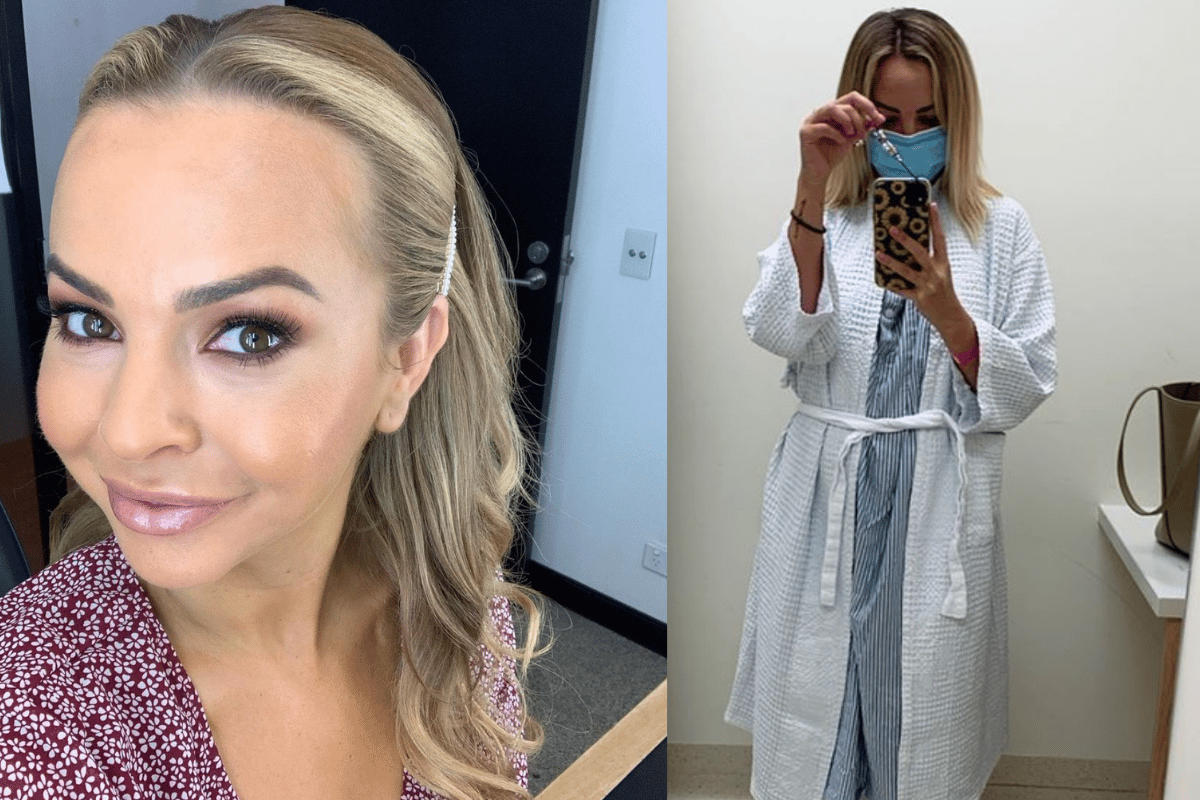 This week, Angie Kent, best known for being on Gogglebox Australia, I'm A Celebrity... and The Bachelorette, opened up about her experience with polycystic ovary syndrome (PCOS) and endometriosis.

Taking to Instagram to share a photo of herself in "compression socks, a stripy surgery backless gown (hot), surgical blue slippers and a diaper", Angie revealed she had been in hospital due to her conditions.

Undergoing a laparoscopy and hysteroscopy, which involved an endometrial biopsy, a dose of botox in her pelvis to help with nerve damage and numerous other things, Angie's surgery was complicated to say the least.

And from the surgical investigation, Angie was told she has a new diagnosis: interstitial cystitis. She had never heard of it until she received word from her surgeon after the day's procedures.

"All I know about IC is that it's often undiagnosed for a long time, but it can cause a lot of nerve damage if it does go undiagnosed for too long. Now I have an answer to why I have to pee every 45 seconds and why my pelvic/bladder pain can be out of this world," Angie told Mamamia.

"I now have IC to add to the already long list of conditions and I am trying to educate myself. I knew there was something more going on. After I shared my new diagnosis, there are so many women who have IC but felt they were alone because no one else was speaking of it."

Ultimately, Angie's experience has been "a marathon not a sprint", the 32-year-old celebrating the small wins and improvements when it comes to her conditions.

A year and a half ago, Angie had a far greater amount of scar tissue and endometriosis found during a laparoscopy. And although scarring was found on the left side of her pelvis this time around, it was far less than previously.

"Having all these 'invisible' illnesses is incredibly exhausting, painful and expensive," Angie shared.

As for what PCOS has meant for Angie, it's been weight gain, skin issues, mood swings and chronic fatigue - on top of the debilitating pain. Simply put, it's a lot.

And she's not alone.

Approximately one in ten of those assigned female at birth are affected by endometriosis. It's the same story for PCOS. So despite over one million Aussies suffering from this chronic condition, many of us still know very little about it.

Dr Janine Manwaring - Gynaecologist and laparoscopic surgeon told Mamamia's The Quicky: "There unfortunately isn't a single diagnostic test. The diagnosis is still based on surgery."

She also noted: "We know that endo is a hormonally-sensitive condition and however it is treated, you are removing those actively hormonal cells you can see. But there's always a level of microscopic disease left. After about five years at least a third of women who have had surgery previously will need surgery again."

For Angie, it's important to have these conversations and share her story, in the hope it will encourage others who are struggling to do the same.

Listen to The Quicky: One in ten women have endometriosis: here's what you need to know. Post continues after audio.

"I do have hope. What is life without hope? 'A little hope for tomorrow, a little hope to mask my sorrow!' It's the power of attraction and all that, and it might seem a bit woo-woo. But when you know you are not alone and there are amazing professionals out there willing to hear you out, hold and support you, it does make you want to want to keep trying for yourself and for others in similar situations," she said to Mamamia.

But of course there's always more that can be done.

"I still think we have a hell of a long way to go before womb warriors are completely supported. I think women and those with wombs are more open because we have had enough and we know that we are worth it. Well, they will continue to keep knowing their worth if I have anything to do with it - that's for damn sure!"

As the saying goes: knowledge is power. And shared knowledge can be even more powerful.

A powerful quote that Angie reshared on her socials said: "I don't talk about my illness for attention, I talk about it to support others and raise awareness."

Unpacking what this meant to her, she reflected: "I feel women have been suffering in silence for so long now. The amount of horror stories I have come across since being comfortable and secure enough to share my experience has been astronomical. For years I felt as if I should keep quiet due to being medically gaslit or simply just being so uneducated surrounding anything to do with the female anatomy."

And for Angie personally, she feels that if she can create some kind of change and help just one woman, then "I feel all this pain and trauma I have been through has a silver lining. It wasn't for nothing".

"I love women and people with wombs so much. I think they are so resilient and so powerful. I want them to know they are not alone. And how important it is to be our own health advocates!"

Plus the response Angie has received from sharing her story has meant the world to her. But it also breaks her heart to see just how many people have the same shared experience.

"It makes me sad how long women have been trying to find answers or have been sent to an unhelpful professional. Your trauma and pain is valid even if there are those who have it worse, or someone says 'it isn't a big deal'. I am doing it for the old me who was too afraid to speak up and get the treatment and understanding her body deserved."

And amid her health struggles, Angie has also been dealing with the grief of her losing her dear friend, naturopath and health coach last month.

"I felt totally lost. It was right before this next big surgery and I just thought 'f**k'. What am I going to do without her and how much space she held for me and other women over the years. I have an amazing surgeon who works alongside someone who used to work alongside my naturopath, which is very important to me."

So as for what next 2022 has in store for Angie, she hopes there is a lot of healing and progress.

"I have learnt a lot of my suffering has come from not treating my body the way it should have been treated due to trauma, past conditionings, not being educated on the female body, eating disorders and mental health. I just hope women realise there is so much linked between mental and physical pain. You do not have to put up with pain," she noted to Mamamia.

"Getting this body ready for the best year yet... and perhaps for a little human to grow inside it soon. Watch this space."

For more information and support you can visit Endometriosis Australia.