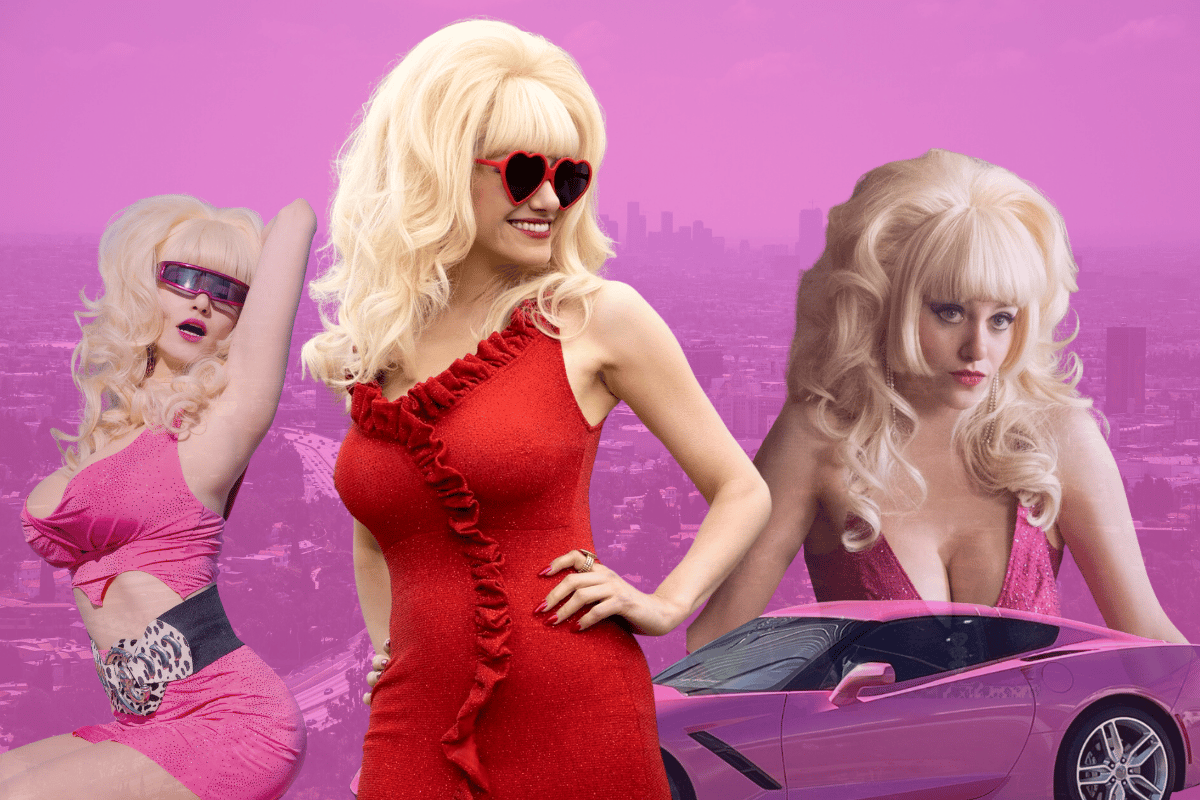 Stan's new series Angelyne is here, exploring the fantastical world of Angelyne herself - a media personality who rose to prominence in Hollywood during the '80s thanks to her iconic car, billboards and blonde hair.

Before there was the Kardashian family or Paris Hilton, there was Angelyne, arguably the first real 'influencer' of her time, who was simply famous for being famous.

And that's what Stan's new series captures - the true (ish) story behind the woman herself and the revelations about her personal life that arose decades after her initial rise to fame.

With that in mind, Angelyne is all about fame, identity, survival, billboards, Corvettes, lingerie, and a whole lot of mystery. Plus, the show examines influencer culture before reality TV and social media even came into existence.

And she is played by none other than stellar actress Emmy Rossum.

Take a look at the trailer for Stan's Angelyne. Post continues below.

Throughout the '80s, Angelyne built a brand new identity for herself with the sole focus on obtaining fame.

She organised for images of herself to be featured across billboards in Los Angeles, California, posing suggestively and emulating the 'blonde bombshell' mystic.

From there she would be paid for media or party appearances, offered roles in films, recorded music, and did magazine interviews and television shows.

What was perhaps the biggest celebrity symbol attached to Angelyne was also her iconic pink Corvette convertible, which she regularly drove around Los Angeles to be spotted by fans. She also sold images and merchandise with her face and name on them, as well as charging fans to take a picture with her.

Ultimately, she was a talented hustler who managed to keep most of her life's story completely hidden behind the 'Angelyne' persona.

It wasn't until 2017, that Angelyne's real identity became publicly known thanks to an article by The Hollywood Reporter.

It turns out Angelyne - real name Ronia Tamar Goldberg, later changed to Renee Tami Goldberg - was born in Poland in the 1950s to Holocaust survivors.

The article - which the new Stan series is based on - aims to uncover why Angelyne has dedicated her life to transforming herself into what she continues to be today -  a blonde and pink enigma, who continues to be seen driving around in her statement Corvette, now in her 70s. 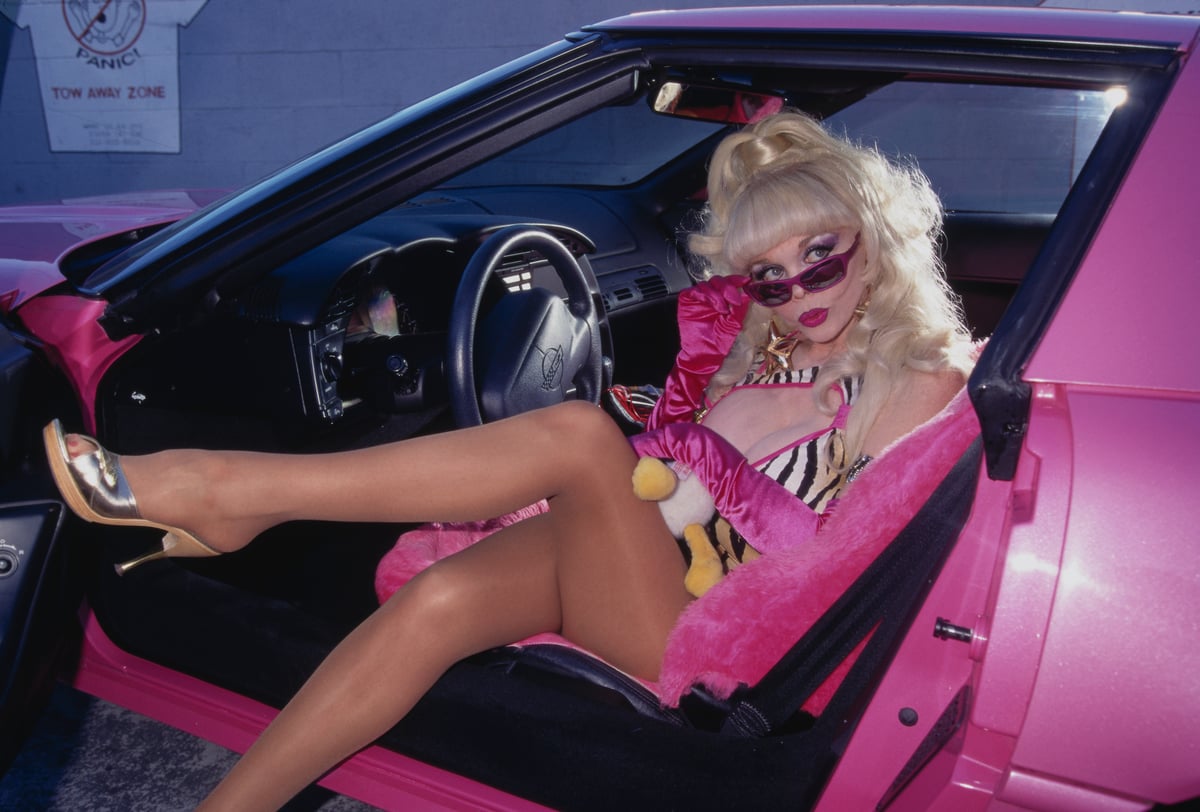 Rossum said that getting into character was half the fun of filming the series.

"I just got really used to setting the alarm, having my coffee on the road, and listening to all the news podcasts while sitting in the [makeup] chair," she said to Yahoo Entertainment. "Before they started the process, they would bless me with a pink magical wand that was battery operated and made a funny noise. We tried to kind of bring Angelyne's positivity and sense of whimsy to the trailer."

Given it was important to Rossum and the team to create an authentic depiction of Angelyne, it took hours in hair and makeup to achieve the right look, Rossum said.

"It's obviously very different than my body. And in terms of recreating her billboard poses and the original archive footage that we do as well, it was very important to me to get it authentically as perfect as we could, because we're also balancing this incredibly unconventional way of storytelling with hyper-fantasy elements as well."

Rossum is also an Executive Producer on the show, and said meeting the real Angelyne was surreal.

Angelyne also gave her blessing to Rossum and the rest of the cast for recreating her story.

"I had the opportunity to meet and sit with her, and it was an incredible experience. I told her that I had probably read and seen everything that she had ever done. I told her that I wanted to create a show that was not by any means a biopic, but something that was honouring this fantastical mythology that surrounds her and return some of that mystique. She seemed to really like it," Rossum said.

Describing Angelyne as a "magical enigma", Rossum went on to say that she admired Angelyne's ability to carve out a niche for herself, build a brand and be able to profit from it. It's a concept that was pretty foreign for Angelyne's time, so considering so many of us are able to do that now via digital technology, it's quite remarkable what Angelyne achieved, Rossum said.

"She made her outside reflect how she felt on the inside. She is kind of the original influencer who raised their hand and had this brilliant idea of 'I'm going to be famous for who I am not something that I do'. She turned her life into living, breathing art - and I think that's incredible."

Rossum concluded - "This opportunity is really every actor's dream."

All episodes of Angelyne are now streaming, only on Stan.

Reply
Upvote
That auto-hagiography was far and away the word-nerdiest burn that I've managed for some time and I'll confess to more than a little disappointment that it was cut.

Reply
Upvote
So, I've seen Emmy togs off in Shameless.
In that promo shot above, Emmy seems to have grown...as an actress.
That...that maternity or Hollywood help?
Pretty damn method.
C
cat 2 months ago

Reply
Upvote
1 upvotes
@gu3st if you had read the article you wouldn't need to ask this creepy question.

Reply
Upvote
@gu3st  its used when people make comments that reduce a woman to a sexual object, as you did.