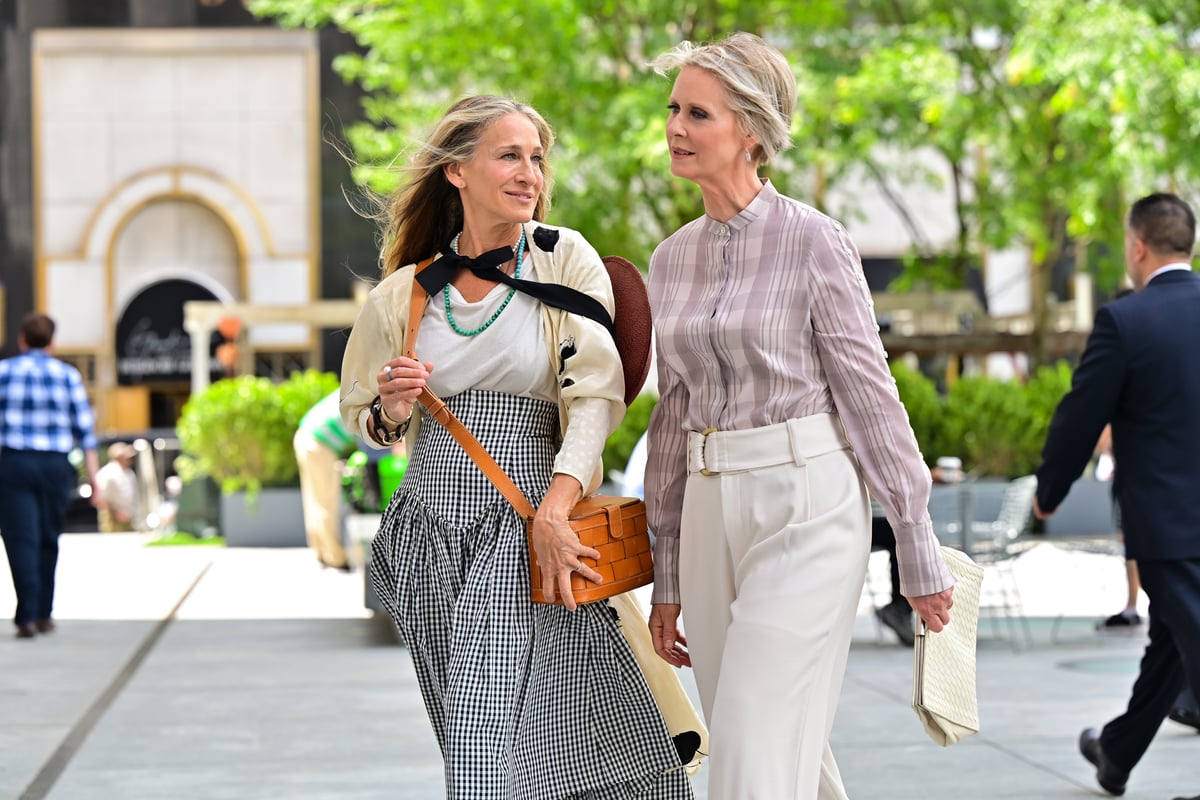 When I first heard the Sex And The City reboot was happening - I remember thinking 'it'll be interesting to see how the ladies have sex now'.

After all Samantha, Carrie, Charlotte and Miranda basically taught me how to have sex and they certainly taught me that my own sexual pleasure matters.

I wanted to see what I could be expecting in the future.

Are orgasms still a thing when you have a mortgage in Brooklyn? Is sex still a priority when you can now afford every designer shoe in Manhattan? How much is sexual pleasure a part of happily ever after? Is Charlotte still having the best sex of her life with Harry? You know, the big burning questions, - the sexy questions.

However, I'm five episodes in now, and I can confidently say I don't know.

In the meantime, the last sex-centred conversation that happened before the infamous kitchen scene was when Miranda admitted casually that Steve and her hadn't had sex in years. While I understand these stalemates can happen in any marriage, wasn’t the whole point of Sex And The City that these women did talk about sex and wade their way through sexual issues rather than ignoring them?

Weren't these women leading the charge in women not settling for sexless relationships? (Surely Steve’s libido didn’t disappear with his hearing?)

Obviously, it’s worth mentioning that And Just Like That is sans Samantha but I didn’t think it would be sans sex. Sure, Samantha was brazen and ruthless about sex. Remember when she broke up with the guy because his penis was too small? But she was never actually having more sex than the other characters. It’s just that she was often only looking for a good time, while the others were looking for both orgasms and love. But, let’s never forget that Charlotte shacked up with Harry partly because the sex was so great.

Remember when Carrie grappled with the politician that wanted her to pee on him? Or Charlotte dated that man that thought licking someone's face was the equivalent of making out? Sure we could write these storylines off as frivolous and funny but they started conversations, like what is good or bad sex from a female perspective? I personally think it has changed how everyday women talked about sex.

The show opened up a conversation about female sexual pleasure that is still ongoing.

So, I wanted And Just Like That to build on that. Obviously this time, the focus wouldn't be on sex while you're single, but sex when you've been in a long-term and assumedly monogamous relationship. I wanted to hear women in their 50s discuss sex honestly and frankly, from lube to shifting sex drives to keeping the spark, whatever that 'spark' might be. I wanted them to discuss these things with their signature wit and charm that talked to women not down to women. Surely there is potential for a plot about how Carrie may miss sex but feel conflicted because she’s still in mourning.

I particularly wanted them to dive back into these issues in a post #MeToo and woke world. Sure, the ladies covered a lot of sexual ground in the first series but conversations about consent and new sexual trends like choking, seem like interesting topics to cover.

After all, there's no other representation of that in mainstream media. Women are usually sexualised in their 20s and 30s and then ignored from their 40s onwards. I hoped the new show would shine a light on women's sex lives in their 50s and beyond, because women don't just close up shop after their first hot flush or when they find their first neck wrinkle.

Their sex lives evolve and change and sometimes improve and these stories are still mostly untold.

The fact that Miranda’s son Brady was the only one having sex in the first four episodes was also frustrating. Is the show suggesting that groping and bodily fluids is only for the young? Because wasn’t the whole point of the first series to show women as sexual beings with credit cards and autonomy? If I wanted to dive into a teen’s sex life there’s plenty of television options - reruns of Gossip Girl or The O.C anyone? But there’s no show on television candidly discussing women’s sex lives in their 50s.

Listen to Mamamia Out Loud's episode on the Sex And The City reboot, And Just Like That. Post continues after audio.

Of course, I know there's currently a lot going on in the series. Carrie Bradshaw has lost her husband, Miranda is studying and diving into new territory, and Charlotte is navigating raising teenagers. These are all plot points I'm really enjoying, but there’s barely any sex.

Even the new characters on the scene that seem to be bursting with personality only have implied sex lives. What about sex when you are navigating IVF? Surely Che has a pretty exciting sex life, and if not why not? Surely Miranda isn’t their only sexual interaction? But none of this is explored, and I'm desperate for it!

Still the latest episode is proof that sex can be a huge part of this new series. Che and Miranda having an incredibly steamy scene in the kitchen, while Carrie recovers from a hip operation, is peak Sex And The City. Mixing the serious and mundane with the salacious. Still, that scene just reminded me how much I’d love for all the main characters  to be exploring their sexuality more. It’s certainly highly entertaining - if the kitchen scene is anything to go by!

I understand that the show is choosing to lean away from sex and into what life is in your 50s, which is juggling everything from raising families, to starting again, to dealing with death. So perhaps there's less space for orgasms. But the thing I loved about the original series was there was always time for sex - it could tackle breast cancer in the same episode it tackled dirty talk. It talked about real-life whilst also including women’s sexual lives in the mix.

There are more episodes to go in this season, so perhaps in the future, the ladies will dive back into their sex lives, and the plot will begin to blend with their bedroom activities! So there is hope, and I really hope that’s where we are headed. Every character deserves their own version of that kitchen scene.

Because I don’t want to live in a world where Carrie’s sex life isn’t as fabulous as her wardrobe.

Reply
Upvote
I agree completely. I loved how mature sex was displayed without apology in Binge’s new series ‘Love Me’. The writers of ‘And just like that’ could learn something from the way that show just went there!
M
mamamia-user-482898552 18 days ago

Reply
Upvote
@anniej333 I think much of the series problem is that these women are meant to be in their fifties, but they keep referring to age as though they are in their eighties. The character of Samantha was the same age as they are now, and she portrayed a far more progressive representation of aging than we're being shown now.
S
simple simon 19 days ago