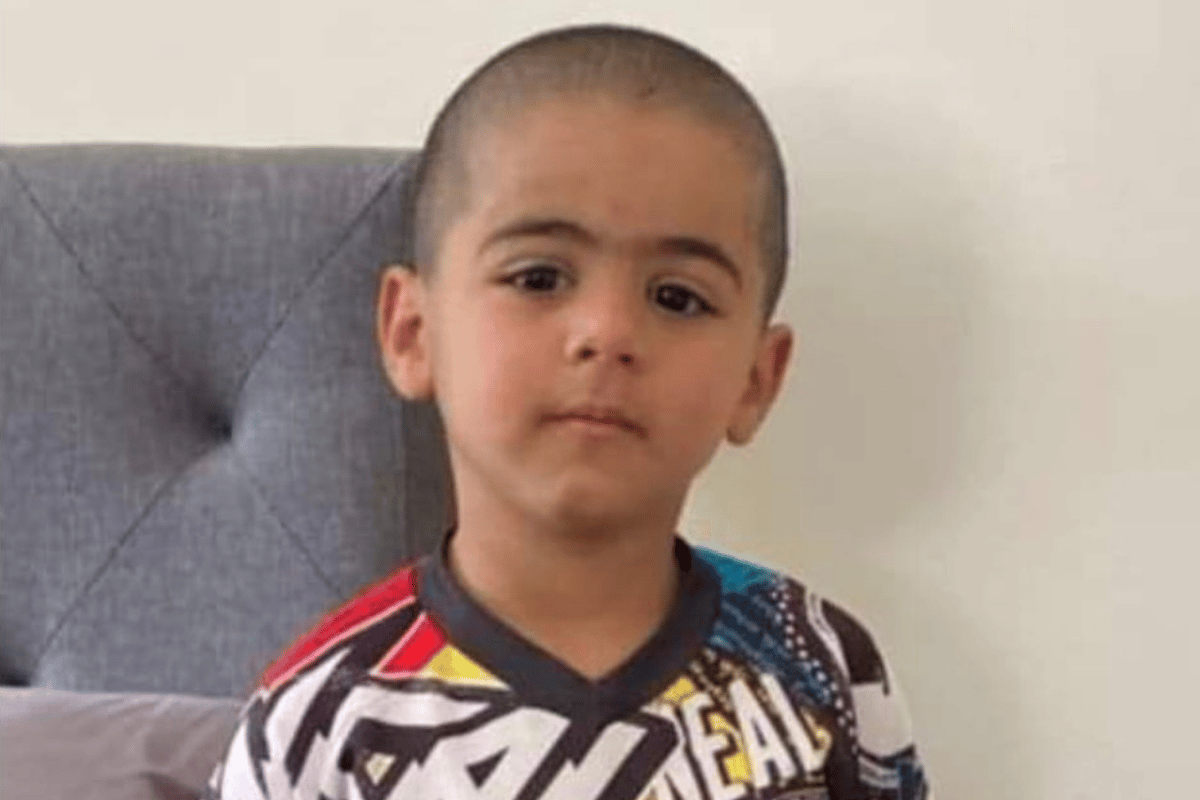 On what was described as a "typical" Friday morning, three-year-old Anthony 'AJ' Elfalak went missing from his family's Hunter Valley home.

AJ, who has autism and is non-verbal, was being looked after by his older brothers who were playing outside their home in Putty.

His mother and godfather were preparing lunch in the kitchen while his father was outside fixing quad bikes. Then, one of his brothers needed to go to the bathroom.

"The oldest boy needed to go to the bathroom and took the youngest one, AJ, and he left him just inside the dining area," his godfather Alan Hashem told the Today show.

"After a few minutes, the boys come out and entered through the other part of the house and the mother goes, 'Where's AJ?'"

Side note: Watch Mamamia explains, walking you through what is happening in India. Post continues after video.

"The boys had a puzzled look on their face. We all stand up and at that moment I had the closest view to the driveway and noticed a white ute, we believe either a Mazda or a Toyota, a much older model. It was slowly driving through here."

Mr Hashem went on to say that the family didn't think much of it at the time and thought "if AJ's gone somewhere it's not going to be far".

The family took four ATVs to try to search for the boy, covering thousands of square metres, but he could not be found.

That afternoon, just before 12:30pm, police officers responded to reports of the missing toddler at the 263-hectare property.

On Sunday, police seized a white ute which the family noted was in the area around the same time AJ went missing.

The following morning, Mr Hashem said he feared his godson had been abducted and claimed that CCTV cameras he installed on the property were missing footage during the time of his disappearance.

"Without a doubt [he has been abducted]; for the simple reason he is on the spectrum of autism but he is always quite afraid and attached to his mum," he told the Today show on Monday.

"There’s footage missing, unexplained. Days before, days after, but not during the time."

"You know what's more alarming? We installed it so high you can’t tamper with it and we had two mechanisms of storage, cloud storage and physical storage, and there’s no data in that time slot.

"We provided the username and password to the police, we provided them the actual original memory card. There’s a lot of explaining to do."

Thankfully, after a three-day search in rugged bushland, AJ was discovered drinking water on a nearby riverbank by a rescue helicopter around 11:30am on Monday morning.

Police said the helicopter directed ground search crews to his location, about half a kilometre from the family's home.

SES volunteer Greg Chalmers made first contact with AJ, who gave him "the biggest smile".

"Here's this beautiful little boy, kneeling in the water trying to get a drink," he told Sydney radio station 2GB on Tuesday.

"It was fantastic to absolutely see this little boy was actually alive."

"I put my hand on that little boy and he looked around and gave me the biggest smile.

A three-year-old child missing on a rural property in the Hunter region since Friday has been located following a large-scale search.https://t.co/VrlVwL4sYW pic.twitter.com/byOXFCiD1j

The three-year-old had survived three nights alone in the bush in temperatures which dropped around three degrees. He was assessed by NSW Ambulance paramedics before being taken to hospital with minor injuries.

At the time, Mr Elfalak confirmed his son was alive and was in a reasonable condition.

"He's got some nappy rash, he's been bitten by ants, he's fallen over — but he's alive," he told reporters.

"He's just clinging to mum — as soon as he heard his mum's name he opened his eyes and looked at her and fell asleep."

Footage broadcast by Nine showed the boy's family jumping for joy when they heard he had been found.

"Thank you to my friend, my cousin, my sisters, my family. Thank you, everybody and whoever prayed for us."

One of AJ's uncles, Louis Elfalak, said it was a "miracle" he was found alive.

"Everyone started losing hope, thinking the worst," he said, according to ABC.

Meanwhile, Mr Hashem, told Nine that he had barely slept for days during the search.

"We were driving ourselves crazy, this kid could barely walk," he said.

The family later released a statement thanking police, emergency services and the community for their efforts.

"Our family is together again. For that we are grateful to everyone who has assisted in any way over the last three days," they said in the statement on Monday.

"Thank you to the NSW Police, Rescue Services, volunteers, community members, friends and family who have worked tirelessly to find AJ."

"From a policing perspective we will still be continuing our inquiry to understand what has occurred over the past three days," she said.

"I know everyone has lots of questions."

Ms Chapman also addressed the CCTV footage in an interview with Sunrise, saying that "there could be any number of reasons" the footage is missing around the time AJ disappeared.

"There was certainly some period of time where there was no recording on the CCTV footage and we will continue to look at that," she said, adding that the camera was a "motion-detected CCTV" camera.

"That’s still part of our inquiry and obviously as I said our investigation will continue to look into those aspects."

According to 7NEWS, it's also being investigated whether there was a 'sinister reason' to abduct the toddler.

Investigators are also trying to figure out how the boy survived being alone in the bush without anything to eat for 72 hours and in temperatures that dropped around three degrees.

Questions also remain on how he was discovered half a kilometre from the family's home without being spotted by rescue teams earlier.

However, Aviation commander Detective Superintendent, Brad Monk, says the search team would have walked past him.

"There's no doubt that the young fella was in close proximity of searchers during and throughout the search," he said, according to the ABC.

"It's just dense terrain and if you're unable to see him with the naked eye, then you will simply walk past his location. There's no doubt that would have happened."

Anthony and Kelly Elfalak and their four sons moved to the property just months ago as Mr Elfalak's work as a plumber dried up during lockdown.

More than 130 people were involved in the search over the weekend, with volunteers helping police on foot and on dirt bikes. Divers also searched and drained a large dam on the property.

Reply
Upvote
3 upvotes
So was this an abduction or not? If not, then what about the person who owned the white ute that was seized? So many questions...

Reply
Upvote
1 upvotes
@talezassian right? Why was the mother so sure he'd been abducted, surely on a rural property it's more likely that he'd wandered off or fallen into a dam? If he was only 500m away, why did it take three days to find him? What's going on with the security camera situation? Perhaps there's a perfectly logical explanation for it all, but it does make me wonder.
C
cat 8 months ago

Reply
Upvote
@talezassian no, I don't think there was abduction. I think the family were looking for explanations when they couldn't find him, and police are primed for another case like William Tyrell.
C
cat 8 months ago

Reply
Upvote
1 upvotes
@rush they had searched that area, so he was probably somewhere else and then made his way back to there. I think the family were convinced he would never wander off alone therefore must have been taken, but the fact that anyone was even searching meant the police always thought it was more likely he was on the property. But panicked parents don't have to be rational.
D
dp 8 months ago

Reply
Upvote
1 upvotes
@rush all questions I thought of too. 3 nights is a long time for anyone to be out in the bush, let along a small child. I really hope there was nothing sinister behind it and it was a genuine case of him being lost in the bush.
News
General
Opinion
True Crime
Politics
Sport
Explainer
Entertainment
Celebrity
Reality TV
Movies
TV
Books
Rogue
Royal
Lifestyle
Beauty
Fashion
Weddings
Home
Wellness
Health
Fitness
Travel
Food
Parents
Before The Bump
Pregnancy
Baby
Kids
Teens
School
Parent Opinion
Work & Money
Money
Finance
Career
Lady Startup
Relationships
Sex
Dating
Separation
Friendship
Family
Real Life
Couples