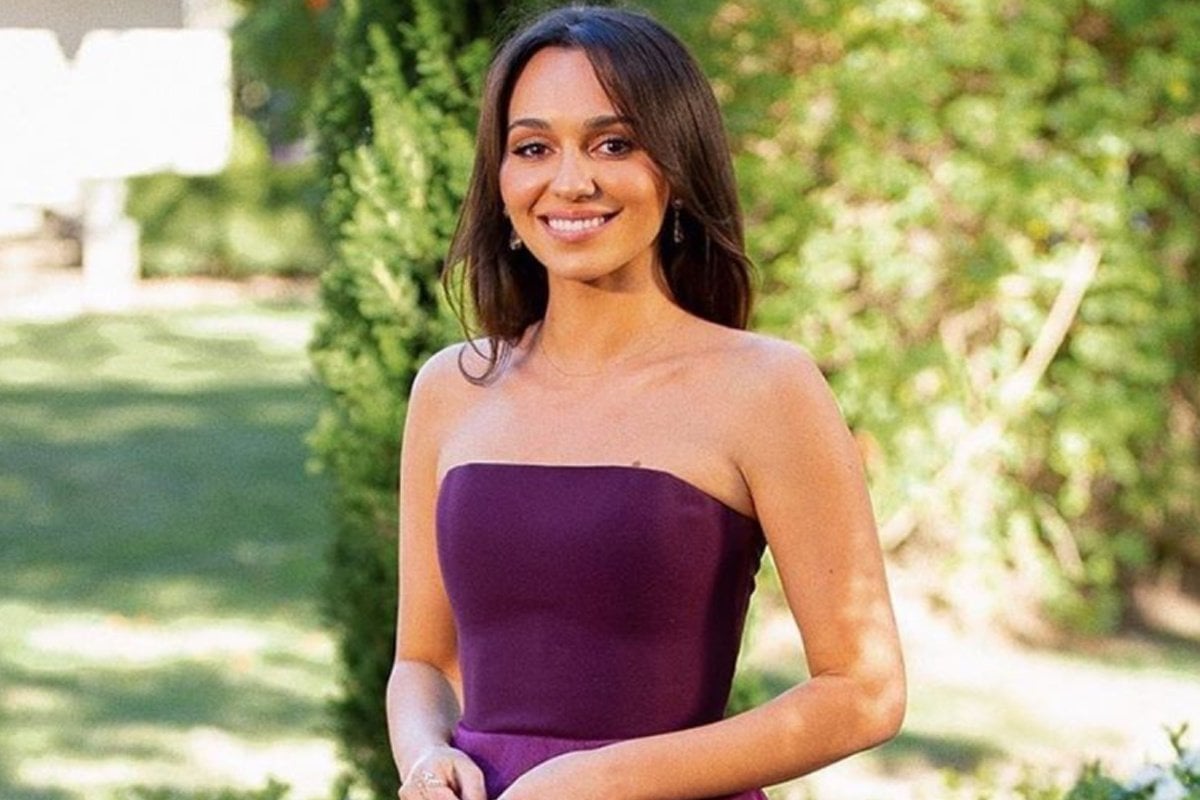 Although many of us thought (hoped) that all The Bachelor drama would be over once the finale ended, we were mistaken.

Since Locky Gilbert broke up with Bella Varelis and proclaimed his love for Irena Srbinovska on live television, plenty of drama has gone down.

As the contestants are no longer tied to any rules, they are free to share and say anything about the show and the people that appeared on it with them. And thank god for that.

From an angry text through to a potential Bachelorette, here is everything that's gone down since The Bachelor ended.

But first... here's the trailer for The Bachelorette which begins next week. Post continues below.

Bella on why she was given the 'villain' edit.

When the season began, Bella Varelis was given the 'winner's' edit with her fairytale entrance on the red carpet. She was quickly pegged as a frontrunner to win Locky's heart. However, a few weeks in, and as other 'villains' left the mansion, Bella was soon portrayed as the 'villain' instead.

On the Shameless podcast this week, Bella explained exactly why she thinks that happened.

"They're not going to make the person he ended up with look bad. I guess I had to cop the brunt of that," she said.

"People on social media tell me, 'You can't blame the edit, those things came out of your mouth!'" she continued.

"Well, no. What you're not seeing are the questions that I was asked to give those answers. They're cutting out the questions to make it look like I'm saying those things on my own accord.

"They're cutting out the taunts and probing, the emotional reactions from other people as well, so you're not seeing the whole story. You're seeing about five per cent of what's happening at that moment."

Well, there you go then.

After we watched Locky Gilbert's controversial breakup with Bella Varelis, we assumed that would be the end of their communication.

But when she appeared on Brittany Hockley and Laura Byrne's podcast Life Uncut, Bella explained that she sent him a "pretty angry" message via text.

"I did send him a message after just to be like, I mean, it was like two days after, I was devastated, I was shattered, I was upset, I was angry," she said.

"It was a pretty angry text, to be honest. The first part was like, 'I feel like I’ve lost my best friend not just my boyfriend. It was a relationship for me.'

While Bella didn't elaborate on what was said that was angry, she did later explain that it's been difficult to get over the whole situation. And we don't blame her.

"Obviously there are moments when I thought on Friday, 'I’m fine, I’m fine, I’m fine'. Then [I] go to dinner with the girlfriends, had champagne and three minutes later I was bawling my eyes out," she shared on the podcast.

"I think I just genuinely thought he was in love with me and I think watching it back was a lot."

It's all been happening in the comments section.

After the announcement was made, plenty of people had things to say about it. Including the popular podcast, So Dramatic!

Uploading the news to their own Instagram account, the host behind So Dramatic, Megan Pustetto wrote, "Congrats to @bellavarelis who has just signed with Australia’s number 1 influencer agency!  Whoever said she went on the show to boost her profile and social media presence must have been tripping!"

And Bella responded, "I'm actually flattered that all you do is post about me. Thanks for the free publicity."

The interaction then became quite heated. 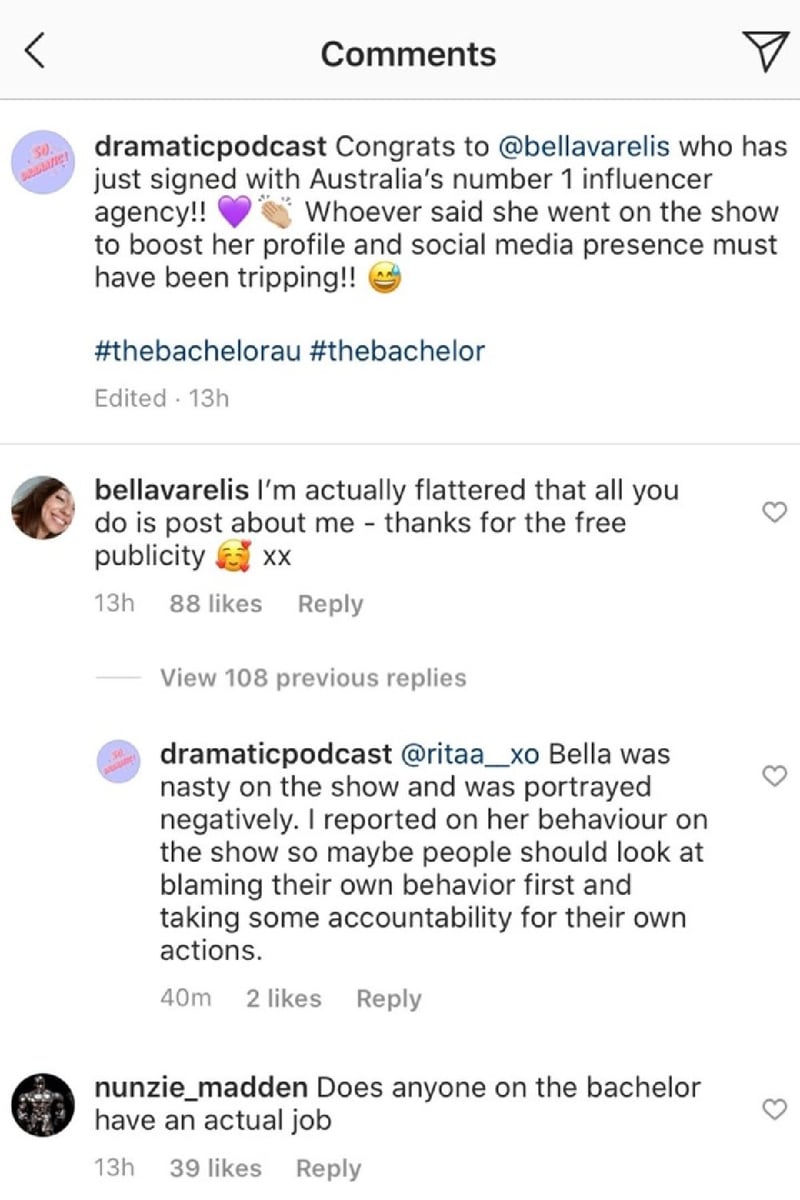 You can read the full exchange here.

Since Locky and Irena announced they're officially dating last week, they have been sharing plenty of loved-up photos. However, they're all very... staged.

The lighting is perfect, the camera quality is definitely better than an iPhone and all looks a little too perfect.

Finally got this guy all to myself @locklangilbert ❤️

But finally, we've seen something a little more candid.

On a trip to visit Irena's family in Wollongong, the couple visited the North Kiosk cafe. And the cafe's Instagram captured it!

Irena also shared a group shot of herself, Locky and her family out together. 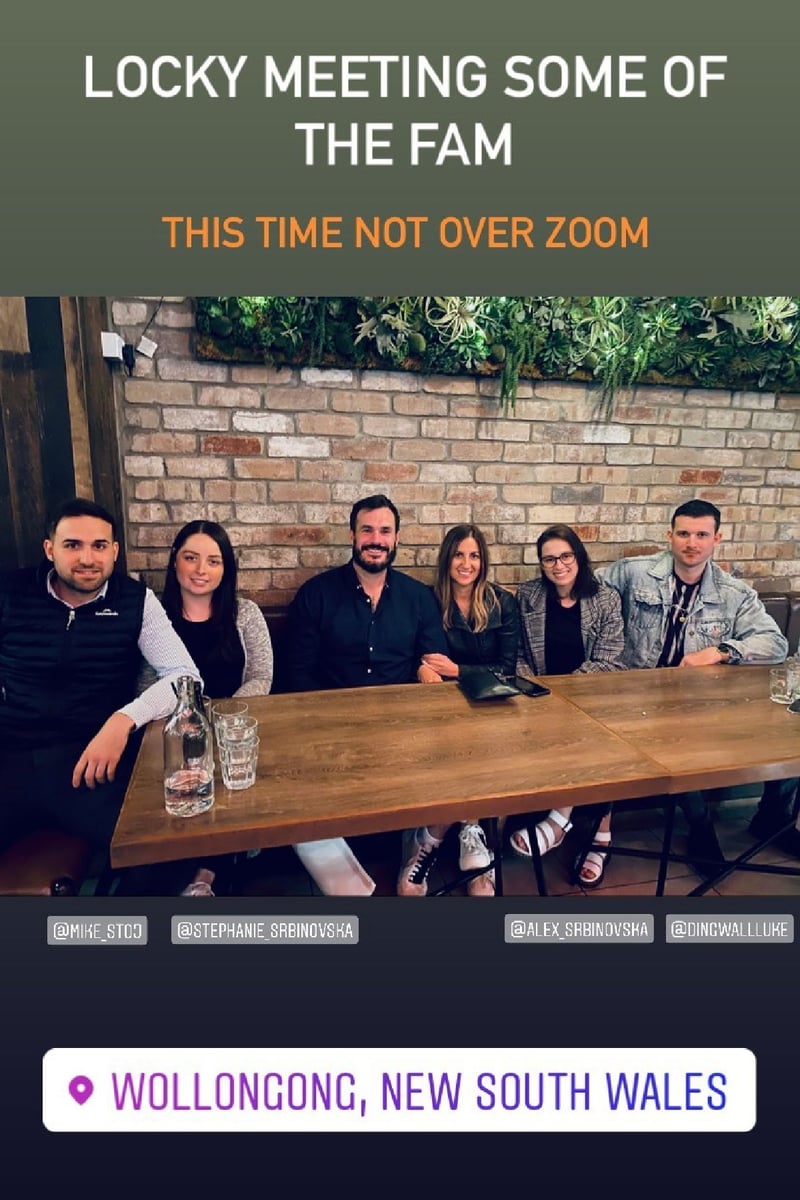 Since becoming runner-up on The Bachelor, Bella has been asked whether she'd consider appearing on other shows from the franchise.

Speaking to The Daily Telegraph this week, the 25-year-old explained why she wouldn't be that interested in Bachelor in Paradise.

"I don’t think I would do Bachelor in Paradise, but that’s mainly because I don’t want to end up heartbroken again," she said.

"What if you do fall for someone, and then they end up choosing someone else?"

However, when the publication asked about The Bachelorette, she had different feelings.

"I probably would say yes to The Bachelorette," she said.

"We all know I’m a hopeless romantic, and I’m a sucker for a fairytale so The Bachelorette would be a sure way of finding my love story. Seeing two of my friends (Matty J and Laura Byrne) find love on The Bachelor proves to me that this does work and you can meet the person you want to be with for the rest of your life."