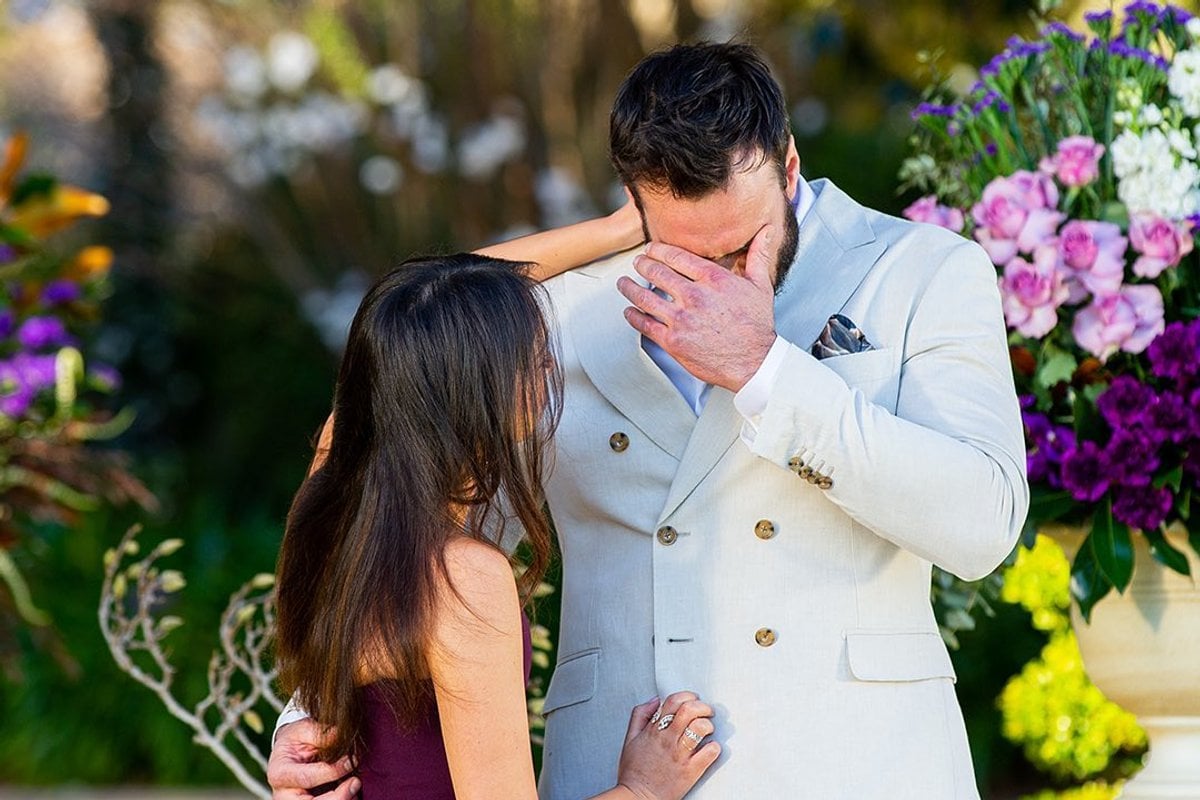 1. So, The Bachelor producers supposedly cut what Bella actually said to Locky when he dumped her.

It's no secret that The Bachelor is carefully cut to tell a very particular story.

So it's really no surprise that Bachie runner up, Bella Varelis missed an accurate edit in the finale.

Maybe because she was a bit too honest to paint the happy ending narrative The Bachelor loves?

According to Megan Pustetto from the So Dramatic! podcast the actual 'dumping' scene was quite different in reality.

“She told Locky that he was a hypocrite, that he lied to her, and had no moral backbone. She also went on a rant about Irena, claiming that she had manipulated and lied to him and lied to the girls the whole time.

“She finished it off by saying that they deserve each other, and that’s when she said, ‘Can I leave now?'”

I’m not entirely sure where to even start... When Locky told me he loved me and couldn’t wait to make me happy for the rest of my life, I believed him and trusted him whole heartedly. We connected on so many levels right from the beginning, some you saw, but most you didn’t. Having three months outside of filming completely changed the aspect of the show, it brought normality to the connection and we grew into what felt like a real relationship. Looking back; I’m proud of myself. I gave it my all, I was true to myself and I wore my heart on my sleeve. Whilst it’s not my fairytale ending, the laughs and the memories will last a lifetime. I want to say thank you to my on-set Bachelor family who were with me up until the very end, thank you for making me laugh through my endless tears that night. To everyone that supported me on this crazy journey, the people out there who don’t even know me but continue to keep the vibes positive and especially the people who got me through a few of the hardest moments, you know who you are, and you’re the real ones. I’m a firm believer that things happen for a reason and now was not my time, I’ll never stop being a hopeless romantic and I’m sure my happily ever after is still out there. Hopefully I don’t need to kiss too many more frogs 🐸✨

2. Apparently Ricki-Lee Coulter is set to replace Delta Goodrem on The Voice Australia.

We already know that the 2021 production of The Voice is going to look a little different next year, following the transition from it being a Channel Nine to a Channel Seven show.

With an all-Aussie judging panel in Channel Seven's sights (to work around the ongoing threat of travel restrictions due to the coronavirus), it looks like Boy George and Kelly Rowland will be kicked off the show altogether.

But whether Delta Goodrem or Guy Sebastian will follow The Voice to new home on Seven is another story itself.

According to Woman's Day, it looks like it's going to be a battle between Ricki-Lee Coulter and Delta for one spot on the panel.

"She (Delta) no doubt wants to be at the helm of the show – she's very passionate about it – but Ricki is in a good spot to replace someone like her," says the insider.

"She would jump at the chance to join The Voice. She's long felt she belongs as a reality coach, but now that The Voice is at Seven she's putting her best foot forward."

3. Elly and Becky Miles were banned from using their phones on The Bachelorette because of Locky’s terrible texting antics.

We can all agree last season of The Bachelor was truly wild. And now, it seems producers have put extra steps in place to make sure that history doesn't repeat itself on The Bachelorette.

Last season, Locky was rumoured to have been texting other women while on the show. An inside source even told New Idea that he had "been sliding into the DMs of several women on Instagram".

To make sure it didn't happen again, Elly and Becky Miles weren't allowed to use their phones while filming, according to the So Dramatic! podcast.

"Producers were scared after what had happened with Locky. They were worried that they would text other guys during filming and there would be even more scandals and spoilers that would bring the franchise undone," an inside source told host Megan Pustetto.

Pustetto also noted that it was unusual that Elly and Becky weren't able to have their phones because usually this rule only applies to the contestants rather than the bachelor or bachelorette.

The pair apparently only got their phones back after the finale, which is why they only recently posted about the show on Instagram.

Crikey, this is actually happening! So bloody lucky to have my best friend right there along with me 👯🥰 @bacheloretteau is coming soon to @channel10au #BacheloretteAU @happylittlebeckymite

The Bachelorette starts Wednesday October 7 at 7:30pm on Channel 10.

4.  Is Bella Cruise trying to send her mum, Nicole Kidman, a message?

It seems Bella Cruise might be trying to send Nicole Kidman a message by liking her mum's Instagram photos.

"Don't get me wrong, Nicole is pleased, but it's come a little out of the blue, given they've barely spoken since Bella was eight," the source claims.

The rumours of a rift between Nicole Kidman and her two eldest children, Bella and Connor, first began when she separated from her former husband Tom Cruise in 2001.

At the time, their kids, who had been raised in the Church of Scientology, chose to stay with their father.

In September last year, Kidman spoke to The Sun about her difficult relationship with Bella and Connor.

“Motherhood is about the journey,” she said. “There are going to be incredible peaks and valleys, whether you are an adopting mother or a birth mother. What a child needs is love.”

“They have made choices to be Scientologists. It’s our job as a parent to always offer unconditional love.”

Bella, who lives a relatively private life, recently shared a rare photo of herself with her 23,000 followers on Instagram last month.

All that glitters is gold.. oh wait, it’s just another Instagram filter

5. From a "unhealthy situation " to a new pregnancy: Inside Mandy Moore's complicated relationship history.

Two years after tying the knot, Mandy Moore and Taylor Goldsmith are expecting their first child together.

The This Is Us actress announced the exciting news in an Instagram post last week, sharing a series of photos of her and Goldsmith looking very happy together as she showed off her baby bump.

The couple married in an intimate backyard wedding at Moore's home in 2018. But their love story actually began three years before that in 2015. And like a lot of relationships these days, it started over social media.

At the time, Moore was finalising her divorce from her ex-husband Ryan Adams and shared a post about Goldsmith's band, Dawes, on Instagram.

"Somehow, Taylor saw it and sent a note to me," Moore later told People.

"We started emailing back and forth, then we went on a date and the rest is history. Thanks Instagram, for helping me meet my fiancé!"

With Goldsmith often on tour, the couple would spend "hours FaceTiming each other".

"We fell in love before we’d even really held hands or kissed or anything. It was great," she told the publication.

You can read their full story over here.