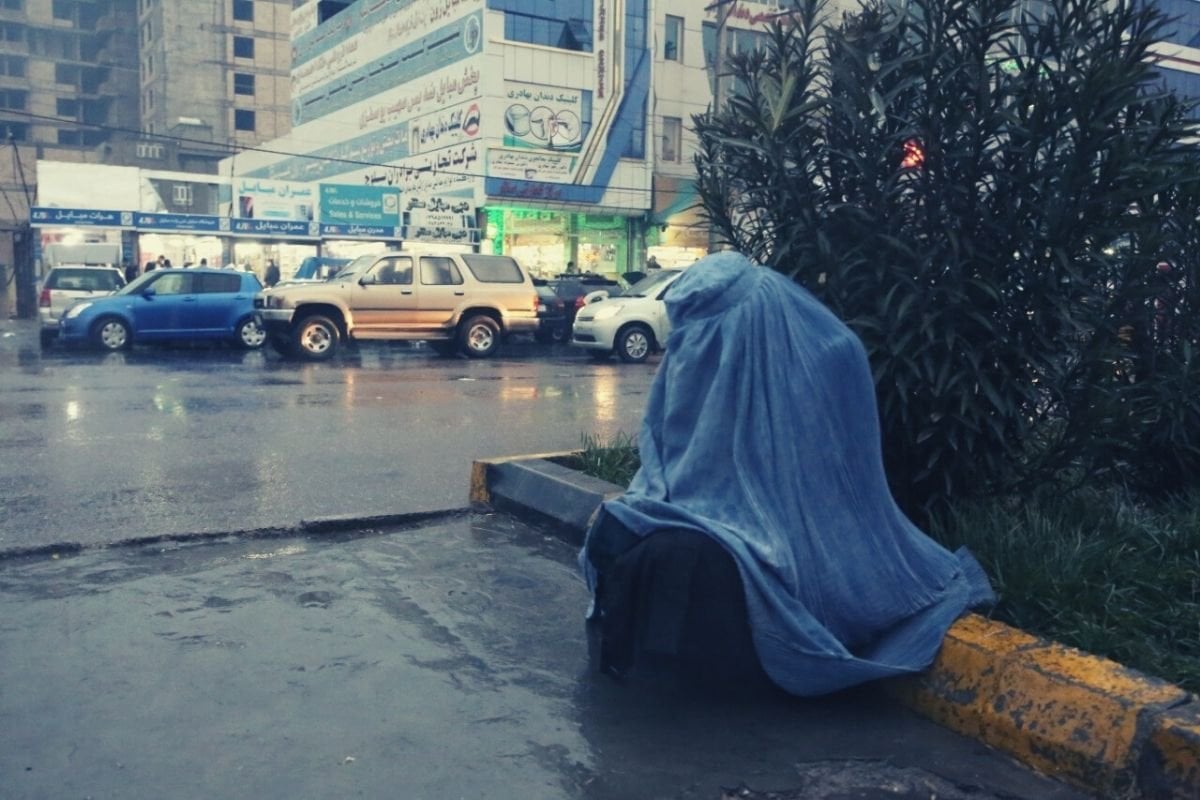 On August 15, 2021, the lives of Afghan women were turned inside out in the worst possible way.

The world watched on in horror as the Taliban took Afghanistan, reinstating themselves and their oppressive, violent, misogynistic regime.

Under their past government, which was overthrown by the US-led invasion in 2001, it was considered a "crime" to be born a woman.

Progress for women once they were gone was slow but steady. In the years after international intervention, many schools opened their doors to girls, and women went back to work. A new constitution for women's rights was created in 2003 and in 2009 the country adopted the Elimination of Violence Against Women (EVAW) law. Women had lives, and futures and dreams. 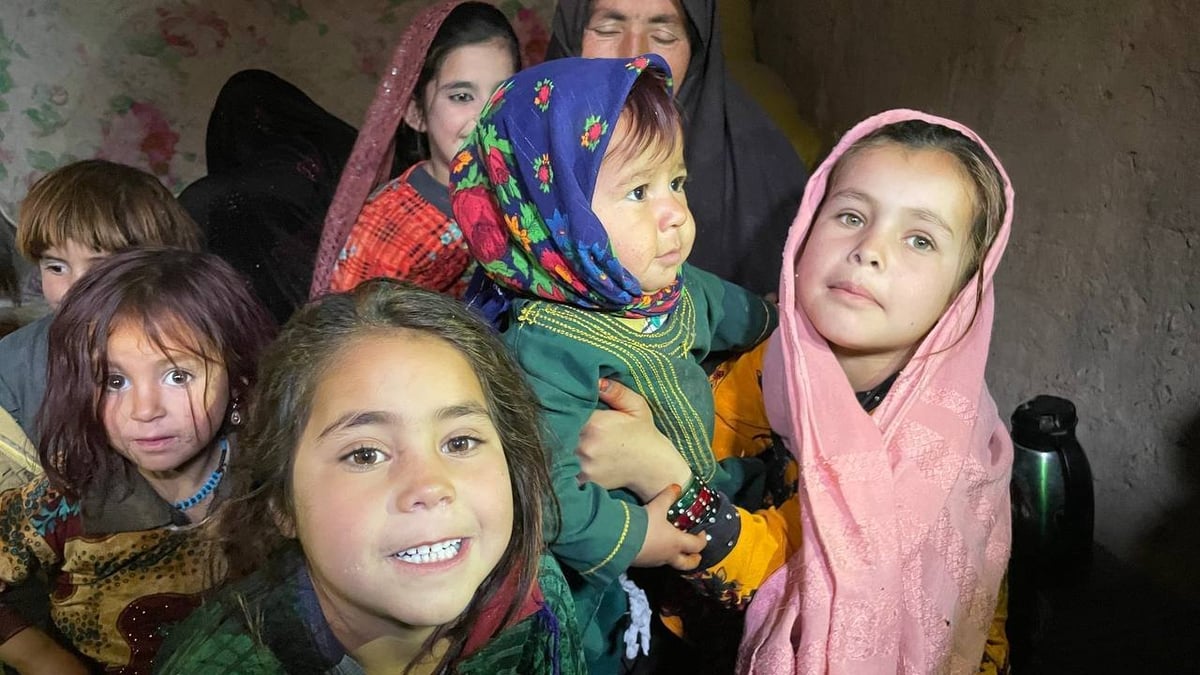 With their return, the Taliban promised they'd be different this time. They promised to write laws to ensure women could participate in public life under their new reign.

But then the world slowly turned away, and the momentum to save the women and girls of Afghanistan lost its gusto.

The Taliban didn't even bother pretending to stick to their word.

"Is misogynist a strong enough term?"

In a video doing the rounds on Twitter, the heads of female mannequins are sawn from their bodies in Herat, Afghanistan.

Local Taliban officials described them as "offensive" to Islam and ordered their removal.

As the Human Rights Watch aptly ask, "is misogynist a strong enough term to describe a group who can't even handle the public presence of inanimate women?"

It's a macabre act to watch, even though they're only women made of plastic - because it's symbolic of the violence being enforced on real flesh and blood women in the same country.

While researching this article, I witnessed acts of violence against women and children that are too horrible to show, let alone describe in any real detail.

Children hung from ceilings by their feet. Women huddled on the floor while being beaten with sticks by groups of men. Women executed in front of crowds for crimes like adultery, promiscuity and "immodest dressing."

All of these acts of horror are available to watch in video form on the internet. The few I have outlined happened in the last week alone.

Even before the Taliban takeover, studies suggested around 87 per cent of girls and women experienced abuse in their lifetimes, but a UN Women report says now that has only increased.

The few services designed to help have deteriorated, with the report stating that "service providers, where they exist, have reported receiving threats and being targeted for their work to support women and girls."

The Taliban's rules for women.

As of this week, women in northern Afghanistan can no longer use communal bathhouses in northern provinces.

It's just the latest oppressive rule to be enforced on Afghan women, with bathhouses representing the only chance for a warm wash for many families during the depths of winter.

In late December, the Taliban ruled that women seeking to travel more than 72km would not be allowed on road transport unless they were accompanied by a close male relative.

Afghan women under the Taliban have no right to leave their homes without a male guardian, travel or work. Afghanistan has become a great prison for her own people. #FreeAfghanistan pic.twitter.com/B9aGpBtRig

In November they were banned from appearing in TV dramas and female journalists were ordered to wear headscarves on screen. Many women in media have already fled the country alongside other educated, prominent women, fearing retribution for their profession.

In September the Taliban effectively banned girls from secondary education in Afghanistan, by ordering high schools to re-open only for boys. They promised that women could still study some subjects at university, however UN Women says this is still not happening. Sending girls to school at all is now being seen as a "dead-end" because there are no subsequent opportunities to study further, and secure work.

A report by UNESCO shows without Taliban rule, female literacy rates nearly doubled in a decade. But women aren't taking the reversal of their right to education lightly, and are still protesting daily.

Today, #afghanistanwomen once again took to the streets of Kabul to demand their rights from the #Taliban regime.

Meanwhile, yesterday the #Taliban arrested seven women who were protesting in Kapisa province for women right to education & work & their condition is still unknown. pic.twitter.com/4Nhf8f9eEc

ABC News reports 120,000 female educators and 14,000 female healthcare workers have not been paid their salaries for the past three months, women's participation in politics has dropped from 28 per cent to zero, and virtually every municipal city job held by women has been re-filled with men.

The acting mayor of Kabul told reporters last year that only women who could not be replaced by men would be allowed to keep working, including some skilled jobs in technical fields, and female public toilet attendants.

"We were contributing economically to our families, now we are stuck in our homes," one woman told the UN Women report.

Women have been banned from playing sport and entering coffee shops, and have had their access to healthcare curtailed by rules that require them to be chaperoned by a man.

They've also been ordered to wear Islamic hijab - although official posters show the much more full-coverage options of the burqa and black chador.

The Taliban have warned women to wear chadors or burqas by distributing these banners in Kabul, and have banned women from attending many places.The Taliban are afraid of Afghan women،Afghan women are fighting a meaningless monster named Talib
And the world is still silent pic.twitter.com/8xKbsQVLiR

The women fighting back.

Millions of Afghans managed to escape the country in the weeks and months after the Taliban takeover, including more than 4000 Afghan refugees who were brought to Australia.

But there are still approximately 14.2 million women stuck there, and over the past five months we've heard horrific reports of the Taliban going door-to-door in search of those on a hit list.

In September the Taliban was accused of shooting dead a pregnant police officer in front of her husband and children. Another former female police officer is being held behind bars, her fate unknown.

Former Police Alia Azizi has been detained by the Taliban for a few months now. Her family still has no information on her whereabouts nor fate.

Where is Alia Azizi? https://t.co/xpbYhYhxFR

They've been accused of killing multiple women's rights activists, including 29-year-old Frozan Safi, who was also an economics lecturer.

The bodies of four women who participated in public protests were found dumped in a pit in November.

A 10-year-old girl was shot dead in December. Her father had worked with the Canadian Armed Forces.

Shocking news: Taliban have entered peoples houses in Kapisa province and pulled out 6 women and took them to unknown place. I got this news yesterday form residents, but didnt published until confirmation, now this Taliban commander confirms. pic.twitter.com/2Z5bmbao4r

But there are also stories of hope coming out of Afghanistan.

Hundreds of Afghan girls and women are continuing to learn via secret online lessons or in hidden makeshift classrooms.

One young woman told the ABC she is about to start a health science degree with the University of the People, a US-based organisation providing online courses to students worldwide who face barriers to higher education.

"It's safer for women like me to study underground," she shared.

One underground teacher told NPR, "We have around 100 students that come in morning and evening batches, and it's all underground... We are doing it all through our network and underground. But I haven't stopped. I can't stop living because somebody else is in power. The other government was corrupt, too, but I couldn't stop - right? - because they were in power or this government is in power. I still have to exist. I still have to continue."

🇦🇫 Hundreds of Afghan girls and women are continuing to learn online and in hidden classrooms, despite Taliban restrictions on education.

Little boys are standing up for their sisters. In September, brothers and classmates of Afghan girls held homemade signs that read things like, "I won't go to school without my sister. I support my sister. We are equal."

After experiencing violence during daytime protests, women are instead writing their demands on walls at night.

"We will not stay silent and will raise our voice," one protester told Business Standard.

"We protest against freedom and justice in every possible way, we defend our human rights, we will not give up the fight for justice and freedom as much as we can. If you close the city roads to us, [we will go] to the walls....if we do not have spray and banner, we write with chalk and charcoal," wrote another female activist online.

The women of Afghanistan are not giving up, and we can't give up on them.

Reply
Upvote
I have known Afghan refugees in Brisbane for twenty years since they were first discriminated against by the Coalition Government. I have never been more disheartened than now , when men who came here  seeking protection for their families have been held in limbo for ten years and more. They have faithfully sent money to support wives, children, extended  family members from what they could earn but have been denied the right to sponsor family and bring about family reunion. Today these good men are on the edge, distraught at the danger their loved ones are in. Tens of thousands of applications sit in the Department of Immigration , waiting for Government leadership to save the lives of family members. This paralysis of morality , of kindness and decency is eating at our souls. The sins of omission must surely weigh heavily on those in the system who know better, who know that most Australians are better than this .
Thank God there are Australians who act- who somehow get support to the widows and children in hiding , destitute and full of fear. Our Government is a disgrace and the Opposition is gutless. Who does not know right from wrong!
M
mb1111 4 months ago

Reply
Upvote
@frederika.steen I always wonder why these men did not take their women and children with them.  How could it be safer to stay there than to leave as a group?
P
pippa 4 months ago

Reply
Upvote
I can’t believe it’s taken this long for the treatment of women under fundamentalist Islam to be written about. It’s less than five years since women in Saudi Arabia have been permitted to drive. At about the same time, they were overjoyed to be elevated to the same status as animals. I’m not kidding, this is the absolute unvarnished truth.
And incidentally, I hope the Taliban haven’t been chopping heads off mannequins. I find it highly unlikely that mannequins exist in Afghanistan. A mannequin is a catwalk model. The store dummies are mannekins.
News
General
Opinion
True Crime
Politics
Sport
Explainer
Entertainment
Celebrity
Reality TV
Movies
TV
Books
Rogue
Royal
Lifestyle
Beauty
Fashion
Weddings
Home
Wellness
Health
Fitness
Travel
Food
Parents
Before The Bump
Pregnancy
Baby
Kids
Teens
School
Parent Opinion
Work & Money
Money
Finance
Career
Lady Startup
Relationships
Sex
Dating
Separation
Friendship
Family
Real Life
Couples