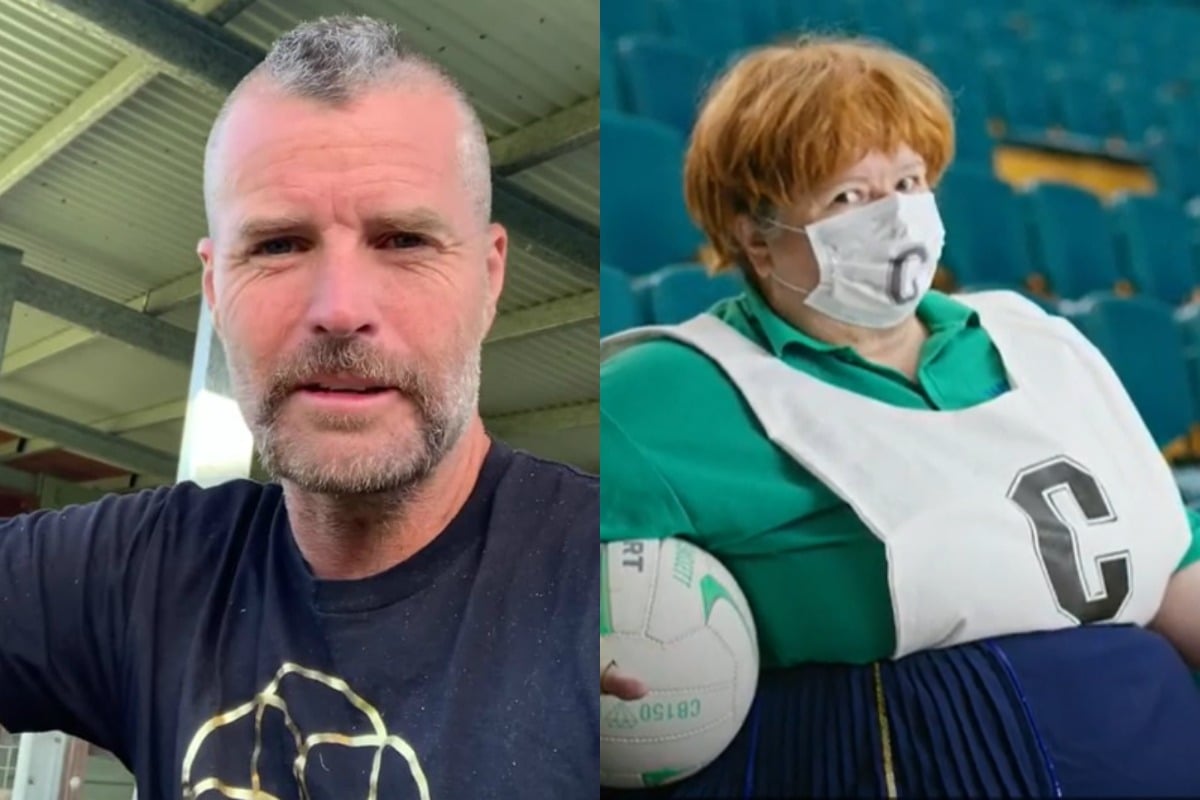 As a collective, there’s nothing that captures our attention quite like a celebrity feud.

Ever since it became taboo to lock two people in an arena and watch them fight to the death in front of a crowd of people and a lion or two, famous feuds have become our answer to the Roman Empire.

Which explains why this week the Australian media and public have been shining a spotlight on an exchange between former My Kitchen Rules judge Pete Evans and actress and comedian Magda Szubanski.

The former TV chef criticised a Victorian government COVID-19 TV ad campaign in which Magda appeared as her iconic Kath and Kim character Sharon Strzelecki, along with other famous Australian faces.

“The most offensive and disgraceful ads I have ever seen in television are circulating in Victoria currently, using a few well-known celebrities,” Pete Evans wrote on his Facebook page to his 1.5 million followers.

"It is so sad to see this type of brainwashing occurring to children and families in that state and have had enough of the lies.

“Enough is enough. Imagine if they actually wanted to help people get healthy....how would an ad like that look and sound? Let’s give it a try shall we....Spread love, be free, eat anti inflammatory healthy food, hug each other, play, sing, get outdoors, get your hands into the soil, meditate, dance, connect to nature and build a healthy immune system and protect and help the vulnerable with the best of what we know works.”

His words were accompanied by an image of Magda Szubanski in the government ad, in a post that has since garnered 689 comments, 233 shares and thousands of reactions on Facebook.

Magda then responded to the post by saying, “Frankly I am sick to f**king death of skinny people (yes Pete Evans and your followers) assuming they are morally and spiritually superior,” via her Twitter account.

Frankly I am sick to fucking death of skinny people (yes Pete Evans and your followers) assuming they are morally and spiritually superior pic.twitter.com/K5Wn4TFyOL

At first glance, it would be easier to write off this public exchange as just another celebrity feud. An added page to a book that already includes everyone from Taylor Swift and Kanye West to Lady Gaga and Madonna to Piers Morgan and… pretty much everyone.

But the messaging around this conversation boils down to so much more than just angry words and famous faces.

Despite his later statement that the post in question had nothing to do specifically with Magda Szubanski, and that he has always "loved Magda as an artist", there's no doubt that Pete's words laid the groundwork for a dangerous public conversation to take place.

A conversation that has developed past questioning the message of the ad and veered into a toxic launchpad for body shaming.

The danger here is not that Pete Evans shared a controversial opinion or encouraged his followers to steer away from public health information. Posts like that across his Facebook page are as common as aggressive seagulls on a summer beach day.

It's that it only took the sharing of two details, the line "i﻿magine if they actually wanted to help people get healthy....how would an ad like that look and sound?' accompanied by a picture of Magda, instead of Waleed Aly, Tayla Harris, Shane Jacobson or any of the other media personalities featured in the ad, to set off a slew of abuse.

That's how primed many people in Australia are to attack and exclude the voices of people they believe to be overweight, and therefore unhealthy.

It's a reminder that even the slightest flame can ignite a firestorm of judgment masked as a health concern.

As Magda, herself wrote in her Twitter thread: “Fatshaming me and assertion that fat people have no place in discussion about public health not only insults me but also all the fat nurses, doctors, ambos etc who give so much."

A large number of the comments shared by the public on Pete Evans' Facebook post, which in many cases are too abusive to share here in full, bypass discussing the message within the government-sanctioned ad. Instead, they move instantly to saying that someone who looks like Magda has no place within any health-orientated conversation.

The comedian, actress and best-selling author is labelled 'a pig' and 'a cow' while every aspect of her body and health are ridiculed, and not just in some dark corner of the internet.

The conversation was being had by people who are happy for their derogatory comments to sit alongside their full names and images of them and their smiling families.

#fatshaming me & assertion that fat people have no place in discussion about public health not only insults me but also all the fat nurses, doctors, ambos etc who give so much. My Polish gran was fat & a nurse & she risked her life to hide Jews from the Nazis #fattiesunite 🙏🏻❤️ pic.twitter.com/RhFQ4BYV0K

It's a sign that toxic online health culture has been normalised to such an extent that viewing someone else's body as overweight now also doubles as a get out of jail free card when it comes to inappropriate public discourse.

But the real issue here is that the fallout from this convention stretches so much further than Pete Evans' Facebook page.

Conversations like this are why plus-size bodies are publicly mocked and reviled every time someone like Tess Holliday appears on a magazine cover.

Why brands can be hesitant to align themselves with plus-size influencers or personalities, fearful that body targeted abuse will overwhelm their comments.

And it's why so many people in Australia, women in particular, do not always seek medical care and advice when they need it. So ingrained in them is the knowledge that a plus-size body will automatically trump any other concerns and opinions.

The conversation around Pete Evans and Magda Szubanski might be playing out in the public eye, but it's how we approach it on a personal level that will make all the difference.

Reply
Upvote
4 upvotes
Get some help Pete and mind your own business....
G
gu3st 2 years ago

Reply
Upvote
10 upvotes
This doing the rounds of FB:
I used to be the head of an international cabal orchestrating the largest conspiracy ever known, implicating scientists, doctors and leaders all over the world - and it almost worked but then a disgraced celebrity chef saw the whole thing coming.
F
freaky 2 years ago